I Really Should Be...

... in the basement doing laundry. But i have news. News that means oh so very much to me. Some of you guys might not care, but i have been waiting years and years for this.

Kate Bush is releasing a new album. A double cd. It is due out in the US on the 7th (or the 8th, depending on the source). It's called Aerial. I am so excited i am freaked. She was my first ever crush.... and i just adore her still.

Just yesterday on the car ride home, (e:Uncutsaniflush) and i were talking about the ongoing and constant rumours that Kate Bush is releasing a new album and i am so not holding my breath... that if i beleived all the rumours, i would be at the record store every other week. But now, from a tiny bit in Rollingstone i read last night, i see the news and check out her official site

Tomorrow morning, we are off to Knoxville. I am very much looking forward to it.

Seeing good friends. I am already obligated to do 1 haircut... I am charging my clippers as i write this, Christopher! Our friend, Linda had a new furry addition to her family that i am looking forward to meeting almost as much as i am looking forward to seeing Linda again! Expect pics of that, (e:peeps)! I am happy we have been able to keep in contact with some friends, but sadened that there is one we have lost... of not fault of anyone's, really, but just how life goes.

Eating at yummy places i miss. Great mexican in Knoxville! El Charro, here we come. And the tofu on the Mandarin House lunch buffet is sooo good. And Kaya (Korean) has some great tofu, too. I miss the waitress there, she is such a sweetheart. She told us not to move up here... "too much snow". Turned out she lived in upstate New York for years before moving to Knoxville.

I really want to visit the Knoxville Zoo

this time. Last time, we didn't have the chance. This time, for sure!

I was in a rare mood to go for a hike today. The weather seemed good for it... it was sunny and warm, but windy. By the time i showered and got ready, it was threatening a thunderstorm. It was really windy at Tffit, but we didn't get rained on. Thanks to (e:Paul) and (e:Matthew), i felt inspired to take pics... 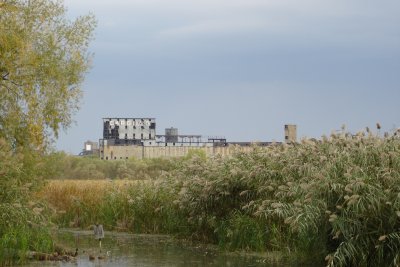 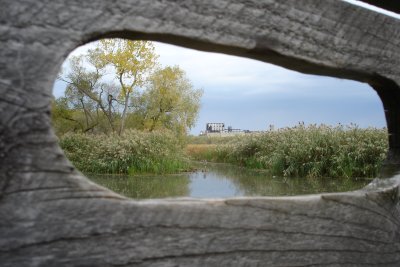 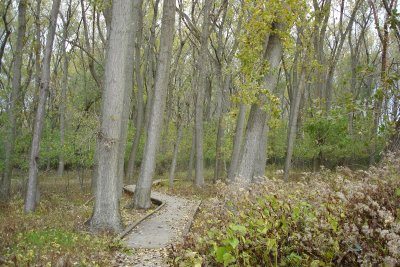 I have to go to the dentist again tomorrow. I even tried to go today. Sadly, no openings for me today. Another day of naproxen and generic orajel. I have a damn tooth that bothered me all weekend long. I thought it was the tooth that was filled last time i was at the dentist, but i am now thinking it is the one right beside it that also needs to be filled. I often have pain for weeks after a tooth is filled, worse than before it was filled, and it feels so much like a cavity, that i just assumed that is what it was this time, too. But alas, i do not think so now. I hope filling this damn tooth will make it feel better!!

Ok, if you can get it, try to get a job working for the Canadian Consolate... 1 HSBC Center, Suite 3000. They are only open from 8am to 11am, Monday to Friday. Nice, eh? Bet they make a crap load of money, too.

Seems we were able to get stuff done without them anyway. We are going to try to download the Canadain Passport Application Forms i need, and we found a photographer that was able to do Canadian Passport pics.

I was impressed... the guy didn't use a tripod, and with one snap, on his digiatal camera screen was a decent pic. Not great, it still looks slightly like a mugshot. He even cropped another set for me for the picture for my green card. So i will have the same pic for both. And now we don't have to go back again. Hopefully, my passport won't take too long so when i go to the INS Service Center, i won't have different coloured hair. I need to be good for a month or so. *pout*

When waiting on hold, some places have good music, others do not. The INS has really really bad music. I would rather listen to Muzak. But, i only had to listen to it for about 20 minutes. Record time. And the guy i spoke to was helpful. Even if he didn't quite understand my concerns.

OK, so i worry too much about this green card stuff. I just didn't want the Buffalo Service Center to wonder why i got a letter dated the 7th of October and didn't come in to get my new green card application processed until 4, 6 or even 8 weeks later. He just told me to explain to them that i wanted to have a travel endorsement in my passport, but i needed to renew it beforehand since the green card won't arrive for another 6 months and the passport expires in a month. He alos told me to continue using my current documents but to have the letter i got and my almost expired passport with me... seems everything is computerized and it would be hard to explain why i was using old documents when i have been approved for the new ones. Is this confusing to everyone? Funny that it isn't to me anymore. I mean, i know what a alien registration receipt card (Form I-551) is. I can use the lingo...

A big thanks to (e:Ladycroft) for her Congrats and (e:Paul) for welcoming me to his country!!

I am sure more is going on right now. But my mom needed to get the old folks that are myself and (e:Uncutsaniflush) home... we need our rest at this age.

(e:Ladycroft) gets the night started out just fine with her two fisted drinking methods that are envied by all. 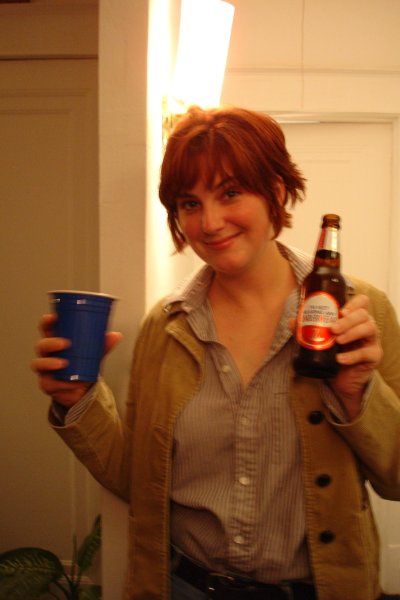 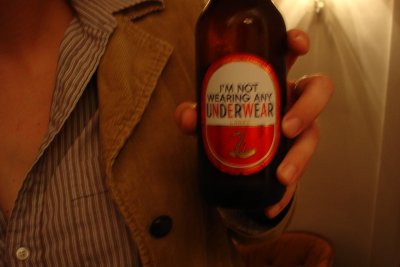 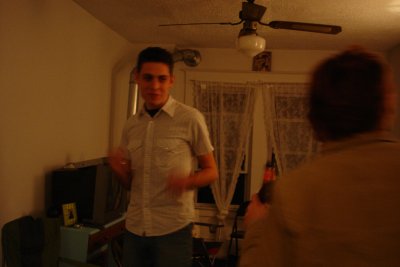 No evening would be complete without some sort of tall tale from everyones favorite story teller, (e:Terry). As you can see, (e:Joshua) can barely believe what he is hearing! 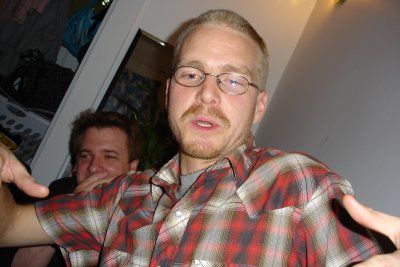 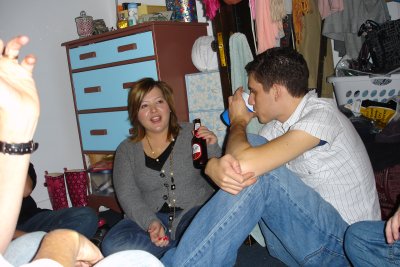 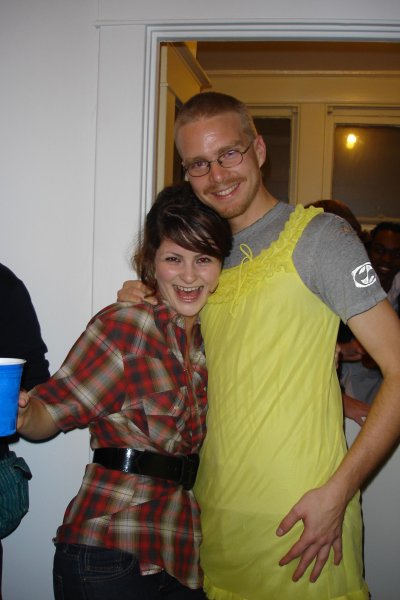 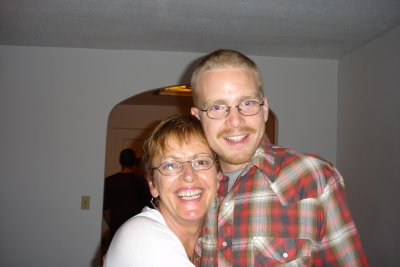 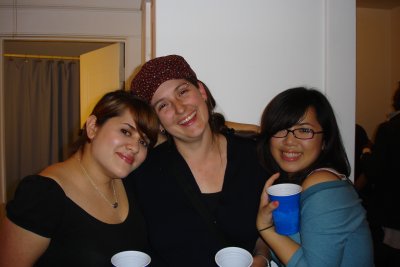 and here they are, last but not least, the birthday girls, (e:lilho) and (e:Tina) 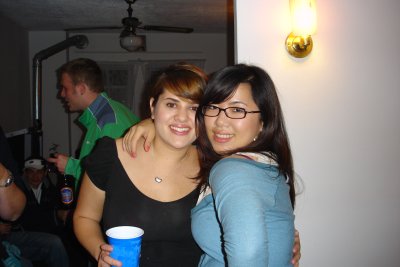 Thanks for the invite, (e:lilho). We really appreciate it and the warm welcome you gave my mom.

I love Halloween. That doesn't necessarily mean i love to get dressed up in weird clothes or spend time giving out candy. I just like the cool stuff i can get at the stores this time of year. I guess there is a part of me that is still and always will be a goth chick. I love black clothes with blood red accents and celtic crosses and gravestone markers and cemtetaries in general... and, of course, gargoyles. I love them.

I have one in our foyer. I call him Gary. Here he is. 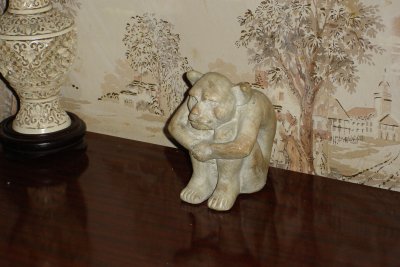 The other day, (e:Uncutsaniflush) and i were at Target and i saw the cutest most adorable gargoyle. He was the only one left on the shelf and i just had to take him home. But i can't think of a name for him. And i am just wack enough that i need to name inanimate objects. Anyone have any suggestions? Here he is.. 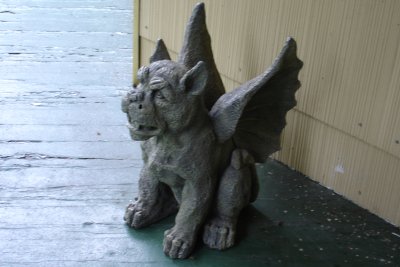 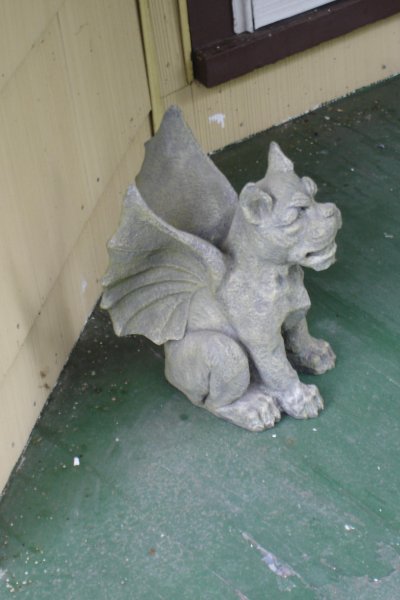 We are going to Cleveland tomorrow... we were trying to think of somewhere neither myself or (e:Uncutsaniflush) had been before that wasn't too far of a drive. Cleveland won. I wonder if Devo is in the Rock and Roll Hall of Fame? We read they have a nice zoo there, too, but that the art gallery we wanted to go to is closed for renos. Oh well. Maybe next time?

Heard from 2 good friends today. Our friend Chris will be able to visit with us when we head on down to Knoxville later this month! Yay! Last time was last minute and we didn't have as much of a chance as we all would have liked. I think he missed some cherished morning sleep to meet us for breakfast. Ah, true friendship! When talking to (e:Uncutsaniflush), Chris mentioned something interesting. Since he comes here to read our journals, he has an idea of what is going on in our lives and is less likely to contact us... But, damnit, he doesn't have a journal or a blog! Maybe we need to set one up for him so we know what is going on in his life?

I also heard from my friend Mark. Mark met a girl online that, at this early stage, he is conisdering marrying so she can go and live with him in Toronto. Wow. Now, most people might not think that would be that big a deal. But Mark was married once upon a time. And not really because he wanted to get married, he was just young and foolish and he thought his jealous girlfriend would be more secure if they were married. It ended badly. Back in the late '80's. Since, he has had a total of 1 serious relationship, and not really all that serious, even though they lived together. Now, a girl from Montana somewhere... He is a wonderful person and i love him dearly and i want him to be happy. I just do not want to see him get hurt. I told him to at least meet her once beforehand...

(E:Uncutsaniflush) and i met the one time before deciding to get married. And it's almost been 4 years. Wow.