After "wasting a weekend" I actually feel a bit refreshed. My body thanks me for not abusing it. I did manage to do a couple of things in regards to school. Plus my final project in my MBA class isn't going to be as bad as initially thought. Hopefully I'll polish it off tomorrow.

Although I did enjoy sleeping and doing not much of anything I just feel "that time of year" coming on. It'll be dark before 5 now with being back on standard time. I just can feel the chemicals changing in my brain in about 2 weeks from all of the darkness that we are going to be abundantly surrounded by.

There is an upside. The winter months bring the two great pastimes into play, drinking and sex. Since you have to have someone with you in your bed to keep you warm in the winter.

I came across an album cover from the guy from Deep Purple Ian Gillan. I didn't know he recorded his last release a double album here in Buffalo. It's just after looking at it reminded me of the fun times that can happen in winter and it just came over me. Yea it was the thoughts of sex and drinking but it's that building that is his "Inn" that maybe did it for me and not winter itself. 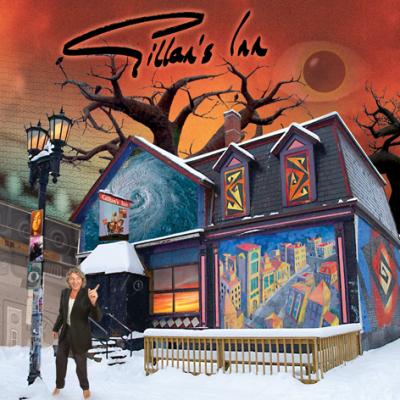 Not Much going on here

It actually is a pretty slow morning here at work. So coming in at 7:30 just seemed like a waste until I witnessed the beautiful sunrise this morning after I was woken up by the thunder and lightning. I snapped a few pics of the "Red Sky in the Morning, it was breathtaking and one of those moments I felt good to be alive. Then on my way from my "secret parking spot" to work about a 2 block walk I pretty much was drenched by the downpour. I guess you have to take the good with the bad.

On another note I guess I'm another (e:strip)er with a B-day in October. Although by subconscious plan or circumstance it ends up as a low key event. This year I'm getting a room @ the Best Western and plan on hitting every bar from Prespa to Hardware on Allen. At least that is the game plan so far, I could always get that quick gambling junket to Foxwoods or Vegas that my parents haven't told me about yet.

Early A.M. and I just didn't want to get up this morning. Woke up @ 6:30am and given my commute time that made me 15 minutes late. It was just so nice to get that really deep sleep but hey I have to come in and feed peoples poker addiction.

I should have not watched that VH1 Behind the Music episode about Pantera last night. WOW is all I can say. I remember them about 13 years ago now when they opened up for White Zombie @ the CT St. Armory. A part of me sometimes wishes that I could go back to the early 90's and really savor the music live at the time. Actually if I remember correctly White Zombie did outsell them in T-Shirts.

It just reminded me that there really isn't anything all that strikes such a chord with me musically. I would hate to be a kid today given the state of corporate music. If I was young and angstful again what would I listen to? Things are just so micro specialized. Y

If I was a teenager, depressed, full of volitile emotion; What would I listen to? That kid of music @ the time Pantera, Alice in Chains, Helmet and heavy industrial music was the soundtrack to me and my friends walking up and down elmwood drinking out 40oz's underage and other stuff while we were going to those shows.

Would Simple Plan provide the same effect??? I doubt it.


Oh, and I shouldn't have talked with M* so late on the phone as well.

OK, back to work. Nothing like throwing out random thoughts...

I think there still is definitely some good music out there, but I think you have to look out there beyond what you see on MTV or hear on much of the radio. I don't remember the heavy metal days too much... mostly more the whole grunge era with Nirvana, Pearl Jam, Smashing Pumpkins, etc. That was kind of the soundtrack for us back when I was 13 or 14.

Looking back at it now, I don't think it sounds nearly as good as it did then.

Not sure who you would listen to but here are a few bands that you might listen to or listened to:

There are a lot of bands to listen to that are heavy I just have no idea who they are cause I never get a chance to watch any Metal Video shows or listen to Metal on Music Choice.

Usually when I am in one I stay away from (e:strip) for the fear that my down emotion will be contagious and bring people down. That's why I have another blog in another place.

My Ex always said to me to find joy in really pointless stupid things.

So here is a pic I took last week when I was tearing up Allen and Delaware on Thursday: 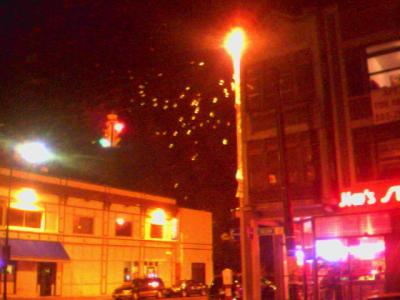 I will admit that is right in my hood and I have never seen that before. I guess the few times I have gone by there it wasn't going on interesting and thanks for sharing.

haha, everytime I go by allen that guy is blowing bubbles from above Jim's Steak Out!

glad to be back

Finally joined the 21st century and got high speed Internet. It was a real pain in the ass to get everything installed. The whole process took about an hour and a half. My house is a freaking mess and stuck in the 1970's. So he had to drill a hole from the outside :-/

This is really nothing to compared to the raw emotion I am still reeling from right now. My conscience got the best of me and I had to tell someone something. I'm not too sure if they will ever speak to me again, and I really can't blame them it they never do.

Just what the hell am I doing with my IRL friends lately? I am either breaking it off with them or doing something incredibly stupid to force the issue into default.

Could it be that the universe is telling me to just pick up my roots and get out of town?

maybe time to make new ones. you can call to hang out whenever :)

I have thought about this a lot of times. I think that Buffalo is a small town and I need to get out in order to meet new people. Then I go to some giant event like taste of buffalo or or the artvoice fest and I realize that there are hundreds of thousands of people I don't know, right here in town. Changing jobs or apartments/houses can be as socially invigorating as canging cities. I guess that doesn't help the weather or get rid of the old friends though.