Bottled Michelob was originally sold in a uniquely-shaped bottle named the teardrop bottle because it resembled a water droplet. The teardrop bottle was awarded a medal from the Institute of Design in 1962. Five years later the bottle was redesigned for efficiency in the production line, and later it was abandoned for a standard bottle.

In January 2007 Anheuser-Busch re-introduced Michelob in a similar bottle. 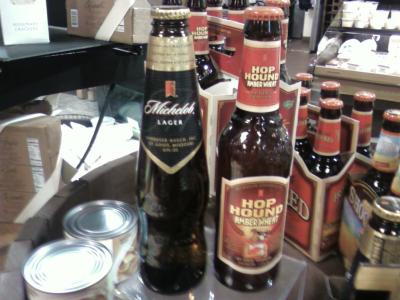 I would hate to see it go. Yea, you can't drink Michelob all the time since it is on par with drinking whole milk all the time, but it is the one things that makes it stand out more than the beer itself. Especially since I'm old enough to remember the Frank Sinatra commercials selling the stuff.

For it to just have it fall back into the pack of the other supposed "craft beers" that the have thrown under the Michelob flag would be a mistake. I love the teardrop bottle & I'm going to be sad to see it go.

I remember drinking a 6 pack over Christmas this year when I was down in Sarasota. I guess the positive trial markets indicated that they could make a go of it. With the revitalization of Pabst Blue Ribbon I don't see why they wouldn't parlay that success into another emotionally nostalgic brand. Plus as I remember it was actually pretty good. I did buy some of the "new" formula over the spring when I went down to Virginia and although it's great to complement a picnic, it just wasn't as good as the original stuff I had in Sarasota. 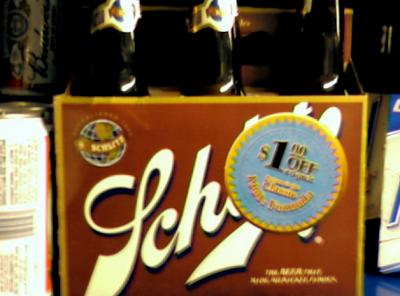 It's not entirely about the beer. For older people it's about nostalgia, for people like me or younger it's about communion with older long passed on relatives or better simpler times. Then again it could just be that people won't be able to afford beer brewed by microbreweries with no bargaining power for key ingredients due to their diminished economies of scale or beer imported from a country with a stronger currency. I think that's why the foreign brewers bought out the domestic macro breweries, so we can be the "cheap foreign labor" for their brands as we do for our children's toys and clothes from southeast Asia.

I think it was Cheech and Chong who said it best "When you are out of bud, tough schlitz."

It is kind of funny that the last real American mega brewer is going to be gobbled up by foreigners.

Although they are right in that no one really drinks "American" beer anymore unless it is light or low-carb, it does bring a significant end of an era. The consolidation of the 70's and 80's are going to leave us without a true national brew. Miller is South African & Coors is 1/2 Canadian. Really the only beer large scale national company will be Pabst and their collection of brands of yesteryear. Yea, they tried to do this when they bought Rolling Rock, but in doing so they did alienate the drinkers of the brand. Come one I drank to because it came from Latrobe, PA, not New Jersey where it originates now.

Yea, I do always find an appreciation for Michelob, but the real stuff is hard to find without light or ultra on the bottle. Then again I a friend of mine compared it to whole milk, "It's good when you have it, but you just can't drink it everyday."

it was Bud's fault for never really branching out. They could have bought out the smaller old man beers, but they only came up with brew products that never went anywhere. L.A. Beer, Bud Dry, Ice Draft (although I do miss Bud Ice Draft)

There is only real one weird thing in my mind. Is Busch going to survive Bud? I mean when Schlitz when faded away in the 1980's after people stopped drinking it, the secondary brand "Old Milwaukee" survived & is actually still thriving today. Actually Old Milwaukee is the best selling brand for Pabst. The only thing I can think of is that there are still a bunch of guys still thinking of this commercial: the ultimate misogynist beer as sex commercial ever!

To me what is even more amazing is all of the major breweries in Canada have foreign ownership. Molson and Coors are one (as you mentioned). Labatt is owned by the Belgian InBev SA. And most surprising to me personally, Sleemans is owned by Japan's Sapparo.

These three companies are partners in the province-sponsored "Beer Store" formerly known as "Brewers Retail".

So on my day off today all I really accomplished was just a beer scouting mission. After picking doing some light shopping at the Galleria I ended up checking out the Willowbrook Beverage Center. I was pleasantly surprised. What blew me away was the fact that it is the first place in this area that carried ALL the POLISH BEERS that I have first hand knowledge to exist!!!No more driving over to Canada to pick up a sixer of &#379;ywiec, Okocim or Tyskie. The other aspect of the place that blew me away was that they stocked 6 packs of Stroh's in bottled!!! This has to be the first time in a very long time in which I seen those somewhere. To me finding good old man beer is more of an event that stumbling across some gimmicky overstimulating microbrew.

So on that train of though I then paid a visit to the Village Beer Merchant. As (e:jason) & (e:josh) have said in earlier posts, I do give a 2 thumbs up on the place. As my personal taste goes I will probably not drink 90% of the items that they have in stock. I only say that because there is a soft spot in my heart for India Pale Ale and they do have a ton of it. It's just that most of the other selections just aren't my thing. I don't need to pay $12 for a 6 pack of something with a quirky name that is dark and pours like syrup, just to show my friends that, "I know beer." It was funny because when I was in the store there was a guy that was almost a douchebag with some kind of obnoxious girlfriend giving their $.02 cents on everything in stock. The funniest was that they were "going to buy every last bottle" of something called Arrogant Ale!!! I shit you not & laughing about it.

What is going to get me back there is the stocking of Czechvar, OK that's what they call it in this country, but if it was back in Eastern Europe it's really Budweiser Budvar 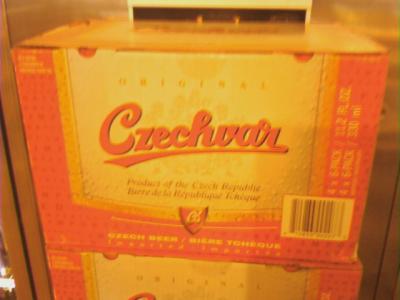 I will gladly pay $40 for a case of this stuff. I remember the last time I went over to Poland and had this stuff for the first time it basically took me to another place in a very good way. So thank you Village Beer Merchant for bringing me the O.G. Budweiser from the Old Country "Source." I just find it ironic that AB actually imports & distributes it for their distant relatives even though they are still in that decades long copyright dispute.

Other than that I am actually happy that I can pick up some Boar's Head lunch meat for my lunches. It was kind of funny when the guy behind the Deli asked me if I ever had the Boar's Head Liverwurst. I smiled and said, "Yes, It was my favorite when I would go down to Florida." So in an odd way I may go there for the deli meats first & then the beer!

you know, i just got gas at the mobil on forest/elmwood, and was actually amazed by their beer selection. a lot of the bigger 'micro' brews- ellicottville blueberry, magic hat, blue moon... I picked up "Rising Moon", a new seasonal blue moon.

Well done! There are many specialty beers there, and I do think that much of it is overpriced (the Bernardus 12 Jason loves is like 2-3 bucks more at the VBM than it is at Consumer's!) but overall, I suppose if the difference is a buck and I don't have to burn gasoline in a car to get it otherwise I'll still buy it from VBM. Still though, they carry a $16 4-pack of canned beer. Look, I know that drinking that fucking trash PBR is mandatory if you want your hipster membership card punched, but having supposedly elite beer in a can is a mind-boggling travesty - I'll never try it. There is too much good stuff in bottles or on tap to bother.

The fella in there usually (dark, short hair, beard, hipsteresque) knows his shit about beer, but at a point it can get a little snooty and ultimately either you like the beer or you don't - few people rhapsodize about the beer they drink. By my own estimation I've probably never tried about 3/4 of their stock, so for me thats an attractive thing to consider when I'm trolling for a sixer. I can walk there, which is nice. Wilson Farms actually carries a respectable stock, but until now I've always had to go to Weg, Consumers or Premier if I wanted to try something different.

I've never tried the authentic budweis! I must have glossed over that when I was there last. I just got my tax return - time to spend a little of it on flashy booze!

Holy crap, liverwurst! I haven't heard anyone talk about that in ages. It was mandatory to eat it when going over to my Gramma's house.