Transmission was a pretty good time on Saturday. I ended up running into a couple of surprising people that I just didn't expect to see. In all it was just good to be able to go out and surprisingly run into people. In all that was just a great lift. Being able to dance my ass off to the music of Morrissey and Johnny Marr with once a while sticking on the floor for the Cure was just a blast. I don't think I have exerted myself like that in months. I need to do more of that if I want to get back into "game shape."


Other than that my school schedule is a bit calmer at the moment thanks to the end Stats. The only thing that ties me up is my Monday night class. This is a bit of a problem since I am just feeling the need to go back to Vegas very soon. I just don't know what it is about that place but I just feel drawn to it. I was looking at flights earlier tonight when I was finished with my class and even a 3 day bender is looking really good if I can get the right price on airfare which seems pretty close to impossible these days.

That and I just don't know what is going on with T* we hung out for a bit @ transmission but for some reason I just got a weird vibe. I guess that's what happens when $ comes into play for things I can't really discuss. At this point I'm just looking at it as an acid test, if things get reallly dicy then it may be time to just cut my losses. As Wall St says, "There's always a bull market somewhere."

Other than that I'm just really excited that I secured myself soem tickets fo all the sessions of the NCAA tournament coming to town in 2.5 weeks. I can't wait to see my friends from Virginia that are coming up for the national spotlight event.

I'm just feeling a bit alive again. I spent most of the weekend in bed moping around and just not able to get motivated to do anything. Finally I think I may have snapped out of whatever was slowing me down.

Then again it just may be the realization that I am geting back a fat return and a new Desktop may be in immediate order. Basically I have come to the conculusion that I woudl prefer a Apple Desktop and a cheap ass PC laptop. Originally I was going to do it the other way around but since I'm getting all the money I paid back I can easilly afford an Apple. Life is way too short I might was well enjoy it.

Yea, I almost missed it but I just caught it as I was hitting the post button. I've been on (e:strip) for exactly 1 year!!! Wow, I can't believe it has been that long. It seems like that span of time really brought quite a bit of changes. Honestly, I have to say more so than I have experience in past years.

Here's to excellerated change for the first time in many many years in my life. Heck, it hasn't been pleasant but at least time has felt like it has been flowing instead of beign sedatary.

Firstly congratulations on the 1 Year mark. I have never been to Vegas so I don't know what the draw is. Maybe how the city looks all lit up in the dark, or maybe it is the "Bunny Ranch". Have fun at the NCAA's I have heard it is a great time. I watch what I have time for of the turnament on TV.

I'm heading out tonight to the Transmission Dance Party. It's The Smiths v. The Cure the best one of the year musically. Yea I'm going to be the oldest guy in the place but it's Moz v. Robert Smith...

As I was driving home this afternoon I found Randi Rhodes on AM 1520 much to my surpise! What a brilliant move as she was the only show worth listening to 1270 when it was the local Air America affiliate.

my 1 good deed of the day

I took today off to study for my first audit exam. After exhausting the study areas @ school I decided to go the my local starbucks in N.F. across from the Casino. After about a half hour, bad loud music, creepy NYC Real Esate types I decided to go to Dunkin' instead and stock up.

I was slightly delayed by a nice family that definantly was not from around here. A nice midwestern looking couple with 4 kids I would say 6,4,3 and 18months and all with blonde hair. The nice wife asked me where the aquarium was and I told her down the street (Rt. 62) to the leftish when the road ends.

I hope their minivan made it OK through Little Italy and it was actually open. All I can say is good think I was buying my 24 oz coffee since the girl behind the counter didn't have a clue where the aquarium was. Heck I'm almost positive that most of the people workiing in Niagara Falls don't have a clue about anything, especially the only semi-family tourist attraction. Given there's only one thing to do in this city and that's just to "blow your brians out" at a second rate indian casino.

Ok back to studying...

I was just browsing the Web when I found this article

about a car filled with "Mountains of Trash"

Then I remembered I took this pic in Lewiston about 2 months ago when I parked next to this Mini Van in the plaza next to the Orange Cat Coffee Co. 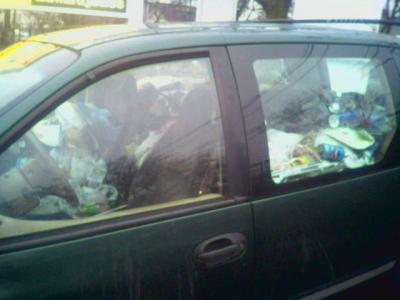 How can people drive in such filth and how in the F do they let their vehicles get to that point? Yes, I can get sloppy at home but I always keep my car's contents to a minimum. What if something broke down in any of these cars and a mechanic needed to get in and fix something?

omg! remember me bitching about my co-worker being a filthy pig? THIS is exactly what her car looks like!!! AND her work space!

Ive seen this car! A month ago, atleast. I had a bunch of errands in Lewiston, so I parked in the general area and then walked to all of them. As I walked down Center towards Orange Cat, I saw it in probably the same place as you did; in the plaza by the side walk. I wondered how.. anyone.. could drive like that. I vowed on the spot to never let mine get that bad, not that it would- but its been clean ever since.

I have never seen a car filled with that much junk. It makes me wonder if it smells.

Hey my car's not that bad. ;) Admittedly, it's getting there, but there's still hope!

What is up with the "The Least Emperor References???"

One of my favorite movies of all time.

The last movie with the "cast of thousands!!!

as they make their album, each song's video will be portrayed as a short film. the first release being 'the shining'.

I have seen that arrow hall show listed also as missaguga depends on what concert listing you go by.

I have never seen that movie. But I love the video and the song. If I knew what the song was about it might tie in to the video or the movie. But nothing wrong with a video in a palace with sord fighting filmed as if it is an epic martial arts movie. On a side note if you like them I forget the dates but they are playing 3 days in a row in Ontario. Granted I don't know ontario well enough to know where the towns are but one of them is Missagua.

I can breath now

I can finally take a breather. I just handed in Exam #1 of this stats class. Only 1 more week and an exam and hopefully I wont' have to deal with another Hyposthesis Test or an ANOVA for a while.

Other than that I'm just been pretty boring. Working early trying to stay healthy and sane the usual.

(e:ingrid), I think that the feb 14th conundrum is the usual "spending Valentines alone" affliction that a statistically significant number of (e:peeps) seem to suffer from. But if (e:vincent) is referring to something else, your guess is as good as mine.

I've noticed that pretty much every day that I"m here it is 90% of the same group of people here everyday. Given I work in the Poker Room and it is a bit differentl than the regular casino floor. Where people just dump their money. Poker is more of a grind.

There are these guys playing the "Big Game" that were here last evening are are still here playing the same game. Given these guys have $8,000-$12,000 in front of them at the moment but still there is more to life than a big poker game.

I went over to Fallsview last night with my Dad to use up all of this remaining comp dollars for the month playing slots. I ended up just blowing $60 or the equilevant of the meal myself. I just find that place too sterile "vegas stripish" If I want to go to Mandalay Bay I'll go to Vegas and hit the real thing.

The highlight on the night was talking to M* a cocktail waitress over there that used to come into our poker room. From what she told me she is staying away until the next Ladies Only tournament in 2 weeks. I'm just blown away to hear that a cocktail waitress has taken too much of a hit from a casino that she has to totally bar herself from coming. We know better from watching degenerates "blow their brains out" on a daily basis to get sucked into it.

Then what do I know, I was just stoked to be talking to someone like her and have her actually wanting to converse back. Then reality hit as she was being pulled 3 or 4 different directions of people needing drinks.

It's strange to actually be part of this casino "scene" and have that casual commardary going on with the people across the ditch. They come to our place and we go over to theirs since we can't gamble at the place that we get our W-2's from.