Ok here is where things currently stand. I was assuming that getting a 4th person meant that it was someone other than (e:mrmike) (e:janelle) and myself. (e:mrmike) indicated that he wanted another ticket and that would have made 4 total. If (e:janelle) drops out than I guess there's 1 floating out there. (e:metalpeter) weren't you interested in going?

I'm sorry for all of this miscommunication. I'll try to call the Bisons today and see if they can grab the envolope before it gets mailed to me on Monday to see if I can add/subtract people :-/

Okay, perfect. Thanks for all your hard work putting this together, Vincent!

Sometimes it is better to be lucky than good.

Yes, Drew is in as well as (e:metalpeter) if he so chooses. Everyone has a ticket and all together in the same row to boot.

Does this mean that Drew and I can go? Let me know please, so I'm clear! Lol.

Awesome. That sounds like a plan I would love to go. Just let me know where and when I should meet you and I'll be there.

I just called up the Bisons this morning & they gave me 2 seats next to the 4! So we're sitting all together, I am gambling a bit since I don't have a full confirmation with (e:metalpeter) but I'm sure I can find 1 person to go if he bows out.

First of all I'm sorry for causing the confusion everyone. Somehow I forgot or didn't see the post about the 4 pack of tickets. In my blog I was talking about 4th of July Stuff and that I might go the bisons game, never even thinking about the foursome. Hey if you wind up with an extra ticket somehow I would buy it off of you. But if not it isn't a big deal because If I went to the bisons game I was going to go down and Buy a ticket on Friday morning since I'm off work. So sorry for the confusion and just let me know what happens thanks.

We got our foresome & I just ordered the tickets.

If you have two, then Drew and I should back out, we're on the fence. Or maybe I'll just go without Drew if you can't find a forth between Mr. Mike plus one and Vincent.

I have two right?

I'm actually right with you (e:dcoffee)

I just loved the line "ultimately force you into an entirely government-run plan" Really? I just love how people love to make the government the boogie man. Seriously, at this point can it be really much worse than what we have now? The bookies that run the insurance companies? Really that's what they are all they do is take in the premiums and just make sure that they keep their "Vig" like some guy booking football keeps his 10% of the action.

Not to be influenced by Michael Moore but Sicko really did it for me. As it's just freaking sick that people get hosed for $10,000 for a non approved ambulance ride & have to choose what finger they want to save. But God bless our capitalist non Government run health care system which given Americans the right to poverty through bankruptcy. Because it's just such more uplifting to have some finance guru douche bag making your health care choices than some government bureaucrat.

If this falls flat on it's face which is a possibility I will always love my Mom for giving me the BIRTHRIGHT of health care by having me in Canada. Which really is always my backup plan if things ever fell apart for me. I'd be over the border so fast waiting me 3 weeks for a OHIP card in St. Catherine's it would be sick.

What gets me is "How are we going to Pay for it?" I don't know but seriously at this point we are past whatever pain threshold we ever may have had as a country it just doesn't matter. After the Bailouts and Stimulus plans it's like we just decided to go for broke at the Casino, there's no sense in stopping now all in the name of fiscal responsibility.

The only thing I can compare it is if you ever went to a Casino with say $100 to spend and you blew it even though you were careful and still wanted to play, then you hit the ATM once, Then Maxed out your card AGAIN after midnight when you had a fresh daily limit to blow.Then after you totally hit yourself in the head against the wall you hit up your credit card for a cash advance. At this point you may still have room on your one card or you may have another card to hit and drain. I'm not sure were we are but I'd have to say we're on the credit cards now. At this point stopping when you're down 3,000 isn't going to be that much different than if you stopped at 4,500.*

You forgot about these other protesters down North Street!

But I have to say they were clearly Non-Christian more political or in actuality the classification belonging to "Peace" protesters. 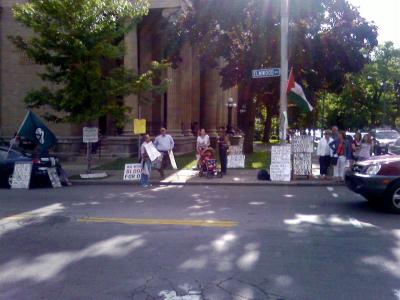 Heh. Oh yeah, the "Free Palestine" guy. He's been around the hood as long as I've been living here.

Nice Picture. That is one reason why I wish I had a cell phone. I would love to be able to mobile post stuff from things that are going on. I wonder if the "Protester" really protest or if they are just trying to spread the word at some place where they know there will be a lot of people.

I'm mouring in a strange way

I had a pretty good day off today. I went to my Dr's to get an annual checkup which oddly enough turned into a 15 minute therapy session, which I won't get into detail here. Then I hit up the NYSIM on Transit for a massage which I'm still glowing from even though I thought I felt pretty good this morning. After that I just walked up and down Elmwood stopping in Starbucks for a quick cold tea and read the paper a little bit. Well I read the Buffalo News and saw an obit for a young woman that was murdered in Lockport & didn't think anything of it. Well being that I just rejuvenating my body & that I spent some money today & just decided to take it easy.

Then being the person with no love life that I am I go home and check an online dating service that I belong to, still have a profile on and kind of wonder why I even bother having it up. Well I just was going through the people who viewed my profile & realize that the victim looked at me back on Feb 14th!

There are some things that really jump out at you in what she wrote and how she phrased them that in knowing what we all know, it's kind of really really frightening to say the least. I really don't want to link to things as the last thing the family needs is to worry about creepy internet guys trying to get a date with a woman that has passed on.

But it's just totally weird as the only reason why I notice it was the picture that was used in the news stories and the obit was the same one she used on the site.

She obviously didn't see anything in my & I can't fault her for that but right now I'm kind of freaked out by the whole experience. I wish I had the opportunity to meet even if things did go awkward. It just brings the whole tragedy to an odd place as my only relationship was through some dating site of which we never meet or exchanged communication.

Needless to say I'm a bit weirded out right about now & feel extra bad after realizing this fact as I did feel pretty horrible about reading hearing the news of this violent death of a person that had only the most wholesome intentions of helping troubled kids...

If it's the lockport murder I'm thinking of- she worked at a... "house for troubled teens" type place, and was beaten to death by 3 of the "residents" after she started playing checkers with them.

I can see why you are freaked out a bit, it is odd that thing about it being the same picture also.

that is a weird coincidence for you. My friend had posted something vague about it. His GF was very close friends with her and was quoted in a news article, so I finally made the connection. Anyway..small world and very strange..

I so wished we had a place like this around here in Buffalo.

I guess the Wegman's deli on Alberta Dr will just have to do.

I don't know how I feel about it so far. To be honest I really liked Jay , Kevin and even at the very end Stuttering John. For the last few years I really haven't even watched Conan as much as I did back in the day. But to see Andy Richter back kind of gave me a warm fuzzy feeling as it is akin to brining back Ed McMahon from really back in the day.

Andy Richter is on!

When Andy left Conan, a part of me died.