I have been out here a week and to be honest I wish I could stay out here longer. This is the first time where I may have to leave something to stay here, Ha Ha.

The best part is I had to stay sober for the entire time out here and I still had a blast. The highlight of the trip was hanging out with my friend Chad from LJ. You just love the way the internet brings people together in very strange ways.

Now I have to pack and try to squeeze some fun in the next few hours before I head back to B-lo.

Oh, the mystery "guest" that sent me the message when I was leaving the Palms after a not so good session brought me a smile.

I do live in the sticks

I saw this when I was running into my local Rite Aide to pick up a script. 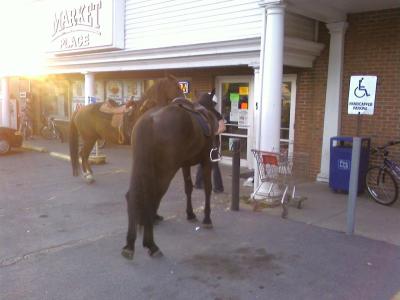 The funny part is that the hitching Post in the middle of the pic is an actual hitching post! I asked my Dad when I was a kid what and why there were there. Now I actually saw it being used not for a stupid decoration, but for a practical purpose for not just one but two horses.

On another note I can't believe that in 30 some hours I'll be out of here. The thing that is ghoing to really stink is that due to the meds I'm taking I can't drink for most of the time I'm going to be on vac. I guess I should take it as a sign of synchronicistic good luck and roll with it. It will be the first time that I have been in that town since the age of 17 and not lit up a marb red or drank something. I just need to hurry up and try to pack, ARGGG!

The picture of the horses out there made me smile:). I hope you'll have a great trip!

haaaaaaaaaaahahaha! that's so funny. i've never seen an actual horse there before!

p.s. Have a great trip, even w/o alcohol. Well, you said for most of the trip you cant drink.. so just double up during the times that you can. See, problem solved.

I love pulling up to the horse posts!!.. & that not everything had been torn down over time, considering its much more of a snooty area than a 'stick" area. yeesh, thats soooo ransomville. hahaha. I miss Barnums *curses cvs/rite aid*. And while I'm at it- the old wooden playground pieces at Falkner park. Probably weren't the safest anyways...
ok, I just hijacked your post to reminisce!

now I wonder who rode those horses into the village?

I've been away for a while and to be honest I don't know how I would get 30,000+ views on here when I wasn't posting.

It's just that I have been sorting out what to do with my life lately. The topics of dicision range from 1. Shoud I quit my Job ? Mind you without having a place to land immediately afterward. Given this is almost suicidal since I've known people in this area that have done that and were sitting out in the cold for 6 month until they found another place to work. Then again that just could be a sign of WNY. I really don't want to whine and cry about the particulars but I just can't stand to work with the people any longer. Yes, a lot is going to change but I just can't stomach the individuals any longer and that is basically it.

In another thought I am starting to think I may be Fucked when it comes to "dating." I have to give kudos to (e:Carolinian) to his recent sucess. You still have the desire to go out there and try and make a go of it. For me I'm just like "Um..Ehh???" Basically when it comes down to it the way I'm wired sets me up for failure. If I elaborated it would be a long post and would basically frighten off any female that would read it. All I can say is that I know for a fact now that the people that drive me to show an effort in the end just are not what I want deep down inside. The people that fit my ideal just end up never getting anywhere near me by design or circumstance.

I've justified it to findout other qualities in a person and such, but in the end there are just certian laws of attraction that need to be there with relationshps and if they're not meet then you're just kidding yourself.

I'm going on a trip this week with an Ex. Basically I said you can come along if you just buy your own airfare and I'll take care of the rest. She took me up and her Mom is driving us to the airport. All I know is that deep down inside I'm taking her along as a nice thing to do since she has had a real tough time of thing lately.

When I get back I don't know what I"m going to do with my life. The thought of being free for the summer is quite appealing. Going down to D.C. and hanging out there or tagging along with my Mom to Poland sounds like even a better idea.

For the pics, I ended up going out Friday Night to Broadway Joes to see my boys play. What I noticed was someone reopened the old Mickey Rats. I suppose enough years has passed for a bar to open again on that premisis. It still has that scary feel to it as I walked by with the ghosts of White Baseball cap wearing dude past sizing me up. Missing was the trashy underage girls. 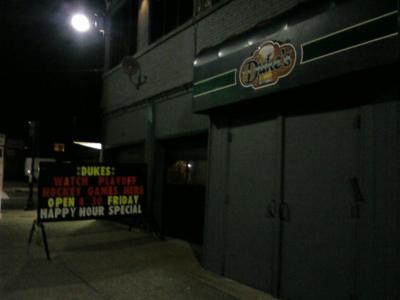 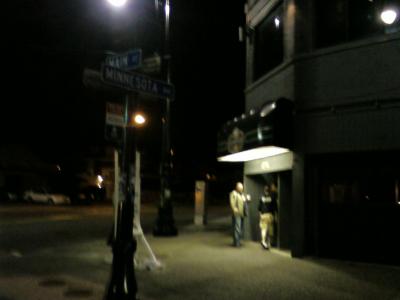 That is just nuts when compared to LJ. On my LJ if I get 3 hits or views I'm pumped. That just shows what great work the people at this site do.

that 30000 views is for all of your journals from the day you started posting. that sounds about right to me. i think just about everyone with the same amount of journals has views in the same range.

Here's to the Night

I'm just here on campus studying for my exam's this week. Of course I hear the conversations among the few senior acquaintances I have gotten to know by taking Accounting classes. Basically I just heard of the memories and reminiscing of all of those "nights that they can't remember." A part of me really wishes that I could go back to those days. Actually I had that Eve 6 song pop into my head: Here's to the Night.


Yea I wish I could still hang with these single minded kids. The hedonistic one track mind folk that actually are younger than Paris Hilton. These kids are born from 84-85.

So yea I wish I could still go to work and sip a mixed drink from a waterbottle, but the world just doesn't work like that you know.

Who knows, I'm not guessing it's a statement about all the people born during those years, but maybe it's this institution? I guess I have to ask this question to myself; If I had to have some accounting work done, would I feel good about these people completing the work, given that they somehow got the grades but only remember chugging the everclear on a eventful weekend?

School is artificialy funny. You can drink like a mother fucker, show up to class, and get C's and you can still get a job.

At work, if you spend your weeknights chugging well liquor and spreading herpies you will suck at your job. So, these folks will either grow up when employed or live in their parent's basement and go to AA meetings.

Oh, and Everclear? Some people regret sleeping with someone while drunk, some people get into fights. Last time I had everclear the night ended in canibalism.

that song was like my favorite when i graduated from high school!

All I have left to worry about now is an exam and I'm pretty much excellerating now that the weather is much nicer.

I just can't wait to get out to Vegas in a little more than 2 weeks. Through my past offers I think I may have thrown some drama into the mix, but at this point I'm just happy to be going out there soon. Really I'm more focused on the city and the couple of friends that reside/work there and not who is tagging along with me. Plus it is only for a couple of days not like the entire week will be spent with them. It should be interesting, but deep down I think we're making it more complicated that it really is going to be. The only fear is that the relationship will end when we get back into town. It happen once before to me, but I think it involved betting on a game in which a team blew a 14 run lead and losing a ton of $ on it. Never tell your friends who to bet on, not even if they ask.

Speaking of ghosts of the past I think I may have uncovered the reason why I have not been able to move out out of my current job. I did apply for a low interest credit card and was denied. This really confused me since my FICO score is in the low 700's. Then in the rejection letter a Tax issue was cited as the reason. When I called NYS Dep of Tax & Finance they basically told me that it will come off in July! It almost seems like it won't be worth the hassel of going through the 3 agencies to fix it. Then again it has fucked me for way too long. No wonder why I have been feeling the fustration of not getting hired at any place descent. Right now I almost feel as if a weight was been lifted off of me.

Well for not posting for a bit I think I should keep this semi short.

Have fun, just be to sure to avoid the quickie wedding chapels, as I'd hate to have those late night jaunts to the Pink and Jimmy's be over at 9PM.