Why I'm sick of the internet

So Bill Nye collapses and could have dropped dead, but everyone had to update facebook/twitter/or grab a clip for youtube. 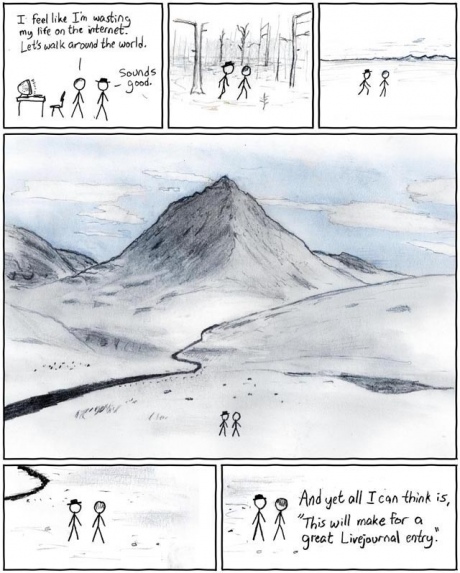 I'm sick of the crap on here. God help you if you are "researching" anything medically related as you will convince yourself into hysteria that you're going to die in about 15 minutes on here. I'm sick of the expectation that you're going to find someone that is out of your league that will be attracted to you just because they're online and live hundreds of miles away. Let me see what else?

I don't know but I do like to write to express myself, share things and also keep a record for myself. At this point of my life is is great to see what I was doing/thinking in 2002 and also compare myself to how I look now. Yes you could have taken pictures back then but it is so much easier to click and open this photo to the one you've just uploaded to say iPhoto.

But Yea, that's why I haven't been doing too much lately. Plus I don't want to carry on about things that most people will shy away from especially the negative personal topics.

I am not sick of the internet at all. I am fascinated by how technology has continued to evolve and brings out the venal and sometimes the graciousness in all of us.

Well things like dating sites are weird. I can read a bio on someone and can't tell if we would vibe in person or not.....

I'm pretty sick of the internet too. I find myself reading engadget and that's about it for entertainment.

So back in '07 I guess I saw their billboard on Virginia St and I thought Cool. I can call information without being charged and what not. Then I started using it and I loved it. If I was in West Seneca and wanted Chinese or Pizza I would call the phone number with the type of business & City and get a listing of places. The best part is that they would connect me on my dumb phone through bandwidth.com so I would have to hang up and dial the number again. Also once in a while I would get the business's address texted to me so I could input in my GPS.

Now it is all gone tomorrow. I guess from their website they're just going to focus on their android phones.

So until sometime in February I'm going to feel naked and lost without GOOG411 Seriously, if I knew more about the business and had their address, I WOULDN'T HAVE TO TEXT YOU GOOGLE! That is why I used your service in the first place.

So thanks for using me for the last 3 years. I'm glad that I was able to help you develop your voice technology for your phones. Now I guess I'll have to download the latest update to my old GPS.

I am certain that most people in higher learning institutions currently at this moment are just hiding out from the great recession. To be honest I think they would be better working at Tim Horton's instead of racking up student loan debt.

There used to be a "Fast Food Principle" where one could judge how bad a recession was by the quality of your fast food. If it sucked, then the economy was great as no one with 1/2 a brain or clue would lower themselves to work in a fast food joint. If the food is of excellent quality, then the economy is in the dumps as qualified and competent people are desperate enough to take those jobs.

My question is that economy sucks & my fast food and other services that I use are really bad.

That can mean one of two thins. Things are not as bad as they seem or the people that are providing me services are morons.

How & Why I voted for Governor

I voted for Kristen Davis. I can't get behind Cuomo as I can't with a clear conscience vote for keeping things the way they are currently. The entire upstate area is just a dumping ground for people on Public Assistance for the entire United States of America. The trouble is I can't get behind Crazy Carl even though his message does have valid points. The Greens are a bit too far out there for me and to be honest their points are just a bit to impractical for immediate results.

So i voted for Kristen Davis, Elliot Client #9 Spitzer's Madam. To be it makes perfect sense as someone who always defaults to the "cop out" answer of being a social liberal and fiscal conservative.

I can get behind legalizing Pot and taxing it, in actuality it does LESS damage to society than alcohol.

Legalize Gay Marriage. For me I don't take the whole Love angle, but I just look at it as a contractual partnership. What if two Men or Women that were sexually dysfunctional wanted to get together to show their eternal platonic love even though they were impotent or frigid and pass their assets to the other's family ect like any family member? Let them do it and file Married Filing Joint on their tax returns if it gives them a tax advantage so they can play the system like everyone else.

As for Prostitution I don't see why it isn't legal. Canada now has made it pretty much 100% legal

YES, Human Trafficking is a horrible thing and one cannot downplay that fact. But if we made it legal where everyone had to have a SSN Card register and get a business license. If someone wants to sell their services to another person why does it matter that it is sex? A general contractor is selling their back to you when you hire them to build you a house or renovate it. There are guys that can't get laid due to a lack of social skills or a physical disability, they shouldn't be discriminated against at all.

Plus she ran a business which does count for a few things and also worked for a Hedge Fund. So I can get behind someone that was in favor of the Bush Tax Cuts for Capital Gains.

So that's how I voted and the reasoning why I supported her platform.

I also Voted for her as well. I did follow the links and found them very interesting. I think legalising things like gay marriage, weed, and sex for money freak people out cause they think it will be me smoking a jay geting naked fucking two girls on a park bench or something like that. I think they also freak out cause they think the govrenment is endorsing it. They aren't endorsing anything. What they are doing is get envolved with regulating something that is illegal and making it safer for those that partake and also getting tax money from it. As an example say I'm a male slut (sounds fun) and when a someone (girl or maybe even a couple perhaps what ever) Buys me enough drinks and dinner and wines and dines me I got home or to a hotel and we have fun, that is legal... But instead I'm seen at a bar and Whom ever says "I need this, instead of playing games all night Here is the money I would spend on drinks and fun for you lets go to our place" Now that is illegal, What? But if I was registered I could go "Here is the rate, here is my card, call in 3 minutes and set it up" Or "Sorry I'm off tonight but I'm on Sat, lets set something Up". I also think that when people here legal they think no regulation, that is decrimanlisation and that I disagree with. I take it one step further a certain percentage of the tax can be used to help with people who can't stop smoking up and to have shelter or halfway houses to get girls on the street off of them who want to go legit or get away from the pimp. Besides if you can have someone who is safe and not Spitzer price most people would go for that over the crack whore who will blow you and your buddy for 10 bucks or for a rock or two will do the entrie party (from what I have heard)...... Great Point on gay Marriage, I think it needs to become same sex and be about legal contracts as well and not just love, but love is great to.....