I'm going out Saturday night to catch Sabrefrog, it has a friend of mine from high school who plays the character of Bert. I recently hung out with him in Hollywood when I was out there about 3 weeks ago. Anyway it's playing at

I just took these randomly as I was driving home on Friday. 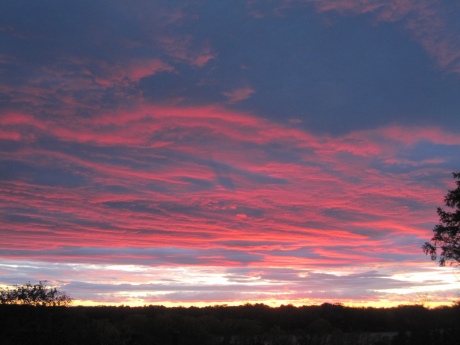 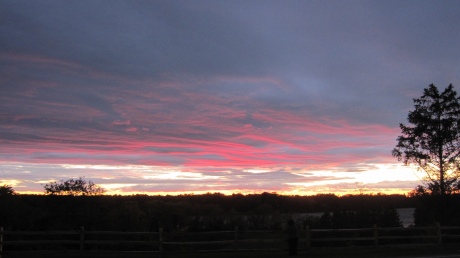 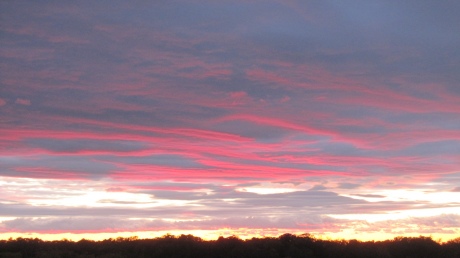 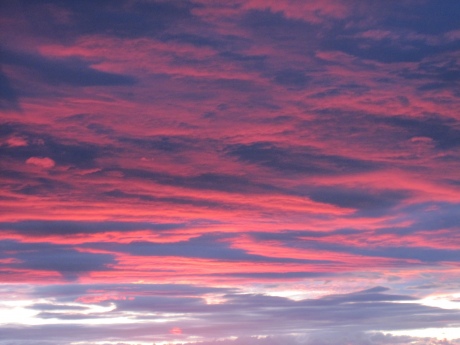 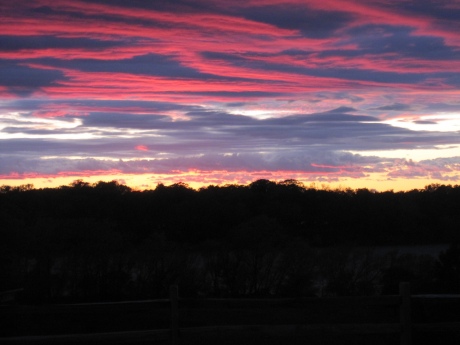 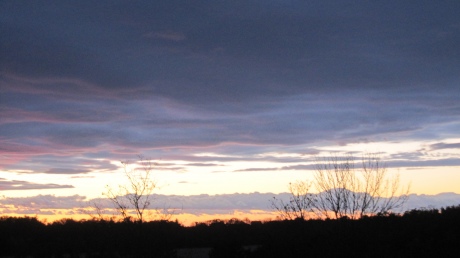 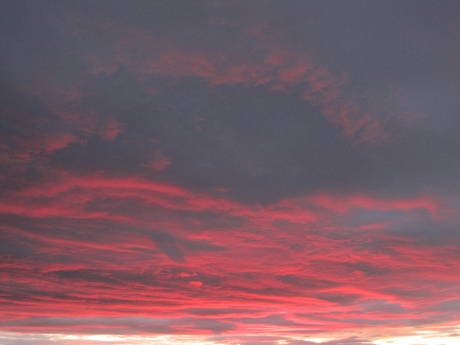 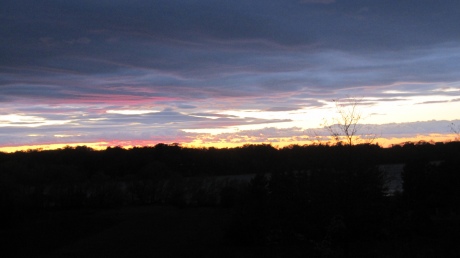 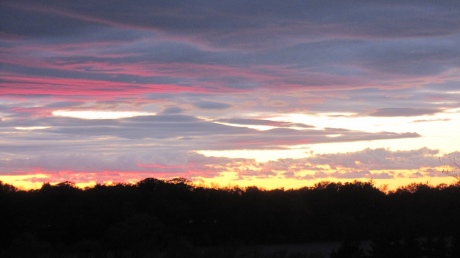 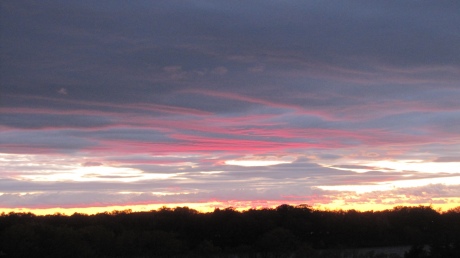 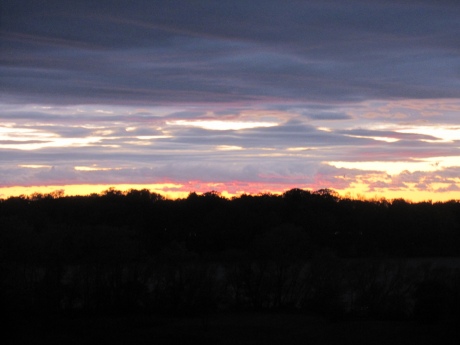 Late at night after it got even darker the horizon was still red.

Nice Pictures. I love the Redness in like the first few shots....

As know it appears that you may "buy" a house and live in it but we'll just assume that you actually bought it from the rightful owner and go along with it. As it's just a shared illusion that you "bought" the house. It's so true, it took someone with 1/2 a brain and a little bit of balls or a good lawyer or knowing a political figure to say " Show me the paper, motherfucker "

Man I wish I bought a house 3-4 years ago in a nice place and find out that I can get it 100% Scott Free as legally no one knows who the F owns it or whom you have to pay! Yea,that rule of law is just going to go up like flash paper really shortly. That and Real Estate prices are actually going to go up in the short term as no one will touch a Foreclosed or REO property with a 10 foot pole, so you can just make all of those For Sale signs "vanish" sort of. So all of my Ex Girlfriends working in the local Foreclosure Mill on Sweet Home Rd are going to have their hours cut I suppose.

What is even crazier is Tom Brokaw Mr USA Greatest Generation says
college grads now should look overseas for the American Dream:

Here's what he said, quote, "I wouldn't be looking just within our borders for opportunities. I would be looking to see what the chances are of getting a job in the Middle East, for example, or India or China. I'd be looking well beyond even the national borders."

I really hope I never have to move to China or the Middle East to get a job, now Europe that would be another story.

When I was bored last week and had more spare time I decided to take some pics of Niagara on the Lake and the Lower Niagara River. 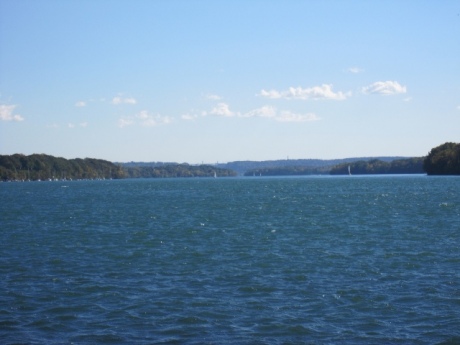 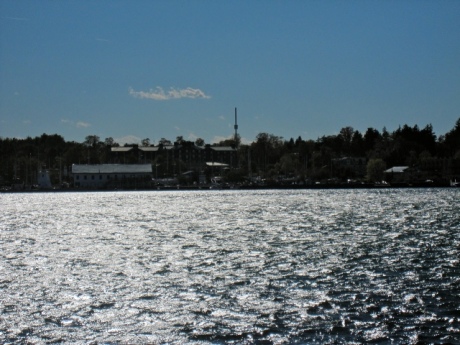 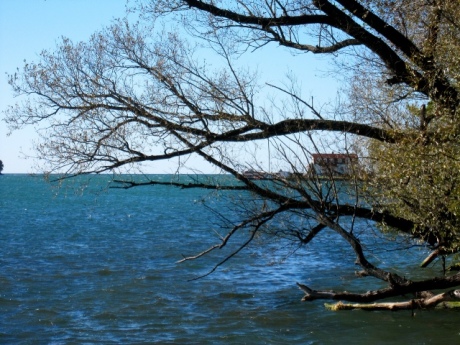 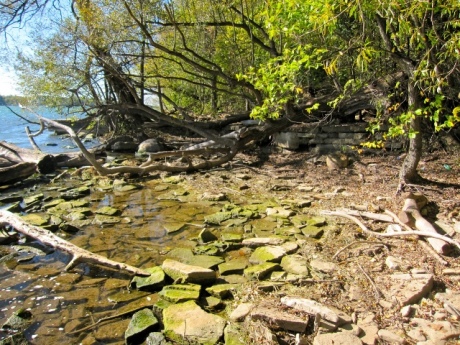 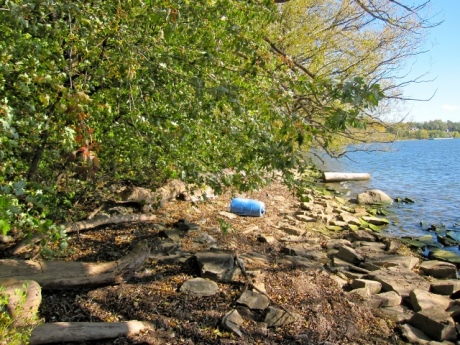 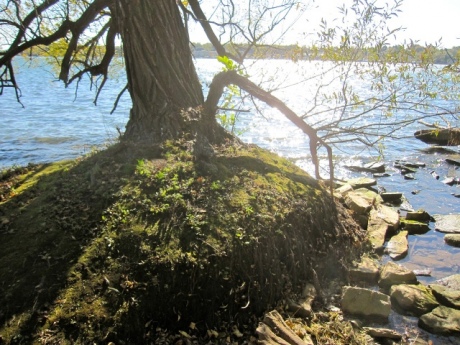 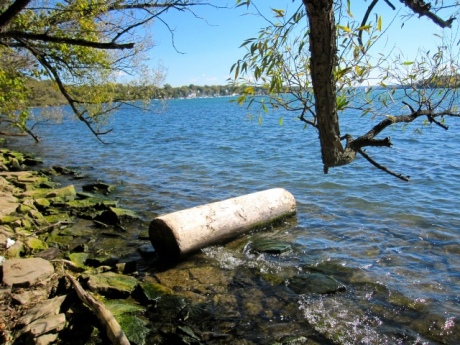 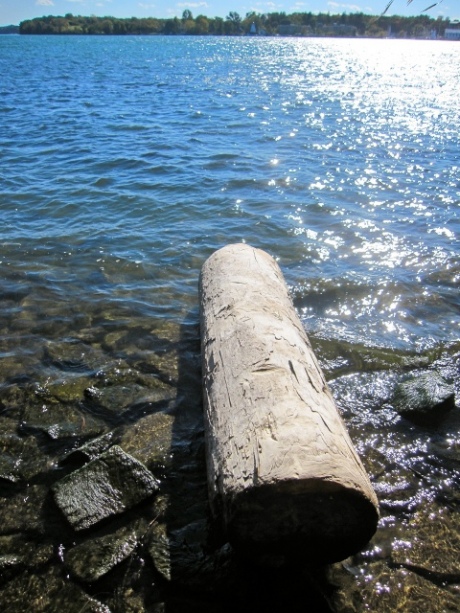 I almost thought the 3rd photo was not aligned properly! Really like the one with the broken rock floor basin

Yes! I love the river. My mother hates it and she never fails to tell me how much so. She thinks it is dangerous, I think she is right.

So the casinos in Western New York days may be numbered:

To be honest it couldn't happen to a better group of people. They ran the place like Enron, WorldCom, Tyco, Waste Management ect.

What kind of controls did they have in place to prevent being defrauded in the Golf Course Deal?

They have liens filed as they stiffed contractors

and I have first hand knowledge of them treating their employees like utter shit.

Do you think that a place that is being investigated by the IRS for numerous violations is going to just easily fork over the 200 Million that the state is asking for?

They should have hired Harrah's or Penn National to run their casino back in 2002. Mickey Brown and his team did a fantastic job in building up the brand and getting the hotel project started. Instead they ran it like a lemon-aid stand with a cigar box as a cash register.

It should be interesting to see what happens. The only reason why the state entered into this agreement was due to the fact that the State needed cash desperately after 9/11 and passed the compact in the middle of the night. Without the 200 Million, What's the point of allowing it to operate especially with the cigarette issue still at the forefront?

Nothing good ever came out of that place, and I won't shed a tear if the state troopers/National Guard surround the perimeter and not allow anyone in/out of their territory in downtown Niagara Falls.

I guess after all Joel Rose was right after all.

If they had an issue with VLT's they should have brought it up back in 2005 When Buffalo Raceway/Fairgrounds/Hamburg Casino and Batavia Downs installed them. Why did they wait 5 years to make a stink about VLT's Oh yeah the Cig issue.

This issue is so complex really. The Claim by the natives is that slots at racetracks violate the deal they made with the state and my guess is, that it does. What started this entire thing is that Albany is corrupt that money just vanishes. Well the other thing is that western NY pays for the city tax wise. So then they go and try to tax the gas and cigs. Now here is the thing yes it is true that the natives don't have to pay sales tax but that doesn't mean the white man doesn't have to. If you go into say Canada you have to pay a duty. How would you enforce tax on mail orders though. This entire thing with the Casino didn't become an issue until the cig tax was one. I'm not anti casino but the deals that where made for the native ones where bad. They tried to make them legal before the Falls in Canada even had any but it got voted down (the rumor at the time was trump through money at it to make it fail). See if you had legal Casinos then you get all the tax money and you could get companies like the Hardrock Cafe (in Canada) or other companies who would run them, then you could have had multiple ones that would bring people from out of town.

I have another theory as to way that didn't happen. It would hurt the states real casino the lottery. No one really knows how much money goes into that and how much comes out. Yeah you can claim you loses on your taxes but not sure how many people really do. I think the lottery hurts way more people then a casino can. So many people with out money play it on a daily, they win a bit and think great now I have money, but if they just kept that money they spent they would have more then they won, but when cash goes away quick I get why they play.........

I actually took the time to throw some iMovie effects for this one. My apologies for not stabilizing the video drive through Topanga Canyon.

So I went out to Southern California for a week. I have a couple more videos to edit but I'm going to post this one here just to get something out there.

I traveled with a friend o fmine and hung out with a friend of mine who works in Santa Monica with whom we stayed at his townhouse. The air on the pier is just refreshing and amazing. I didn't feel too well when I went out there (maybe I was sick of work) but I felt like a million bucks after being in the sun and heat of Southern California for a week. We then hit the Hollywood Bowl for the Sound of Music Sing along, which apparently is a big event. Honestly we just went to see the venue as it is a legendary art deco historical place and bought tickets off of ticketsnow.com at the last minute. We ended up getting box seats and had a blast.

The next day we went to the Epicenter 2010 concert festival. 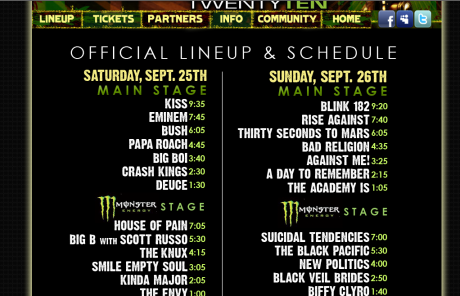 I went to see really to see Bad Religion, Suicidal Tendencies, Rise Against and Blink 182. Seeing Blink in SoCal was just a perfect thought. I was a bit disappointed with 30 secs to mars. Jared Leto just rubs me the wrong way as he just seems like an out of control ego manic controlling freak. I came to hear you play, not order everyone around.

Anyway here is the first video.

I am jealous of the sunlight and ocean experience.

Wow! What a great film. It just shows what really drives the internet after all, love/sex and other raw volatile emotions.

I hate to say it but I really feel for Mark Zuckerburg. I guess it was the opening scene after getting dumped by Erica Albright when he starts drinking and blogging on Livejournal. Who knew that is how to become a Billionaire is to: (Have ZERO ZLICH NADA Social Skills or Game with the Ladies) Thus fueling your sexual frustration and then not only flaming her, but taking it to an exponential level!

But yea, you have to give him credit for rising above the pecking order of society and becoming CEO, Bitch!

There were also some great references in this movie. One to Niagara Falls and the other one to the Original Karate Kid, which was too funny given the prototype of the members of Harvard Crew.

Did I also mention that the sound track is totally kick ass?

How can you go wrong with Trent Reznor. Some great pick for songs included California Uber Alles by the Dead Kennedy's. Also whatever electro/trance song that they were playing in the club when Mark is having an Epiphany with Sean Parker Mr Napster is just plain SICK!

Plus it was also a fun time seeing it with great company, someone who could also relate to references "back in the day" (e:theecarey)

In the end just go and see it. It's dark, yes but at the same time brilliant.

Glad it was a good time. Just wanted to add that there are two other movies about facebook but one of them is on the internet and I think is real. One of the phone companies has some promotion with facebook and someone on there has videos where they go meet people that they don't know but know through facebook. then there is another movie that is a horror/suspense movie where some guy falls in love with someone on facebook and goes to the house, from the previews it looks like an empty house. Now that I know this movie was good I may have to go see it....

Is this the film about the facebook inventor. I saw the trailer when I went to see Inception. Looked interesting

NB: I don't feel impelled to join facebook, regardless.