So for preparation of Fat Tuesday I took my nap as required. Supposedly I was ready to go. Then the realization that my Father needs to burn $200 Can $'s in credits at the Niagara Fallsview Casino Resort. After waking up around 6ish I head out and lure him away from the craps table to consume some good Chinese food at 17 Noir downstairs. In between the casino floor and the restaurant the thought that concert tickets would be a wise use of comp points. So he asked me what I found interesting. Looking for something soon I ended up choosing to see "The Commitments." I remember seeing the film when I was in high school and yes they are the same guys from the movie on tour. Anyone want to join me? I have 1 ticket out of 2. Finally we ended up dining on a bowl of Won Ton, Beef and Chinese Broccoli and Lobster, almost using up the total balance.

I apologize to (e:Lady) Croft I did see you called but I was in ROAM at the time.

Then I ended up trying to meet up with the estrip group. After finding a parking spot on Forest I tried to look in Goodbar and Coles but to no avail. Coles is just too claustrophobic for my taste sometimes as it is impossible to maneuver with that oak wall. By the time I was on the sidewalk I got a phone call from my old friend Peter and was called for a quick conference.

About 11 we was free and tried Nietzsche's, looking for the group. No luck, I tried the Old Pink and Hardware. At Hardware I enjoyed a PBR and called it a Fat Tuesday, as I need to be at work in about 6 hours.

With Lent now underway the thought of my Old Catholic upbringing comes to mind. What am I going to sacrifice for 40 days? Usually it was something that I never bothered to do or did not like. A good example would be Sex if one did not have a significant other. It's just that your current situation is calling for a situation that you are giving up something you never had in the first place.

The real sacrifice is giving it up when you are in a relationship. The real suffering in dealing with the fallout of being a martyr in denying you partner something that she obviously was not consulted in going without. 40 days...would it be a week or two before one found themselves single and in good shape to carry on their Lenten sacrifice until Easter Sunday? There was a time when I was so Catholic I would be a total religious asshat and give up a relationship for Catholic Guilt. This would actually be a good idea when I delusional thought it would be a good idea to be a priest. Thank some kind of higher power that I began my Recovery from that Religion.

OK it is very late. 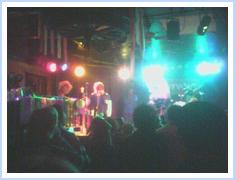 we were at all of the above, i don't know how we didn't see each other!???

I now have a presence here

Yes, I am finally getting sick of LJ. Well not totally but like Theecarey I will still keep my blog going over there, probably more so than she does now.

For the past two weeks now I have just been lounging around at home not really going out as I have been known to. The hook to my user name is that I have seen Pulp Fiction on late night cable movie channels, usually on a Saturday Night. My last name is Vincent so I figured, Hey why not spin off Vincent Vega? Go UC Santa Cruz Slugs!

The sad part is I do not own the DVD

been waiting.. you gave me the heads up a few days ago..its about damn time! Welcome!

You too, will become an addict :)

Is this mike from goodbar? hi! welcome.