Anyone ever try this?

early teens I used to skateboard- mostly tricks, not so much to get around places. Preferred to walk or ride my bike for all that. But I used to do all sorts of fun crazy stuff on my Vision board- scraping myself up regularly; then the boarding interest just faded away at the end of the season after one particularly bad fall hopping from a wall to a kid built ramp. Anyway, haven't really thought about getting back on one of any sort since..

then I saw some longboarding posts over at a snowshoe site I frequent; and I thought, I WANT TO DO THIS!

but I'd sure give it a go if I had the equipment. 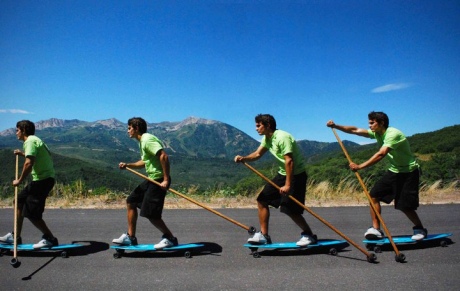 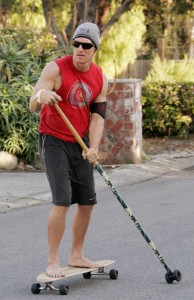 On the plus side, it would provide a killer upper body work out and a great conditioner for water paddling sports.

Yet, without the kick motion of regular skateboarding, one loses out on lower body conditioning.

For no external reason I was (am?) a bit in a sour mood the past couple of days. Not so much as anyone would notice as I am not one for taking it out on anyone. I just internalize and, at most, those close to me notice my extra quiet demeanor. During those times, I prefer to keep to myself and hide away from the social world until it passes. Long, brisk exerting walks/jogs/climbs etc help a little- kinda smooths out the rough edges. But it is really just a matter of time more than anything. I think this will be a quick funk. All weekend I did not want to go out, but there were social expectations on Saturday that I pulled my self together to get ready and make good of following through on an event I was expected to be at. However, shortly prior to arrival,via phone call, the plans were changed to another location. The locale was changed from the Stillwater on Delaware to some place in Amherst, and I had just arrived in Buffalo (and I was even running late!), therefor rerouting my evening to head in a whole new direction was not something I was willing to do, so I enjoyed the spontaneity and made the best of it (despite a strong draw to head back home, and despite being irritated a little more by this as I was already primed to be in an off mood). I am social enough and approachable enough to have friends, acquaintances and the ability to make fast friends wherever I go. I quickly decided to get in touch with and catch up with a new male friend, then I headed out to another location to hang out where I knew another group of friends could be easily found. All was good enough but I wasn't out long before I went back home for the night.

A long night of weird dreams, I woke up not wanting to actually get out of bed. This is a great time of year especially when the sun is out and so my natural inclination would be to head outside somewhere and hike all day. However, I just turned on the tv. The Matrix was on, and that kept me entertained most of the day. I was reveling in my funky mood. It simply felt good..

Then the pull outdoors won me over and I got ready to go out for a bit. My foot travels led to car travels and I took care of a couple of errands before stores closed down for the night. Feeling more inclined to be social, I managed to make a quick plan to meet up with a friend over coffee, then I left him to run to another friends house for dinner. It was this encounter that was most recuperative. This small group of friends (5-7 total) are ones I have had for many years. While we don't have much in common for our day to day lives, and due to some lifestyle differences, I don't hang out with them often, but we all share a long history and nothing ever really needs to be said. Literally.
and I like that.

Dinner was made. I chilled out and ate a lot more than I normally could (lasagna and chocolate cake), but it was all part of the course of the weekend mood. Following that, we wandered around the streets near where they live (Riverside), and chatted about good times past and dreams of the future- silly, light weight stuff. Like suped up golf carts, engine rebuilds, off-roading expeditions, camping, motorcycles, mopeds, city living, weekly dinners, etc. I even had the opportunity to punch something repeatedly and that always feels good. I really need a large punching/kicking bag that I can hang in my garage. Got one?

For some reason, as the night came to a close, I just felt less irritable. I was rather reluctant to wrap it up.

On the drive home I realized that I felt a little restored, for which I am grateful.

Equally grateful, and speaking of being restored, is that the "restore backup" feature on here was successful, as my sensitive keyboard skipped back a couple of pages and eliminated what I had written up to a few sentences ago. That feeling of dread worked through me until I saw the restore option and it worked. Phew!

If all things in life were that easy. :)

IE? oh hell no. I've been using Firefox and occasionally Chrome. I'll give Lazarus a try, thanks! :)

I feel a little bit underwhelmed about going out this time of year also. Saturday night I fell asleep watching TV instead of going out dancing.

Indeed, glad you are feeling a little renewed

Kinda Like the easy button on those staples ads (wish they made those for hot chicks, Ha, no seriously I wish they did, HA). The Restore backup is a needed feature if you are on chrome it is so easy to drop a picture in the wrong place... It sounds like you had a great time....

Give it a whirl! (Goes without saying that if you are on IE you are doomed anyway. I hope you aren't.)

A lot to catch up on around here

Damn, I knew it has been awhile since I have posted here. Seems that I have very little to say even though my head is always full of clutter to sort out. So it has been since January. That is nuts. I do hang out at Facebook a lot, ironic since I hated it for so long and even went out of my way to state, "I WILL NOT join the Facebook lemmings..' But, after several attempts over the past few years, last May I found the site to be finally relevant, and it has become even more so over time. The downfall is that I haven't been writing anything, anywhere. So not good for prosperity (and immortality!)

So... I'm going to sum up the last 9-10 months..
However, it barely crossed my mind and I havent been regularly online for about a month now. I cut my DSL temporarily. Library and cafes have been my place of internet usage. I use my phone rarely for that purpose.


There is so much more.. but that is what has come to mind and I do aim to post more. Whether I say a little or a lot, whether it is clear or obscure, it is tiny part of my history, and I like having bits of it documented. Looking back on it is a trigger for other memories or for simple reflection. There was a time I wrote a lot.. and that hasn't been the case now for the past couple of years. Gotta work on that in one way or another. Maybe I need to haul out the old pen and paper?

Speaking of writing, I also aim to gat back to NaNoWriMo. Whether pick up where I left off last year or start something new, I am not sure. It is a nice way to get the writing creativity flowing.. and that starts Nov 1st.

should change my profile pic eventually..

Let all us (e:strip)ers admit one thing as much as we love this place facebook is addicting, if you use it to keep up with people not even to mention if you have time for the games.....

I think if you did the mobile post thing you would post more here. For example (minus the fingers falling off from the cold) Snapping pictures from where you snowshoe and then mobile post them here and on FB.

In Terms of more money, maybe see if there is someplace you can work where you spend money. For example that is why many people who work retail do it so they get a discount on the clothes they wear. Any Libraries or book stores hiring Just and Idea.........

Always glad to you in these (or any other) hallways.

Lemmings? Do you think they are all headed to an untimely demise? These authors seem to think so -> :::link::: (that's a PDF unpublished doc, btw).

Very active! Hope things change quick on the financial front for you. I really need to be grateful for what I have. My last year's resolution to have more financial security was not realized.