one bit of whining

I hate my work schedule.

time for bed; dreams are my repreive tonight.

With you there- Mine blows with no sign of improvement 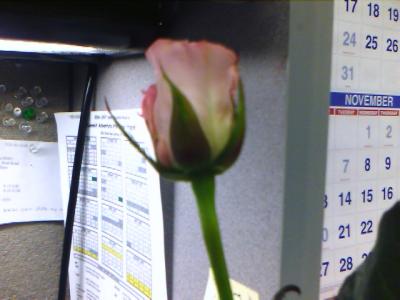 Received this from a father of an autistic boy that goes to the academy I work at. Just because.

I really am a sucker for flowers. I think this amazes me, as it is really just a flower.

I just sat at my desk for a few minutes and held the rose under my nose-- it smells so yummy.

I thought I would take a pic with my phone. 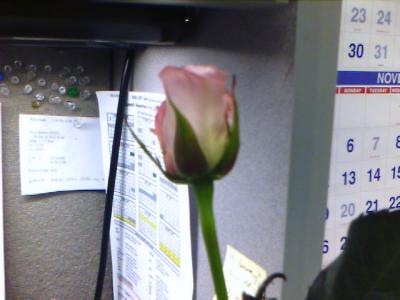 hmmmm, maybe I will take a bath.. a few minutes of relaxing would be good for me; there is so much going on in my job-- good thing I kinda gravitate towards the sticky/chaotic situations.

now the challenge is to let my mind rest..

A good soak can do wonders

Right now I share an office with another girl.

We havent had much opportunity to chat- get to know each other etc. We had a short convo on cameras (Cannon Elph) and music (we equally despise country). Thats about it.

The guy who's position I have taken over had not yet packed up his stuff and moved out of the office- another reason why we havent had opportunity to get to know each other. So all week I have been plotting a way to give her an inaccurate impression of me. I thought about how I could decorate my little office area with soemthing obnoxious--but not offensive (I leave that level of evil for my close friends!) but I wasnt sure what.

I visted a classroom teacher earlier today who was telling me that someone had given her a bag stuffed with beanie babies. She brought them into the classroom thinking that perhaps the kiddos might like to play with them. Well, I want to play!!! I am not terribly fond of them, but I do like a funky stuffed animal once in awhile (such as my beloved stuffed turtle, "Bob", Mad Cow- (e:theecarey,250) and just a couple of others). I began to pick through the pile to see what I could steal for myself. I liked this crab and bat- so I took them. As I proceeded back to my office, I realized that placing Bean Babie stuffed animals all over my side of the office might be just the level of silliness that would be appropriate to allow someone to "get to know me". So I went back to the classroom and scooped up the other 30 Beanie Babies.

I waited for the girl to leave for the day, and the guy was just finishing cleaning out his stuff--perfect--so then I lined the stuffed animals along my desk and a few other places. I was giggling the whole time. This is almost as good as Trolls ala Mimi style of Drew Carey.

I would actually like a few more-- So come Tuesday morning (no work due to holiday on Monday), I'll be curious as to what she thinks and says to others.. I let the big boss in on what I was scheming. If I find a few more obnoxious things to add to the collection.. I most certainly will-- but I'd have to sneak in before anyone comes in. I am sure many people in that unit will be wondering what is wrong with the new girl :)

hehe first impressions are so much fun ;)

i will totally bring over the vaccuum to suck up some bugs for release!

of organization and reanimation

New job. They want organized, I'll be organized. For some reason they already think that I am. score.

I went to Target to buy a calander-planner-lleather-thingy. I never cared for these things before. I pretty much have everything I need to know stuffed in my head: phone numbers, birthdays, doctor appointments and other dead lines and details. If I ever write anything down, it is for back-up purposes only. Besides, planners always seemed way too complicated and unneccessary for me.

I'd prefer to use my Pocket PC when I eventually get around to purchasing one. I am so lazy when it comes to shopping..

So I figured a more complicated planner will work for various reasons-- as in, I will actually need to use all of the sections that are in it. I'm sure I will adjust along the way. Its red.

I need to figure out how my schedule will go.. There seems to be all sorts of crazy meetings all over the place. Some really late..

I am trying to absorb all the information that is thrown at me-- wanting to have known it all by yesterday. I know bettter.. but still, I just want to know already how to do stuff. I'll learn, I'll learn..

Need to go shopping for professional attire. I have a few things.. much of it will work, but not for too much longer. Yuck, shopping..


HA! It was (and is) really cool to veg out to a novel. My fave are psychological thrillers with a little bit of fantasy- surreal- weird shit added to the mix. Book I am reading now has to do with a genius who worked for a privately funded genetics company- -working on phasing out genes associated with sickness, replacing them with genes attributed to superior health and repair. This scientist is obsessed with staying young. Experiments on white mice demonstated success and then some. Mice that were physically harmed or developed disease, quickly regenerated back to health. Some mice that were killed, didn't stay dead for long. This was not expected on behalf of the research scientists. Consequences maninfested in extreme behavior. An otherwise docile white mouse became excessively violent after this reanimation. It became vicious and sought to kill/harm other mice and anyone who got it their way. OK, forward to youth obsessed genius scientist who is a bit psychologically off kilter as is, and decided to experiment on himself. Later-- he dies-- but not for long. He is already a violent person, and his consequential actions much like the reanimated mice follow suit-- but to a much more vicious and insane degree. bal blah blah

There is a lot going on in this book.. its fun. I am happy when I can use my imagination and wrap my mind around crazyish ideas. Its so much more enjoyable at this point then heavy theory based information that I have been stuffing my head with for so long-- and its been a couple of years since I have read a generally mindless brain candy novel. I spent the entire evening last night reading. I went to bed way too late becasue I could not put the book down. When I am done posting, I will return to the book and most likely finish it tonight.

After this little mental vacation, it is back to working on projects previosly started. I need to get organized better on that as well; make a plan to fully commit myself to a set amount of hours per week on other ventures.

ps (e:pyrcedgrrl) you suck. You havent answered any of my texts. :P

I have not recieved one text message from you, including the one you sent the night of the party. I'm getting the one my sister sends just fine.

yeah, i'm not so into the fantasy sci-fi stuff, like wizards and dragons and stuff... but Crichton etc- the "almost believable" cool science stuff... fun. :)