Not a lot of time to write but I wanted to put this crazy article out there. Honestly, even living here for 2 years I still find some things shocking. I mean, death for dressing like a man??? I'm still not sure exactly to what extent they mean this, but I find it far more difficult for a woman to dress like a man, since wearing pants and jeans and t-shirts are perfectly acceptable today.

We made a quick visit to UK and then stop in Rome. I'll get those pics up this weekend, I hope. Things are very, very busy with the ending of the school year. Miss you all, really looking forward to July!!!

A leading academic has sounded an alarm against the growing trend of cross-dressers among boys and girls, saying that it is a "serious menace to society".
Speaking in the monthly Lakom Al Karar TV programme, telecast on Friday night by Qatar TV, Dr Saif al-Hajari, the deputy chairperson of Qatar Foundation for Education, Science and Community Development, described the emerging trend of "manly women" and "womanly men" as a "foreign trend" which, he said, had invaded the Qatari and Gulf communities as part of the "globalisation winds".
"This is an issue which can harm all our social and religious values. It needs some sort of bravery to address it. I have never imagined that one day I can see such behavioural deviations in our streets, schools or universities," Dr al-Hajari said.
The episode, which discussed behavioural deviances among youths, was part of the heated debate over the issue of "Boyat" (girls dressing and acting like boys).
Transgendered people, who reportedly are seen in public places, were the subject of a heated debate during the past few weeks as clerics, educationists and sociologists cautioned against the new trend spreading among girls and boys.
Dr al-Hajari said that the efforts of both the state and society are required to address the trend.
"There is a lack of legislation organising the public code of ethics. There is a need to develop our legislations in this regard," he said.
However, he also blamed it on what he called "foreign fingers and groups" seeking to cause harm to youngsters.
"These cases of behavioural deviations we have are not working alone. They co-ordinate with similar groups on regional and international levels," he added.
To a question whether foreign education institutes established in Qatar are responsible for the spread of the phenomenon, Dr al-Hajari said that Qatar Foundation, which is the umbrella of foreign universities in Qatar, should set up a mechanism to protect young people in such universities from "invading behaviours".
"We need to educate the administrative and teaching staff of these universities on the special traits of our society.
"Some foreign schools and universities hire staff hailing from communities that do not see any problem in what we think of as deviations. This is a problem that should be dealt with."
The participating audience, mostly students, was "divided" on how to address the emerging trend. Some of them suggested capital punishment for those who indulged in "transgendered behaviour", while others said that the organisations concerned should reach out to these groups and deal with them as patients.
"This problem can only be addressed if the community rejects this type of youth and punishes them," a participant said.
However, another participant said that students who have such behavioural deviations should be engaged rather than isolated.
Another participant called for launching a public campaign to raise awareness about the dangers of behavioural deviances as well as educating families on how to protect their children against the social menace.
On the motion "This house believes that the concerned institutions and ministries are performing their duties to correct the behavioural deviations", 100% of the audience voted that these institutions had failed to do their duties in this regard.
In a survey, which was conducted by the Amina bint Wahab Secondary School for Women, and included 500 girls aged between 15-20, a majority of 45% of the surveyed students saw those girls behaving like boys as victims, while 40% said they are guilty.
In a move to curb the phenomenon, the presenter of the programme, Mohamed al-Marri, announced that HH Sheikha Mozah Nasser al-Misnad has established a new social rehabilitation centre "Al Awin" to deal with such cases.

Here is the way I see it. Yes there are certain Islamic Laws that must be followed in an Islamic country. That being said if you let people not from you country into your country there culture is different, you can't have only the things that you think help your country that is one of the Trade Offs. It should also be noted that not all Islam is the same. If they think it is then maybe "The Nation Of Islam" aka "The Nation" should send thousands of people over there. I also think that maybe what they should work on is the difference between Public and Private conduct education. But there needs to be a halfway ground some where. In any event it was a pretty interesting article.

It is good to see the scholar couched his argument in tribalism and xenophobia. The irony of all this being that Iran performs the second most gender assignment surgeries in the world. 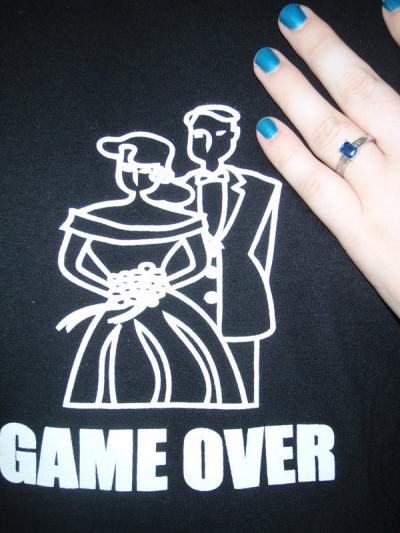 Love it and your nails!!

That shirt is awesome.

One Ring To Rule Him All,
And In Matrimony Bind Him. ;)

Thanks for the birthday wishes everyone!

It is too bad you were unable to attend the joint (e:jim)/(e:rory) birthday bash.

Have a splendid year ahead, Rory! Sending you a whole BIG bag of good wishes! :D

OooOOOoooooo. Have a good one!

My former student/fashion design major just left. We had our first wedding dress meeting. I'm so excited that she can help me do this. It means a lot to me to keep things tight, as in having friends and family contribute to the process and necessary components.

Meanwhile, I'm over the work thing. I vented my frustrations. I called the situation out, and I feel much better. I'm going to be just fine with it all.

Last night I spent several hours working on the "Pit of 100 Trials" in Mario Paper. You literally have to complete 100 levels of bad guy battles without any save options. Wouldn't you know it. I get to room 99 and then I die. For serious!