I had a dream that I was standing in Martha Stewart's kitchen trying to convince her that she should publish a book on crime scene cleaning. What's that all about?

If it was me, the dream would be a result of seeing both CSI and the Martha Stewart right before I went to sleep.

I had such a beautiful dream last night. I was walking through a lovely forest full of redwoods and giant ferns. The sun was beaming strands of brilliant light to the forest floor. I could hear a few insects, a few birds, but I knew I was alone. I came upon a small hot spring. The surface sparkled in shades of aqua. I removed my clothes and slipped in. I drifted in the floating abyss. I was overcome with peace and happiness. I wanted to stay there forever.

cool dream. i hope the feeling of peace and happiness carried through your day.

I had a bad dream last night. Apparently I was on a job interview at a large school in North Carolina. They wanted me to watch a video about the school however they had me sitting inside a stadium and the video was playing on a TV outside. Oh, let me also mention there was a pep rally going on! There was a marching band, screaming fans, bull horns, pom-poms - the whole nine yards. Girls kept coming up to me and saying weird things like, "you're hair ain't big nuf for this state" and "your eye shadow is perfectly layered". It was so chaotic and anxiety provoking.

my marriage to a little person

I dreamt I was in a wedding dress of sorts. I was in a mall, something to the like of the Eaton Centre. Several floors high full of fancy shops, the middle divided by a canal large enough for a small cruise ship to enter. My 'parents' were not my parents. My mother was my ex-boyfriend's mother and my father was some man I don't know. I was supposed to get married! It was an arranged marriage to boot. He was a little person, as in dwarf. I didn't know him. I didn't know anyone except my ex's parents. The guy that was supposed to run the ceremony was my ex-boyfriend's father, who is a preacher.

The cruise ship is about to leave on a journey and strangers were grabbing at my arms trying to force me to the ceremony site. I thought I could escape if I jumped for the chains on the side of the ship. I knew I could; until she showed up. She had black hair, black eyes, and long bony fingers. She appeared in a mist hanging on the very chains I was trying to jump for. With the push of a few fingers she hurled the chains at me, striking me in the head and knocking me to the ground. She laughed as the ship pulled away.

My escorts tried to get me on an escalator that would double as the aisle for my entrance. I could see all the people waiting at the bottom. My body was struck with the most intense anxiety and fear I've known. I was crying and wrestling to free myself from the deathlike grip of my captors.

Suddenly, as if an extension of my will, a fierce wind began to blow up the escalator. We couldn't move. Each step they tried to take would slide back into place. I thought to myself, if I could only break free the wind would release me from this impending prison.

Then I woke in a panic and sweat, still feeling the anxiety I experienced in the dream.

Maybe the wedding represents what you imagine other people's expectations are of you. And the dwarf, that you are selling yourself short by trying to live up to them Or maybe that was just a David Lynch movie, haha.

Anyway, very interesting! I'm not making fun of your dream, only at my lame attempt to analyze it. I wish I had more time, because I think there's something there.

If you belive that dreams have underlying meanings or that they are a way for the mind to sort things out then that is a deep one. But hearing about a dream like that makes me kinda glad I can't remember most of mine.

I had a dream last night. I was on an expedition with a dozen people. I was not necessarily the leader but it was apparent I held some authority in the group. We machete our way through lush jungle. The air is heavy and moist, presperation on every square inch of my skin. Foreign insects buzz in my ear and the songs of mysterious birds echo under the canopy. Arms aching from navigating the vegetation we rest only moments when an accidental footstep reveals a narrow staircase leading down into the earth. We light our torches and decend into the unknown.

A gentle breeze begins to blow, turning colder and strengthening with every step, until the breeze becomes a wind, and the wind becomes a gust that extinguishes our flames. 'Why didn't I bring that glow stick!? Fuckity fuck-fuck-fuck'. No sooner does the explicative escape my lips when a faint glow transpires at our feet. A silvery mist of liquid silk surrounds us and we drift into weightlessness. I see Jason. 'Jason what are you doing here?'. He takes my hand and replies, 'I told you to take control of your dreams'. The mist diminishes and we are at the entrance of a great temple.

Great trees groan, their vines swaying gently, leaves falling like summer snow. Pillars of blue Verdite with veins of green support a stone carved peak. Ornate metal work adorns a lone wooden door. We enter a sanctuary and it is still, so still. I cannot hear my footsteps. Our mouths move forming words on our lips yet no sound escapes them. It is scerene, it is peaceful but it is tainted.

A glimer of yellow catches my eye from a distant corner. I yell for everyone to climb, climb anything they can find, but my words fall silent in the mysterious air. A stampede of mad cow-like creatures charges from a darkened corner. Their eyes are a brilliant yellow with red pupils. Their teeth are long and sharp. As if someone hit a switch everything becomes slow motion. Every movement requires great effort. I manage to scrabble onto a stone tomb. One of the beasts glairs into my eyes. This time when I shout, my words are clear, 'I need a screw driver!'. A yellow screwdriver appears on my hand and I jump and stab the beast in the eye. Then I woke up.

Did you wake to find you were poking the pillow with a pencil?>

I was attending an ultra-mega-platinum-first-class party at a mansion in the middle of nowhere. You had to be dressed up. All the (e:peeps) were there. Then Wiley Wiggins showed up in a red smoking jacket looking all daring and dashing.

The strange thing is, he was looking for me. I kept trying to get to him and all the (e:peeps) were holding me back, trying to distract me, divert my attention, confuse me....keep me from finding him.

WTF is that all about!?? Let me have my lovely dreams in peace!

I wonder if any other peeps had that same dream from there perspective that would be weird. If you look at the dream literly it could mean that all the time you spend online is hampering your ability to meet Mr. Right. Or it could mean all the peeps thought that he wasn't Mr. Right and that why they where holding you back. In any event interesting dream.

i'm not good at interpreting dreams but i think its one of two things: you need to get some; or your waiting for someone to come and sweep you off your feet. your dreams are trying to tell you something. you should know that its your deepest desires that are buried in the id that come out. usually i'm on vacation in my dreams at some posh hotel but lately i've been working in my dreams because i miss it. i dont know what I can say except its winter and everbody hibernates up here. summers coming soon and ya never know who you'll meet...DT

requiem for a dream

I actually slept last night. I forgot what it felt like to feel safe and warm surrounded by soft sheets and blankets. To wrap myself in a beautiful dream. One where I was loved, and he held my hand and smiled, then brushed the hair from my eyes. I knew I was alive.

&quot;brushing hair from face/eyes&quot;.. it is a simple gesture that we interpret as &quot;I am here.. I care for you..I will not let anything hurt you while I am around&quot;. It is powerful.. yet such a simple gesture.

i had a dream last night that I was working at mothers again and they were only allowing me to put the wasabi and ginger on the swordfish plates. instead of actually going to work these days...i dream about going to work and being very busy.

This &quot;brushing the hair from the face&quot; elicits a strong response from women for some reason. I did this to my ex-gf recently and she started to bawl her eyes out.

I hope you can as jenks said take that dream and use it to make your self feal better for a few days. Spring will be here soon,the change to less cold weather makes most people happy. Except for the guy part that sounds like a dream I should have also.

that sounds nice. nice in the good way. hope all is well LC.

ooh man, I want that dream! Hopefully that warm fuzzy will carry through the whole day playing taskmaster.

I watched a movie last night, Waking Life. It was amazing. All about dreams, reality, time...I loved it. It inspired me. I imagine if I was in the A-Ha video 'Take on me', this is what I would look like in my transition from the comic strip to reality. Also, depending what time I go to bed...I have been waking up at exactly 3:22am or 5:28am every single day for the last 3 weeks. 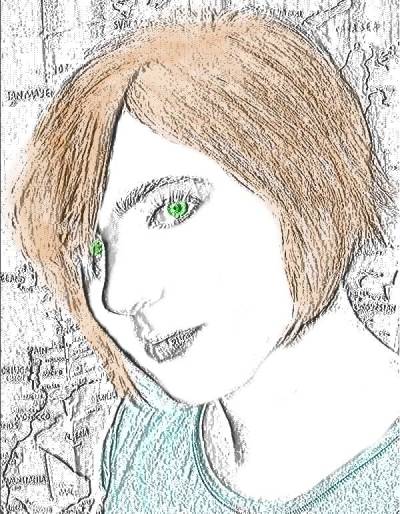 are those your real lashes??

First of all that is a great video. Cool drawing, love how those eyes and lips look really cool looking.

I want to see that movie. oy