I always know that deep down inside my worries have subsided when I start to hum or sing. I am humming and singing today.

It makes me feel so happy and slightly tingly inside. I love being happy!

Rory and I went to Atlantis in Dubai this weekend for what we have now nicknamed our 3rd honeymoon. It was freaking awesome! I always wanted to go to Atlantis since they opened the original in the Bahamas but could never afford to actually GO.

We got to play in the water park all day the first day which was great fun, minus the huge purple bruise on my rear end from one of the rides. At some point on one of the rides we actually managed to fall out of our two person inner tube, which kind of hurt - but the best part was when the next set of folks came rushing down the slide after us. I got whopped in the head by some feet just before their tube hit, which knocked Rory clean off his feet and into the tube as we shot down the remaining portion of the ride. We couldn't stop laughing.

The best part of that day was playing with Piphali!! We participated in a deep water interaction with a dolphin and it ROCKED! She kissed us, danced with us, we gave her hugs, she spun us in circles, and my favorite part - she gave us a ride on her belly! I couldn't believe how soft and warm she was. I just expected something a little tougher and colder, but now I know!

That night we went through The Lost Chambers, which is the coolest aquarium I've ever been in. I loved the imagination they used in creating ruins of an ancient advanced civilization (photos on that tomorrow). It was also the largest tank in the world, which had a WHALE SHARK in it! Granted I think it was a very young one, but huge nonetheless.

The next day we rode the new metro system they just opened up. It's not entirely finished, but some of the major stops are running, such as Mall of the Emirates, which is ridiculously huge. We stopped at Dubai Mall as well because it was right next to Burj Khalifa, which is now the world's tallest building. We wanted to go up to the observation deck but seems they are experiencing technical issues with their elevators and weren't allowing people up. We'll have to do it next time. 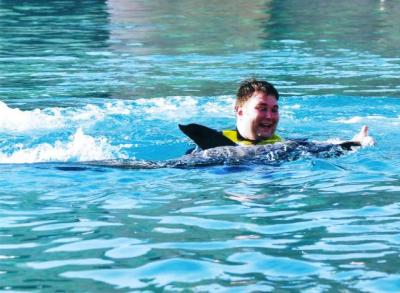 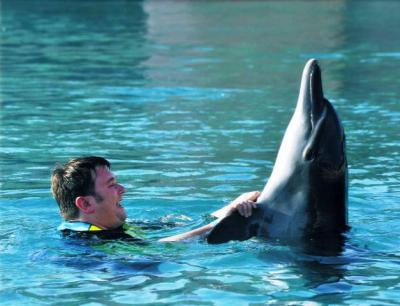 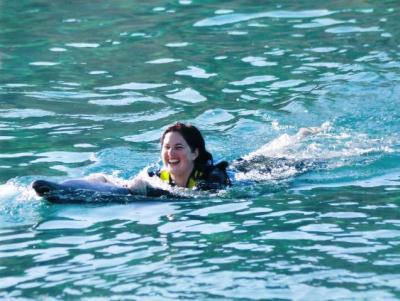 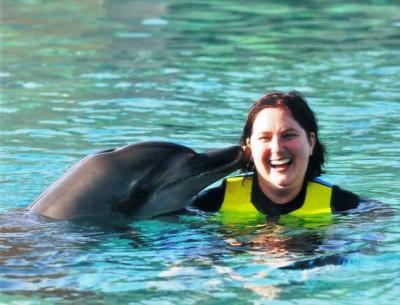 I can not tell you how happy I am that you are HAPPY! Seeing your thank you dvd was a big pick me up over break. I have a cd of photos to send you. I need an address - if you could email me it - I will try to get it out asap! 3rd Honeymoon how absolutely awesome! Keep spreading the love!

Incredible doesn't seem to be enough of a word, but it is all I got at the moment.

I am so jealous, that sounds totally amazing.

Sounds like a great time. Nice photos to (having a water camera or water prof one is a big help). I read about that tower in the news if it is the one I'm thinking of some people got caught in an elevator. I'm not sure if that is the same place that had a closed observation deck also. I just remember people who went their for vacation that was one of things they where planning and where disappointed also. Might have read it in the Buffalo News not sure really. In terms of the Atlantis in Nassau Don't feel bad about not being able to go there it is pretty pricey. I saw the public areas of it on a cruise or I should say the one cruise I was on and just the part I saw was pretty amazing. Glad it was a good time and looking forward to more pictures.

That is amazing. Thanks for sharing the photos! :)

I used this program to take my blog and randomly create this image. It's pretty cool looking at some of the words and thinking, "When did I write about bread?", etc. 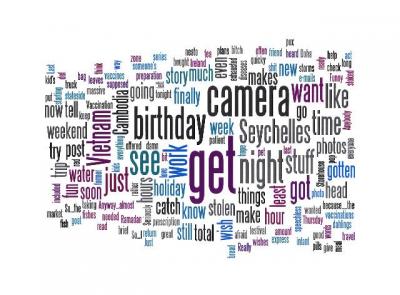