Timika is not in the top 1000 female names for any year of birth in the last 40 years.

Why am I not surprised by this?

I'm sure mine isn't either! So, here's to us unique chicks!!

Well it isn't even close to common or at least in this country maybe someplace else it is. That being said I figured out why I always think I'm spelling your name wrong I went to school with a Tamika (I think that is how it is spelled) the point I'm also getting to is that there are other names that are simalur to your name but aren't. I may have even known as a second Tamika but not sure on how it is spelled maybe there is a version with and e in there. So I'm guessing that means on Facebook your parents would get an A+ .

Just adds to your uniqueness.

I had the most amazing dream last night, I wish I could have it again and again!

In my dream we had already mastered trips to space for common folk. Naturally, (e:theecarey) and myself were on board one of these flights. We were taking a 'cruise ship' to the 'Asteroid Islands'. Yeah, clever.

The ship looked just like a space shuttle, except is was about 20 times bigger, maybe more. It launched vertically with some type of blue flame that burned entirely clean. Humankind had created a way to eliminate g-force on the internal compartments of the ship, so passengers felt nothing at all. In fact, Carey and I were involved in a game of Wizard Chess before we realized we had taken off.

There were only a few observation decks but they were closed for the journey to the first island. A creepy robotic voice announced our arrival; the sweet British accent makes me nervous. I momentarily wonder if she'll try to kill us all in some act of AI rebellion. Then the observation deck windows opened. Slowly, very slowly, the dark gray walls lowered and I caught my first glimpse of bright blue as Earth came into view. Then, browns and greens....and I screamed with excitement, "Carey come look, that's AAAFFFRIICAAA"! The massive continent came into full view as the grinding metal came to a halt. It was so real. So real. I was standing on board a ship looking at Africa from 20,000 miles away. A shroud of tranquility fell over everyone in that room. I could hear my own heart beating.

We were interrupted by the voice announcing not our doom, but our freedom to access the first island - which looked remarkably like one out of Mario Galaxy. Imagine a jagged lump of gray rock floating in space with a perfect layer of bright fluffy green grass on the top side. This island of course doesn't rotate, it remains idle save for it's orbit around Earth.

We descended to the surface via ladder. Humankind had also figured out a way to create force fields allowing for prime environmental conditions. It was perfect. No air tanks, no eye wear, just a sexy white jumpsuit was all that separated my skin from the vast universe.

Sounds Like a movie. In fact a couple aspects sound a little bit like Star Trek. By glad you remember your dreams many people don't.

I'm stealing this line from "Cloudy with a Chance of Meatballs".....

Wait was is not in the Roin Williams film, where he was the teacher and he taught english and told his students to dream. I can not think of the movie title and I own it, somewhere. Carpe Dentum! No, that was Seize the Teeth and that was also Robin Williams in Mrs. Doubtfire. I mean Carpe Diem, Seize the day! Yes, it is spelled correctly. See fours years of high school latin paid off.

You May also be stealing it from a Metallica song but not sure with the spelling if that is correct or not, HA.

I just got notification that I've been accepted to NAFSA Academy! I really wanted to do this so I am STOKED. It's a 9 month training program for young professionals in the field of international education. Since I'll only be in Qatar one more academic year, I wanted to find ways to broaden my international experience and boost my resume. This is my golden ticket! So, so, so happy I got accepted! Woohoo!

Which means, brief visit to B-lo in March! The spring training session is in Atlanta, but I need to get to B-lo to do some important name change stuff that I must do in person. Hopefully I can see a few peeps while I'm whirl winding my way through!

Congrats! Webber clan adventures R U! Just remember inquiring minds want to know and we are right here ready to read salivating over what next?!

Congrats. Hope that in March you get to see everyone you want to in Buffalo. (e:Jason) asks a good question.

Congrats, that's terrific, hope the whirl wind can set down for something here when we hear about your next destination.

That's awesome! What is the next stop for the Webber clan?

For Christmas this year I tried a new way of cooking the turkey. I enlisted Rory's help because it was grossing me out, but hey, got a 13 pound turkey cooked in an hour and ten minutes! Got the idea from our favorite cooking criminal, Martha Stewart.

They made it look so easy in the magazine I thought it would take about 15 minutes to mutilate, but ended up taking an hour! Maybe the turkey wasn't 1oo% thawed, maybe my kitchen sheers need sharpening, or maybe it's just plain harder than it looks in a picture.

STEP 1- remove all the innards, rinse, and pat the bird dry with paper towel. This is important because the bird WILL slide all over the place if it's damp. Our poor Blinky got her head covered in pink turkey juice as it spilled over the counter. I scrubbed her fur and got the pink out but she smelled like turkey all day. 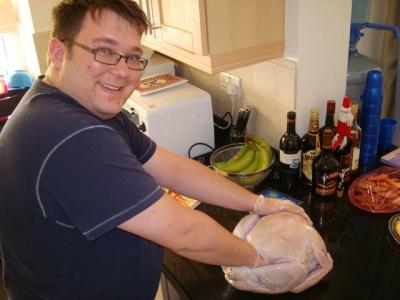 STEP 2 - Flip the bird over on it's belly and stick your sheers up it's butt hole. Cut the spine out by cutting along both sides. I think our bird had scoliosis.... 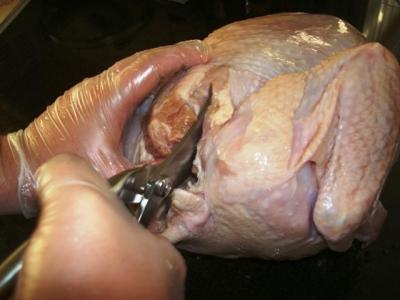 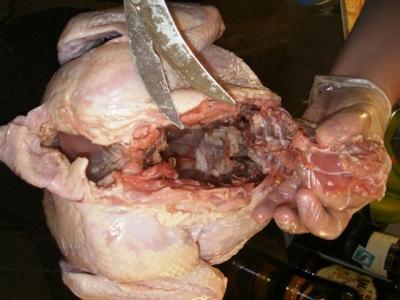 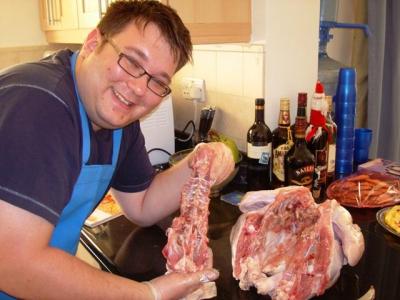 STEP 3 - Flip the bird over so it's breast side up, and break the breast bones. Essentially, set yourself up like you're going to give CPR, except you WANT to hear the bones break. 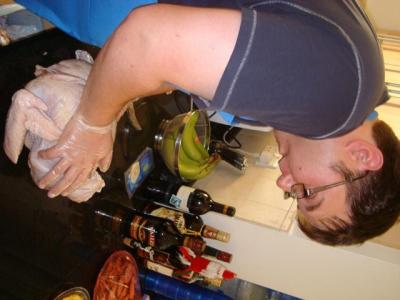 STEP 4 - Pin the wings under, baste with a mixture of olive oil and pepper, and roast for approximately 70 minutes, basting in between. 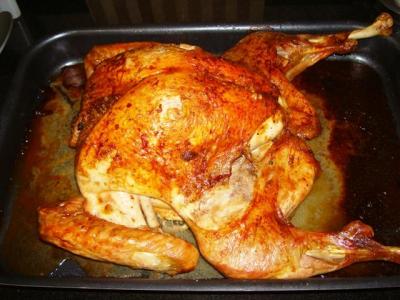 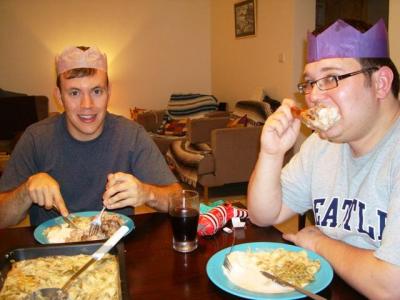 Liar. LIAR! It was true love that saved you in the fire swamp!

Great pictures! I will remember to see your additional instructions for preparation of the bird.

That pull that thing a part where you get like that little gift and a crown we (the family does that also at thanksgiving). There also used to be some thing with a pepermint pig some years and a little hammer.

I like how you flipped the turkey, the picture and rory over. :-)

Doha has wreaked havoc on my sinuses since I got here. Between the constant sandy air, air conditioners and mold I don't stand a chance. I've already had two URTI's as a result. I've been looking at the neti pot as a form of preventative medicine to see if it helps. I think I remember reading something on here at some point in the last 3 years about people using them?

Does anyone have any input on using one?

I am wondering how the neti pot went?

My uncle swears by it. I have a hard time with feeling like I am drownding, since I tried that once when I was a kid. I did not care for that too much. SO I keep waiting to hear someone tell me what it feels like.

I usually add water to the air by boiling on the stove. I have even added eucalyptus oil to cleanse my palete and help me breath better. Lately I have added taking an extra dose of sudafed. I am finding I am getting dehydrate though.

Thanks for the input, I think I'll def give it a try. Thanks libertad for suggesting ceramic. I've been reading lots of reviews and they were all mixed regarding differences between plastic and ceramic pots.

I highly recommend the neti. I should be using it right now but it is one of those things you do put off. If you do get one make sure it is ceramic and not plastic. I tried both and the ceramic makes all the difference in the world.

My story has nothing to do with me, but with a family member. My my niece and her husband were up for a visit this summer; my nephew-in-law was experiencing terrible allergies that were not eased with any sort of medication. He was so out of sorts that it was hard for him to function. He ended up buying a neti pot as a last resort (in that my mom highly recommended it). Much to his surprise, it made such a positive difference in the way he felt and functioned that everyone could see it in his demeanor. Poor thing could finally visit with everyone without looking like he was dying.

Anyone else I know usually uses it when they feel their sinuses beginning to get bad, but they don't do it everyday.

Have you tried steam inhalers such as this one: :::link:::

They work very well in keeping your upper airway healthy with regular use.

I occasionally use aerosol saline ... it's not going to stop you from getting sick, but it does work well for minor sinus congestion and sore throat due to dry air.

I use something similar to a neti pot. I find it really helpful. When I get the first hint of congestion problems, I start using it every day in the shower and it clears up the congestion faster than just using medications to treat the symptoms. I would probably be best off if I did it EVERY DAY, but I find it too time consuming for that.

If you get post nasal drip, I also highly recommend just plain hold salt water gargling. I also use a home made remedy of a tablespoon of apple cider vinegar in honey. It dries it all up.