Let's not forget that this is a kids movie put out by Disney and a video game movie to boot...or maybe we can turn a blind eye to that and enjoy it as a unique historical fantasy action movie. Which ultimately i feel like it was.

This movie was a spectacle to behold. There was so much action that those who lack enough attention span for cohesive plot to develop won't be caught twiddling their thumbs. It suffers from that fractured feeling that non animated kids movies sometimes have, still it was alarming well glued. Something that's a bit of a feat of storytelling if you ask me. They managed to pack as much action and as little story in as possible and there was a pretty well rounded message and plot still. Unbeknownst to some this film was based on a video game and gamers are notorious for wanting more action less story so it might suit them well.

I think Jyllenhall does a great job delivering some really tacky one liners that couldn't be spun as funny or witty to most, which I think is a necessary evil when making a film that's supposed to entertain Sponge Bob fans who honestly laugh at knock knock jokes.

I saw it with a friend, and after 20 minutes I wished I had Mya next to me so that I could vicariously enjoy it as well as I should through her. Maybe I will take her if it's like playing at a double feature drive in or something.

All in all I give it a 4 1/2 stars out of 5. Losing 1/2 a star only because the jumpiness that losses adults could have been more cleverly placed, but still being a fun enough action film with killing that I wouldn't wanna cover my kids eyes during. Yes see this not Iron Man if you have littles.

Go see this film if you've got littles that like adventure. Or if you love adventure tales, or historical fiction and magic your self.

I so want to see this movie. When I first saw the previews for it, it looked amazing. Then Just recently I found out it is based on a Video game. It looks like it falls into the Mummy, or Indy movies a bit. I didn't know it was a kids movie it looks to me like it will be very good, I hope to see it sat, assuming that is what I wind up doing........

Ok, so tomorrow there's 0.75$ bowling at Classic Lanes, which if you're being thrifty is a cheep night out. Only thing cheaper is a date with me, so why not do both at once and really save aaaaand have a good time?

I would love to suck at bowling with you. But I will be out of town. Next time, Tony, NEXT TIIIIIIME!

The update makes the phone a bit faster, and slightly better organized, give you access to a few more kinds of apps (google navigation, finally!), and has some cool HTC Sense updates. All in all worth the hassle

I accidentally found out that the update was published while calling sprint about an MMS message error on my phone so I freaked out and was distracted all day trying to get it installed and I mean alllll day.

The estimated time to download the 118MB file was bout 3 hours the frist time I tried to get it, and my impatience and ignorace failed me when I decided to restart the download a few times. Soon the time crawled up to over 5 hours and then I started to get ludicrous estimates like 14 hours and 2 days. By the end of the day and this morning when I check last the traffic didn't seem to be slowing.

There have been hacks and cracks for the update for weeks. I know some Sprint employees and I'd seen the update running on his device 3 weeks ago which lead me to question why they were waiting so long to release it.

I had to go to sprint yesterday for my mom and I found out the reason why they were taking so long with the phone update is because they wanted to wait for the Sprint HTC EVO launch, but I bet the pitchforks and torches convinced them otherwise.

Now everyone's bustling to get the files and the internet is broken over there. I decided to be a good Samaritan and post it on my dropbox. i don't want a million emails, but if you message me on my twitter @enknot then I will add your email address so you can grab it. Takes a few minutes there.

Note about the update. You need windows to do it (unless you can find the rom nugget without the .exe installer), and don't try it from a virtual machine. I was using VM ware fusion 3 with windows XP and right after it deleted the firmware on the device the system crashes to the blue screen and locks when it tires to reboot (tried it twice made me crazy). 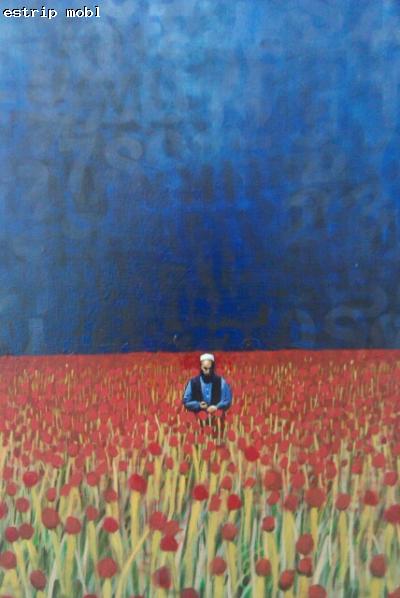 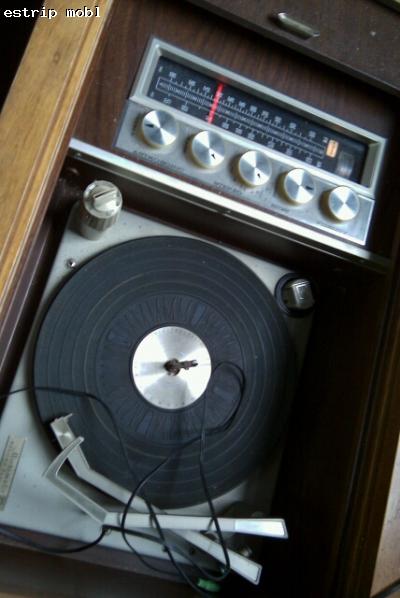 Q: You've just left the stage and wow'd the crowd, but you're no rock star, it's just Karaoke. The bartender is a cutie and she's caught your eye. YOu go and chat her up a bit, and she's kinda receptive and you ask her out to:

a. lunch
b. dinner
c. have a drink


If you were the bartender what would you prefer, and which of these if any would be an insult?

Well? what did you end up doing??

I would say c, have a drink. If she pays for round 2 or 3 then I would say that is a good sign. A drink is a lot less pressure than a dinner or lunch.

None are an insult, but coffee or a relaxed drink atmosphere would be a good first get to know each other encounter. I often go for an outdoor stroll (or more intense hike when the guy is game) followed by coffee/tea to rehydrate and relax. Lunch and dinner would be better for the second encounter, in my opinion. Go get her, tiger!

but I also agree with (e:jbeatty).

I don't think any are an insult. However more times than not the bartender isn't really into the patron. They are only making money and being nice. But if it seems like a real connection is being made I would go with drinks. Its cheaper than dinner and you will find out if she is a lush or not.

If I was a bartender I don't know as I would want to be asked to go out for drinks, unless it was say drinks back at someone's place.

Dinner is nicer but also it might be tough to have dinner then go work at a bar , time wise it could be tough to find a day. But also though Dinner implies that after that if things go well there could be other stuff to do.

Lunch is more of causal thing, and there wouldn't be any conflict most likely. Unless the place you where singing has lunch.

Hmm.. none of those would work if she is avoiding carbohydrates.

Did she give you any cues in terms of what she is into, etc? I try to avoid dinner for a first date. You know what is pretty fun is 2 for 1 martinis at Cecelia's on the patio. I also like Chow Chocolat. Chocolate is a friggin winner every time, thanks to God for chemistry. Get an ice cream cone at Fowler's. Go to Delish or Zillycakes or some other place to get something sweet.

C is really giving her more business, no? :-)

I am not a bartender, neither am I American, but I think a or b or c would be fine really. It actually just depends on what she thinks - which you won't know till you see the reaction to a or b. heh

I have an xbox and xbox live, and it was previously set to auto renew. I needed to turn that off and after finding that there was very little ease to this process I decided that I should publish it some where: So here goes:

DOING IT ON XBOX.com
1. Log in to XBOX.com by clicking sign in at the very top of the page
2. Click marketplace at the top near forums and sign out
3. from the "My Account" drop down click membership level
4. On the summary page it'll tell you the kind of membership you have and list your renewal status. If it's on click Off
5. Forage through the two pages plus pages of marketing they have when you try to turn auto renewal off
6. finally check off in the radio box
7. read their weepy (so sorry you're gone) message and rejoice

I left a nasty comment about how dirty a deed it is that they hide and obfuscate common functions and settings from users and shove "pay for ???" in front of you at every turn.

Ok... oh here's where you can buy 12 months of xbox live cheaper without giving them your credit card number:

Here's some pictures to help you along. 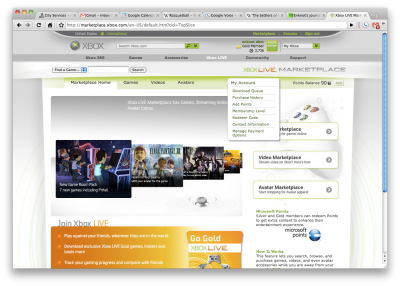 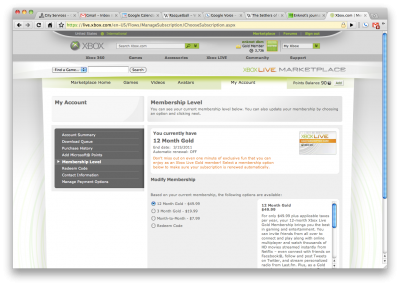 Hmm... I looked up XBOX on wiki just now.