So I killed the fish.

Meg has moved in, but back when we were just talking bout doing all that we were doing some heavy duty hanging out with one another, and as a result one or two of her pets were being slightly neglected. Ok she only has two.. a cat and a fish. I have no pictures of the cat (but I'll post some, Kitty is so cute and fuzzy), and as a result of the days events, there aren't any of the fish either.

One morning after a little scuff we made up in the parking lot of my office and she gave me her fish. He was a Japanese Betta. A war fish. The kill each other on sight and like very confined spaces non-oxygenated places. Which make them great desk fish.


Uh, the midget (Mya) came by the other day after her first day at the day care down the road and wanted to see the office, so I gave her a lil tour. She fed the fish that used to be hers and left happy that she'd gotten to meet so many people, but very much dissatisfied that she didn't get to write on any of the many grease boardsthat were scattered about and littered with markers.

Unbenouced to her she wasn't really feed the fish at all. Apparently that fish would play dead for them kinda often too and well I guess this time he just wasn't playing. This morning after several sharp raps on the bowl I decided that he'd had his fill of me and sent him on a trip through the municipal city sewer system.

I've been thinking of what kind of elaborate lies I could tell her should she ever return to see the fish, but then decided to just pick on up on the way back from lunch with (e:paul). We stopped at the fish store and I saw him. A shimmering blue beacon of hope and some snails and i'd always wanted snails, so since the betta and the snails normally got along I bought them all for about 10 bucks. (Who says money can't buy you friends)

I had some Halo 2 figurines lying around and decided to decorate the bowl a bit with a few of them. Good think too. Those snails love climbing on stuff. Plus, that Halo 3 beta has got people going wild, I figured I could get in on the action and have my own Halo Betta (snort, puns are funny.... they're not? really? darn...)

The old fish was red... this one is blue, so if Mya comes back ever, notices and asks why I'll just tell her that this is the other fishes cousin and he's bowlsitting for a tad while the red fish goes looking for that purple fish her mom dropped down the drain when she was two. (True story...about the purple fish anyway).

Here's some pics. I call the fish Mister Chef, and the snails are collective know as "the Brood".

I also popped up a picture of my cute lil psudofamily shrine. I love those gals.

On a completely separate note doesn't this picture of Jame Joyce look a lot like Paul Visco? 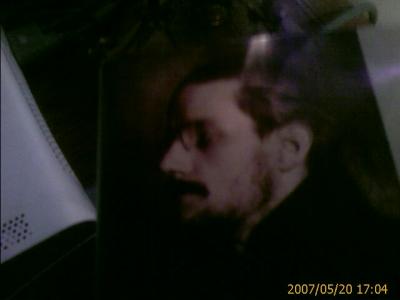 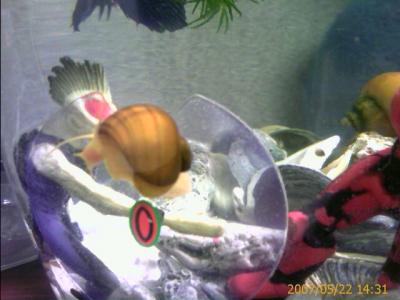 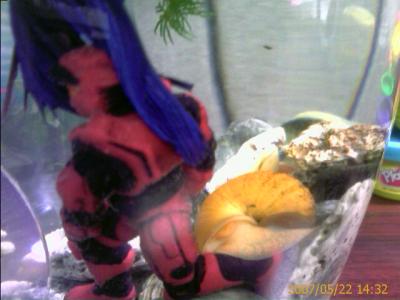 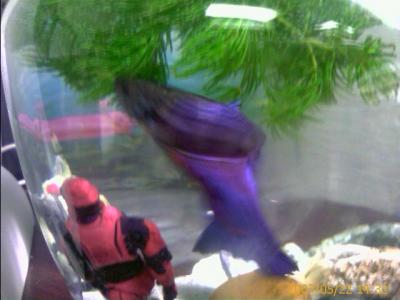 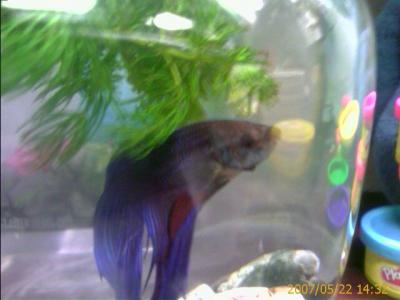 Who ever get's enough of Mister Chef 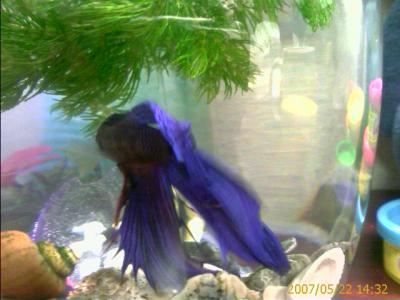 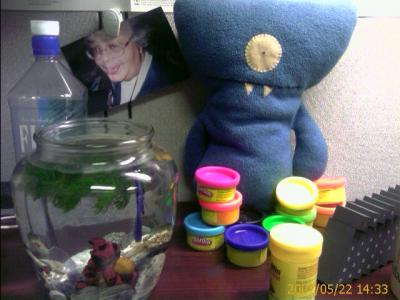 PSA for a friday night in Buffalo

I haven't seen you peeps in a minute.

I know this is really short notice, but if you're wondering what to do this fine Friday night, but there's a free concert at the Albright Knox.

Starts at like 7ish, and I hear there will be some booze perhaps, and fud (not a spelling error it's pronounced fudd like elmer, but it's the stuff you put in your mouth when you're hungry).

I'll be there, so if it's not everything you hoped for you can throw tomatoes at me, or like come and say "hi, where're you been you friggin' abandoner!?", or something.

was that a passion show? bummer, you could have thanked me for the memories!

this is only the begining of the real abandonment that is soon to come. you just wait.

Ants are cool, Spiders are not...anymore

Went to the park today (I know I've been gone for a long time, hey yall), took the midget and my nephew "Squishy".

His momma nicknamed him that when he was in the womb, and it hasn't gone away yet. She was watching "Finding Nemo", you know that scene where the goofy flat fish finds a piece of plankton and coos to it... I figure, if you end up a football dude. You know, on defense, being nicknamed Squishy, or "the Squish" not so bad. If you end up addicted to Wendy's and not quite able to scratch hard to reach places on your on body, not so good. Even if you end up a little tubby.

Both of the kids are about 3-4 and the exact same height, and they like to hang out w/ each other and 2 kids isn't too much. So away we had snacks and one of them dropped a fishy cracker (you know the Pepridge Farm doodles) near a nest of ants and the ant rejoiced!

It was kinda nice giving them a leg up and watching them go to town. We crushed a cracker up and srpinked them and it was gone in minutes. Very very fascinating.

Ants are a lot more fun when they're not in you're cubicle.

We bought this really awsome 10$ kite from target to fly since the day was delightfully windy and went to the watefront to fly it. It was really cool. Didn't take any sticks to get it up and running so it was out of the box and in the air in seconds, and out the grasp of the 3yr old you entrusted it to and into lake Erie in about 45 minutes. Still, I was so impressed that I'm going to go get another one. 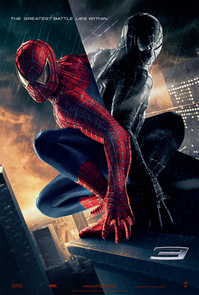 Went Thursday night because I wanted to see it before anyone else because of stupid people like me who'd release news about it before I got to see it. (Sorry if I'm doing that to you, but I did post warning so what ever dude). The woman even came with. She's awfully sweet for those sortsa things. She genuine likes nerdy things when they're put together well. We saw Grindhouse together which I will defend as being a must-see-in-the-cinema masterpiece that challenges the pallet and expertly pays homage to a vein of film that I'm very glad was forgotten and she loved it. A co-worker (you know who you are), confessed to not being able to see since it really is a gross movie, and he's lady fair's gross out factor was too high.

On the other hand. I'm very disappointed in what came of the 3rd installment of Spidey, which as far as I'm concerned was the best nerdy franchise out right now, but I guess after this pieceof crap the only thing that's left that hip and nerdy is the Batman series, correct me if I'm wrong. [Yeah, they may put out another superman, and (e:matthew) will disagree with me, but that movie was dull].

I thought the movie was well paced, but the scenes that would have looked far better on the cutting room floor outweighed the scense that were compelling and fascinating by about 10 to 1 (rough estimate, don't' quote me). There was some really good scenes (ok, only 1 comes to mind, but none of the charm of the previous films made it to the edition, and I can't understand why.

You know that brief manky and uncozy feeling you go when you watched our soon to be Dark Lord of the Sith, now whiny Jedi brat trade love pats with his poo poo on the veranda? Well Rami managed to stretch that feeling out for about a solid 30 minutes near the end of the film.

I heard that McGuire didn't want to do Spidey movies anymore past this one, and that maybe they were killing the series. They wrapped up a lot of live plots by the end of this film, and they could do another, but after seeing that crud I don't' care if they do. Especially after the hot steaming popping on that the best Spidey villain receives be becoming a bad plot device at the end of the film.

Ok, my rant is over. Hopefully I haven't detracted anything from your predestined movie going experience. Sorry it had to come to spoilerish material, but I had to get it out.