There are a lot of people at work who are on the 8th floor (that's where all the wiggy wigs work, to quote a few) who's jobs are a grey fuzzy mess in my head. One of them, Ms. Dana Jenkins, is one of the Administrative board that seems to impress me every time I come in contact with her. I still don't know what her job is, but I like her. I like her a lot. I recently bumped into her at the gym and had the pleasure of introducing her to some friends of mine.

She keeps a blog that is "internal only" and that I'm the lead developer for it, but i like the things she has to say, and the imagery she uploads there too. She's an artist, and she paints water colors. The image in this blog is one from a blog she titled "Heroism, Boldness, Craziness, What Is It I'm Seeing In Vancouver?". 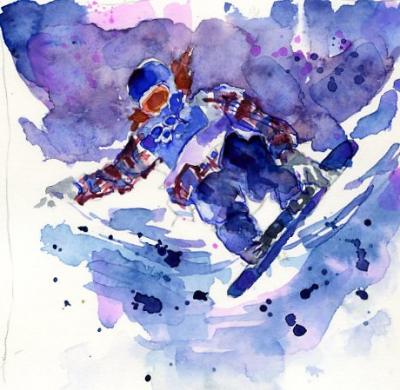 Here's an excerpt from the blog:

Almost every athlete, people at the very top of the top of their sport and their personal game, has talked about hard work as the key to their success. I've heard almost nothing about natural talent or good fortune (except in acknowledging the parents they were born to). Some have talked about planning to "peak" at the right time, more have talked about loving what they do, many have focused on performing better than they've ever performed before. As I listened I was so l glad to know that the kids who want to "be" Shaun or Apolo or Yuna Kim have heard that it takes dedication and commitment to achieve something great. But what is that underlying something that makes them do things the rest of us don't and achieve on a level that is rare. Are they bolder than the rest of us or just crazier?

I've also been thinking about everyday boldness. While less nightly-newsworthy, it takes a lot to believe in yourself everyday and to act on your convictions continuously, to step out of the background and be a frequent leader, to be the one who say "I will" rather than laugh at those who step up, to join with those who express optimism and a willingness to try rather than being a part of the pack that views them as the enemy. It's not easy to do this. I have seen people suffer because they've chosen a bold path. They certainly won't win every time but true boldness will find a way to try again. These people do things rather than talk about them. They find inspiration in others and are inspiring often without realizing it. I find them admirable.

I had this to say in response, but I didn't want to post it as a comment since I think the point of the blog is to be uplifting and motivational:

I really liked this blog Ms. Jenkins. It spoke directly to me. Not only do I like to snowboard, but it's been said from time to time that I am a bold person. It's a compliment that I enjoy quite a bit.

I think a lot of people will read this blog and identify with it greatly, but it seems that a very key element of the process isn't presented that has been haunting me lately. Boldness gone bad. Failure. Rejection. Regret. Remorse. The things that follow when boldness doesn't serve you.

I've noticed the emotional outcome of attempts like this cripple some into a life long lull, or force them to shift their perceptions of the world around to protect them selves from more of the same and as a result become less bold. I've seen many great people who live inside their own heads and scoff at the outside world for not understanding or not being ready for the greatness they have to offer. Luckily, liviing that way scares me more than failing, or else I think I'd be in a very different place...

Failure dosen't seem to stop him...


I guess I have more to say on this topic, but it's gone on long enough. Maybe I'll post a part two...

Thanks for posting the video Shaun White is amazing. How he took that hitand was ok, no one will ever know. In Terms of being bold I do agree that when you start out bold and fail bad you lose your boldness. So maybe people who are bold at a later part of life are just more bold then those that lost it. In any event pretty interesting.

Yeah. But I think it's only viewable by some administrative staff. Sorry. Maybe I shouldn't have mentioned it, but I don't see the harm really...

People who are "bold" cannot be not bold. If they change, they were really not bold to begin with.

Because boldness is not equal to stupidity or even impulsiveness without thought.

BTW, we have an internal blogsite? Really?

(hey estrip, how's about a little healthy nay saying? I can't resist. This phone looks really nice, but I've been to the brain washing sessions the MS dudes throw and I imagine it went down like this. Ok, um well..., here goes.)

...We'll call it Windows Mobile Series Seven. That'll make sense. It'll be awesome, it'll have all the stuff other phones have had for years and um... uh, XBOX live, yeah that's it.

But sir what if the people who buy this phone don't have xbox live?

Well they're stupid that's what

Um, sir, what about the people who bought the last three versions of windows mobile with the hopes to get xbox live on their mobile device? Are we gonna just abandon those people like the Apple people do?

:: chuckles all around {yeah, the apple people are jerks} more chuckles ::

:: total silence {that's a good idea. yeah sometimes you have to do it} shurgs and murmers ::

Everybody, just watch the video...

You know Jim that is the one thing about this phone that I have hope for. Its the first time MS is going to rewrite their os from the bottom to the top. Since the war for the next platform will be waged on handsets itll make this next bout very interesting instead of the forgone conclusion we all thought it was...

I'm pretty happy they chose a novel approach to the UI, it's not just a me-too sort of iPhone type thing. Although I'm not sure how you tell what's clickable/tappable or not without actually tapping to find out, the UI is very flat.

Props to Microsoft from me.

Ok, I couldn't make it past 1 minute, and I only made it that far because I dozed off after 20 seconds and felt like I owed the video more respect. Nuh huh. Anyway, who the hell wants Live on their phone? Not me. I'm okay with Live being on my 360.

wow. what a boring video.