I have a crush

OK So cold stone Ice cream cannot taste as good as the lines out side their doors suggest.

After dodgeballing this monday (and every monday in case you find your self bored) Andy, Jenny, Kim Schuster and I went for a scoop since it's just down the block. Waiting in the rain chilled air covered in sweat didn't seem so appealing so we went to a tiny mom and pop down the street... Oh right my crush.

Aside from my longstanding Jenny soap opera (which will continue as she accompanies me to my cousin Tina's wedding in a few weeks) I have a dodgeball crush... OK it's prolly not so accurate to call this a dodgeball crush. I've known this girl for quite a few years but, shes really good people, and cuter than hell. I probably shouldn't work myself up over this and just ask her out, but its kind fun to get worked up over a crush. It's been so long since I've had one, but that's a story for a different post.

Here's a pic of a packed out Coldstone. I'm still not convinced they aren't selling crack. Place looks like a soup kitchen...

Here's the icecream store...
there's someone in line who should be jogging, but I wont' say who 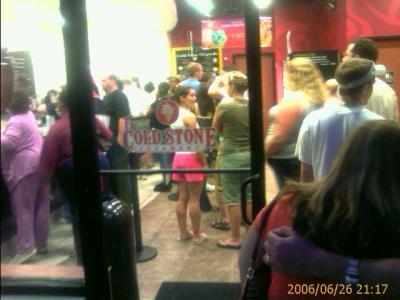 oh you crule (e:peeps)! it was me... I should have been jogging!

I managed to get in there when the line wasn't that bad. It was still about a 10 minute wait. I don't even want to know how ridiculously unhealthy it is. I think they should give you a free Lipitor with your spoon.

IF they are selling crack, then Timmy Ho's working the crystal meth market. I went to Cold Stone once and it was okay. I think the Krispy Kreme analogy works. Soon, it will be just another place to get some scream action.

seriously... what's the big deal?? It's just ice cream... We've had cold stone at home for a few years now... this marble slab thing is not a new concept. I had no idea people were freaking out so much... I mean sure it's good, but not wait-in-line-for-days good!

That's where we went... Condrell's. It was nice. Sit down service. No lines. The ice cream was tasty too, really good. I mean really I can't imagine that ice cream is any much better than Ben and Jerrys, and the lines at Wilson Farms are never this long.

seeing as my in-laws keep dragging us back to cold stone, i think i can qualify as an expert. the answer is no, their ice cream is *not* as good as the lines suggest, i'll take condrell's over them any day. cold stone is just buffalo's krispy kreme for 2006.

seriously, that is a looong line for a little icecream.

yummy. But never again .. not the size I bought and not on an empty stomach..never ever again! er..

Have fun with your crush. It *is* fun to be excited about someone--especially when it is a rare thing/ not easily interested/amused by anyone. So, yeh.. best of luck with that :)

Aww, having a crush is adorable. Everyone should have a crush on someone. Makes life that much more fun.

Everthing In Its Right Place

I'll let Thome speak for him self

This is for anyone who'd come back to listen to the song above again. Here's a special treat. The set list they played was totatly fan oriented (no radio releases), and they played a few new songs, one of which I captured most of. Have a listen, or get it on Gather.

Wow the second song on this post is on the new In Rainbows disk. It's called "House of Cards" and this was recorded/posted almost a year before it was out... man I'm cool ::blam:: (sound of my own big head exploding)

What Octopods Do In Their Spare Time

I recorded this at that ocotopus project show that was here on papa's day, before Radiohead. It wasn't as acusticly organized as the Auditorim Theater but this is some good music. If you like bands like RATTATAT you might dig these guys. I tried to get a video but bad light is the death of this phone. This is only a 30 second clip, and um you're going to wanna turn this down it's really loud: 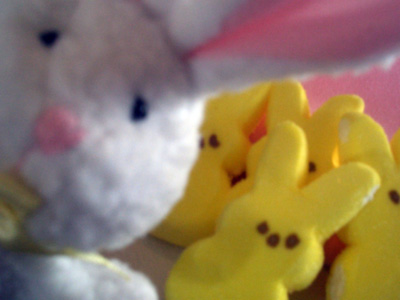 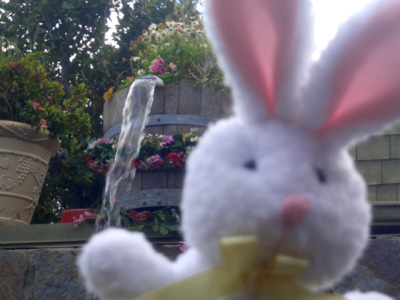 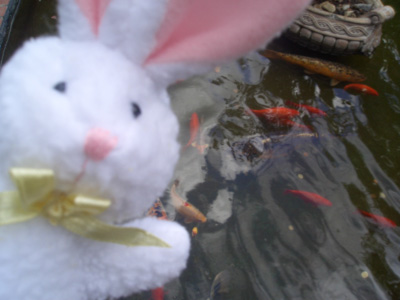 That post is adorable. I kinda want to pinch your cheeks now..

I really like them stale as well. In fact so many people seem to like them that way that I can't believe you can't just buy them that way. Next year we shoudl market pre-ripend peeps.

mmmm peeps... best served 2 weeks after opening the package, hard as a rock.

Wow that is the freakin' cutest bunny.