this met a cruel fate at my hands, another reason t o appreciate the dudes from Lloyds Taco Truck 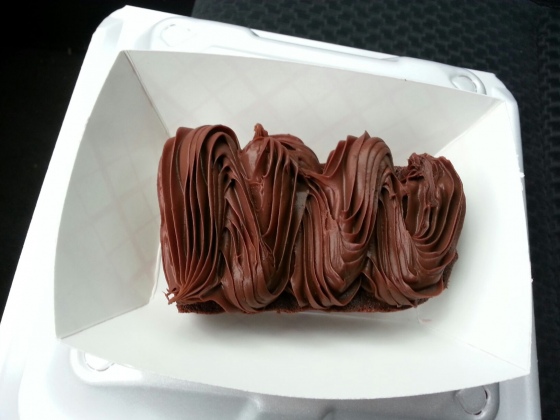 Not overly, there is a little kick to it, mostly from the espresso backed into the brownie. The frosting is grenache and together....um, yeah, good brownie

I really like Anthony Bourdain's tv show a lot. It's more than just food, but the culture surrounding the food. I also have a warm spot in my heart for those grilled atrocities at the Pink, the sandwiches that you know are almost ready by the four feet for flame that plume up. I know those can't be good for you in the dietary sense, but they are magnificent for the soul.

That said, maybe I've seen too much tv being made, promoted enough stuff with prominent folk, whatever, but it doesn't rev my engines that the Travel channel has come to down. Don't get me wrong. I'm glad we're getting some love and hopefully native guides will get Bourdain to places like Marco's on Niagara St, Betty's, the Anchor Bar (for the history since Duff's makes better wings) and places of that ilk. I like Bourdain's writings and the show is great as he isn't interested in kissing anybody's ass in particular. Any chef with an such a public appreciation of the Clash and Ramones is a good guy in my book, but the hubbub of a production isn't something I guess I would seek out. Don't let me rain on the parade if you are up for that sort of thing. But after one time, watching tv being produced in such locations can be about as exciting as watching somebody else play video games. Your mind can't help but wander a little. I've taken to watching other people watch the famous people, it's a more interesting take on the situation.

That said, somebody take Bourdain to Lagniappe's.

I am so not interested in the making of tv.... i think it would take out any illusions i have about the "magic" of it.

I would, however, drag my sorry ass through mountinas of Buffalo snow if i could actually see in person the hotness that is Anthony Bourdain. Yum. A tall skinny man that can cook, i mean, seriously cook, is more cynical than i am AND thinks the Ramones rule? *heavy sigh* If he were British, he would be perfect....

Of course, the possibility that his hotness is also the magic of tv occurs... so perhaps i should stay put.

I will admit that I have only seen his show like twice. The thing I liked about it was something you mentioned mike that it isn't only about the food it is about him being in the place and its culture and then the food. The thing I liked the times I saw the show is how it comes off as I'm this regular guy trying this random stuff that I have heard is good and we shall see. I have a feeling that there is so much Culture in Buffalo that it might be hard to show that on TV. It must be tough to pick places to go to. I just hope that when and where he shows up with Camera crew his kept hush hush even to the people who know that way it will come off as more, "hey never tried the canoli at sweet tooth I wonder if Russ's canoli tastes the same". I don't know much about the guy but he seems pretty daring, but maybe he isn't maybe he makes the people under him try things first, HA.

Normally I wouldn't be that interested in a TV show coming to Buffalo. But for me this is much different. I have read all of Bourdain's non-fiction books, and the guy is definitely my hero. Whether I will actually get the chance to meet him is another story. Everyone and their brother seems to know when and where he will be at all times. At least the buffalo restaurant insiders that I have spoken with.

Ah, it was a little chilly for lunch outside but a coworker of mine and I cared not. I blame (e:chico) . His journal about cheap eats got me thinking and we put those thoughts into action. Really good Italian lunch can be had if you stop by Chefs (and wait for the light to change) and keep going down Seneca to Ditondos. For $7.00 I got enough Shells and Ricott to feed me and well a younger hungrier version of me a second time.

Cheaper, quicker and flat out better than Chefs (bread is a little better too). I've lived here close to forever and never understood the Chefs hullaballoo. DiTondos has a nice little porch that almost makes you forget you are on Seneca St.

that's where i went last night (and every year) for my birthday!