The &quot;glamour&quot; of show biz

Given our heat of late, my adoration for my air conditioner knows no bounds, but it's unifying rumble drown out Delaware Ave fairly well. Of course, you don't sleep great knowing that it is happening.

Having done this a few times, I strive to make it easy. Pick out some clothes the night before to minimize the thinking involved. Alarm goes off and I groggily get myself together. I grab my glasses to use as coverage for any bags under my eyes.

One of the upsides to getting to Delaware Park at 5 AM is the abundance of parking spaces. Got a good one. Got inside, got a water bottle and headed out to let the reporter and crew in. Everything goes pretty well. Didn't studder, yet I talked with my hands a little much for an Irish guy. Sent them on their merry way a little after 7AM and still had the rest of the work day.

Got to book around 2, seized the day and did laundry, ran a quick errand or two and settled in a little. You know that is a funky schedule that you aren't used to when the couch feels a little too comfortable and all the dialogue on Top Gear sounds like mooje, mooje, mooje.

That was God's way of telling me it was time for bed.

the only time i see 5am is when i'm still awake because i'm suffering jet lag. bleh!

So I don't know what time you have to wake up daily. I have to wake early (alarm 4:30 out of house 5). But I can nap on the way into work for some time. What I will say is this waking up that early sucks ass every fucking day, their is no way around it. It also makes it tough to stay up. Why is all the good shit on at 10pm, HA. I'm not complaining I'm Irish so that means I'm a Hard worker. I like any one does the best that I can to deal with it. That being said I have no idea how you could be awake enough to be on film. I also have no idea how those people on the news can be awake at that time to ask questions that make sense. Channel 2 news blonde with the big tits Marisa Baily or something like that does the 5am news and then is on later in the day also, I have no idea how anyone can do that. Caffeine wakes up the body but not really the mind. In other words I'm complementing you and the news team.

Another week that was....

Another week in show biz. I occasionally have to remind me myself about the coolness of my job. We opened a new exhibit this week, and the opening, as always, is a festival of people watching. 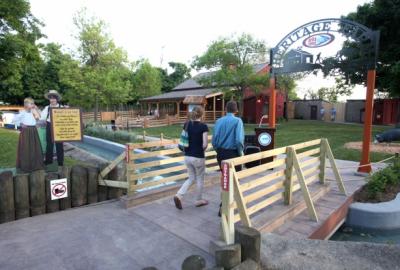 It's a pretty cool thing, especially for little kids. But given the structure, it is kind of oasis like since you're removed from the rest of the hubbub.

We do a lot of grip and grinning at these things, especially to donors and partners. The one thing I took away was politicians are worried. Most of the Erie County Legislature showed for the opening as did our two state senators and a couple of assemblymen (the latter seemingly unperturbed about the unfinished business in Albany). It intrigues me to sit back and watch a state senator bolt before the program even starts because it doesn't revolve around him.

Nice night, unlike yesterday where we opened it to the public where it's a good thing we had so many volunteers as we needed somebody to buy the food purchased for the occasion.

You may have even seen my rain sodden self avoiding the cameras yesterday morning.

In other news, my church had a religious education celebration this morning. The minister is on sabbatical, and the RE director is outgoing, so she couldn't be bothered to come.

That is a little dispiriting, but I got a favorite band to play at work two out of the past three days, so there are compensations. Just got back from a house concert in Hamburg. Made a couple new friends, heard some good tunes, nice abbreviated weekend.

meh, I'm taking the weekend off.

Guess it's time to convert. I'll see you Sunday ;)

Haven't been feeling it lately, but let's reconnect.

Pre-emptive break-up today. Between that and being greeted with the need for bloodwork, that may qualify as a monday.

That is an odd thing, but since our offices are over an exhibit, everybody got lined up for testing. Didn't run into that in other assignments.

Joked that the last time I stood in a line like this, I got a Roger Waters ticket at least.

Had a comparatively mellow weekend. The ex was out of town so number one son bunked with me. We had a nice dinner at Chez Louie's on Friday night, where we got into a borderline scholarly discussion on the state of Batman with one of the counter guys. It was fun to see my boy hold his own with another passion supporter of the caped crusader.

Speaking of my faithful traveling companion, he has been taking Capoiera over at Shakti Yoga for a few months. Last weekend, the studio had a happening at a spa in East Aurora. It was done on this semi-enclosed porch. While it was beautiful to watch and to see my son hold his own with all types of folks, I couldn't help but wonder if the little enclosed patio was going to lose its roof.

Fate is a funny thing, as a reward for his showing, he asked if he and I could go to Iron Man. I said yes, since I was suddenly free that evening. I was going to go with the woman I've been seeing to see of all things a cover band who did Emerson Lake and Palmer. She had the tickets then lost them to somebody who was going to take a husband. After I said yes to my boy, she texts me back and says I got the tickets! I write back that since you didn't have them and were going to study, when my son...blah, blah, blah. She went with a friend, who asked her out this weekend and next. So, my pre-emptive breakup. Iron Man might be responsibile to the latest detriment to my social life, but keeping my word as Dad seems a little more valuable. The shenanigans never cease my friends.

I think I'm headed to the b-movies tonight, near the left bank.

yes, being Dad is more important than a concert. but maybe she'll go on this date and think he's nowhere as charming as you :)

A few random thoughts from the week that was:

-The paving of Delaware Park's ring road started this week, lousing life up for those of us who work there. I first saw the sign Wednesday, revised for Thursday centered around all our usual turf. At this rate, I'll be paying my employer to park in our lot where it's safe. It will be fine in the end as it is nice to have a break from people who drive smart cars yet still manage to take up two parking spaces.

-Can't our cable provider get BBC America and CBC in HD? CBC for the hockey and BBC for the Top Gear? I'd be a happy guy.

-Speaking of Top Gear, the History Channel is going to take a shot at an American version, which will be a mistake. The quintessentially British car show is as much fun as it is because of the people doing it. Instead of American comics, do us a favor and show some from early launch. We don't always need to convert to improve. But at least, it's the History Channel trying because if NBC gave it a go, it would be doomed. One of the actual hosts of the program, Jeremy Clarkson, once told some tv writers that American audiences wouldn't get it. He's wrong, american television executives wouldn't get it.

-I think Joe Golombek might be on to something if he'd quit fighting Sam Hoyt and thought more about Antoine Thompson (not my concept, but I agree with wholeheartedly)

-Thanks to my company's stature, the loan I took has already started being paid back and I still haven't seen the check yet.

-Really don't care about the NFL Draft and the ratings/cash grab of two nights of prime time tv, which did serve to keep the Mets off it.

That's one of my favorites. A few weeks ago, they showed another extended episode where they were driving SUVs through Boliva. Been hooked for the past year or so, can't wait for the next series.

Rory got me watching Top Gear, I think it's hysterical! Plus they have lots of American celebrities on there, so why wouldn't American's get it? My favorite episode is the motorcycle ride from Ho Chi Min to Halong Bay in Vietnam!

I so agree with about the Draft, I have never watched it and will not start.

In Terms of BBC America I have an Issue with it. I admit I never watch it and it is because I got turned off by it. There was this show I wanted to see and it was ok these naked chicks are in this hot tub naked of course but there boobs are covered. I'm not sure what tier it is on but it should be with IFC and Sundance and not sure what then they should have an uncensored TLC channel and National Geographic channels. I get that british shows have different standards. If a chick is scantly clad it is a turn on but if she is naked and then covered up it is a turn off. This is true of those plastic surgery shows (not that I watch those). Then what ever programing you subscribe to you would also get as an HD Channel .