When Steely Dan released that song many moons ago, I don't think they were referring to the 3AM opening of Kohl's on Friday, Target's 4AM start or Walmart's midnight sale.

Does the success of your holiday hinge on getting a good place in line outside Best Buy in the middle of the night? Notice, I said holiday, singular, as it is one day.

Now, dear reader, lest you think I'm some kind of scrooge, let me assure I'm not. It's all good fun. I remember being up for quite a few showings of "A Christmas Story" on TBS as my wife and I assembled and wrapped the offerings for our three lovelies for Christmas morning. I'm pretty sure there is photographic evidence as to how healthy that was.

I guess I await the inevitable, the poor bastard who gets trampled in the doorway at Walmart trying to get a deep discounted HD television set. It tempers things a little.

I used to get a little frustrated with my own limitations financial wise when it came to the kids, but they've thankfully grown up with healthy perspectives in regards to the holiday.

I suppose the mania of early openings has good intentions. Being the skilled marketer that I am (yeah, right), I'd have my store run regular hours and let folks get the deals at civilized hours like 10:30.

I suppose that explains that come friday morning, I'll be sleeping in.

I don't think I have ever shopped on that day.

From what I've heard, the psychology of bargain-hunting (and, thus, marketing) is that bargains that harder to obtain and limited in time-frame are more exciting and seen as better bargains.

A sale is just a sale. But Black Friday is a once a year event. Or the marketing wisdom goes

Crowds scare me. I stay away from Black Friday. I'd rather pay a little more on some other day. But I'm lucky that way. For some people, Black Friday is wonderful. When money is tight, getting more for less is definitely a good thing. Sometimes friends and family get together, pool resources, and plan a campaign to maximize the savings.

I have a Feeling that you two will still be out so you will swing by Macy's at 3am......... Hope you have a great time and isn't there like a famous Parade or something?

In Terms of the early bird stuff. I have never done it. I think there are a few factors for why people do it.
1. The Fun of camping out for something
2. A reason to get away from the family
3. once the item is bought back to bed
4. There are some people who get a deal and that is so Joyous like a dragon in a cave with jewels and gold
5. The Main reason is for the huge Savings that can be Had. I heard a rumor that Target was having a Name Brand 40 Inch 1080p HD TV for like $300 not saying that it is true but that is a steel.
6. I often think Black Friday isn't about saving money and being able to buy more stuff it is about getting that big gift for oneself or the family.

I will be sleeping in I assume and going to see some movies, ok might go food shopping or maybe there is some deal that I don't need to wake up at 3am for......

I will be in NYC!!! I am so excited! My brother and I will probably make a crazy-involved breakfast. :-)

I know I can do better 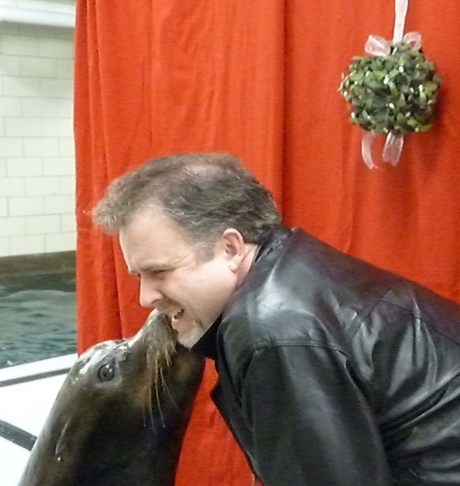 That is the COOLEST and the CUTEST picture I have seen! You look smashingly handsome. I agree with the Sea Lion. :-)

Ever been in a funk without realizing it initially.

Everything seems a little off, somewhat? Well, perhaps not, but it has seemed like that since, well, moving back to standard time from daylight savings time.

Haven't really slept well. Got hassled by Customs going into Canada? WTF? They are usually the polite ones. Went on a date that was such a train wreck we needed another date to confirm it. Listened to my boss pass out "good jobs" for a recent Halloween campaign at work to everybody on its sucess except the guy who created it and ran it (You guessed it), willingly took place in a media event thinking I'd come out of it with a decent souvenir for my troubles except my lovely coworkers hung me out to dry (so no picture of me getting kissed by a Sea Lion) (I know I can do better, but at my age, can I wait?). The night job has been a little stagnant, haven't work there (at the Arena) in a month, giving me an affinity to life as Patrick LaLime.

Think the time change affected a lot, still trying to catch up on that hour we were supposed to get back.

It will happen, just got to power through it. Made a good plan tonight though, made arrangements to take my younger daughter to Manhattan as a christmas gift.

Progress is a sign...just around the corner from the Light of Day, ya know? of course you do.

Sending a bag full of luck your way, (e:mrmike)!

Spit-ballin at the end of the week

Iâ€™m â€œshocked, shockedâ€ that Keith Olbermann gave money to democratic candidates. While it was poor judgment to be so blatant, an experienced guy like Keith should be able to learn a few tricks from his short time at Fox. Those folks know how to funnel New$corp, indeed. Buchanon and Scarborough helped the GOP, but since Olbermann has an audience, perhaps it is headline related. Take all 3 off and at least be consistent there, MSNBC.

Because she wasnâ€™t enough of a lightning rod as majority leader, Nancy Pelosi wants to run for minority leader in the next congress. After looking at Rep. Boehner, Iâ€™ve concluded that she isnâ€™t nearly orange enough as the gentleman from Ohio has enough spray on tan going, I suspect his office is run by oompa-loompas. Never mind that she was pretty lacking as a leader

Rogers Communications supposedly wants more Bills games? This surprises me as the apathy during a visit in August was palpable. I can only imagine the yawns as the Bills are on a road to nowhere with their current stellar record. This keeps up the promotion will be something like come see the mighty Pittsburgh Steelersâ€¦â€¦take on the Buffalo Bills. I donâ€™t think the Canadians are ready to attach â€œourâ€ to that sentence yet. Hope the folks at Fox Sports have some crowd noise prerecorded as the Billsâ€™ previous visits to the Rogers Centre have been almost librarial in their cavernousness.

There has been a gap in my ushering work at the Arena, which has been okay as my attention has needed to be extra focused on the full time gig in recent weeks. I think they need to put me back in soon as the home team hasnâ€™t had it since. If ever there was a case of the pre-season being a big ball of hooey, the Sabres are proving to be it. Last in the standings, as they commemorate the first year like playing its their first year. There has to be more soul in the room other than Ryan Miller, but I havenâ€™t seen it. Something has to change, else we just have a bunch of well-dressed losers. The contract policy about long term deals seems to have blown up in their faces as I bet Tyler Myers would like to see Hank Tallinder walk through the door. Has it really been eight years since Darcy Regier traded to get Chris Drury? almost. We need more than a few warm bodies to keep selling 40th anniversary tâ€™s.

Voting on Election Day brought back SAT memories, filling in the circles and waiting for the scanner to do its trick. The partitions for kids voting a few years ago looked a little more up to the tasks than the ones employed at my polling spot on Tuesday. Too bad the company that made the machines with the levers disappeared because between the paper form, the folders, the cardboard partitions, it didnâ€™t seem like an especially green way of voting.

I remember in 84 and 85 making tidy sums of college age beer money stringing for a handful of media organizations collecting voter information. A buddy and I drove around Olean to the polling places, reading numbers off the single big sheet that came off the back of the old school lever machines. Silly, yes, but no sooner than you can say â€œReporting live from Little Valley,â€ the Labattâ€™s tasted quite good.

In Terms of the sabres I wonder if this entire 40 year thing and all the new logos and everything have been a big distraction. I know the same thing that happened to me happened with the Buffalo Destroyers. Back then there was this new football team, now most people didn't know about Arena Football. It was a great game to watch on TV (yes I watched it before the destroyers at least some). It was set up for the family (cause bills games sure weren'). Buffalo was so excited and Pumped up and that 1st game was packed, and then the team sucked and you couldn't give away tickets, well ok you could but... If I remember correctly the tickets where priced like football or hockey Tickets. This is a major televised sport... This is I think what happened to me and many fans this season its the 40th year Myers and Miller and we are back to the Symbol we should have no stupid slug, We are High on the crest and then they can't win games so now no one cares... Well once I go to my 1st game on Sat. I'll get back into it well at least For sure I'll get to see one good Team, HA... Hope they give you some more work at the Arena and hope the sabres turn things around......

Totally agree with you on the Voting Machines, Yeah (e:Paul)'s idea is good. That being said I have heard that type of machine is easy to fix (voter fraud not repair kind of fix)....

I Find it tough to Believe that Rogers Center is trying to get more Football games up there, but it does kinda make sense. From what I have heard they still make good money on these games. What I think they think is that the owners want to go to 18 games. If that happens then maybe they get a Bigger Draw then the Bills like that maybe the Yankee fans would go see a Giants game...I don't buy that would happen. There are also rumors that the NFL wants to add a London Team and as tough as that is to believe if you add games to the season at some point expansion makes sense and that means that Toronto might have a shot at Its own team. I don't think a Bills team bought and Moved to Toronto would sell tickets or maybe they would buy the bills and sell trips to see them in Buffalo who knows, but they have some angle they are trying to work for sure....

Ya, I am not sold on the paper scan method of voting. Why not open source, peer reviewed electronic voting machine with a small paper receipt.