I just took my son to the movies and we're coming out and this woman is parking her car very snuggly up to mine, so I basically can't leave. I, of course, raise an eyebrow. She gets out and says "I didn't hit your car." I reply "Well, you didn't buy it dinner either, could you please back up so we can leave and you can horde both space?" She attempts the stink eye but does give me the room to at least leave the parking space without the aid of rubber gloves.

Pulling up Main and Goddell, the Doubletree Hotel van driver weaves a tapestry of obscenity at me when I chose to stop at the red light. Apparently, I should have gone through to the light and taken my chances with the traffic coming off the 33.

Maybe it's me. I was running some saturday morning errands earlier and it did seem like idiosyncreasies amuck on the roads today. Apparently, if you are going to eat at Pano's, you have to park in their parking lot and road rage when you try to leave it. It seemed to be a theme. And watching the same site get replayed at the Co-op was kind of hilarious.

(Folks, just take a space on the street, it's the weekend and it would do your fat ass good to walk more than 10 feet to each establishment)

I took in the Auction benefitting Give for Greatness (the arts group) over on Amherst Street this morning and had to drive around the shapnel of a fairly fresh accident at Delaware and Amherst, and nearly got pegged by somebody making a left, from Amherst, who was so semi-circling it, he was mostly in our lane.

My eldest daughter is learning to drive and doing really well. And funny enough, it's not her I'm worried about.

I'm a walker and a Buser so I only see a tiny bit of crazy drivers and parking... There are a few places that walking is a half to but where things can get a bit crazy... But the one thing that It seems no one knows how to do is stop at a stop sign... The Roll through is a classic and the other one is just as bad they get there before I do and then they sit there for like 30 seconds..... I wonder if these new cars that will park for you if they will make this parking thing you went through better or worse?

On a side note hope you found some art that you really like and had the money for... Sometimes that is tough .... And at the same time wound up giving a bunch of but not to much money to Give for Greatness.... Or at the least pushed the asking price up some :)

It's not you. I blame Reaganomics. There are lots of children born in the 1980s on the road. I don't think that ketchup is a brain food.

My driving day wasn't as bad as yours but I did have several cars near me that did not seem to understand that driving like you have a tattoo that says "Merge or Die" isn't a good idea.

An Irishman goes into the confessional box after years of being away
from the Church. He is amazed to find a fully equipped bar with
Guinness on tap. On the other wall is a dazzling array of the finest
cigars and chocolates in the world.

When the priest comes in, the Irishman excitedly begins..."Father,
forgive me, for it's been a very long time since I've been to
confession, but I must first admit that the confessional box is much
more inviting than it used to be."

The priest replies, "Get out. You're on my side." 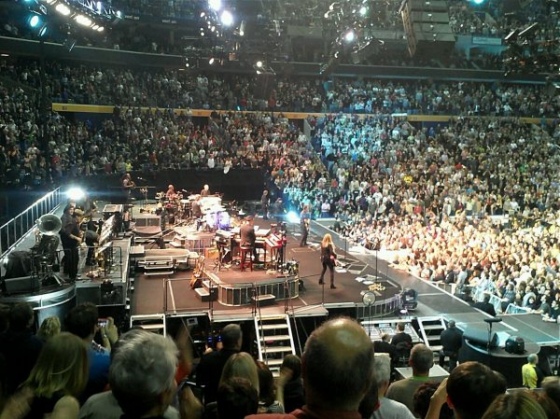 A discussion after the joyful noise that was Friday's Bruce Springsteen and the E Street Band show let to a friend asking me what does it for me? Why do I keep coming back? Why I have I seen upteen many shows? Still beaming like an idiot from the 3 hours we just witnesses, part dance party, part political convention, part tent revival, part depraved abandoned, part baptism, all I could say was"All of that." Early on in the show, Bruce promised our feet might hurt, our backs might shake, and you might still grin about it. One of my favorite television characters once said about great oratory "can lift whole houses off the ground." I feel the same about performance of all kinds, but especially about Mr. Springsteen.

It's always great to hear songs you've always loved when they are performed with such conviction. The 19,000 voice singalong for "Thunder Road" is still in my head two days later, but the new songs and additional musicians that came to bring them alive were equally essential. I was a little worried about that after not really liking the Bruce record. I remember watching one of the televised Rock and Roll Hall of Fame induction ceremonies some years ago and the Mamas and the Papas were being inducted. They had so lost a step that 8 singers were needed to help back them up. Springsteen and the E Street Band don't need the help. The horn section, extra singers, percussion added to the fact that something new was being said, and despite it all "the rich guitar player being given a pass" was still a man of the people. And this people was still all too eager to be a part of something larger than himself. Collectively, we've all be at it awhile, and it was nice that the folks on stage haven't lost a step.

There were a few presents for us long time kooli-aid drinkers: "Point Blank" appeared and the last time I heard it live was in 1980 at the Aud, "Rendezvous", which has only be heard on my Ipod and "Mountain of Love", which might have been on the first bootleg I ever purchased. It was fun to see young fans enjoying the new material and the mix of other songs was pleasing to this old pro. Apparently, we nearly got an "E Street Shuffle" according to a set list making the rounds. But, it's all good. It's embarrassing to want so much from music (as the man himself once noted), but when you get "it" there are no words to adequately describe that happy, buzzing sensation of your soul getting a musical feast. And to be a part of a 19,000 voice strong chorus on "10th ave Freezeout" just seals the deal.

Back to my friend's question, it's the music and the way it's performed that gets you, gives your soul a stern talking to, and takes you to places you can't give directions back from and a night on E Street is a sure a bet as you can get.

They have a similar effect for me. It's why I enjoy the shows the Maniacs put on

Well written, (e:mrmike)! I feel the same way about the Dead. It's the closest I get to church.

You got an irish guy and an italian guy sitting at the bar. After a few drinks, a predictable argument occurs. â€œYouâ€™re so stupid.â€ â€œNo, youâ€™re so stupid,â€ â€ No, youâ€™re so stupid, I bet you probably donâ€™t know when Easter is.â€ Money get placed on the bar, bartender comes over and the pressure is on. Gent steadies himself, stands up, takes a swig, clears his throat and announces â€œEaster! is when Jesus Christ, rises from the deadâ€¦..rolls away the stoneâ€¦.and, if he sees his shadowâ€¦.â€

Yeah, but who won?