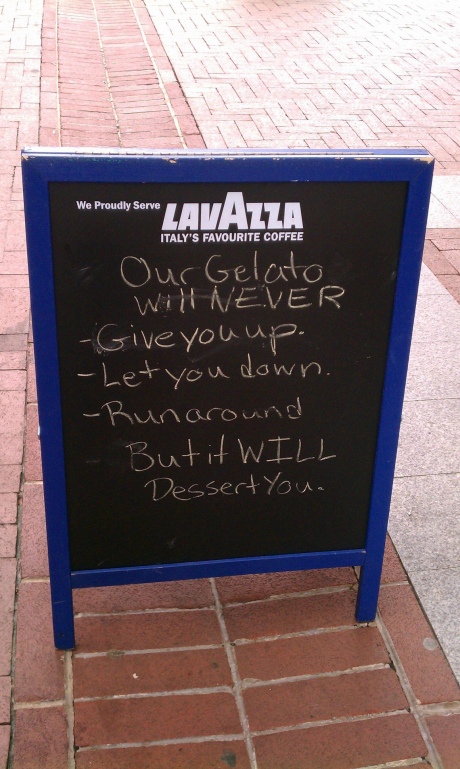 hehe funny you say that (e:vincent), that's hitting very close to how I feel about the 2 latin american, 1 starbucks and 3 european blends in my freezer right now!

I have tried LaVaZZa before... but I can't remember what it tasted like. I need to taste it again. They have it at Guercios. I think the coffee was good, or maybe not?

I didn't get it the first time. Then all of a sudden the song popped in my head when I read it aloud.

That is so clever, I wonder if they thought of it.

First Picture of Me that I've liked in awhile 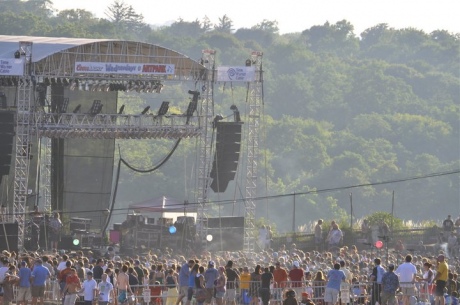 Nope, I'm in white, she too is in white, and a sercurity guy is on the other side of her

You with the superbly white shirt and your friend with the Kiwi yellow shirt?

Sunset on the Water 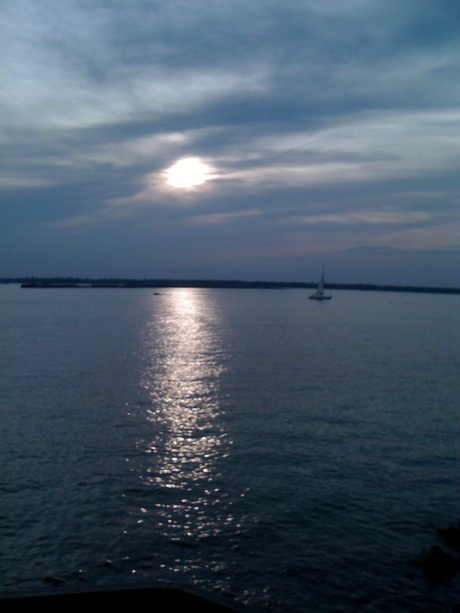 Had a nice kayak ride in the river Saturday. If you have never partaken, I highly recommend it. It's an inexpensive rental at the harbor. I have all the boating skills that an elephant would have on a tightrope and had a grand time, even managed a snap shot quickly taken underneath the skyway. 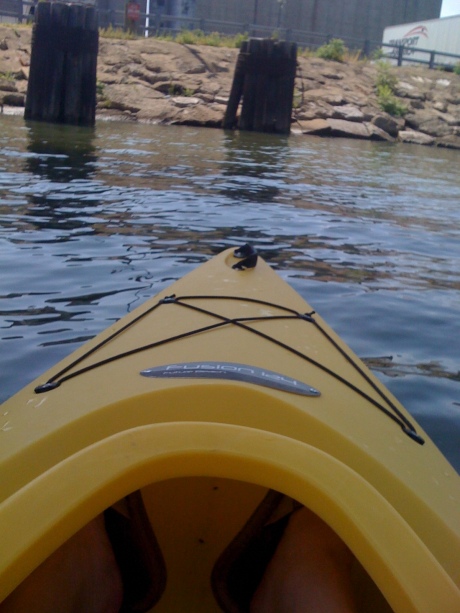 Ya the pic is great. Would male a nice phone background.

I like the fact that I didn't drop my phone or the paddle in the water ;)

Hate to see Borders go. Back in the day, when I worked for a book publisher, our CEO envisioned news like this. It was a little hard to imagine because in the early to mid 90s, the race to build bigger better bookstores was fast and furious. We had to gear a lot of efforts towards things that would be pleasing to Borders, Brentanos, Waldenbooks and Barnes and Noble.

Less places for actual books is like neighborhood record stores going away, the material is still out there, but it is kind of sad to see it come to that. Given expense, my awareness of my neighborhood library has returned, because I guess Iâ€™m old school, something about the experience of having actual pages to turn.

I donâ€™t have any issues with Kindles or Nooks. A colleague even successfully stripped a nook of its software and replaced it with Android software and it runs like a champ.

One of the greater parenting cons of all time was my dad suckering my siblings and me when we were kids. We would hit a branch library pretty regularly, but special occasions meant â€œDOWNTOWN!â€ Hidden treasures could be found on various shelves that rarely met the racks in Clarence. I know you can arrange that now, but when youâ€™re a kid, finding something cool on your own is a joy that canâ€™t be adequately described here.

That was the cool thing about the big stores like Borders. Sure, Amazon has everything under the sun and then some, but places like Borders would have something right there. I wasnâ€™t there a lot, but appreciated what their efforts. It was never terribly important that â€œSeattleâ€™s bestâ€ was brewing in the corner, but after getting my son all hyped up to help me find the latest Tom Robbins book, to the point of chanting â€œB is for Beerâ€ as we entered the store and finding it was pretty cool.

One less venue for that, so that is a little sad.

Yes My pictures are nice..... But they aren't the same level of a pro in a book.... Again power goes out and things that are digital go poof. When China get sick of our shit and they could and they invade and control our internet and tell us what we can and can not read on line. I can write anything I want in a book and give it to someone. Sorry Tiny but digital isn't real..... As much as I love estrip if we get wiped out and some other animal becomes the new versions of humans and they figure out what we wrote they can read our books but all the digital stuff is gone.... If it is important write it down......

I think that is primary the reason they are closing. People who really spent money on books at those stores (and didn't go there for coffee and hanging out alone) are getting wiser with their book investments and investing in e-books and readers.

I don't know about you but I look at pictures on Flickr and Picasa and a certain (e:metalpeter)'s blog all the time while I drink coffee.

Actually, we are fast moving into a solar-powered e-reader age, so power won't be an issue until the sun dies (and we will have bigger problems than those that are covered by e-books or survival books then).

Necessity is just code for loss of creative thinking...

@Tinypliny I forgot another point sorry.....

I don't have any but what they call Coffee table books often they are photo books... Big Picture books just don't do the same thing and when people visit they see them and look at them and read them can't do that digitally.....

Now in terms of why they are closing I have 3 reasons....
1. It started with audiobooks and moved to Kindles and Amazon dot com where you can look up what you want and it is shipped and some cities there are websites you can get it the same day....

2. I went into boarders and saw this nice little spot where they had a nice places to sit and you could drink.... But somehow I don't think drinking and reading a book and not buying the book brings in very much money?

I don't think Paper Media is going anywhere and here is why....

One Giant EMP and everything is fried .... See digital is great but once you lose power it is no good... Now you could say that well you get a Battery but when the entire US grid is out cause we stuck our nose into some countries affairs we shouldn't have the batteries won't last long.... Now see a book you can just turn a page and figure out how to survive.....

But the other reason is that Good paper books last longer then digital stuff and there are things like records and accounts of things that happen that need to be kept on paper....

I keep misusing the apostrophe in the possessive "its". AAAARGH.

I feel slightly sad because like you, I had some fun times at the origami club. But... I feel like a hypocrite because I don't read paper books anymore. In fact, I don't read paper anything anymore. If more younger folks are following similar patterns, bookstores need to evolve their strategies as well. I am sure there are plenty of valid arguments against the digital age, how the smell of paper is just unique, how e-screens cannot beat paper ever, but the facts are plain and stark. Regular paper media is reaching the end of it's lifetime.

I am not much of an upscale bookstore fan.. but I love libraries. There is more community in libraries than any other establishment and financial status does not figure into usage.

whole chain is going away

Which Borders branch is this? Are all of them closing forever? We had a fun origami club at the Borders in Roc.

Remember when you were learning to drive, and more importantly, learning to parallel park? Yeah, me too. More importantly, remember waiting while somebody finished parallel parking, since you know there might be traffic coming the other way. Yeah, me too. Iâ€™m not sure when it happened, but apparently you are supposed to just go around the poor devil who is trying to park. This is troubling to me. If you take that chance, what if the parker messes up and needs to come out? What if you are the parker and the guy in the Humvee canâ€™t wait and comes close to hitting you because he HAS to beat the trafficâ€¦.into submission?

I see this on Elmwood all the time and watched as the folks at the marina over the weekend were routinely breathing down each otherâ€™s necks seeking parking. Relax, yaâ€™all, weâ€™ll get there.

Great slate of music in the area for the summer at next to no money. Itâ€™s funny since Western New York is such a sun starved people, there is a high population of folks who take in a show, not to see the show per se, but being seen at the show or saying they caught it. I was struck while mostly enjoying Pat Benatar by the sheer amount of people, just there, not particularly for the show, just to be there. I had a crappy vantage point of one of the tv screens for much of the night and dumbstruck when a sloshed woman came up to ask if I would be move because she couldnâ€™t see the screen from her chair even further back. Itâ€™s a concert not a movie, fool.

Social Media can be a funny thing. A guy who decided sight unseen that an untested intern would be better at my job than I would some years ago, now wants to be LinkedIn. That makes me chuckle as only one of us is working in this market.

Not going to weigh in on the Casey Anthony case, as Iâ€™ve come down with a bad case of disinterest.

Its crazy how much I enjoy blogging but hate social media. Linkedin is the worst.

Okay, you say it without looking at it and it sounds like a bar on Main Street with a two drink minimum between City Lights and the Jam Club, but it is the Water Taxi, that I admit from a distance to me looked like the Mini-Me the Miss Buffalo never needed. But before Iâ€™m branded a neigh-sayer or anything bad buffalonian-esque, I shoved my semi-willing young son on for a lap around the waterfront. I thought weâ€™d a two hour ride to inner and outer harbor, but it is one of the other. We happened to hop for the inner harbor jaunt, but it was still a groovy ride. Got out onto a bit of the open water for a bit. along with some different perspective of the city, so I said the heck with it and played tourist and took a few pictures. 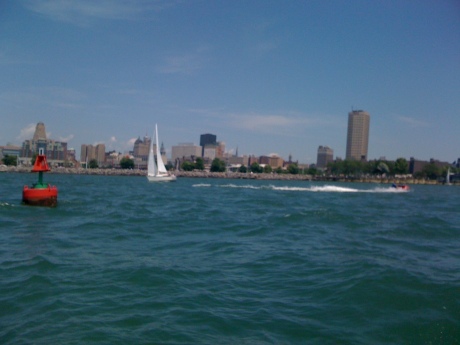 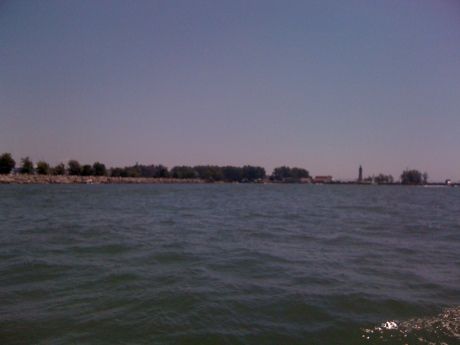 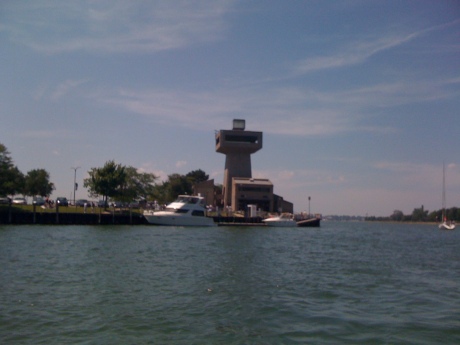 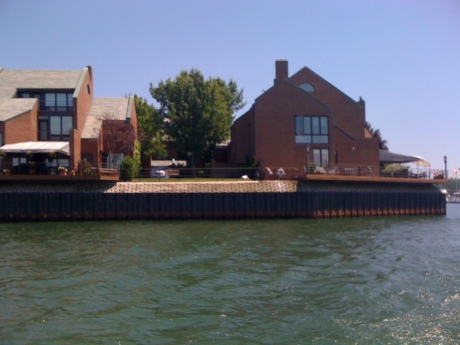 There are a few more over at mikespub.wordpress.com, but you get the idea.

Can you take a bike on it?

Looks cool. Is it expensive?