Iâ€™ve been paying casual attention to the World Cup and a couple things struck me.

The English soccer team is, as somebody already pointed out, like what Notre Dame is to college football, not nearly as good as advertised but they are there largely due to their own implied right to be there.

Itâ€™s not the horns that bother me, itâ€™s the crappy officiating and blatant overacting. Some of the attempts at drawing penalties have been such blatantly bad theater youâ€™d think Leonard Pimpf Garnell was doing play by play. Incredibly, the refs fall for it. I saw a guy get nudged in the chest and he covered his â€œeyesâ€ in pained hysterics. Get up, jerk.

Not a fan, more of an appreciater, I wish there was a little ambiance for the English major leagues. I remember watching broadcasts on Channel 17 on Sunday mornings that inevitably my Dad and I would mock. If Arsenal got up too much, their fans would start serenading the opposition. Nobody says â€œYou ugly!â€ like a chemically serene football fan.

The US is out, but they gave it a good run, going deeper than ever before. Since they lost, there have been calls for the head coach, how he should be replaced, yada, yada, yada.

Itâ€™s a game, everybody should take a deep breath. Itâ€™s okay. The whole idea is to do your best. Isnâ€™t that what we want to teach kids coming up. Shouldnâ€™t we be happy that we made progress and our guys were among the best in the world? Thatâ€™s a pretty good dayâ€™s work in my book. No shame in Ghana snagging one from us on the pitch as next time we see em on the ice, they are so our bitch.

Cops is filmed on location

Well, just how you want to start a Monday...

I knew something was off, as I woke this morning feeling pretty good. Pulled out of the driveway with the car filled with a really nice version of "Bartender" by Dave Matthews coming from the cd player. Nice vibe for the short drive into my office.

The local gendarme has taken to parking a car at the exit of Delaware Park for some official reason, I think, mostly to garner some extra change.

I follow rules of the road and pull up at Amherst and Colvin and out of my side mirror see a police car jockeying for position, but it was unclear as to what he was doing. I turn into the park on Colvin and he fires up the lights, looking for me.

The kind officer wanted to know if I knew why I was stopped and I honestly couldn't tell him. Apparently, back at Nottingham and the Park's exit, it looked to him like I was on my phone talking.

My phone was resting my pocket, where it wasn't used since Sunday afternoon. After he discovered that, he asked me about hands free devices, told him I don't use any as I don't take calls while I drive.

With that I was free to go, without a ticket. I guess the lack of a ticket was his apology for wasting both of our time, embarrassing me (as my boss drove by during my bust) and of course, being wrong.

Heck of a way to start the day.

Still a classic!!! I love the anticipation that builds... "We had a ball!! ...UNTIL..." and somehow the payoff is there (the conniption). Thanks (e:mrmike), and Happy Father's Day!

The Zoo's annual creative black tie fundraiser was Friday night. Long day, but a festival of people watching. Doling out the champagne to the stars was your favorite celebrity bartender....me 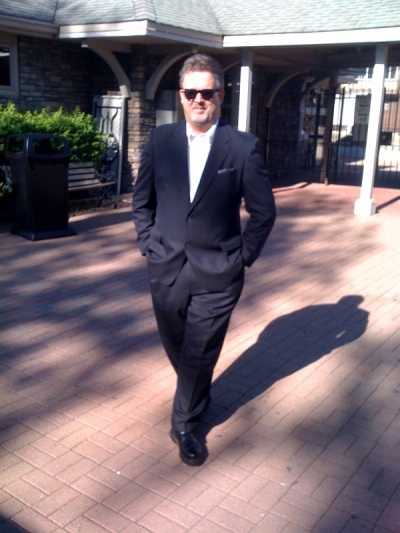 Absolutely no truth to the rumor that I was employing the "two for them, one for me" method of pouring...well, almost none

what I meant to say is - So it is true you being a sharp-dressed man and everything, do you drive the girls crazy? I don't know how that uncutsanflush got in my earlier comment.

So it is true that nothing drives girls crazy like a sharp dressed man? <g>

It's the end of the week and this is what I have lingering in my mental pockets:

Refusing help with the BP spill? Sounds odd, but check this out

If somebody has an idea, it seems like help would be a good thing as the folks at BP are looking like Oil Executives in headlights. The never-ending news cycle has folded into name calling between Brits and some Americans and that seems silly. If the Belgians have an idea, bring it on.

C'mon Aaron Schoebel. I respect wanting to be close to the family. If you still want to play, but closer to home, say so. If you don't want to be a linebacker here, say so. The mealy mouthed "It's in the Bills' hands" rings a little empty, like somebody is watching over a bonus payment.

Pulling into work this morning, I got to see first hand the after effects of the Corporate Challenge, you know that race celebrated with lots of beer and bratworst? Given the high population of Sea Gulls scaling the mound of trash bags on either side of the ring road, it looked like the Challenge was sponsored by Alfred Hitchcock.

That amount of birds does make you think twice about where you park your car.

My employer is holding a creative black tie dinner tonight and in my email I got an inquiry from a business associate wanting to know how to dress.

Found tickets for Paul McCartney in Toronto. Seems like a good show to break in my Beatles appreciating son into, I mean, who's first rock concert is a Beatle? Hard act to follow.

Remember how the new Peace Bridge was supposed to be done around now? The legal funds of the few blocking the needs of the many.

Good for the Blackhawks and their Stanley Cup win. I didn't have a side in that series, but as hockey playoffs go, that was a great series and all praises to Pat Kane. He's adjusted to life in the spotlight pretty well recently and looking for family and remembering where he came from were great notes to end an exciting game.

Allentown Art Festival starts tomorrow and I can't help but wonder when the art gets in. All the soul is in Allentown west area where some great music and actual craft takes place. Don't need to stand shoulder to shoulder up Delaware for the sake of looking at largely generic sofa sized offerings.

Partook of some LaNova pizza for the first time in ages last night and circumstances lead to pizza induced bliss. My stomach was in its happy place for the rest of the night.

Where is the Save the Gulf telethon? The ineptness of BP's response has wrecked the area for untold years even if all the oil magically disappeared as you read this?

Got to get to the store (hence, the title)

Gotta Chime in on 2 things:

1. Artfestival: The west part is nice and everything but it is way to packed, the street is to small and the booths stick out to far and walking down one side of it takes about 20 minutes. I like Allentown but often the stuff I like is out of my price range. I'm hoping they have some new artists there with some cool stuff. Well there is some stuff that I all ways go that is great, but it isn't my style or wouldn't look right on my walls. Speaking of that I wish they sold more wall space, HA. There are local people there to, I seem to never get one of those Broadway college things, maybe this year.

2. The Blackhawks: It is nice to see the Entire Patrick Kane thing. I didn't want to root for them cause than they would lose. So I watched and cheered once they made the finals. I used to be a blackhawks fans for a little bit of time.

Sorry I missed the shenanigans on Friday evening. I had three events simultaneously on Saturday, with one of them getting going before 7 so I needed to be something resembling good so I made do with a couple quiet drinks at the Sportsmen Tavern in front of one of my favorite bands. Set a good mojo for a horrific saturday at the office. Had to play security guard, first aid administer to a panicky deaf boy, bouncer, huckster and more. All of which left me spent last night. Sat on my porch listening to middle aged knuckleheads yelling "Opa!" as they waddled from the greek festival to the safety of their suburban bound SUVs.

Great parade today, despite the weather. Got a decent shot of the oncoming parade along with some dashboard photography from last weekend. 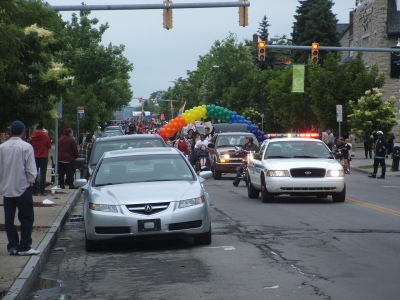 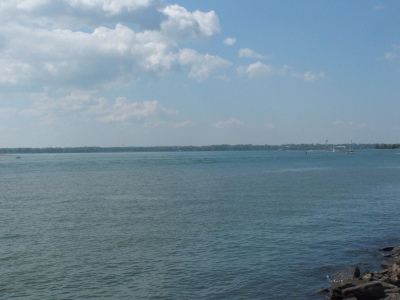 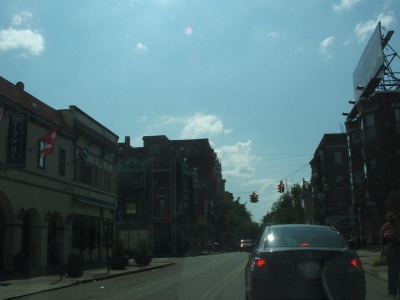 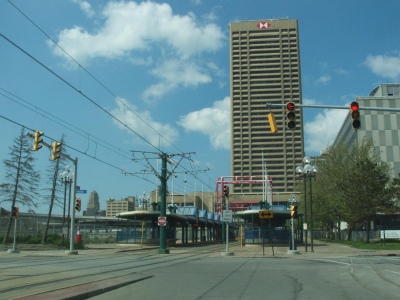