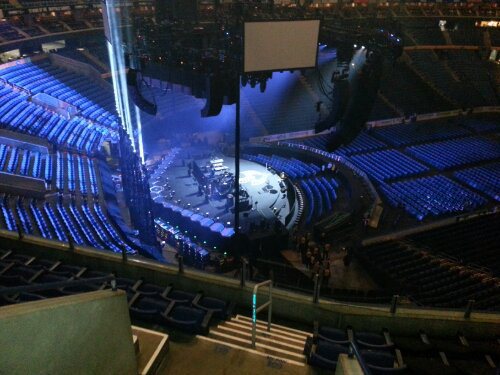 This was my perch for Sundayâ€™s evening show with Bon Jovi. While watch both show and crowd, I managed to come to a conclusion. Iâ€™ve worked as an usher for a variety of different events as it is usually fairly easy supplemental bucks. Whenever a concert comes up, everybody hopes for an uneventful night of hopefully folks just enjoying the show.

While Iâ€™m not a huge Bon Jovi fan, I respect â€˜em and for what they do, they do it well enough. They put on a good show and the masses were pretty happy. Itâ€™s a kick to see bands that have been around long enough that the generations share them. Mother and son sat in the aisle near me and it was a hoot to see the lad (all of 9 or 10) enjoy the tunes while his mom â€œenjoyedâ€ Mr. Bon Jovi. I I did learn a few things last night. Apparently, when Jon mentions that heâ€™d like do a song from album that is about to come out soon, that is apparently code for â€œItâ€™s now time to run to concessions, get a couple of eight dollar beers and you wonâ€™t miss one of the hits.â€ Those were some getting up and wandering around fans. People were headed up the aisles so often it reminded me of the Sabres crowd the night before.

I guess I was just jealous of their well financed errands to the concession stands, a lot of damn money for Blue Light I tells ya. Things seem a little more tense than the sports events as the evening unfolds and then it dawned on me, concerts inside are like night football games at the stadium. It was pretty mellow. I had to laugh a bit, when a chemically serene customer stopped on her way out with just a few songs left to announce that â€œSir, sir, there might be drunk people up there, just so you know, just a few feet in front of usssss!â€

The security office, near the parking ramp, has applications. I took a shot a few years ago and got the call. The Event Coordinator liked my day job so she called.

How do you get involved in that? Do you have to know someone or can anyone apply?

So, occasionally, you get one of those years...Marked another birthday last week and with a variety of obligations, managed to stretch festivities from Super Bowl sunday to a couple nights ago and the bulk of them sort of sucked. But you move on.

Met up with my sister for dinner at Rocco's in Clarence. It's owned by the same folks who own Sienna and a few other places and it was alright, nothing I'd go out of my way for. It had dubious beginnings. I called to get directions and the voice on the other end of the phone explained that they are in a strip plaza. I wanted to scream "No kiddin, as all of Transit is a flippin strip plaza there skippy.

Anyhoo, a few days earlier, my ex and I walked down to mythos for a late sunday brunch. I was intrigued to see that one of the offerings was Turkey Benedict, eggs benedict without the canadian bacon. I thought I'd give it a whirl, except the hollaindaise was made a lot earlier that morning. It and I had a parting of the ways in the mens room.

And so it goes, after a prefunctory party on the 8th at work, as we have all been beat down by our board of directors, my taste was gone, but a week later, I'm here doing online shopping as my mom-in-law (we all still family) hooked me up with amazon dollars and my folks did likewise from best buy.

Better love story than Twilight. Saw it when I went to Wreck it Ralph.

That was really cute.