One of the beautiful things of having relatives smack in the middle of DC is you can select your historical moments without a whole lot of advance planning. With the inauguration of President Obama, my former spouse and I thought it would be good to take our kids and just be part of the moment. Given their racial makeup, it was a once in a lifetime thing. Given a horrifying ride down the night before, I was ready for a little lackadasical adventure. Essentially, we walked a few blocks and were in Obamastock. It was fun to just see all the hullabaloo. We didn't stuggle to get into certain places. Things just seemed to happen all Ferris Bueller like, just right into place. The feeling of hope made everybody friends. After eight years of Washington induced fear, it was a beautiful thing to see the city (both of them) so friendly. 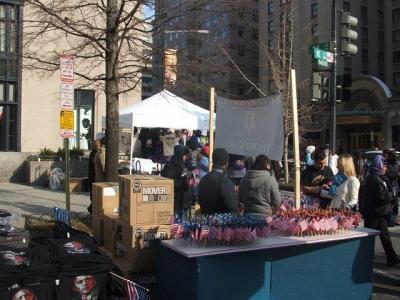 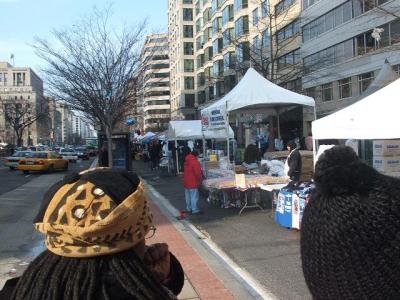 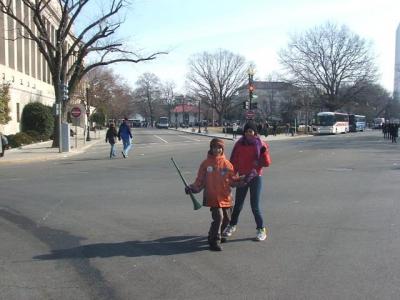 My Eldest and Youngest having more fun in front of the Department of the Interior than is usually permitted. 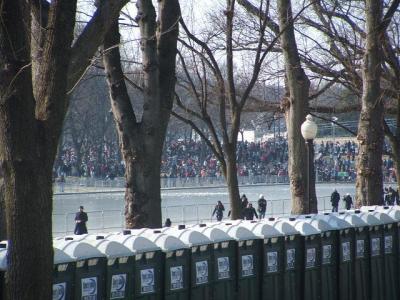 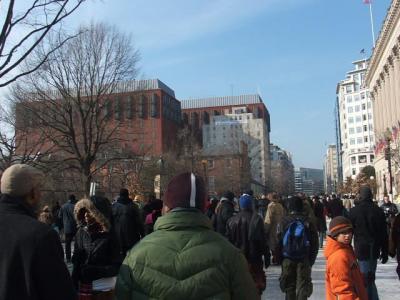 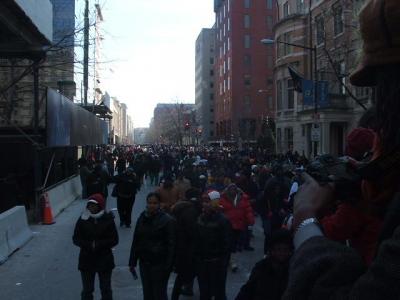 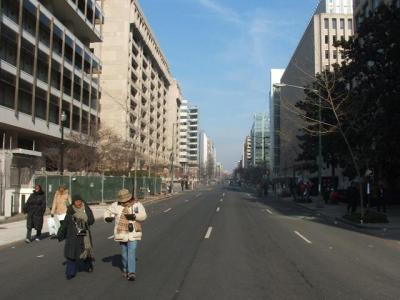 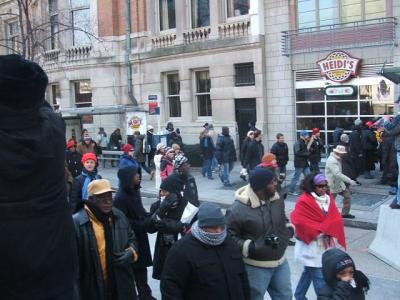 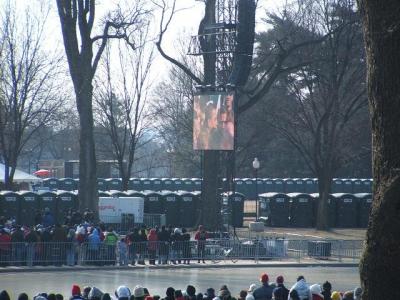 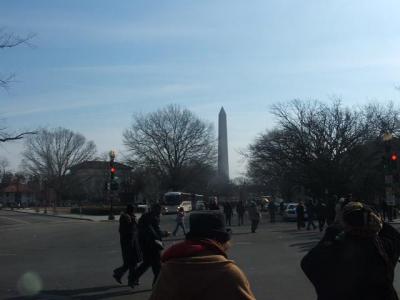 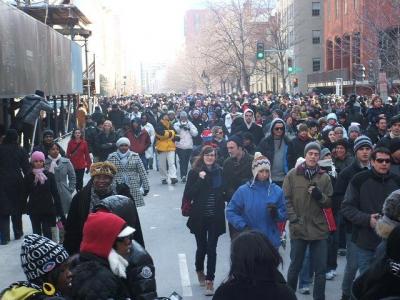 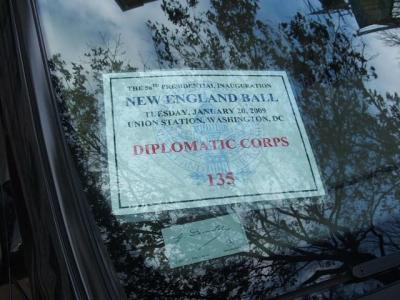 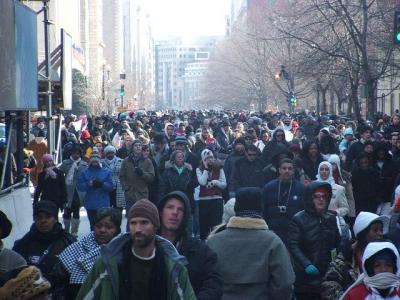 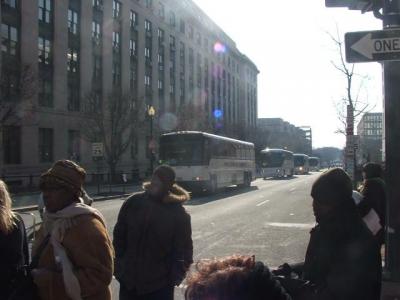 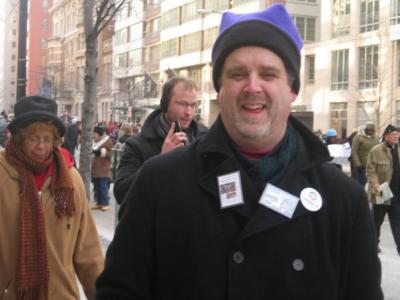 I do remember you posting pictures but don't think that I have seen any of these ones before.

Kind of puts this electoral nightmare in perspective a little bit 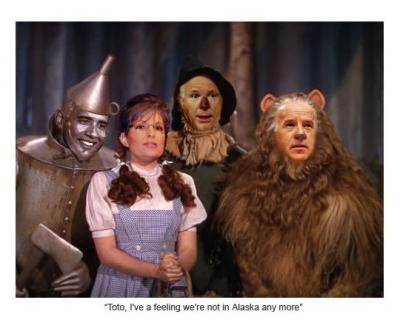 Just in case you haven't seen it yet...

While suturing a cut on the hand of a 75 year old rancher, who's hand was caught in the gate while working cattle, the doctor struck up a conversation with the old man. Eventually the topic got around to Palin and her bid.

The old rancher said, "Well, ya know, Palin is a Post Turtle'".

Not being familiar with the term, the doctor asked him what a 'post turtle' was.

The old rancher said, "When you're driving down a country road you come across a fence post with a turtle balanced on top, that's a 'post turtle".

The old rancher saw the puzzled look on the doctor's face so he continued to explain. "You know she didn't get up there by herself, she doesn't belong up there, and she doesn't know what to do while she's up there, and you just wonder what kind of dummy put her up there to begin with".

I look forward to seeing if I still think this way after the debate tonight, I wonder if these two will get that they are talking to each other and not just giving there side of a debate and make eye contact and not be all about who is watching.

OK - that was pretty good, and would be really funny if it weren't so scary.

I have heard this from a few different people, and I can't stop lovin' it.

Besides being thick-skinned and hard-shelled and slow.

How it looks after last night's debate 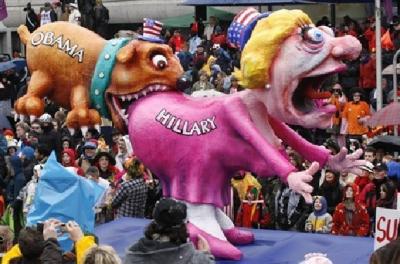 I can just hear George Stepenopolus at the next debate "Senator Clinton, watchya gonna do with all that junk? All that junk inside yo trunk? 30 seconds to respond."

Wow - what a round and plump ass Hillary has!

Clinton: &quot;Screw it, I'm in

Got to love the Onion

I have an idea the amendment only says President twice with all the work he had done with Bush Sr. why not if she gets the nomination go for Vice President. What would be cool about that would be if Hillary won and something happened someone other then the VP would take over power or maybe he can do more as the first man.

With the way he has been running for Hillary it isn't far from the truth.

Got to love the entertainment value if Bloomberg gets in...

If he runs he is going to make it very interesting for sure. All that data crunching from those Bloomberg Terminals give him something to go on, I may fly to Vegas and put something on him to win.

His appeal is that he's a not a religious wacko and he's ultra business. It's sad but people trust business more than government. So someone that basically built the data analysis system for Wall Street has the admiration of most Americans. That gives him an edge over any Democrat that is still left in the race, since they're pretty much just government resume only holders that never made it in "the private sector."

Yeah, the whole Unity Party thing seems to just be fake grass roots cover for him to run.

I wouldn't be too sure about his ability to draw off support from Republicans. I interact with right leaners of differing commitment very frequently. I have heard not one peep from them about Bloomberg. He is off the radar. And why wouldn't he be? Everyone knows he is a Democratic, and why he ran with an (R) next to his name.

I don't know where he gets support.

Oh I agree, his candidacy won't change the nature of what's already underway. I
don't believe he'd win in this current climate. My innner-rubber necker likes
watching what his presence would inspire on all sides, given that both he and
his billions are too large to ignore.

It'd be fun to watch, not that it would solve anything, but it would be
entertaining.

This election doesn't feature a huge group who is disenchanted with the Democratic party. He'll draw off support mostly from the Republicans, but like James says not from many of them. The Democrats are really fired up for this election and getting on with a life post-Bush. Bloomberg needs an electorate disenchanted with the status quo on both sides.

The problem with a new centrist 3rd party or candidate is that they still must schizophrenically deal with all the same issues that drove the Left and the Right apart to begin with. How does this Unity party handle abortion, war, economic and health policy?

Any good workable ideas will be sucked up by one of the main parties leaving the 3rd party with just the unresolvable ones.

I don't understand why a New York City Independent/Really-a-Democrat-but-technically-I-was-a-Republican would think he has anything to contribute to the race. I like Bloomy, I really do. But he is not fiscally or socially conservative at all. He has no real centrist appeal. If he runs it is because his ego is getting to big for NYC.

I don't wax on politics too much, because it is almost too troublesome these days. The will of the people demanded change in Congress and we got folks too spineless to change anything. Nobody has much nerve. I've been paying a little attention to the county executive race to see what is going to happen in our post-Giambra world. The two leading democrats are behaving like a couple of 2nd graders (and I do apologize to any second graders cuz you deserve better). Paul Clark and Jim Keane are sniping at each other at such a clip it is truly impossible to know what either one stands for. This is particularly disappointing in the case of Keane. I worked on his 1986 congressional campaign when he nearly beat Jack Kemp and he talked in specifics. This election is sadly another story. When the voice of reason, the sense of accomplishment, the moral compass comes from Jimmy Griffin, you know something is fucked up about the process. I'd like Keane and Clark to actually say what they would do in office instead of trying to out-"Swift boat" each other.

David Rivera is running for something (I'm not sure what), but his campaign thought it was a good idea to stuff my mailbox with 9 different postcards in a two day period. You would have thought there would have been some substance to the mailings and you would have been disappointed. Apparently, the printers and direct mailers will profit from the campaign. The rest of us just have to wait to see who bubbles to the top of the infighting.

It's a process that has become very bloated. You really have to dig to find of stands on things, especially in primaries where candidates are saying whatever to get past the primary hurdle. I guess hoping for a "Joel broke this, but this is how I'm going to fix it" is too much to ask for.

Mao and I were roommates in college. The bastard just drank Coors and took bong hits all the time, getting nacho cheese over everything. Fucking place stank like a mass grave. So I told him "Look Mao, you better talk to your adviser Dr.Sun Yatsen and get your shit in shape or you will be kicked to the curb, bro." The rest is history.

Ha! You are not Mao's homeslice.

I don't care if they are democrats, I care if they are endorsed by the democrat party. It is a sure sign they wont do anything other than line their own pockets. Now, I am a bleeding heart liberal as you know, but let me get a little free market on y'all.

If there was a second, viable party in the area maybe the political market would weed out fat-ass do nothings in favor of politicians that actually get shit done.

I think my middle finger's vote may be similar to yours.

Hehe James - if you want to ignore Demos in this city, this means (virtually, anyway) that you'll be ignoring most of the candidates! I keed, I keed... sort of. In local politics there is hardly any real competition between the parties, and so I think we end up with completely mediocre candidates as well. This is why I'm thinking about throwing up two middle fingers in the air and voting for Jimmy Griffin.

Eh, the Dems have 51 in the senate. Lieberman was against against most major legislation and Tim Johnson was recovering in a hospital. The GOP responded to this situation with the most filibusters in history; they blew the record out of the water and the year still has a four months left! So, national politics are messy, messy... it doesn't help when the Dem leadership is wishy-washy either.

As for local politics. I would still LOVE to know who the fuck these people are, why I should vote for them. Right now the only thing I have to go with is vote against anyone endorsed by the Democratic party or the mayor.