Mental notes from the pockets of my red coat

Itâ€™s a odd place to be sure, but while playing hall monitor at last nightâ€™s professional hockey game, I had plenty of time to mentally wander, observe and generally partake of some excellent people watching. It can be an added source of entertainment in addition to the event that actually is taking place.

Itâ€™s funny as I notice for each person at the event, some are actually there for what is taking place and there are almost as many there to be seen at the event. Some wait till the last possible second to look for their seat, thereby missing a good chunk of the first period.

Iâ€™m not going to lie, I enjoy beer, but not enough to spend most of the game running up and down the stairs to buy multiple oversized cans of the stuff. Given that seats ainâ€™t cheap, I guess Iâ€™d want to get as much value for the dollars that I gots to pay.

Itâ€™s funny watching folks come down the stairs to head to concessions or whereever. Everybody, and I mean, everybody comes down, stops in a mini-pose and then proceeds. They stop and look around and then move along. Watch next time you in the high altitude regions.

The opposite of that are the people who come down a hallway and look up into a section trying to find a friend. You think these guys would call each other. I noticed one poor guy (in a Devils jersey) scanning my group, maybe for a familiar face, but chances are if there is a friend up there, youâ€™d have his phone number, jerky!

The home team takes steps to instill a little hockey manners on the attendees. Most folks are pretty good about that. There are a few wisenheimers, who fate didnâ€™t like as there was a ten minute stretch without a whistle and that made a few folks grumble. One guy was riding me about wanting to get to his seat and before I could say anything another fan told him he â€œshould have pissed sooner.â€

It cracks me up watching folks strategies at the end of the game. In tonightâ€™s contest, it was basically there, but some folks leave their seats and start to head to the doors to â€œbeat traffic.â€ Since they stop near my space and keep watching, I canâ€™t help but wonder how much time they are saving. Folks are generally pretty good in leaving, but from the top most folks head to the escalators.

When we get cut loose, I just use the paths between the seats and get out in half the time talking, wait for it, the stairs.

Great Post..... Funny Story I went to game with someone this season and we where in the 200's so after the game we went to that bar by where they film the post game show.... Now when the game ends they advertise all these bars on that level... So we are taking our time and drinking and others are there and their isn't like "Last Call" or last drink or anything the bar tenders just start putting stuff away then turn off the lights it was insane........

Celebrating the Saint who first gave Guinness to snakes. It's like Celtic New Year's Eve out there, so as a fulltime Irishman, I'm avoiding the pubs of the posers and hightailing it to DCGB's to hoist a pint or two and listen to a Grateful Dead tribute band.

ooooh, (e:mrmike)! I would love to be there with you... I'm just beat from a week that was pretty grueling even with a few hours of spa time. Have fun!! 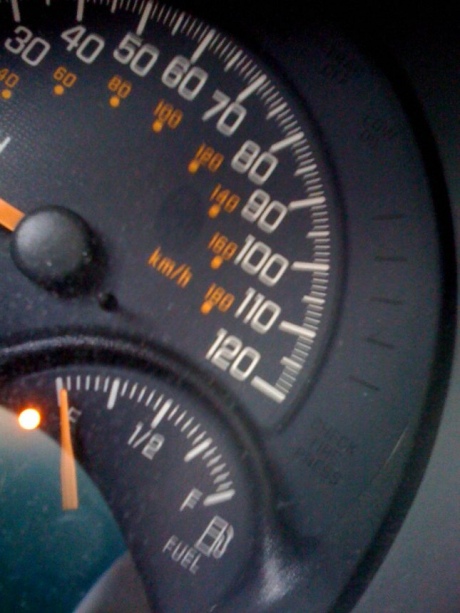 Remember that episode of Seinfeld where Kramer takes a car dealer on a thrill ride to see how far past E they can go? Inadvertedly I got to reenact that during my morning commute. I wasnâ€™t paying attention to my dashboard but after I crossed past the Delaware/Delavan intersection, I heard the tell tale sound of â€œFool, you running on fumes.â€ Okay, that might have been my Dadâ€™s voice in my head. Not being too sure where empty actually is adds a bit a thrill to the S curves that usually arenâ€™t found on the morning commute. Usually, I have a very peaceful 7 min drive to work, but this made it seem like a bit of a roller coaster. I think the concentration made my head hurt the rest of the day,

You stop wondering about prices, how speculators can cause the price to go up on gas that was already here, how it feels a little like 1974 at the pumps, where the hell is the closest station to work anyway and most importantly, HOW MANY YEARS HAVE I BEEN AT THIS LIGHT????

A colleague wanted to know why my car was in a different place and I replied that it was to optimize how fast I could get to the Gulf Station on Colvin after work, only two lights and a downhill slope to boot.

Made it with a quart to spare, but at $3.67 a gallon, a new personal best and or worse depending on how you look at it.

Been one for the books, hasn't it kids?

Had to do the good son-in-law schtick over the weekend as an uncle who had been slowly killing himself since my father-in-law passed, succumbed to liver cancer on Friday night.

I think I felt bad that I didn't feel worse. He was semi-estranged from his daughter which gave the whole proceeding a "We really don't want to, but something should be done" sort of air. I always liked him, but only recently discovered all the wrongs he was inflicting on himself.

The service took place on Tuesday at a mortuary over on Jefferson. I had to laugh a little when I was stopped at the gate. My in-laws are black and while I'm pretty soulful, I'm so not.

Mortuary home worker sees well-dressed (I can wear a suit) me strutting up the walk and says "Sir, it's a family service" and before I can say anything, a cousin bellows from the steps of the place that "he is family, jerky!"

It's a nice feeling, the circle never really closed when it really matters. The place was full to overflowing and my kids and their mom and mom's partner were all lined up on the one side of the room. I joined them and couldn't help but smirk a little imagining what a picture that must have made.

(Me, the dread headed ex, the newly bald partner (locks for Roswell, my charming daughters). Tain't nothing but a family thing.

Oh such stuff, strength comes. We looked at each other later that night, and exchanged "that's out of the way" sorts of expressions.

And then I came home to the note about (e:joshua). I hadn't seen him since we hoisted a few ales at the Blue Monk's initial Saturday opening but bantered periodically. Disagreed about everything and had a grand old time doing it. I'm heartsick for (e:jason) who was cool enough to come to the big benefit for my work in February.

All good vibes to you, Jason.

(e:joshua) and I both showed up that night around the same time, five minutes after they opened. He sat and pondered what would be his first of many brews to come at that fine establishment. I am proud to say I copied what he was having and tried my first geuze with him. I will miss his accurate and totally hilarious yelp reviews (see mighty taco) :::link::: and his spirited discussions with (e:james) about politics.

The mold was definitely broken when the Larson twins were made. My heart is heavy knowing that (e:joshua) is gone. I know many people are thinking/praying for both of you guys tonight, me included.

Perhaps, it was the cold. Perhaps it was the need to repair all the tires on my car. Perhaps it was the mild concussion suffered two days before one of my offices bigger benefits (having slipped on the ice in front of my ex's house). Perhaps it was the ticket I got in the previous journal entry. Perhaps it was the rent increase that arrived in yesterday's mail, but I'm ready for a new month. February was a kidney stone of a time frame. Even the fun of a new romance (yay, me) got a little tempered with all this crap.

A lot to process.

There, got that off my chest.

Hope March is full of the best for you!!!!

I am also thoroughly done with February.

I wasnâ€™t going to rail about this, but itâ€™s starting to look like a good idea to exercise the demons.

With an unexpected bit of afternoon off thanks to Fridayâ€™s snow storm, I set about being a good dad. I scooped up my lovely daughters to take them to get their new glasses. We meandered our way up Elmwood down Amherst St, with an eye to Delaware to better take Delaware Rd out to Sheridan. At 4 on a Friday, this seemed better than hopping on the 90.

Apparently, you cannot make a left turn from Amherst Street on to Delaware Ave from 7AM to 7PM during the week. This is news to me, and apparently the two cars that got busted doing the exact same thing right behind me. Iâ€™ve never noticed the now prominent sign alongside the road telling you this about Amherst St. Seeing as it isnâ€™t in the main thoroughfare category of Delaware, Elmwood or Main, I canâ€™t help but wonder why it has that designation.

Given all the people making turns off those streets during morning and evening rush hours, I couldnâ€™t help but wonder if Buffaloâ€™s finest werenâ€™t better spent say working the intersections by Utica. Perhaps they wore, as the demeanor of the gentle fellow who stopped me didnâ€™t scream customer friendly. My kids were in the car, so I led by example, even asking permission to open my glovebox.

Office Krupke was not amused. Seeing how I was guilty, I took the punishment like a grown up (paid the fine this morning, after whining to my mom last night).

Reading the complexities of the back of the ticket makes me think the whole exercise is at the heart of what is leaving New York State emotionally exhausted and morally bankrupt. The fine includes a $20.00 processing fee and a $60 handling fee. Iâ€™m pretty sure the machines doing that processing and handling arenâ€™t in need of such upkeep, that by screwing up and ignoring what looks like a recent sign, I actually donated to Pedro Espadaâ€˜s pension fund to a degree.

All to this all the zealous "meter-maiding", you have a money pit.