These could have been separate entries, but I figured just empty the pockets and we can resume what we doingâ€¦

So, I drag my weary self to my Monday night Bikram yoga class. Yeah, if you know me at all, that is an interesting mental picture all in itself. Near empty room and I hide toward the back with the thought being I can see and hopefully not distract the more graceful with my elephant on a high-wire schtick. Young dude comes in and set his stuff right in front of me, despite the near empty room. So, for the next ninety minutes, I got a guy who thinks the three inches of boxers then the shorts is a good look. Really? Yank the damn things up fool! Nobody has ever pulled off that look.Getting a kick out of those who are behind the â€œAnger is not policyâ€ argument against the candidacy of Carl Paladino. While he wonâ€™t get a chance to try most of what he espousing, at least he appears to be for something. â€œStatus Cuomoâ€ (come on, you wish you thought of it) is trotting out the email â€œScandalâ€ that disappeared almost as fast as it appeared last summer. Iâ€™m sorry, democratic operatives are doing the trotting, but it wonâ€™t matter.I donâ€™t condone that stuff, but to pretend he is the only guy in the capital to have something question in either his in or out basket is folly too.Think the Bills could sell Michael Vick to the fan base now?Fun hearing the Hawaii 5-0 theme on TV the other night. Given the time the original was on, I was half tempted to call my folks and ask if I could stay up to Danno â€œbook-em.â€ Like any pilot, full of exposition and former â€œLostâ€ actors who are suddenly available, but it shows some promise.Back to the Bills for a second, maybe they should follow the Sabres model and switch uniforms back again. It worked for the Sabres as people spent a day or two talking about shirts and not about players.Speaking of the Sabres, I think one of their poobahs was a little off in lamenting that a few newspaper columns drove Bass Pro away. I donâ€™t they were really considering it for the same reasons Ikea didnâ€™t want to build here. Weâ€™re not a destination point. Instead of being the nerd pestering the hot chick at the dance, the Canal side guys should (I know Iâ€™ve said it previously) look at the Chicago, Milwaukee, Cleveland, Baltimore waterfronts and see that one huge retailer isnâ€™t going to change the dynamic. Give people water access, reasons to be there (like a beach, like a navy pier type thingy, a proportional version of Chelsea Piers and the money will come.Remember when you stopped to parallel park, people would stop? Now, I see it all the time as everybody just loops around without regard for the car that is parking or the truck that might be coming the other way.

Sigh, and so it goes

The Bills:
I think they have the talent but have to learn how to use it and they could have a good team. Mix in the west coast offense the multiple backs and the the wild cat and I formation and you can take the pressure of the QB. But I still think that they could only play for the wild card with the host of other teams in our divison

Paladino:
Barrack ran on hope and Change and won so why can't Palidno run on anger. I admit I'm voting for him. I disagree with his politics but here is why.
1. Maybe he can change things in albany not like he can make things worse
2. Coumo is only in this cause of his family
3. he is doing this so he can try to be president
4. he lists all this great stuff he has done, Hello he is the Attourney General to do that stuff is his job it has nothing to do with if he will be a good governer.
5. If spitzer ran again he would have beat them both, maybe think about the fun there

Sabres:
Hope for a good team this year we shall see. Again I think they have the talent but how will they play??? Love the new white Jersy even though the one everyone is talking about is the new blue one. Just remember if the world hasn't ended by then in 10 years they have to come out with the 50 year ones. glad the slug is gone

I have a good job 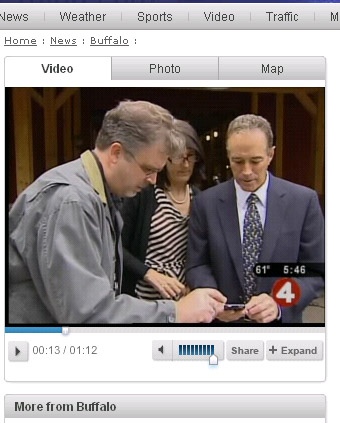 That's the county executive, the Zoo Prez in the middle and to the left, your good looking Zoo Marketing Manager

If only that was so, I was actually teaching him how to update his Zoo app. We have one for Iphone and Droids now and he was good enough to come out and help us launch it. I think the resulting press was there because of him as apps aren't exactly groundbreaking. It was cool to hear my kids get jazzed at seeing me though.

Nice, are you signing autographs there?

is only good when Graham Chapman is with him...

You want to move? No,

You want to move? No, you just want here to be better

I donâ€™t go for much reality tv, but of late there are a couple of programs on the Travel Channel that I regularly catch. The main one is â€œNo Reservationsâ€ by Anthony Bourdain. The Rust Belt episode was on recently, you know with (e:Jbeatty) getting a lot of face time at the end. Itâ€™s become one of my favorite programs. Itâ€™s not just a food show, more of a food and culture show. There really isnâ€™t anything like it, largely because of the host. Equal parts learned traveler, professional appreciator and snarkmeister, Bourdain does not play tourist, so much as seeks out the actual reality of a given location. It is definitely a job I want.

Lots of people were jazzed here about the 14 minutes he afforded Buffalo. It was nice video. I donâ€™t really care that Schwablâ€™s made the cut instead of some other Beef on Weck joint. I am getting a little old to go celebrity spotting when he was here. It was too friggen cold for that. It was nice to see Ulrichâ€™s get some face time, along with Nietzcheâ€™s in an unnamed cameo. Bourdain writes a lot of sentiments that I wish Iâ€™d written. One of those hit home last night when he was summing up Buffalo along with Detroit and Baltimore.

I've seen this episode a bunch of times before being a fan, but he hit on something that struck me.
At the end of the program, he showed a collage of folks from each spot, making themselves at home because it is home. It dawned on me that there is something to that. There is always that possibility that things COULD improve if you head out somewhere else, but that is a really big COULD. Might have made quicker hay elsewhere, but home is that for other reasons. I was reminded about that when some former classmates got together. My kids and my folks know each other and play a role in their respective lives. You canâ€™t put a price about on that.

Itâ€™s the little things like that that cause the greatest amount of consternation when the Mayor pontificates or when the State Senate breaks down like an old Nash Rambler. The outline of a good thing is there and too many folks arenâ€™t out to genuinely make it better. But you pick your places to make you stand in spite of those things. You look at what works around here and the vast majority of the success stories come in spite of the elected leadership.

I wrote about this a little in my own blog site and it got picked up by a journal writer in Baltimore who was a little miffed that Bourdain effectively gave a Berlitz style primer over the three cities as part of a large thesis. Each town is different and with its own set of problems. You could probably spend an hour in each region for a show but that probably will never be practical when you are talking about Buffalo, Baltimore and Detroit.

You take your cues from what effects your surroundings. My folks have never stopped looking for ways to improve our immediate surroundings and my former spouse and I have taken up that mantle with our lot.
Looking at Bourdainâ€™s video postcard and a few scenes from â€œthe T.O. show,â€ you could pick worse backdrops.

I figure I will stay and wait it out some more ;) It does seem to be getting better. I didn't know (e:jbeatty) was on a show. I will have to try and catch it.

I concur. Both (e:leetee) and chose to live here. But then again, I grew up in suburban Detroit and attended the University of Detroit at the McNIchols (Six Mile and Livernois) campus in the late 1970s. The eastside of Buffalo ain't got nothing on that neighborhood.

Do you remember the Pretenders' song "My City Was Gone"? These days entire neighborhoods including Poletown :::link::: A couple of years ago when Lee and I visited Detroit, I was overwhelmed by what happened to Poletown. It wasn't where I grew up, but an entire Polish neighborhood was gone. Imagine everything between the 33 and Bailey along Walden being torn down.