I can't believe someone actually hit that gong.

This seems like something (e:terry) would really enjoy doing.

Pretty cool, not exact, but awfully close. That is an older photo but it came close. I'm a little further back as this has me sharing a desk with big horned sheep.

Did this one off my phone as the pc had me at city hall, too. The Iphone program we've been trying out as my desk somewhere adjacent to the Rainforest so it's been funny seeing where I "work" according to the various programs.

This is a cool idea, Paul. Well done.

Ya, its not so accurate when using a computer. It only shows the location reported by your network IP. For example, my home connection on rime warner shows city hall. On smartphones it should be pretty exact.

When you click on the location button and it adds the map code to your blog, you can click on the map and preposition the marker.

Three things not to happen during Bikram Yoga Class

Aside from breathing, Bikram Yoga classes are quiet affairs with only the instructorâ€™s guiding voice taking you through the 90 minutes. That said, three things are not real desirable to have happen, especially all in the same evening.

3. Your stomach remembering you skipped dinner so it makes its displeasure known by screaming like an stereotypical old man â€œoyoyoyoyOYOYOYOYOYOYoyoyyoyoyâ€

If you had any flow to your work, that last one takes it away.

I was going to go with what (e:Paul) said, but I was thinking about on the epic scale, like the ones that only milk products cause that keep going and going and going as your body breaks the stuff down and that smell pretty bad, but going to the bathroom won't help cause it isn't time yet. My point is that you could use #3 as to you wanting to prevent #4 not eating most likely caused the #2, guessing some ladies or gents where trying to empress and the smell caused #1 not saying it did but it could have........................

Fortunately, that one missed me last night, the other three did not.

I would think farting also belongs on that list, lol.

â€“So, the city is paying millions to people too deceased to say thank you. We just canâ€™t get out of our own way. Nice work, H.R.

â€“All praises to IKEA for doing the City of affording Buffalo the dignity of a quick no, not 9 years of hemming and hawing. To think the Aud got torn down on a hand shake and a lame press gathering. I think what Montreal did with their old Forum, it makes you wonder. The time for the Aud was obviously 1997-98 to get cranking on something, but it does make you wonder.

â€“Anybody notice there isnâ€™t one monolithic Anchor Tenant on the waterfronts of Baltimore, Cleveland or Chicago. There are lots of little things. Didnâ€™t we learn anything from bending over backwards for Kmart on Broadway to see how fast you can wind up with a big empty building. Create some reasons to come and access to the waterfront and the shops will be lined up looking for space.

â€“An interesting to site to emerge from the Rogers Centre in Toronto and note that it was indeed Spot Coffee across the street from us.

â€“Can you imagine getting a field facing room in the Renaissance Hotel in Toronto (The Hotel part of the Rogers Centre) and not being a baseball fan? Nothing worse than wanting to pound on the wall, tell people to keep it down, and the 55,000 people on the other side pay you no heed.

â€“Back to our silly city for a moment, McCarley Gardens is one of those housing complexes that work. It was planned and executed right and UB needs that exact space for their city expansion. Iâ€™m all for UB expanding their city presence, but does it have to wreck a functioning neighborhood to accomplish that? I think not, think a little harder, folks.

â€“According to a number of sources, the Taliban have been partially funded by factions in the Pakistani government which receives considerable amounts of aid from the U.S. government. So, one of our biggest enemies in the war on terror is apparentlyâ€¦.us.

â€“I donâ€™t have a particular issue with the Sabres and the Tim Kennedy debacle, but I do have to wonder what they are doing aside from wasting the prime of Ryan Miller. You could watch Darcy Regier speak through practically clinched teeth which indicated to this observer that it wasnâ€™t his call. All this buzz killing moment did was to ensure that the Sabres have to pay Kennedy a pretty hefty severance for his taking a chance. The team didnâ€™t get any better, still has to pay him and basically told the fans not to expect any moves that matter going into this season. Hope Iâ€™m wrong, but to raise a stink over $200,000 when they have wasted millions on other guys who werenâ€™t worth it seems to scream fire sale as they wait for 40th anniversary sweater sales. Darcy, if you disagree, take a stand, dude!

â€“Not too sure why everybody is all excited for Pat Kane to lug the Stanley Cup all over, itâ€™s been here before. I got to it before he did.

â€“In praise of East Side Marioâ€™s in Toronto, the Sleemanâ€™s tap at the bar was a reassuring site.

â€“I have yet to go 3000 miles since my last oil change but when I went to my Valvoline station for a top off before my recent Canadian sojourn, the little weasel said heâ€™d do but I was two months over due as that is their policy. Stated where, exactly? Aside from some obvious Dale Carnegie needs in regards to talking to customers, he needs to think about the car a little bit as it clocks miles driven not the changing of the calendars. Schmuck.

I Guess I'll touch on the sports stuff

- Pat Kane it isn't about the Cup, it is about him being a Buffalo Boy, a kid from here, if you didn't know he played hockey you would think he was some kid ridding his bike. But maybe that is just me.

- Sabres glad they are doing the 40th sweeter thing for the reason that from what I read it will be the alterantive one and the sabres with the swords is now the regular one, but what I don't get is what about away games that wasn't mentioned in what I read......

- The paying of players for the sabres has been tough recently. You get someone good then you pay them more but they aren't worth what you pay them, argh I don't know

-Toronto is a great place, and I did know they had a Spot there but wasn't sure where or how many. In terms of Rogers Center sorry but who would stay there in a hotel and not know that there where events there that they might not like...

Who's the Old Man?

Paul McCartney first graced these shores on February 7, 1964. Not being one to miss a big thing, I arrived a day later. 46 years forward, our paths finally crossed at the Air Canada Centre in Toronto on Monday night. You donâ€™t a get a chance to see history walking around too often, especially when he has been so omnipresent in your collection as Paul has been in mine. John was always the popular answer to look cool when asked your favorite Beatle, but being a sucker for a good hook, more of my favorites were Paulâ€™s works. We all go through that transition to where your music starts to grow up a bit as early teenagers and in late 76, I got Wings Over America and the Beatles Rock and Roll Music for gifts and I was off.

Flash forward to Monday night, in the company of my oft partner in crime, my lovely son, who is getting into some eclectic musicians and whose eyes went appropriately Tex Avery-like when this seemed like a possibility. Now, the Air Canada Centre is what the HSBC Arena would like to be when it grows up. Our tickets collectively were just shy of $130 for the pair. Pretty reasonable and we were in the building. 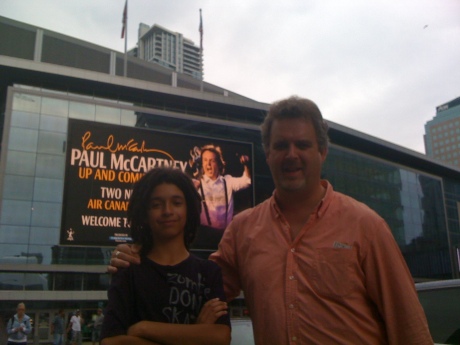 Okay, thatâ€™s in front of the building. Here, ya go: 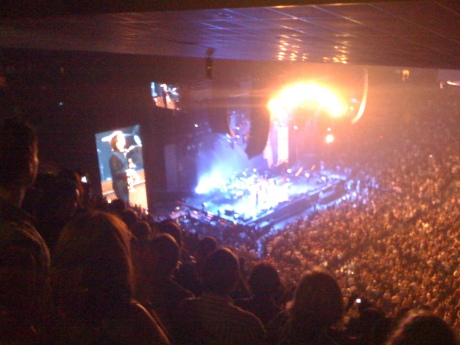 About 18,000 people, as they didnâ€™t sell the back of the arena and we might have been Paulâ€™s guests at a cook out. He is that good. A crack band, all the songs you would expect (â€œLong and Winding Road,â€ â€œLet it Beâ€, â€œHey Judeâ€), new stuff (â€œDance Tonightâ€, â€œSing the Changesâ€), stuff that flat out thrilled me (â€œVenus and Marsâ€, â€œNineteen Hundred and Eighty Fiveâ€, â€œLetâ€™em inâ€, â€œTwo of Usâ€) as well as stuff that if you werenâ€™t moved you need a check up (â€œHere, Todayâ€ and â€œMull of Kintyreâ€), it was a great night. Even familiar stuff like â€œLive and Let Dieâ€ were a wonder with great players and some pretty impressive pyrotechnics. The capper of â€œSgt. Pepperâ€ with a little of Golden Slumbers medley from Abbey Road was perfect. Itâ€™s one thing to have that great selection of songs to work through, but the band was playing them, no going through the motions. The lengthy video montage to start the show was getting on my nerves a little as it went on forever.

But by not phoning it in, I was a happy guy as was my youthful cohort, savoring his first concert.

Well, the Toronto Star got better seats, but we were in the building. Insanely great time. It falls into one of those things I really couldnâ€™t afford it, trying to live with in means and stuff, but sometimes you just have to say screw it and go for it.

The silly grins that my son and I kept exchanging were worth it.