Seems to have a sprung a leak again...

After awhile, you just got to say the hell with it and go. I stopped in Target and while I was finishing my transaction, the downpour started.

Yeah, I jumped in the puddle right by the sidewalk.

On the way to buy train tickets for my daughter's birthday, nothing like being reminded that your eldest is turning 20 to remind you of the passages of time. The big occasion is next week, but she and a friend wanted to visit a friend of theirs in Montreal. So, the former spouse and I, in keeping with our reputation of as cool parents, sported her to passage to quebec.

At some point, I'll have to find one of the pictures from that merry day. It's funny as tonight's dinner is already forgotten, but I can tell you every little detail from that day.

Hell, there is probably still a file on us at Sisters

Each time I get soaking wet, I keep telling myself - at least it is warm or at least warmish.

I love the idea of the water taxi on Buffalo's waterfront. I think going from the wharf to Dug's Dive via the taxi is a great idea. It is reasonably priced and all that, but somebody needed to rethink the press release as the noon news quoted it as saying you can take the Water Taxi from the wharf over to Templeton Landing. That isn't exactly a journey that is harsh on the footwear as that might be faster to walk (they are pretty close when traveling by land). (Psst, more beach type stuff would help too)

As a former resident of the area now covered by the NY #26, I cannot wait for this election to be over. It is a huge amount of money being spent by three campaigns and as many political action committees and all the voters in the #26 know is that each candidate is in favor of winning and against losing. It seems like every television commercial break features ads from at least two of the three candidates. While I'm all for our leaders talking to us, none of these candidates are actually saying anything.

Remember last week when it was sunny, and just right on the temp scale? That wasn't a dream right?

Other annoying advertising sticking in my craw at the moment include the radio spots for actor Al Pacino's upcoming appearance at the Seneca Casino. I'm sure he is a fascinating dude to just get talking but whoever wrote the script for the radio ad that reduced his last name to sound effect status. You hear the announcer scream "Pacino!" and I'm half tempted to duck to avoid some imaginary object richocheting off a nearby surface.

PA CINO!! hahaha - I heard that ad last week and visualized the announcer on steroids and jumping up and down in the studio as they recorded it!

It's been a busy week. Here's what is mulling around in my brainpan after our first week of spring.

There are a lot of folks in a dither about the "Buffalo: For Real" slogan. I am not one of those guys. I don't dither. We have been searching for the "big thing" forever to turn the region around and that is plenty silly, and the same goes for campaigns of any kind. Any promo campaign needs a bunch of components. This is just a step. Much like people are reluctant to scroll down a web page or click a second time, it is just a way of showing off some nice photos. It's a slogan and the world will revolve at the same pace regardless of how many car chases make what was probably the first of many youtube videos. Remember "Talkin Proud"? Well, the milk still went on your cereal the same way then too. Perceptions and realities shift at a snail's pace and to expect one tag line to do alter that is silly. so the complainers, whiners (and folks who have waaaaay too much time on their hands on the forums on media sites) should chill. It's a tag line not a miracle cure.

That said, this is pretty funny.

The Sabres are raising prices and that has some of the folks still living their moms' basements upside. It is a buck a game on average, folks, settle down. Were you going to go anyway?

I'm getting a kick out of the people and firms who represent themselves as social media consultants. Sure there are things I would like to do to my company's web pages and other things we can add to the facebook page, but in this age, when the internet has made people even lazier, if you are going to tell me what is wrong with my corporate facebook page perhaps, you should be looking at it. Doofus assessed my social media presence on the basis of an abandoned group and the 200 folks who are still there. Yeah, there is a consultant I'll bring in, chucklehead.

Has there been a more poorly run matching set of campaigns than what is happening in the New York 26th election? Everybody is so poorly representing themselves and flinging mud at each other, you have no idea what anybody actually stands for. If I could enact one election law for advertising, it would be for a mandate of "what would you do?" if you got the job.

LOL, that video is great. i seriously laughed out loud.

Bringing Back Talking Proud would be great but now it might mean something a little bit Different.... If New York State Legalizes Gay Marriage I say go back to the talking proud and show images of weddings and the Parade in states where gay marriage isn't legal and try to get gay home owners to move into Buffalo and maybe they will bring jobs with them.... Yes I am serious.....

A city can have more then one way to sell itself... Toronto has a website where it for people to get travel deals with say a ticket to a show or Baseball game and a hotel.....

I have seen a couple of those ads and ya know what fuck those two bring Chris Lee back......

"We Bid You Goodnight" 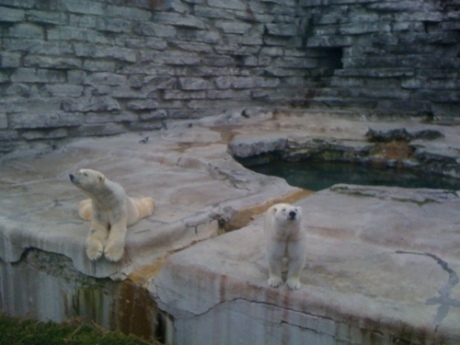 I love how relaxed the one on the left looks.

The little things I think about...

Now that the lack of winter is bringing people out a little more I've been noticing a few things in my travels:

Everybody crams into the first driveway going into Wegmans, not sure why. Watch, next time you headed to Weggies, most everybody will head for that first way in.

Nobody waits for a parallel parker to finish his or her attempt. More and more, people will pull into the other lane and into oncoming traffic instead of waiting a couple moments. Are we all in that much of a hurry? None of us are that important, me thinks.

I've been moonlighting at the Arena for some of the events down there (for the unitiated) and getting to be a part of the goings on on the Easter Sunday game was a blast until the Sabres managed to lose the darn thing. It was a kick going past a bunch of friendly tailgate parties, even getting a cheer for my red usher coat, only to have the home team blow the game and mess up my arrival time for Easter dinner at my Mom's. With my luck, my next chance at some extra income will be the Backstreet Boys show in June.

Ventured down to marina to get a taste of faux spring yesterday in the company of number one son. It was nice to see the Hatch getting ready, and some small signs of life, even better still to see the lake moving again. The Marina is one of my favorite spots and to see it when the water is still is jarring. Maybe we have FINALLY crossed beyond into something beyond winter.

I'm recultivating my passion for dives for food as well as good drinks. I met a good friend, she turned me onto Boomerrangs, and we went over to Maggies for fish frys the other night and they were awesome and good, and cheap. I like an honest meal like that. I came back feeling full and happy, we capped off at the Pink before the young bucks came in.

The lineup for the Waterfront concerts has been great so far, so I have high hopes for summer, having already bought tickets for Dark Star Orchestra, Elvis Costello and Great Big Sea. I like Tragically Hip, but I think I'll listen to them from outside the fence.

Buried another uncle in the days leading up to easter and when that type of gathering happens as often as it seemingly has, you take levity whereever you can find it. The good folks at Durham Memorial have a repaste after services, but it is a full on old school fry up. On the way into the room, an aunt remarked about the scents coming from the kitchen "bet there ain't a chicken within 4 miles of this place still moving."

And it was pretty good.

Thanks, he wasn't a close one, but the Aunt he left beyond was the one I was sad for, she's had a pretty tough cross to bear lately, buried him and her brother within the past month or so.

Sorry to hear about your uncle.