Picture of a horrible highway accident in Germany.
The picture may be kind of hard to take for some of you.
If you look closely you can see what appear to be some survivors of the
accident still in the wreckage.
Although the picture is quite graphic, it makes you realize how quickly
our loved ones can be taken from us.

Some stayed on the scene to help and even though they performed mouth to
mouth on quite a few, none apparently survived. 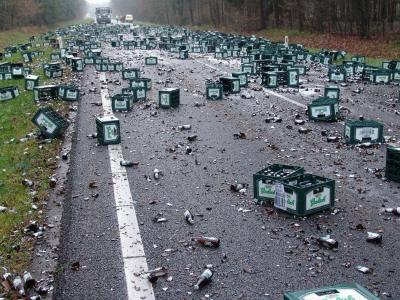 Whew, I glad wasn't my favorite girl there.

There are some cool parts of this job

I'm sort of a jerk of all trades at this gig, but there are somethings that pop out that can be pretty friggin cool. All the adelphia commericals pop up because of some shuckin and jivin I do. It's mostly paperwork, but it has can have some high profile results. One of the annoying commericals pops up during West Wing reruns on Bravo and I can say I did. Very geeky, I'll readily admit, but an ego trip nonetheless.

As a former college dj and host of one of the worst rock shows in WBFO history, it was fun to start doing voiceovers for a few ads. That too is a powertrip. A couple production guys kissing your ass. The microphone does have the little spit cover/filter on it. The slightly frazzled production chief goes from a high-pitched, high decibel near fury to talking in a near-librarial tone. In the most inside of inside voices, gently instructs you to stand a little closer to the microphone. We do a check for levels. He reels me in with a silent count and away I go.

Given how insane it can be around here lately, it's a blissful chore to do, frees you from all the other bullshit that usually captures my brain and slowly failing last nerve.

It's only 7 to 10 seconds of vocal glory at a pop but it's still fun. My Dad was watching something on Discovery the other night and called me "that was you on American Chopper, wasn't it."

Made my day. Let pop try to stick that to the refridgerator.

You know the day is wrong when your journal hiccups....

Anybody need a 40 yr old soon to be former publicist/marketer/former techie/lost dj who probably should just go tend bar?

Holy cripers! When it rains it pours. I've been slaving away in various capacities for Adelphia, most recently in the marketing department. I've endured the Rigas nonsense, decision-making on an epically bad scale and other intelligence insulting atrocities that are too numerous too mention. We just went through the dignity insulting process of having to interview with Time Warner for our jobs. Time Warner doesn't want me continuing beyond the transition. The Fuckers!!

There I vented. Corporate culture is like military intelligence, ya know.

I got three months to work with.

Worst part is that I actually liked the job.

Here's hoping....put on my cd of the U2 Buffalo Show and Until the End of the World revved my engine again. It will work out. Just had getting the professional ship righted a year ago to have this happen

Oy. That sucks. My condolences... Hopefully this will just lead to something even better though (silver lining, right?)

Damn fella - that is terrible! I can't believe that they would put you through that - it says alot about the kind of company they run. And the connotations aren't good.

Oh no! that is terrible! it's like out of Office Space. You have my sympathy.

I 2nd that...if it wasn't for bad luck...it was such a nice day yesterday so I decided to open some windows. well i forgot to close the window in my bedroom before I went to sleep. I woke up the next day at about 10:00 with out any blankets freezing my ass off. as the day progressed I felt a sore throat coming on...now my body aches and I seem to have a sinus infection. Now i haven't had so much as a sniffle since last year and today its nice out but I'm confined to stay extra warm so my body can fight the infection as fast as possible...DT

Holy cripers! When it rains it pours. I've been slaving away in various capacities for Adelphia, most recently in the marketing department. I've endured the Rigas nonsense, decision-making on an epically bad scale and other intelligence insulting atrocities that are too numerous too mention. We just went through the dignity insulting process of having to interview with Time Warner for our jobs. Time Warner doesn't want me continuing beyond the transition. The Fuckers!!

There I vented. Corporate culture is like military intelligence, ya know.

I got three months to work with.

Worst part is that I actually liked the job.

I'm a part time parent and it feels weird. My kids are reasonably well adjusted, helps that we limit their exposure to the grandparents (I'm kiddin). I've been separated for almost two years now as amicably as you could be, but occasionally things come along that kick you in the shorts.

THe ex who I get along fine with and her partner (who I get along fine with too) were having a small gathering at the house formerly known as mine a few weeks ago. It was supposed to be a small thing, but the organizer invited a handful of people over to cake and whoop it up. I'm still not sure if that included me. I knew everybody who attended. I was over at a friend's house simutaneously bemoaning the sabres game, listening him bitch about his marriage while he listened to me bitch about all the women I know are either married or gay or both (to each other). My wise middle child called me and gave me this riotous account of the goings on and alluded that I should have been there. There was no distress in her voice, it was more of a good time and you're missing it, stoopid sort of statement.

I figure if I was meant to be invited, one of the principles would have done so. I was driving home and started sobbing a little because you can't help but wonder if I lost these folks (the other partygoers) as friends because my wife and I are now single. Tne parenting angle is working, I see and participate in the kids' goings on just fine, but the amicable Elmwood circle sometimes renders people disposable.

While I'm not putting rocks in my pocket (Hang in there LMK), occasionally you wonder. I was closing the Adelphia Zone at the arena a few nights ago. I had to duck down to shut off a pc that controlled some lights and the most epic back spasm shot through me. It hurt like hell so I just stayed semifetal till it passed. As it started to subside, I couldn't help but laugh a little. 20,000 friggin people in the building and not one of them would coming lookin. Good thing I fell but could still get up.

Whoever said if it doesn't kill you, it makes you stronger seriously needs his ass kicked and I think I have just enough "character" to pull it off.

Whatever doesn't kill you makes you stronger. Unless it cuts your legs off - then it just makes you shorter. 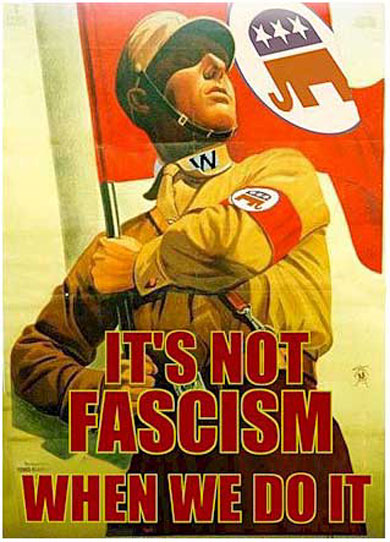 Funny. But that is How Bush Really thinks.

thanks for the chuckle

Explains a lot I think 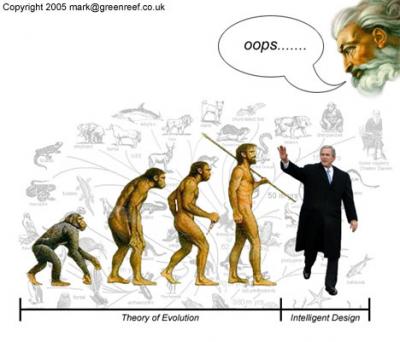 I was tending to my sick son last night at my place last night so his mom could get to a meeting. While puttering around the apartment, I noticed the dearth of breakfast stuffs, so I figure no problem, I'll get up early and head to spot.

I arrive at spot this morning at 7, time for a mike and a house blend (my personal favorite). I got half an hour before I have to get into work. They aren't real busy. Only one other guy in the pace is eating. I get my coffee and an artvoice and have a seat. 10 minutes go by, no big deal really. 20 minutes go by. All's quiet in the kitchen. The Fuck!! I stroll over to the counter and the woman behind the counter is doing many things, none of which have any thing related to food prep.

I'm thinking, I was hoping to have the Mike, but contained myself into uttering "and you haven't started it yet?"

None of them apparently involved cooking.

Not that big a deal, I couldn't wait any longer as the boss likes it when I show up on time. But when a favorite place lets you down it can color your whole day.

I'm going to be doing mental spin control all day. I can feel it.

Oh man, and the Mike is so tasty too.

Ooh stuff like that pisses me off...
I probably would have gotten pissy and muttered something like &quot;well forget it cancel my order I can't wait any longer I'll be late for work&quot; and left in a huff. (my temper comes out once in a while)... And yeah, it would make me cranky for at least the morning, if not the whole day. I hope they at least gave your money back...

Sorry, needed to get the St. Patrick's crap off the top of my journal
It's been a tough month this week if you know what I mean, and I think you do. I got this in the mail and it made me laugh (I'm immature).

Two doctors are in the hallway complaining about nurse Nancy.

''She's out of control!'' the first doctor says. ''She does everything backwards. Just last week I told her to give a man two milligrams of morphine every ten hours, she gave him 10 milligrams every two hours, he alomost died!''

''That's nothing,'' said the second doctor, "earlier this week I told her to give a man an enema every 24 hours, she tried to give him 24 enemas in one hour!''

All of a sudden they heard a blood curldling scream from down the hallway.

''OH MY GOD! I just realized that I told nurse Nancy to prick Mr. Smiths boil!'''

That joke cracked me up