That really has no ring to it at all, but it is what it is.

There are no pictures here as there are plenty elsewhere, just a couple of thoughts as I listen to my landlord do the driveway plowing.

I have a found a few things out over the past few days including: I have absolutely no patience for those taking to social media to whine about what they did or didn't get in their front yard. You didn't get four feet on your sidewalk, too flipping bad. That's a burden for a lot of folks including you. Go outside, make your snow angel in the plentiful snow we got and zip it. One person's frolic could mean serious issues for those surrounding you. You have sunshine and pavement in your neighborhood! Mazel Tov and shut up too. When it is as cold as it has been, there are folks who've had to struggle with minimal heat, icy conditions, snow totals that might be beyond their abilities to move it. So, knock it off.

As George Carlin would say, here's another group of guys who should be slapped with a bag of hammers: the goofs comparing how this blizzard doesn't stack up to other blizzards because of snow totals or whatever meaningless statistic. "Only 18 inches of snow, that's no blizzard they write, back in the day, 77, that was a blizzard." I know plenty of folks who have been or will be shoveling in this crappy wind chill would like a word with ya, Sparky. I mean, if you've lived in the Buffalo Area for a significant length of time, you've been through something like this before at some point, but each one is different, weather being funny that way. The local guys I watched pretty much got it spot on, but hearing some wags on social media attempt to joke about one storm versus another and how "this was nothing" is exasperating. Bet the plow drivers, triple a folk, and police groups doing travel ban duty don't think so. Some of these storms like 77 had body counts. This one did too. So, I don't get overrought when this type of weather gets here, but I take it seriously, despite the fact the phrase "Polar Vortex" sounds like something the Enterprise ought to be orbiting.

It seems there are few folks griping about preventative measures, like cancelling schools before the storm itself starts. "We didn't do that in my day." Well, your day might have been stupid.

We were fortunate as kids. My mom had no problem overruling the school superintendent. I was half tempted to have her call the NHL about the Sabres-Hurricanes game yesterday. You're lucky, Bettman, mom is on speed dial. 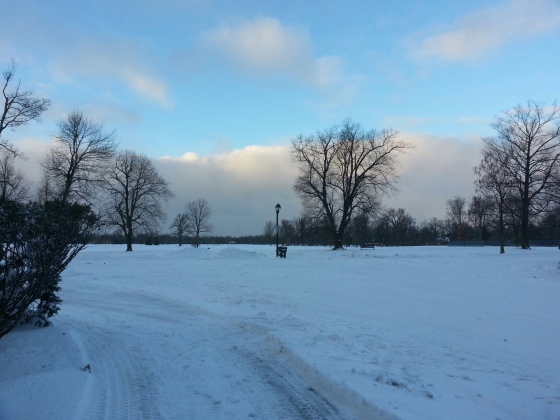 I hate when my breathe freezes into icecycles in my beard.

I took a nice jaunt to Losson Park in Cheektowaga and loved it. You could really lose yourself in nature. And I was willing. 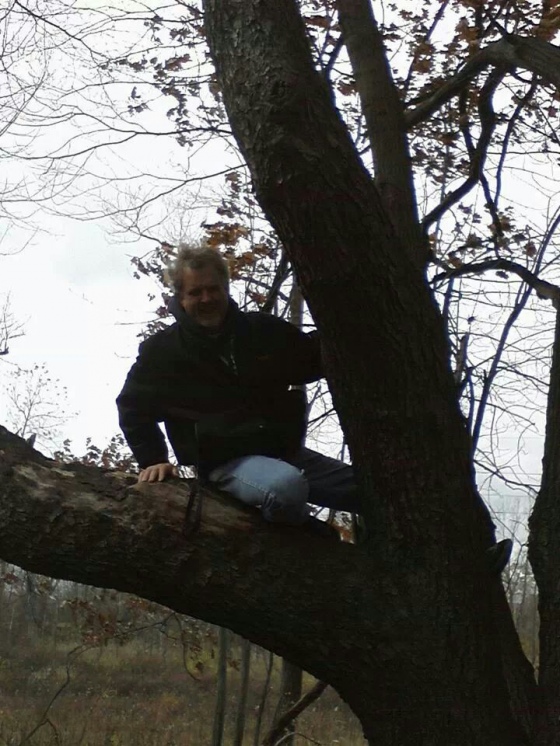 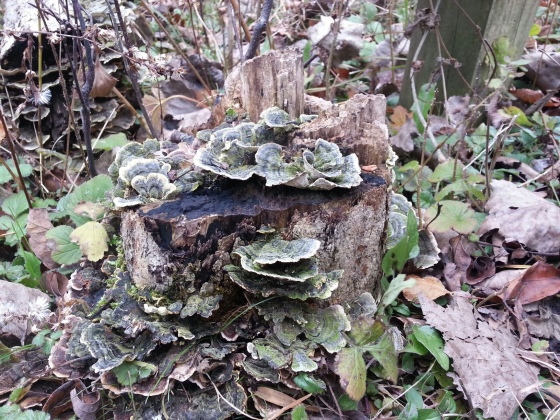 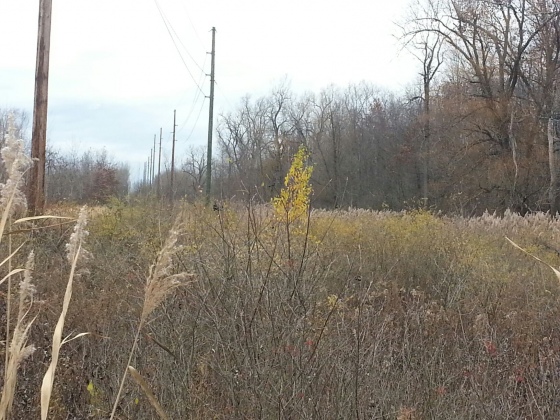 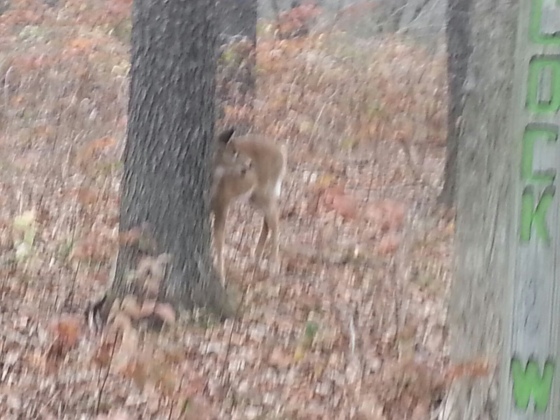 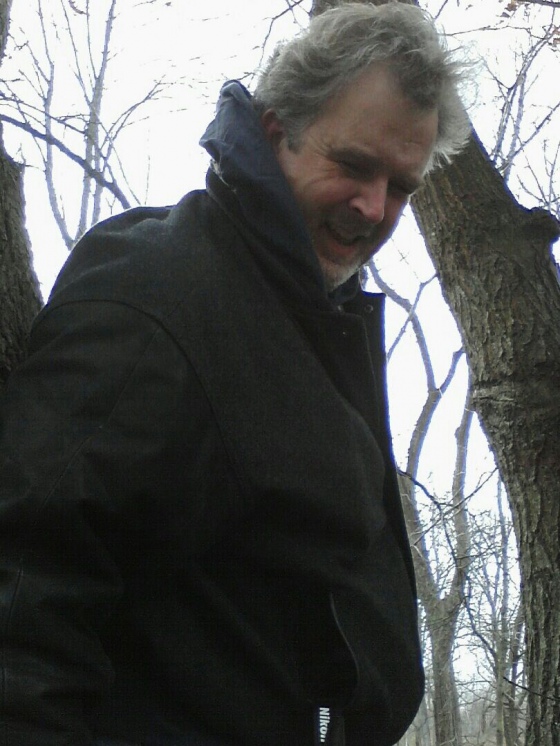 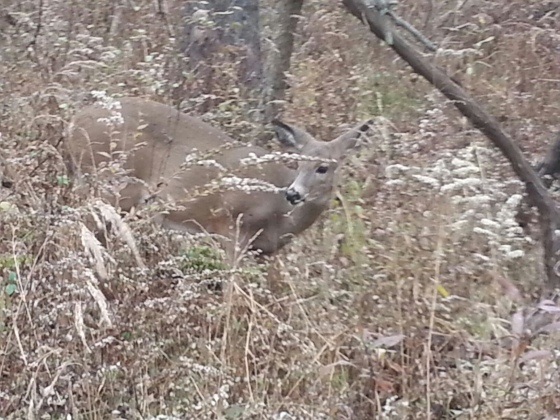 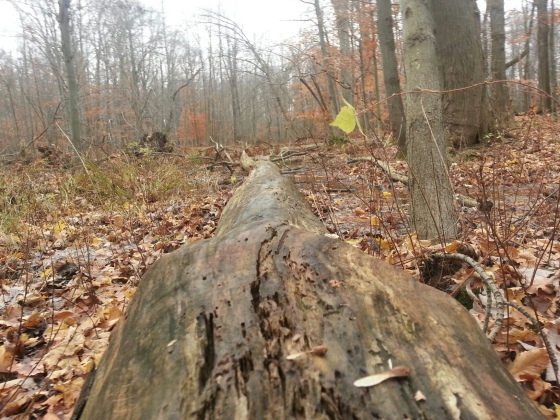 That boring CBS show, Sunday Morning, is usually on my TV most weekends. At the end, they have a segment called 'Moment of Nature," where for about a minute they just show some videographic images of wilderness somewhere in the world. They don't edit it much, so you can hear things like water falling, snowflakes falling, animals walking around, etc. And they usually show some animals walking around too. Yesterday, they featured Java, NY (near Arcade, I think) and it looked something like this. Pine trees filled with snow, and deer walking around them. Really simple and beautiful. And nice to see something on national TV that's filmed close to my hometown on the other (even more rustic) side of Arcade.

I do have one coworker who genuinely likes this weather. 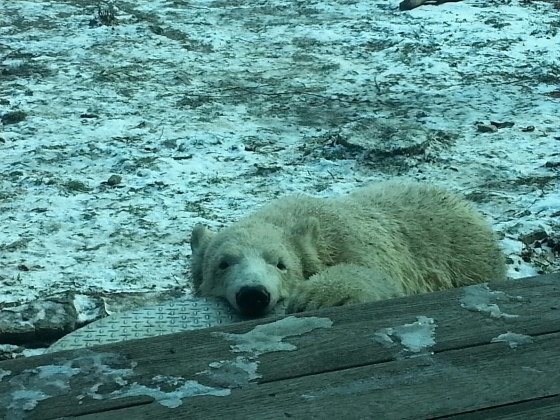 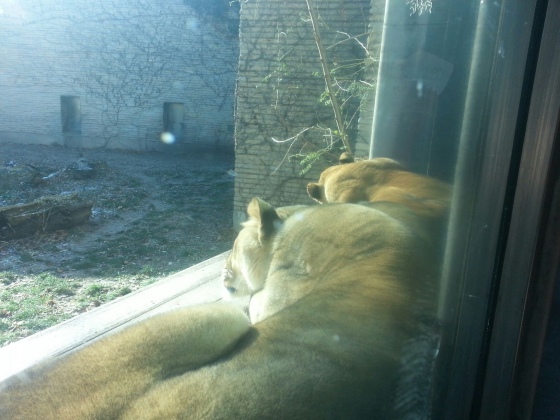 Unplugged for a nice long weekend and spent a pretty perfect Sunday meandering the falls in Watkins Glen. I took a lot of lousy pictures but got a few good ones too 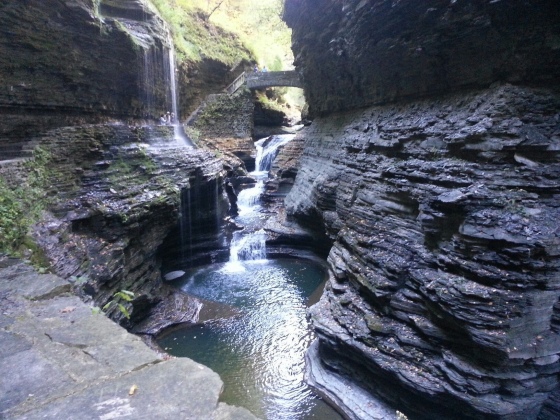 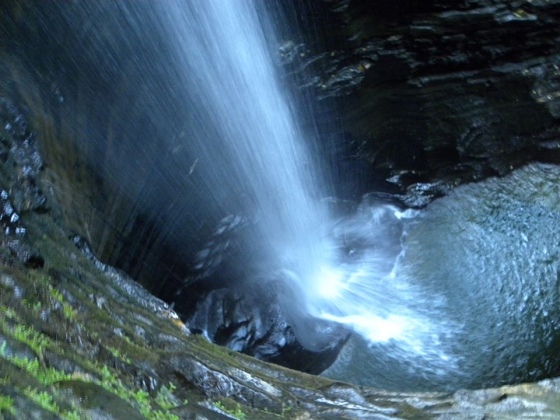 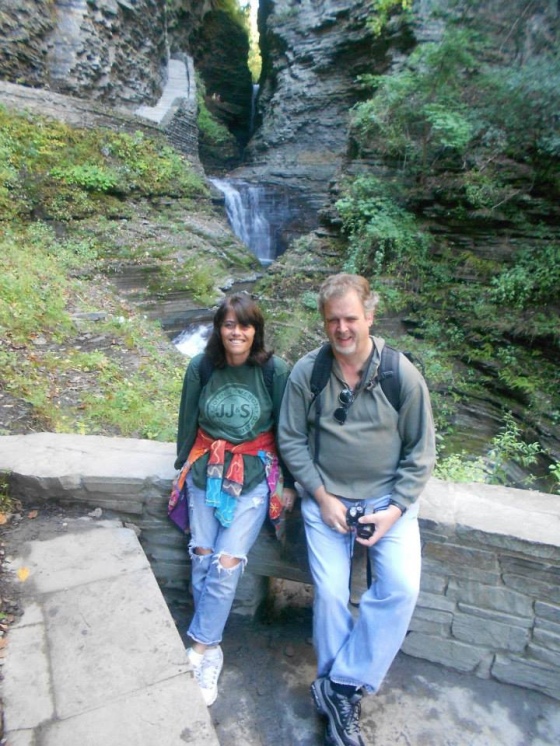 Our humble hero and his fellow waterfall fan 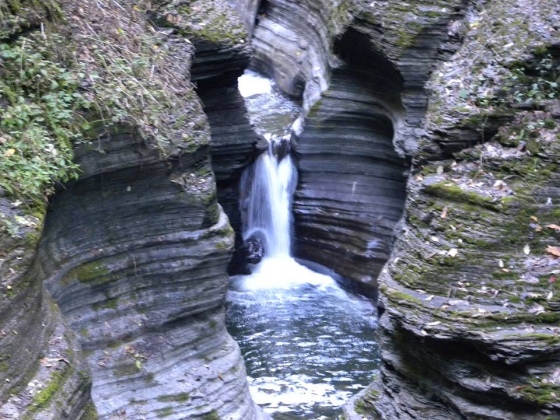 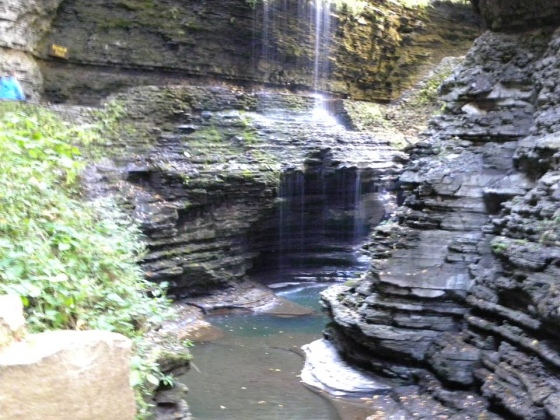 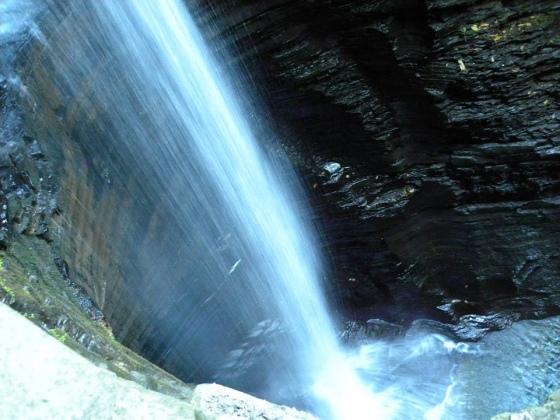 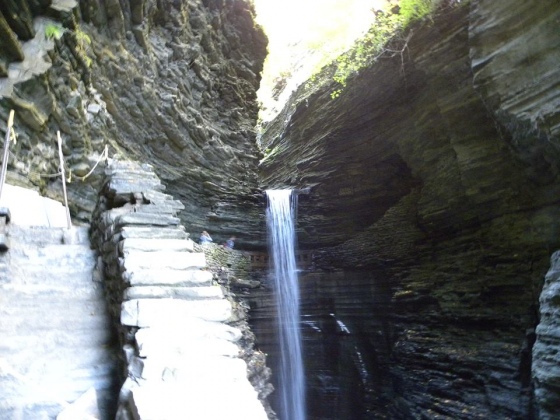 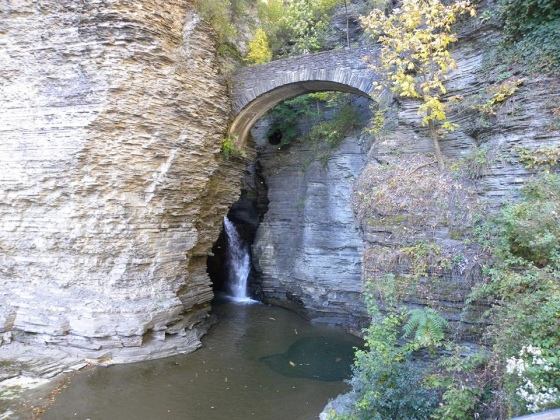 Hmm, or is that Central New York? Central Southern Tier?

Watkins Glen is amazing. I took a trip there over Columbus Day weekend. Really beautiful. Some of the wineries on Seneca Lake (well, really only two that we found: Hermann J. Wiemer and Fox Run) have come a long way in recent years and are producing some really drinkable wines these days. Plus, you can't beat the fall foliage in that part of Western New York in October.

About three hours from here, Paul, just 8 bucks for a car load, great times, climbing the stairs, and enjoying the mist.

I can't believe I have never seen this. Great pics.

These pictures make me miss home!

Twistin' by the pool 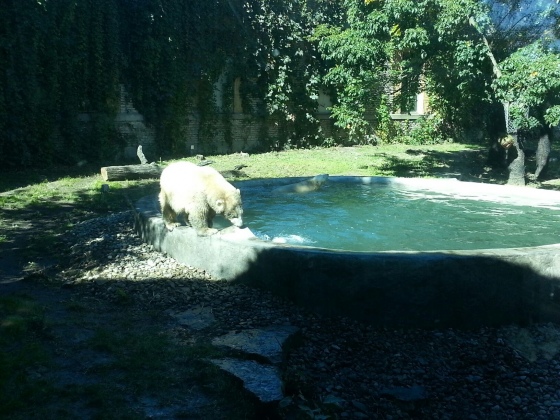 A few years ago, this area started summer with a lot of rain. Warm weather, but the better part of 10 day period, downpours were the order of the day. I, secretly being five, paid it no heed. I was at Target picking up a few things, and from the register, I could see that night's downpour cranking up. My rounds for done for the night, so no big deal. The umbrella's in the car, but I didn't care. I was done, what's a little water, it comes right out. I took my purchases and stopped to locate my car and just watch the water for a moment. Slightly to my left, I could hear a guy wound up, upset, calling the rain names, his car was on the other side of the lot, gonna effin drown, etc. None of this was the rain's fault, but I did have a little bit of sympathy for the person on the other end of the phone. To complaining boy's left was a woman watching the rain and trying to hid her amusement at the complainer.

Before I said something stupid, I did the wise thing: secured my purchases and leapt off the sidewalk into the biggest puddle I could get to and strode off to my car. He cursed, she laughed and I think did the exact same thing as he continued to weave a tapestry of obscenties that loitered in the moist air over the store entrance.

It's only water, dude, lighten up.

This came back to me the other night as we got some localized rain and one of the downpours hung over my apartment. I walked out onto my porch and just listened, let it rain, didn't watch anything in particular, just let nature do its thing. Know my mental remote control has never settled on any one channel for very long, but it was the closest I've ever come to a mediative state. I had yoga teachers maintain that such states were possible, but I think they were just overselling exhaustion. It was just a calm, warm rain, just loud enough to drown everything out. Despite being three stories over one of my city's busier streets, things disappeared. A raft of thoughts and worries stopped.

My job has me in some unusual predicaments of late, all in the name of helping out the bears and for the unitiated, I'm the one on the right 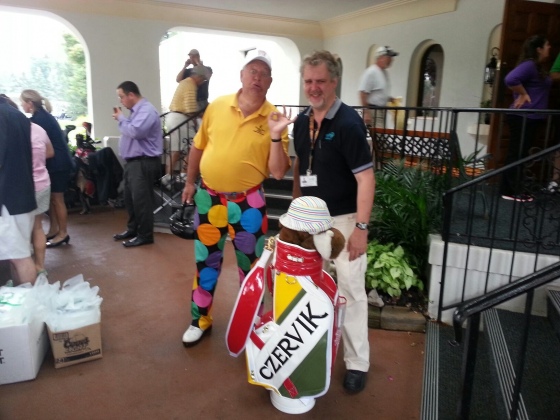 This greeted the former missus and I as we drove our younger daughter back to SUNY Purchase on Sunday. She's there for year two and really liking it. A Sophomore, damn I must be old or something. 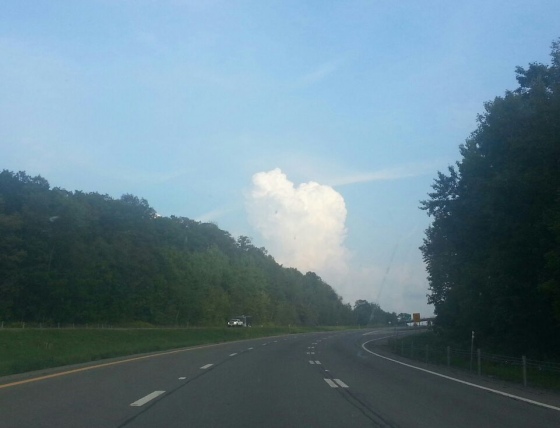 It's funny to watch when you aren't driving how people behave. The sight of a trooper makes multiple cars tap their breaks in unison which breaks me up. I mean, if the trooper was truly gunning for you, you'd be pulled over.

Anyway, we seem to have it down to a good science. We drove down on Sunday afternoon. There's an affordable hotel outside of White Plains (notice I didn't say good) that we've come to favor as it doesn't cost the proverbial arm and a leg. We got up on Monday, raided a Dunkin Donuts for coffee and egg sammys and headed over to school. Not that you get pragmatic with experience, but ninety minutes after checking in, unloading a minivan, and strangely, but perhaps, most importantly, setting up the room's wifi for my daughter and her roomies, the ex and I were dismissed.

Guess that makes it a bid of a business trip. As her older sister resumed at Buff State last week, it's up to number one son to gird his loins and head off to Tapestry for his second year of high school.

Surrounded by all these adults all the sudden.