I have new found respect for the Philadelphia Phillies. While playing at Colorado, an impressive rain storm blew in and the flying tarp made the news. The grounds crew was getting bitchslapped everywhere and all the Phillies players (the away team!) joined into help anchor the tarp and help the crew get things out of control. I thought this was insanely greatl considering they were the away team, they were winning, and the game could have stopped there. They were just folks helping other folks. It's what we need to see more of in pro sports. The home team with one exception was in the club house. Colorado fans were cool by applauding the effort. Check out the video if you haven't seen it already

Here is what ads to the coolness the philies where winning and it was an offical game they could have let the guys strugle as the field gets soaked and unplayabe and win. Secondly they waren't losing. If they where losing you could say they just did it so that the game would continue in stead of them getting a lose. I would say this goes past sportsmenship someone or maybe a couple people saw there fellowman in trouble and went to help them out. It was nice to see a crowd that shows respect based on actions and not just what team it is. I will say that I'm sorry but most fans don't have that respect. The best example I can think of is when a Visting Team (I can picture Lacrosse and hockey) wins a championship and all the fan file out. Dude your at the Stanley Cup have some respect hold you head down in sadness and cry if ya want (If you lose in a close game in can be heart wrenching). Then Compose your self and admit the other team won. I'm not saying clap but give them the respect that they earned (this assumes there wasn't any cotroversy over a goal that should have counted or something). Yes sports can be verry emotional but still have respect. That Video shows that the Home Team fans had respect for the Philies for what they did and that the Philies had respect for the grounds crew, we need more of this in Main Streem sports.

This is a great story - its a classic display of what I wish we saw more of in sports.

NICE!!! Talk about sportsmanship!!! That is certainly one of the coolest things I've seen in a while! And its awesome how they mentioned the karma thing at the end for the fly ball! HA! Yes, I too have a newfound respect for the Phillies... no fair weather fans there!!!! Thanks for sharing!!!

Well, his cup anyway. Occasionally work yields some cool things. The network "Versus" (the cable channel broadcasting the Hockey playoffs in the US for you non-fans) threw a private shindig for TW employees during the game last friday. Free food, comped ale and the following souvenir. Couldn't say no especially after the free food part. About nine people took this picture at once and they all pretty much suck, but can't beat the price of the souvenir. 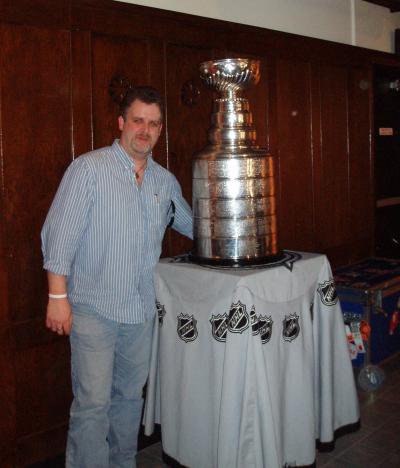 Hey what is better then free food and getting to pose with the Cup. Well one thing would be (so it would be kinda gross to) But if they would let you drink from it.