I've now been on (e:strip) for two years! It's really crazy how time flies. I've now published over 700 journals, 3274 images, received 287 comments. Not long ago I was just a young (e:stalker) in college, procrasturbating at 4 am and reading the journals of (e:strip)pers I never met.

I know I've been neglecting (e:strip) posts lately but I really would like to write more, similar to (e:mike,60184). Writing about topics other than programming at work is good for me on multiple levels. How often do I write about something non-technical? And even if I do write about programming, it could be a new topic to reinforce or learn more about.

Most of my journals are catalogs/photo dumps of my life and pretty uninteresting. One one hand I like having that virtual record. I do a lot of self-censorship - either by delaying, rethinking and rewriting what I want to write about until it's boiled to a sanitized blurb, or not published at all. I feel that unlike the heady heyday of (e:strip), what you write is more attached to you than before. But honestly, who really cares? This isn't facebook or google who's tracking every word you say to sell your soul to some marketer later. The old posts of (e:strip) were much more interesting - sometimes, I click on the random article link just to read them

From now on, I would like to write at least one post a day. Even if I have nothing interesting to write about than some youtube video I saw, or some programming concept that just clicked.

I'd also like to work on updating and developing the site a little - (e:paul,60191) just added poop emojis, and there's a lot more that could be modernized (even if it's just on the back end). I'll save that for winter though ;)

What stops you from posting?

hahha, I have to live up to the reputation of the human-comment-bubble. I actually was a comment bubble in one of the halloween extravaganzas at the 24.

I really want to add new features and modernize the mobile app with Paul. Maybe even advertise more. I just don't know when there will be more time- maybe winter?

(e:tinypliny) you manage to write more than I post with your comments. I always appreciate the email storm I get when you log on.

The third picture is the burrito?
What is inside it?

I forget to come here everyday need to get back into the habit of it .... Part of that is that when I'm on twitter it Feels as if one is having a conversation, then I get behind on reading posts ... I still haven't posted about iphone , Hoping to try a mobile post today if I can click on the mobile part it isn't easy but do have a sort of copy paste one coming up hence why I'm here today .....

Bunch of reasons.
I am so exhausted in my mind and spirit that I think I have very little to say nowadays.

I thought my life was somewhat boring in Buffalo, but here it is at a standstill. Now I just take a million pictures and since all of them are automatically uploaded to G+ its super easy to hit a button, write a sentence and send it along to my family or to a small circle of friends.

I write a LOT, all of it pretty technical. On an average I start 2 Google Docs a day. On top of it I just started a github blog for notes. All this writing highlights my dreary existence even more.

I love coming and here and hearing all about the best friends whom I left behind and I always wish I had met you before I left. :-)

My phone's apps all decided that they wouldn't cooperate with estrip and/or estrip itself kept crashing (see my April post). I think the latest update that happened about two weeks ago might have fixed it but now I've gotten out of the habit. I really enjoy your and everyone's posts, and want to contribute more.

Yesterday I was listening to Blümchen (die beste Künstler) with (e:paul) and was reading this post that (e:terry,35355) wrote about loving her back in 2003.

I read a couple of his other posts and they were redonk. And the other day when (e:Mike) was over we were reading some of (e:paul)'s posts from a less bougie time (e:paul,32125).

It made me think it's pretty awesome that a journal like estrip lets you go back and see what you or someone else was like at different points in their life. Even boring shiz about food or being bored at some bar somehow ends up being fun to read. It's like a record of Buffalo - I know I always came across estrip posts on google before I even knew anyone on it. Emily's brother would see what Paul said about a restaurant before he went there. There's so much written on estrip about Buffalo that otherwise would fall to the wayside.

I think the Chalk thing is a great idea..... I don't run the site and don't know what Paul's goals are for the site but I wonder if people would notice if it was written on the Road and or side walks where Elmwood Festival of the Arts is ??

I don't post as much cause I get behind and also some things I would post about aren't really an entire blog and some of that I blame on how much fun posting about sports and shows it quick little tweets is .....

I stopped posting because I moved. I bet that is the primary reason for a substantial number of non-current posters. I still keep in touch once in a while but it is increasingly becoming less frequent as life becomes busier and more chaotic.

On Sunday, (e:paul) and I took a break from our computing and (e:terry) his anime to go out for a walk on a really nice day. We ended up stopping at Hu's for some chalk so we could advertise estrip on the busiest corners.

I think it'd be awesome if more people joined and this place was bumping.

We stopped at the coop for some groceries. I forgot to take pictures, but they were selling organic cucumbers for $3.29 each! That seems insane! I thought of you (e:tinypliny).

We also grabbed some soup from Globe before heading home. The pumpkin curry with coconut flakes was amazing, I love their soup. they also had these desserts that looked amazing - can't remember what they're called.

At home Terry put on the movie Christopher and his Kind, about a gay writer Christopher Isherwood living in Berlin in the 1930's. Paul looked into his life more and apparently he was super famous - he collaborated with Truman Capote. 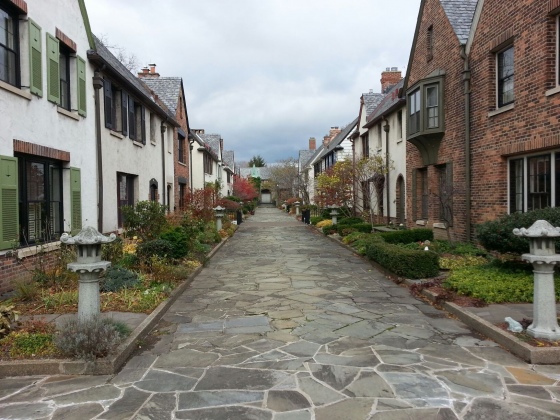 I had never been up these apartment stairs on North Street before. It was like a little street with a drawbridge at the end. 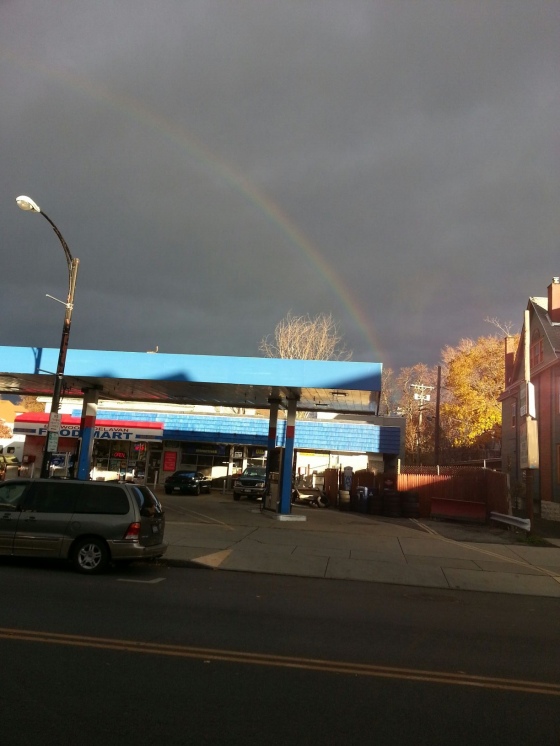 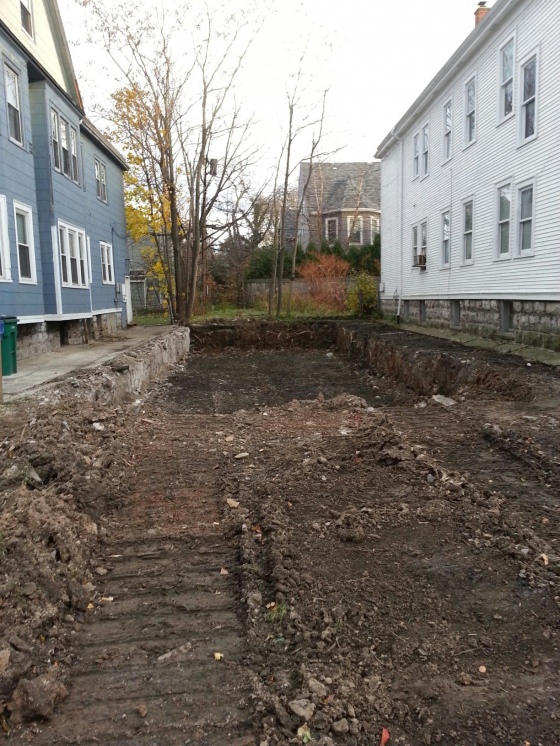 They knocked down a house on Elmwood recently, north of Bidwell - was this on fire? I can't remember. 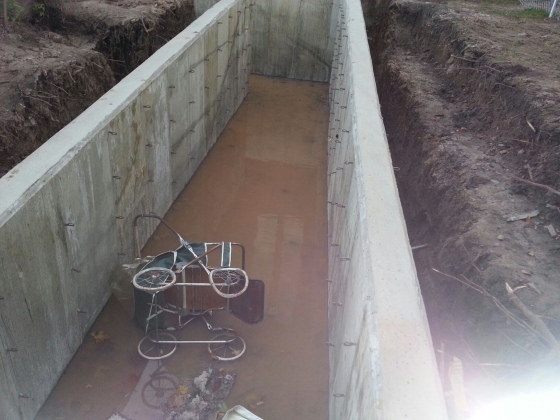 Presbyterian Church construction - concrete formwork that looks like a moat. Someone lost their baby in it 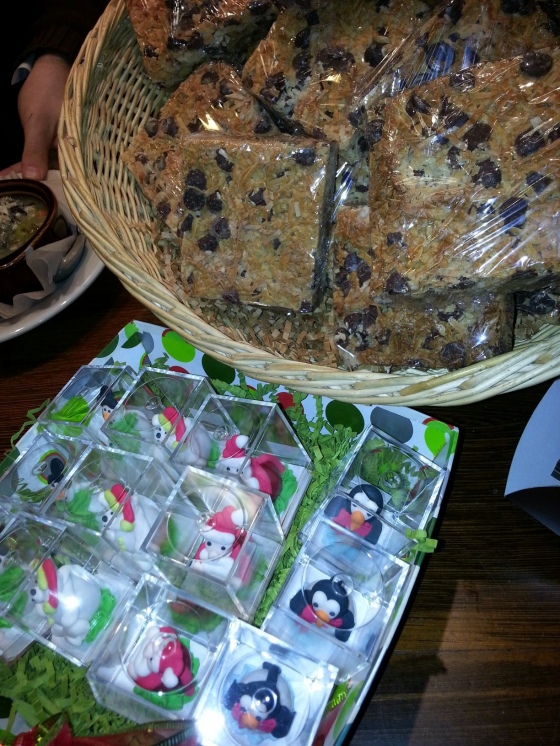 Oh man. It would have been so cool had the rainbow been over the mayfair lane pic! missed chances!

I see.. perambulators in ditches.

The timestamps are awry for me. (e:Paul) - are you seeing what I am seeing??

hahah @ coop cucumbers. Looks like I managed to enter your grocery subconsciousness. As a former grocery maniac on the site: :::link::: this is somewhat amusing. :)

Wow @ the Mayfair lane pic. I never went up there in all the 5 years I was in Buffalo. There used to be this ominous no-trespassing sign there and I always felt it was directed squarely at me.

That fist picture is Mayfair Lane. It was designed by celebrated architect, E.B. Green, who actually lived there for a time. At the time it was built, the condominium plan with lower level parking was a new idea, so the place has a historic factor that's kind of cool, imo.