Out of boredom I decided to pull the Arduino out of its box and start playing with it again. It's much easier to get up and running sitting up on a desk instead of on the ground, next to the fireplace. Plus Fedora even has the Arduino IDE in its repository now.
What should I make? 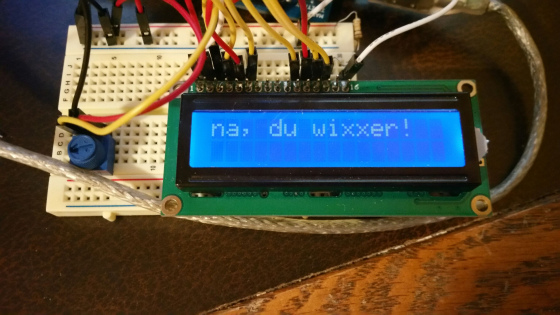 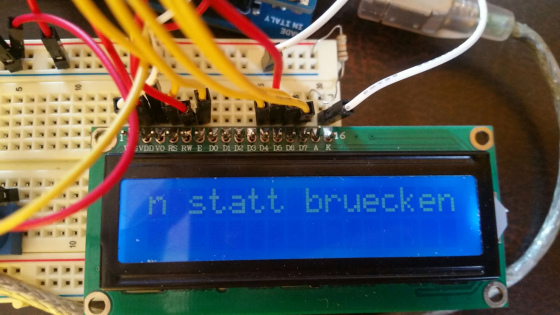 The past week or so when I have the time, I've been going through the source of (e:strip) and cleaning it up.

So far I've:
I still want to pull out all of the inline styles and refactor the CSS into something useable, maybe with flexbox.

I also want to try out multimedia websockets for the Talkbox. And maybe add

Schema.org descriptions for users and posts, so we can get structured data to crawlers.

Not that anyone is really posting - but there's something satisfying about cleaning up retro code. It's almost Zen, seeing how much code you can condense into the simplest few lines.

I ran into this video on reddit of the sounds of different sorting algorithms make as they process random data. It's pretty mesmerizing to watch.


Some actually sound pretty cool. My favorite one is the bogo sort, even though it's basically impossible to actually sort data with it (bogo sort is randomly shuffling data and hoping it's suddenly sorted).

It's cool to see the processed visualized like this. Something makes me think I would have like data structures much better in school if we got to do things like this, considering no one ever needs to implement any sorting themselves.

This video is a much better comparison of different sorts. You can't hear the sounds they make, but you can see the differences in memory usage vs compute time (faster sorts take less time, while the more memory efficient algorithms have less colored elements selected at a time) They start with different arrangements of starting data.

On a different note, I found out today you can get a real computer science masters online for only $7,000 from Georgia Institute of Technology

. After PEF reimbursements it would be almost $0 for me. You can also take the same classes for no credit for free. I am never giving a school money, but if you need a piece of paper kind of cool. Most subjects could be self taught and practiced/reviweed with Reddit and StackExchange, but having all a subject's info in one place and getting standard feedback on your projects is also useful.

A brogrammer is born 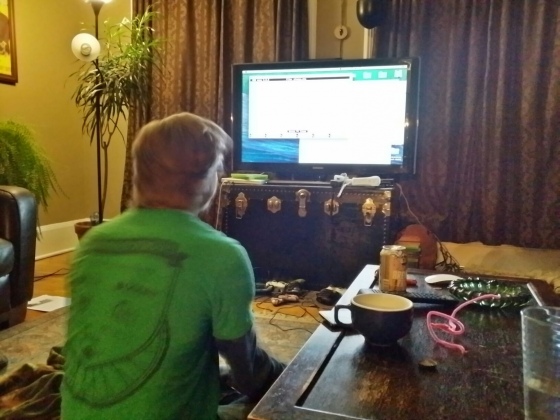 He had an issue converting files for import into Quickbooks - he had a qif file, from the personal version of quickbooks, and needed it to become an IIF file, for the accountant one. professor (e:paul) and I walked Terry through translating his logic into programming. There were a lot of small catches but after a few hours, (e:terry) had it down pretty good.

I think he could be an awesome programmer and I want him to learn more - I feel like it'd speed up a lot of his work and we could all work together.

I found a really good resource for learning new languages, and getting a quick rundown on syntax, operands, logic etc with an example of each. I used it yesterday when I needed to write a Perl script for AutoCAD, but I found it really useful for getting a better hand on javascript.

The weirdest language I've ever seen is on there. It's called brainfuck

. Everything in brainfuck with only 8 commands is done by manipulating a pointer over a 30,000 cell array. The compiler for it can be only 200 bytes. Why does it exist? Keine Ahnung.

This, for example, will print out the letter A:

How awesome would it be if your blog had just interpreted that as an A.

Friday night (e:paul) and I finished a quick PHP script for Meredith and one of her clients. Basically she wanted to call a script that took a specific SQL query and have the results placed in a CSV file, with a log of successes and failures.

Writing the initial version of the script was straight forward logic-wise, although I did have some trouble connecting to a Azure MSSQL server. After the database was changed to a MySQL database, it worked perfectly.

Then I sat down with Paul and we worked on making it object oriented, fully commented and documented, completely abstracted and reusable. It was really satisfying to take something simple like that and flesh it out fully. The auto-PHPdocs are really cool. I've gotten paid for programming jobs before but that was probably the cleanest job I've worked on.

I really want to work on more freelance type scripting jobs now that I have a better idea of how to setup a good workflow.

Tonight I was on a roll, so after I worked out I headed over to Spot to program. I've been looking at (e:Paul)'s cycles project and its helped me a lot in working on (e:terry)'s form making project, especially in terms of setting up things the right way with MVC and how I want to handle user input. When he was writing it I didn't always understand the code, but now I can sit down and step through it line by line it's a lot clearer.

Anyway I actually got coffee at spot. Lately I've liked the taste of coffee. I used to hate all bitter things like dry wines, hoppy beers and dark chocolate but for some reason in the past year or two it has been different. I guess I've either adjusted to them as I've had it more or my tastes have changed? Definitely had more of all these things with Paul and Terry. The sweet tooth has not gone away though.

Agave is now open where Blue Fin was. I really want to try it especially since its supposed to have a different menu than Don Tequila. 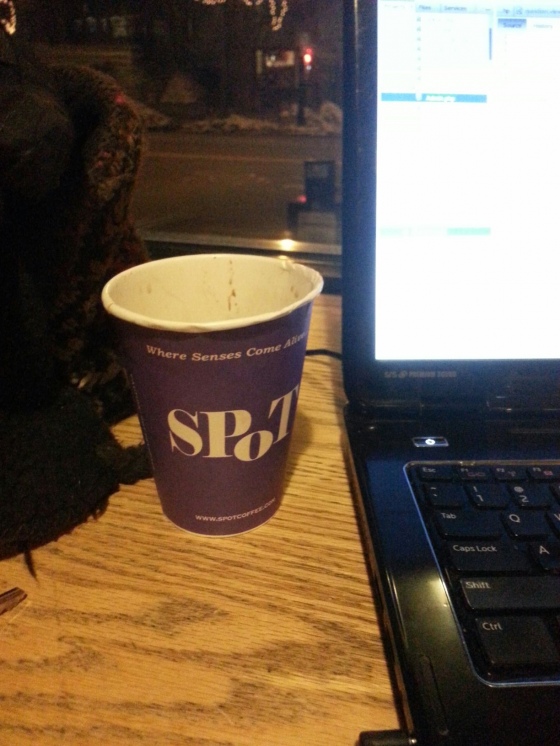 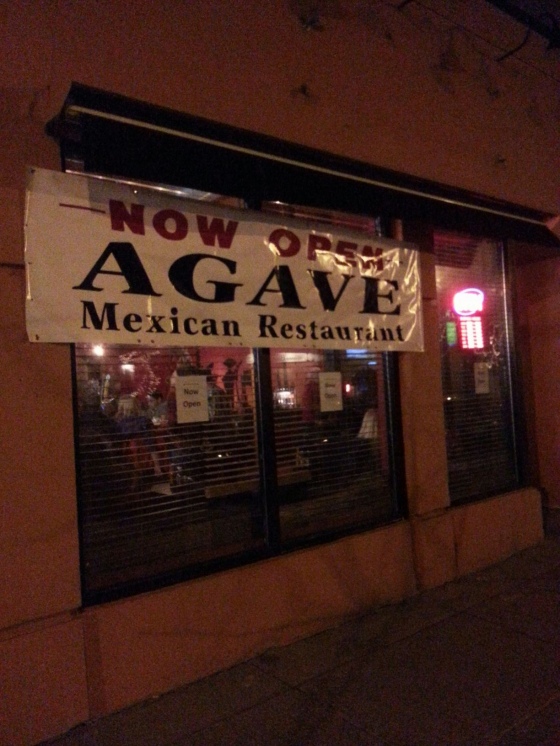 That is true. I definitely have less of an urge to down a bag of candy hearts than I did before though. Or maybe I am just have more willpower?

I wouldn't expect your sweet tooth to ever be replaced by your new appreciation for bitter tastes. If anything, one might enhance the other. There's nothing better than bitter coffee and something sweet to go with. Also dry red wine and chocolate are pretty amazing together too!

A while back I wanted a smartphone, and Microsoft was handing out Windows Phones to anyone developed an app for them. So I banged out an app called Soil Sort that classifies soils based on sieve test particle size. It tells you some general properties of the soil like strength, cohesion blah blah. My roommate Sarah always called me a dirt nerd because of it.

Anyway, it had been downloaded 448 times, but I never got any feedback. The other day I got an email from some Nigerian engineer thanking me for writing it.

It's an awesome feeling to hear that someone actually used something I made. It motivates me to want to program more. I'm still learning tons about web development and PHP from (e:paul), so hopefully I can produce useful tools soon.

After work I headed over to Synacor for the PHP meetup. The Synacor developer who runs the meetup, Shawn, is pretty awesome. They have a sweet office down near the marina. We over PSRs and composer, both of which I was aware of, but didn't really know how they functioned or how to use them. I know I could always learn about anything PHP from (e:paul) but it's good that I don't always have to bother him, lol. One thing Shawn mentioned he found was good practice, especially for javascript, was trying to create a snake game as quickly as you can. I think that might be a good exercise if I ever finish this thermostat.


I started watching Teen Wolf today. Really behind considering it is now in it's third season, but I have to catch up to watch with (e:paul) and (e:terry).
It's amazing, it makes me want to be a werewolf minus people hunting me. Not to mention all the guys in it are ridic attractive. The best part is I've found all the episodes either dubbed auf Deutsch or in English with German subtitles, so hopefully it'll be a good way to practice.
(e:xandra) thinks it sucks but I say she just isn't in the target teen girl/gay man demographic.

The other day, (e:paul) and I spent an hour trying to get the WS2801 LEDs working with the Arduino. They kept glowing on one LED, either full brightness or red and green. We thought it might have been library we used or the LEDs being defective, but it turns out there is an input and output side of the strand and we had it reversed. I seriously can't believe we missed that. Now they're working, fully addressable and ridiculously bright. For future reference - make sure you're always inputting into the right hole.

Side note these LEDs outgas so bad they make me sick. 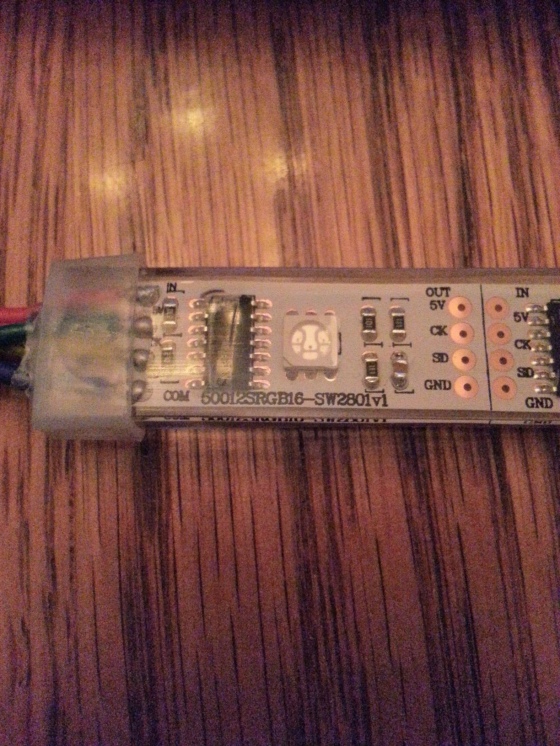 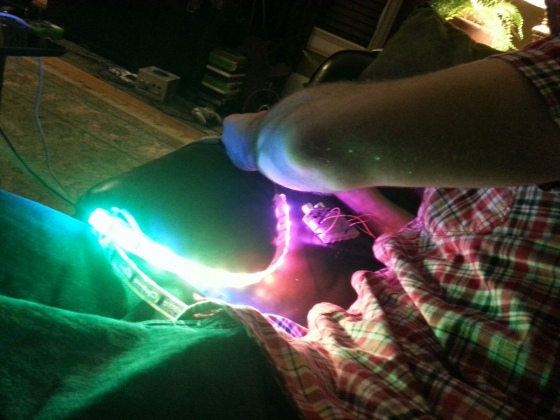 LEDs haunted by the christmas spirit. Or rather by the venal nature of it all.

I always have a hard time when it comes to inputting in the right hole lol.