I like Gratwick Basic Science Building, the building (e:paul) and I work in. Despite the asbestos and radiators that constantly overheat me, I think the old school lab feel is practical and comfortable.

Since it's 7 floors tall you have a pretty good view of downtown and even the lake. The parking wasteland is ugly but you can get a nice view of the sun when it goes down. 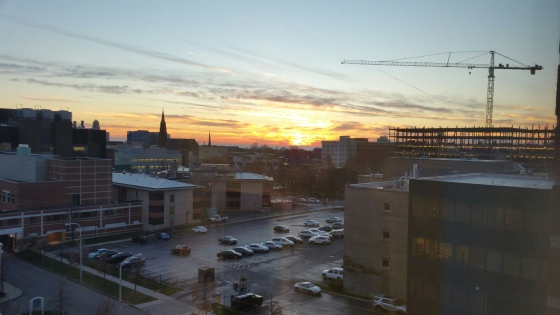 From Paul's desk you can the most ridiculous traffic I've seen in Buffalo. Every day, a 15 minute long line queues up outside the valet for people waiting to valet park. It completely closes off the street, everyone honks, it's crazy. I definitely see why they have the service - if you're sick or disabled, it's probably very helpful. But that can't be everyone in this line - you definitely could park in the visitor lot and walk over by the time you got through.

If you don't like parking 5 blocks away into the Fruit Belt, the residents don't either, and you don't want to pay the (already subsidized) lot fees - maybe you should find another way to get to work. 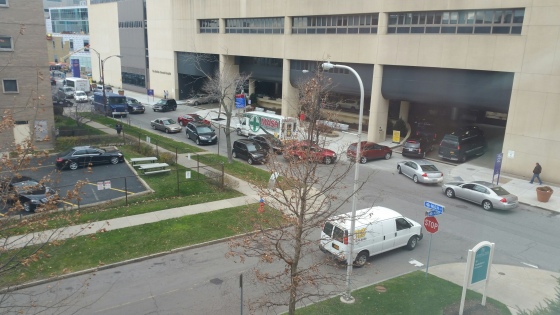 My own personal hell

We went Christmas shopping with (e:mike) at the Galleria. I think it approaches what I'd consider hell. 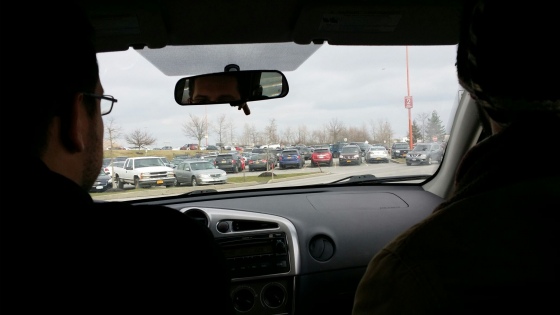 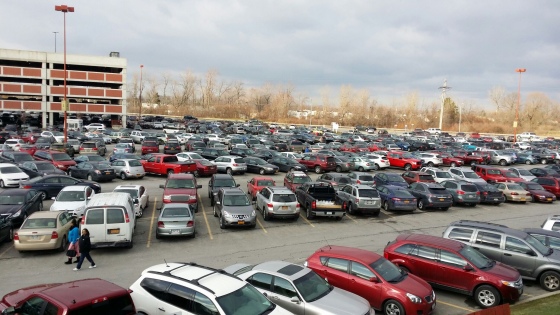 (e:terry) and I got to go see the animals at the pet store while Mike and Paul went to the craft store. If anyone was struggling to find a calender of guinea pigs playing sports, they sell one. 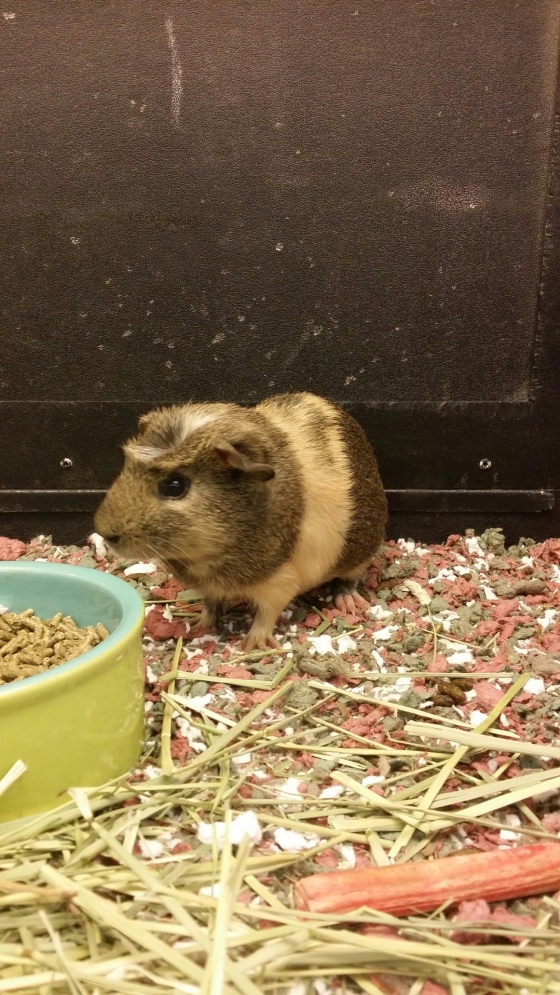 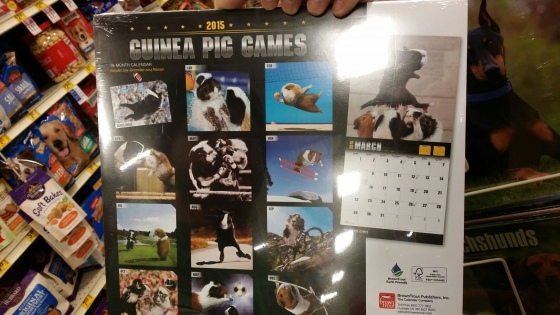 You think that we would of all people (e:tinypliny).

I should try to get it done online earlier next year.

I like Christmas shopping with (e:mike). I'm not sure why you guys even went. (E:terry) got himself a jacket. At least you got his shopping done.

Doesn't everyone shop online these days?

We finally got the car's recalled parts replaced at Paddock on Friday. I went with (e:paul) to pick it up in their asphalt ocean in Kenmore.

When we went told them we were there to pick up the keys for our car. The desk clerk told us it was going to be $70 - wait what? It's a recall. When we called her out on it, she said "Oh, it must be our new computer system. Let me go check on this". What a scam.

We ended up paying $50 for a second key. Turns out we could have gotten one online for less than $10, and gotten it programmed and cut for another $10.

Another reason not to trust anyone involved with cars. 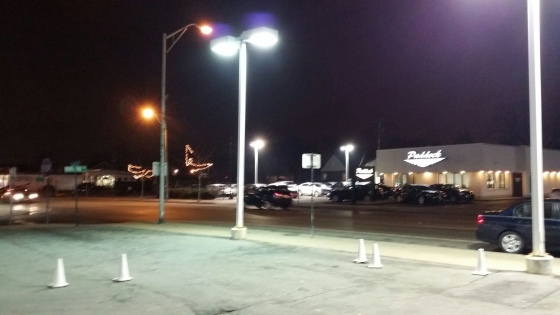 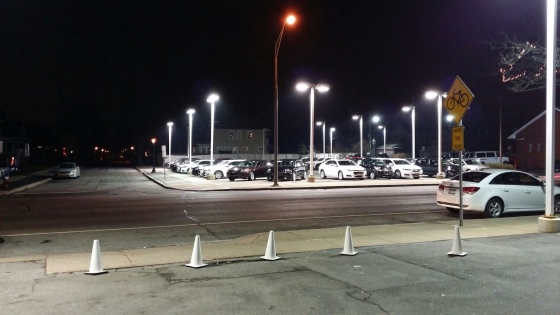 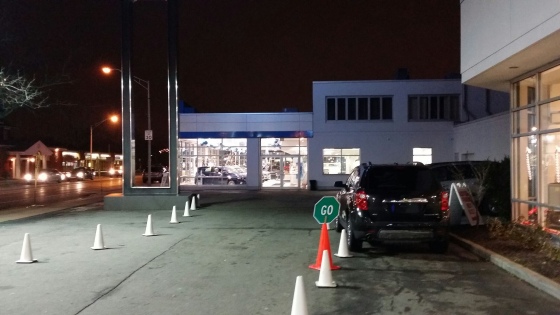 We rented a giant Ford SUV to go camping, and carry all our friends and our things down to Brushwood. While I'm sure it was more efficent than taking multiple cars, it was my worst nightmare to be in it. 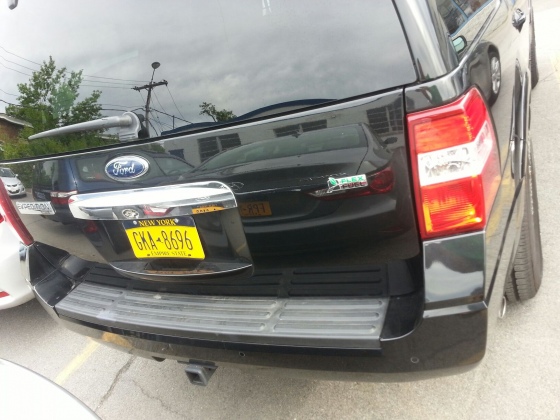 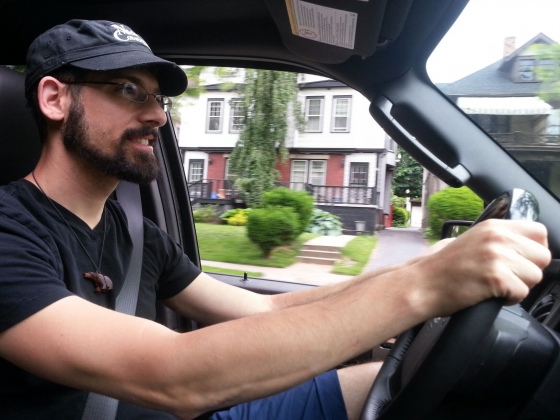 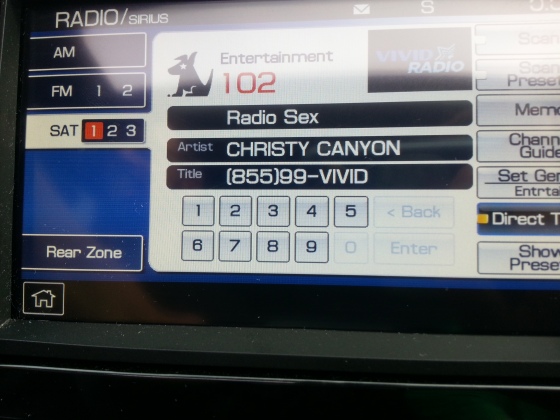 I think that might be my upstairs neighbour broadcasting.

I fucking hate having a car. I know that sounds like a garbage first world problem, but I do.

I just worked it out today that if I didn't have this lease and was able to be in the car share, I would have only spent $200 (counting the days I actually needed to drive for work) this year instead of $600, even more with the other months I took over the lease. And this is in the winter with the few times I actually had to drive. I could have probably taken transit on almost every day I drove anyway.

I barely ever drive it and still pay for it on the off chance I need it. When I get rid of this car I am going to take the money I save and do something fun with it, besides paying the Sallie Mae the bloodsucker (what could be better?).

Too bad I can't car share yet, I've had a license for less than the two years you need. Has anyone had experience with Buffalo Car Share?

I knew how to drive very well. But then I drove on the opposite side and I learned I couldn't undo all the years of experience. So I just gave up driving and haven't had a car since forever. Can't say I miss it. I pick work and commutes that are intentionally car free. I engineered my lifestyle so I wouldn't ever need a car.

You need more practice too. Maybe you should practice while you still have a car before you become another (e:hodown) who doesn't know how to drive.

No experience with Buffalo care share, but I have experience with Zipcar in Baltimore. It's freaking awesome, and I would recommend it to anyone. Baltimore suffers from a car culture mentality very much like Buffalo does, and I will never understand that. It is totally possible for most (OK, maybe not all people) to commute to work on public transportation and use a car share program on those occasions when you go shopping at IKEA or need to pick someone up at the airport. At least that has been my experience.

Yesterday I left work early to head up to the Park-In on Parkside, a protest to support changing the traffic configuration of Parkside Avenue. The goal is to reduce the four lanes of traffic to two, either with two parking lanes or a center turn and bike lanes. A "road diet" on a congested street like Parkside typically makes traffic flow smoother with less accidents, since you don't have cars constantly merging and changing lanes from other cars parking and turning. (Road Diet wiki) Same volume, less area.

There were probably about 30 people, a good mix of drivers, pedestrians and cyclists at Sweetness 7. The drivers all parked their cars in the outer lanes to make the street two lanes, and we all held signs protesting to passing cars. Surprisingly we didn't get too many angry drivers and seemed to get more honks to support us rather than people flipping us the bird.

Eventually the po-po showed up with 4 cars plus the police chief. They weren't aggressive or anything but isn't that an overreaction? I'm sure 3 of those cars would have been much more useful on patrol. And why did the chief need to come? Anyway, they threatened to give tickets to anyone who didn't move their cars. A few people refused to and took the tickets.

I hope that something comes out of it. There was a decent amount of press coverage from Channel 4 and 2, and the petition got over 300 signatures not counting the internet ones. If you want to sign it, you can online here. 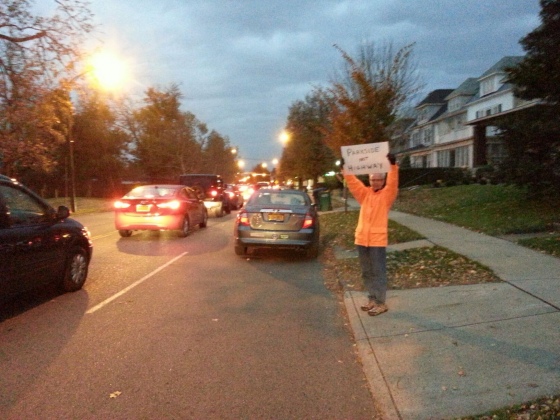 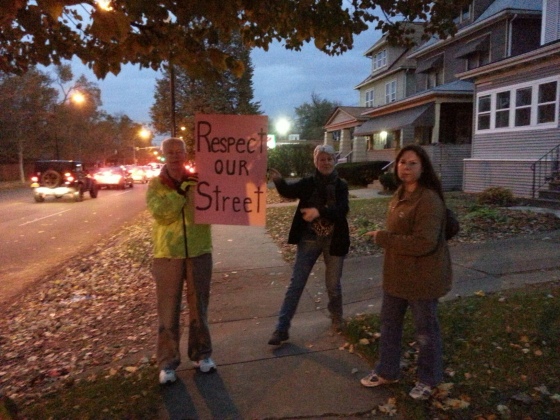 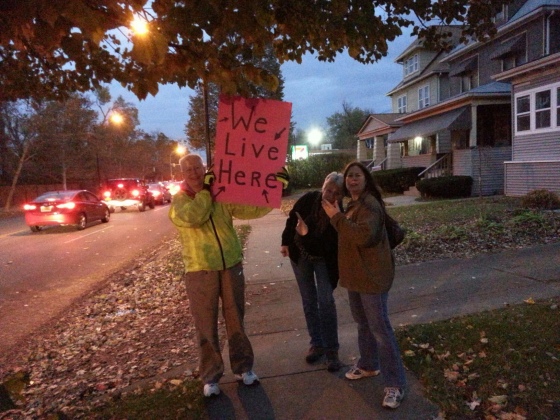 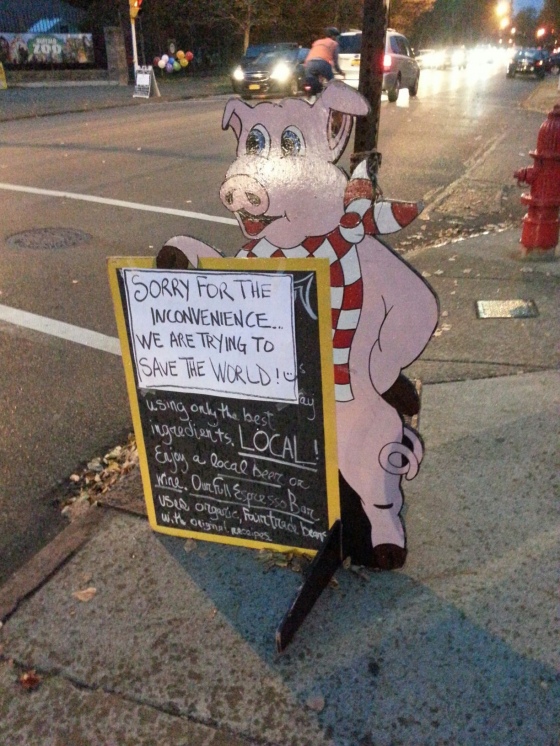 A little dramatic, but why not! 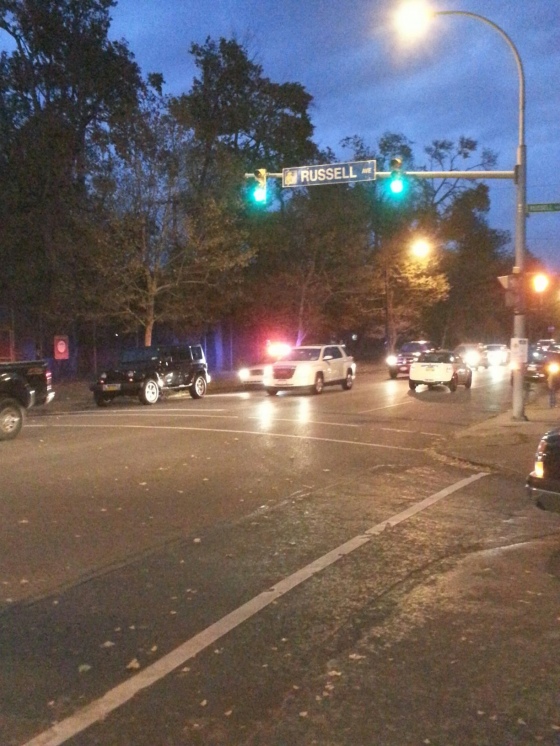 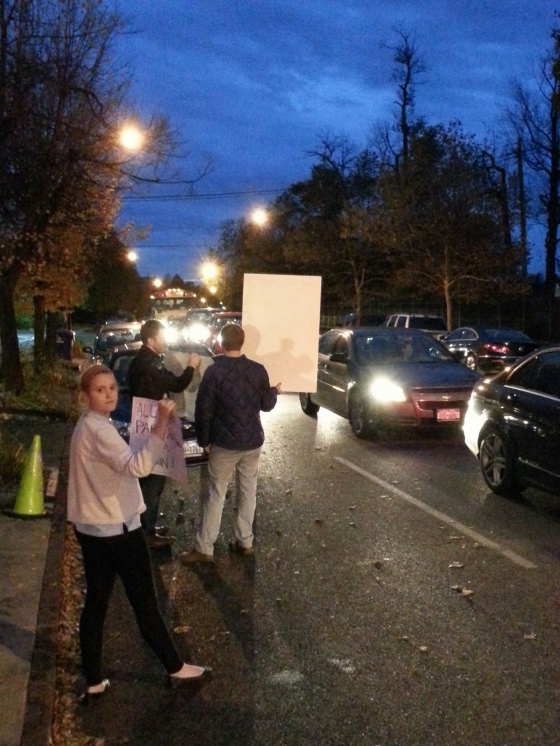 Traffic was pretty backed up with everyone rubbernecking 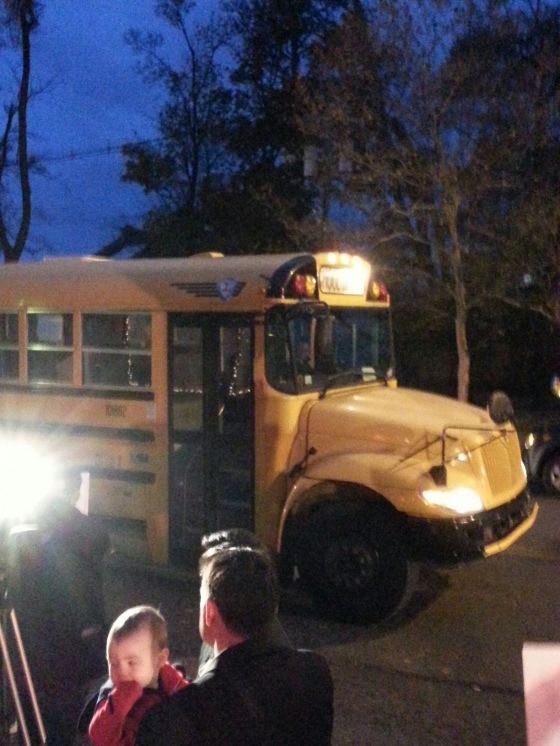 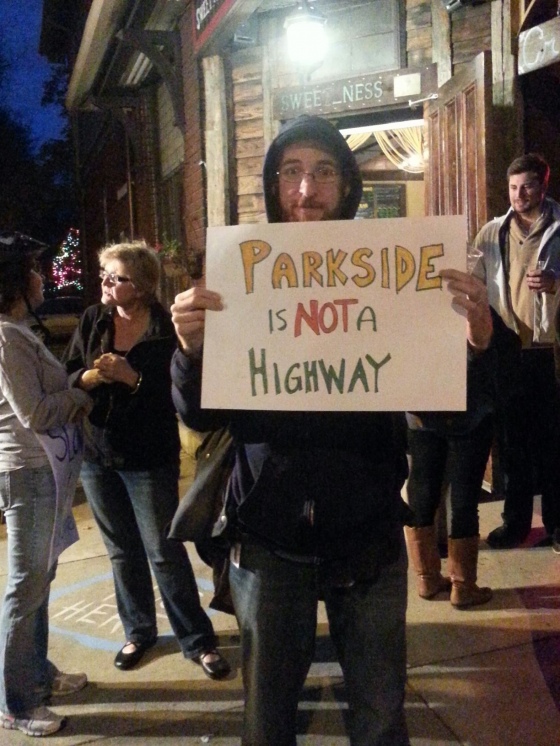 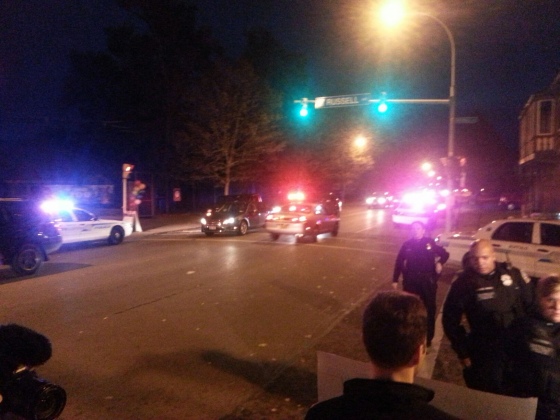 The po-lice shut us downnnn 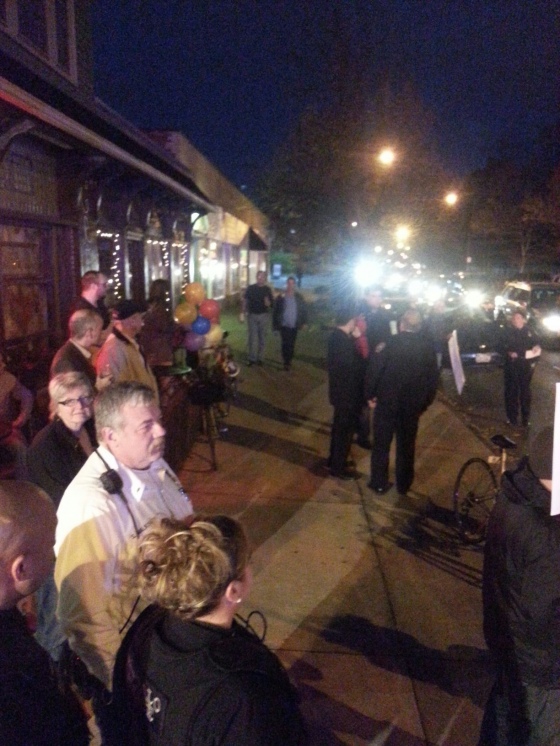 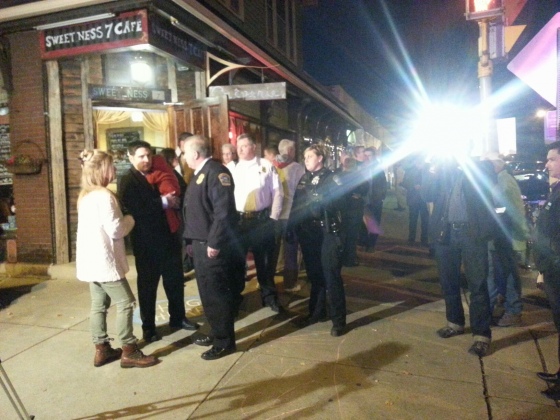 I hadn't actually been to Sweetness 7 on Parkside before. The owner, Prish Moran was super friendly, the shop was pretty cool and there was free beer from Community Beer Works, aw yeah. On the way home, I stopped at Aldi, then took the metro back from Lasalle Station. It was the first time for me on NFTA since the summer. I need to make it my backup after my bike again, rather than my car. 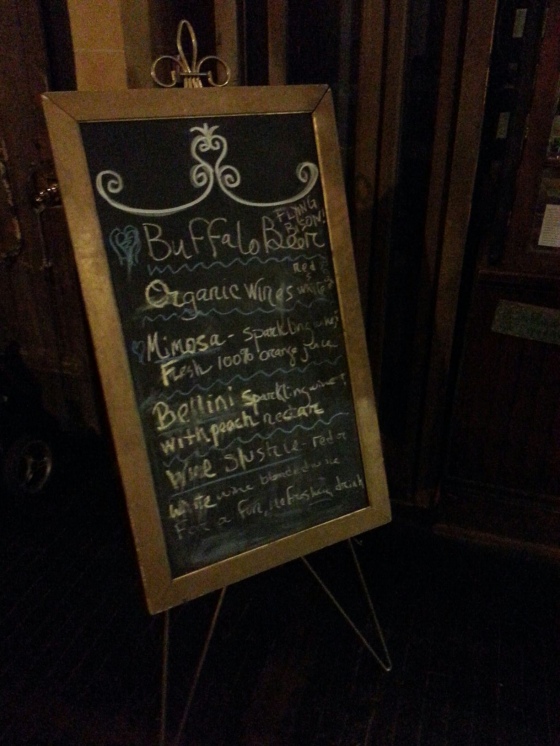 I didn't know Sweetness 7 had a liquor license either. 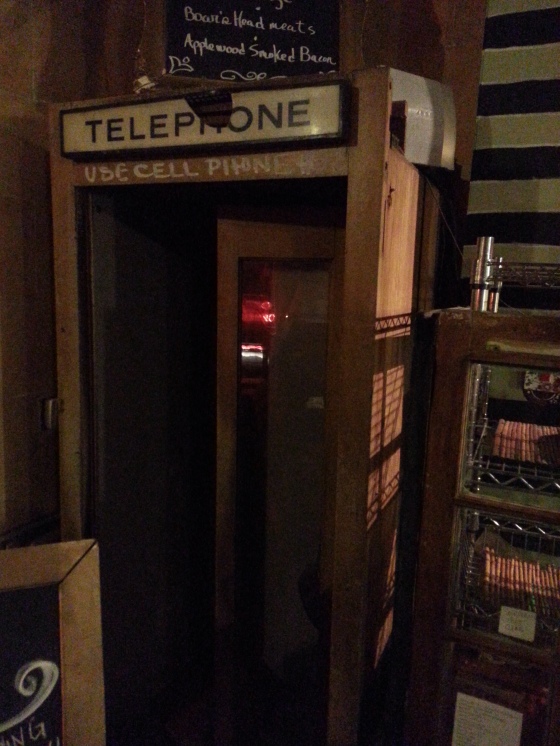 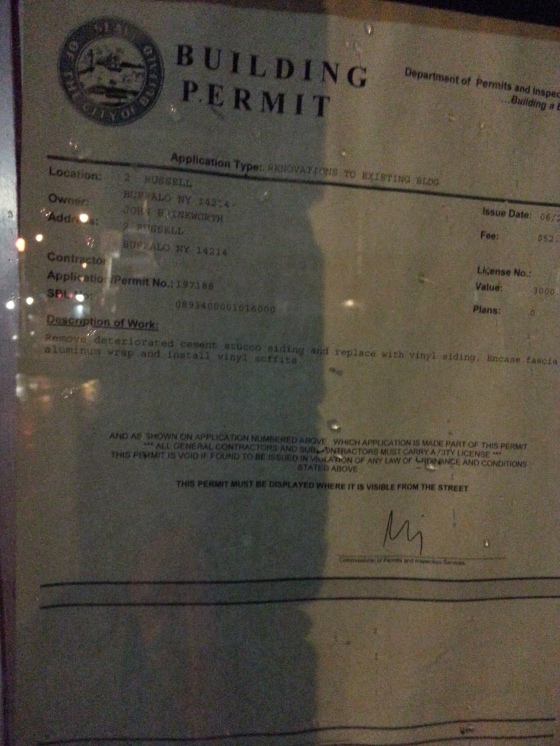 The tudor building across from Sweetness is getting redone - last use was a restaurant I think? Unfortunately they're removing the stucco for vinyl, yuck. 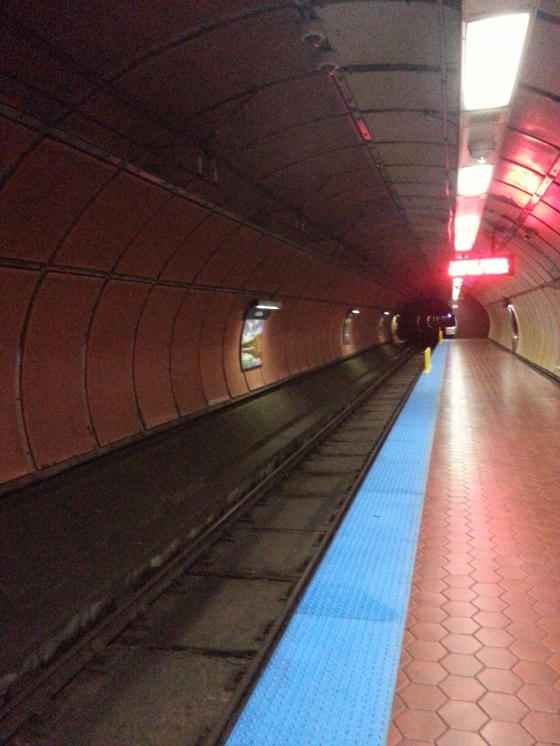 Sounds like a really great idea so I signed the petition. They should definitely look into it and see if it is feasible ie. it doesn't back up traffic too much. I don't feel like biking into N. buffalo is at all biker friendly and would welcome SOMETHING to make it better, thankfully I have no need to go in that direction on my bike.

Yeah I realize it sounded confusing, that's what I get for not proofreading!

Definitely, which is why I hope this moves forward. I encourage you to sign the petition and write a letter to Mayor Brown (Mayor@city-buffalo.com) and DPW Commissioner Steven Stepniak (sstepniak@city-buffalo.com) if you support ideas like this!

At first your post confused the shit out of me. I took it literal and thought you were actually protesting the change, and thought "he doesn't seem like that type??? I would think he would rally for a road diet"

Protesting road congestion and dangerous driving conditions is a worthy cause. I wish there were more drive-ins like this.

Damn, I wanted to do this with ya, but it slipped my mind. Glad you joined them.