Since news and social media is so obsessed with the presidential election, if you don't know who's running on your local ballot, you can look them up here.

The League of Woman Voters also sends every candidate in every state and federal race a questionnaire to get a summary of their opinions.

It looks like for our ballot it's not as useful, because the race was either decided in the Democratic party primary or they never answered. But it allows you to do a little research and at least not be the person who votes based on someone's last name.

I rarely am anxious about anything especially politics but Trump and his racist supporters make me nauseous.

Tonight (e:paul) and I went with some of our coworkers to the Beakers and Beers event at coco. I normally hate networking and forced socialization with colleuges but this wasn't too bad. The fact that I got three free beers and unlimited frittes didn't hurt either.

I saw this "Between Two Ferns" video of Hilary Clinton today. It's pretty hilarious. It actually humanized her a little. (I don't actually care if our president is "humanized", I'd rather they be rational. Even robotically so.) (e:terry) discussed why she is criticized for being so robotic or bad at speaking. I wonder if it's just because she doesn't have a more masculine or forceful voice like many politicians.

I also read the fucking ridiculous and disgusting statements by a Trump campaign manager in Ohio. A billion words have been spilled about Trump and his supporters but I wouldn't hesitate to think many think this way.


"I don't think there was any racism until Obama got elected. We never had problems like this. I'm in the real estate industry. There's none. Now, the people with the guns and shootin' up neighborhoods and not being responsible citizens—that's a big change. And I think that's the philosophy that Obama has perpetuated on America. I think that's all his responsibility. And if you're black, and you haven't been successful in the last 50 years, it's your own fault."
...
"I think you have a real advantage because you had all the advantages—going to college. You had all the advantages because they got into schools without the same grades as a white kid. So I think that when we look at the last 50 years, where are we and why? We have three generations of still having unwed babies, kids that don't go through high school. I mean, when do they take responsibility for how they live? I think it's due time, and I think it's good that Mr. Trump is pointing that out."


I was talking to (e:paul) today about how so many people who were previously just racist beneath the surface are straight up openly racist now. Maybe I just notice it more on the news and reddit, but I don't remember seeing anything like this before.

. A lot of it seems to get teased out and encouraged by astroturfing and sockpuppeting from stormfront/other neo-Nazi sites. Makes me want to vomit.

(e:paul) and I went to the Trump rally protest and it was pretty crazy.

We rode down after work. (E:terry) was supposed to be a legal observer but he was home sick ;(.

The path down Washington divyed up the protesters and the attendees. The whole street was lined with dealers confederate flags, Trump pins and shirts referring to the wall - I know Buffalo is full of racists but it's shocking to see people capitalizing on them in the open, right downtown. 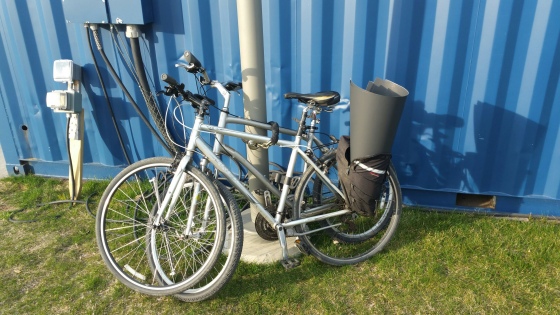 The setup of the protest was ridiculous. Streets were blocked off, canalside was closed, and all protesters had to be funneled into a little barricaded area outside of the HSBC atrium. I don't get why a protest has to be so planned and highly controlled. The news even refers to it as a "free-speech zone". What the fuck? At the very least most parking lots were closed and everyone had to take the metro rail or walk down.

There were an insane amount of cops, none of them hot, and most of them who looked like they had a hard-on for violence with their big wooden sticks. A few were literally stroking them while they were overlooking all the free speech happening.

Apparently a few hundred protesters requires hundred of cops, state troopers, secret service and a rooftop sniper. Seems ridiculous to me. If anything they're letting crime happen throughout the city by all sticking to one place. 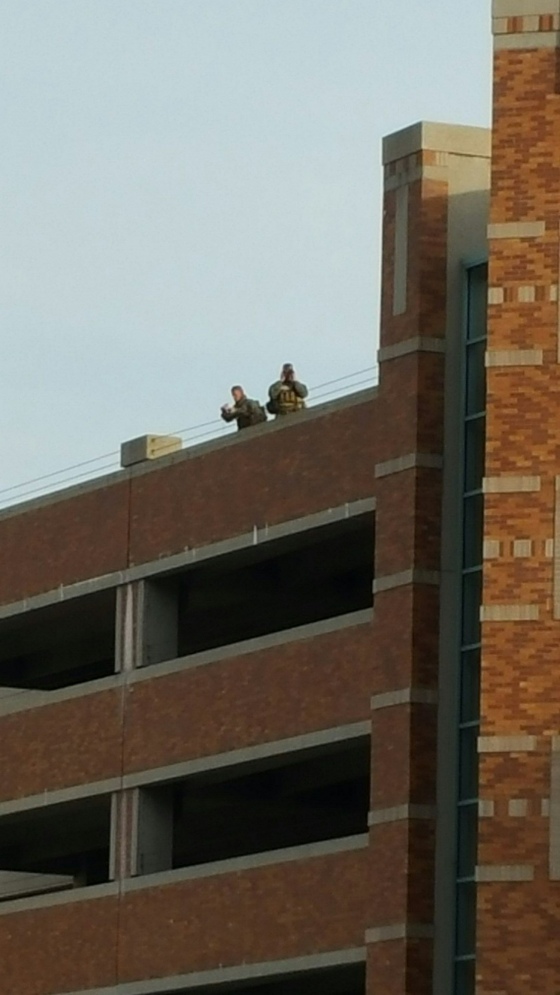 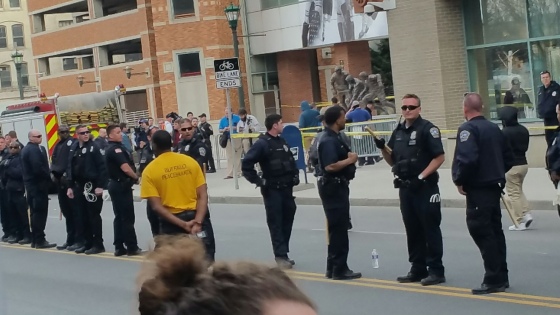 The protest started off big while the Trump supporters came down Washington to the area doors. Some Black Lives Matter organizers led some chants and cheers. People were cheered as they were kicked out of the rally (or denied entrance in the case of (e:enknot)).

It was uneventful until about 8pm, when some decided to lead the protest down to the metro tracks, underneath the 190 bridge. This was right about when the first metro train after the rally was to leave. A metro rail packed with Trump supporters.

The police got their wish of a conflict - all of them marching up main street with their clubs, dogs and horses, shoving people back.

After 10 minutes of this we left with Brian, but halfway down Main Street we thought "well, (e:terry) would have stayed" and turned back. This meant salmoning up the sidewalk through the Trump crowd. Right when we locked up our bikes, most of the group decided to march over to the holding center where some protesters were being booked.

Outside the holding center everything fell apart. A girl named Whitney was trying to get everyone to be quiet by going around and asking if hey were a leader of the protest, specifically (e:Paul), Yan and myself. I have no idea why she thought there was any single leader at all - it was clear there wasn't - and why Paul and I would be those people. Especially if there was any sort of defacto leadership at that point was the BLM people.

Apparently her friend went in and got arrested asking about people arrested at the rally. The holding center staff told her if we protested, they'd keep her friend longer.

First of all, the fact that they threaten to hold someone longer just because of a protest is fucked up. How can you make conditions of a detention related to things outside of their control, outside?

Second, I don't agree with her that she should reign over other the protesters just because her friend was now arrested. I stand with (e:paul) that the protest was not some group with a single leader, or some facebook event that you must adhere to someone's rules for. It was offensive that she would even ask if we were leaders when BLM leaders were legitimately protesting. Was she afraid to ask them? Did she know how silly it sounded? On top of it, what is a protest where no one can hear or see you?

However I was not about to get into it with her or anyone else. Escalating a stupid argument on an otherwise good night is not worth it, so I dragged (e:paul) away and we rode home.

I have mixed feelings about the whole shindig as my first protest. I doubt we convinced many Trump supporters of anything. Hopefully we made some reconsider. So what did we accomplish? I'd like to think we made a message that Buffalonians aren't as terrible as they seem but at the end of the day there were way more of them than us. 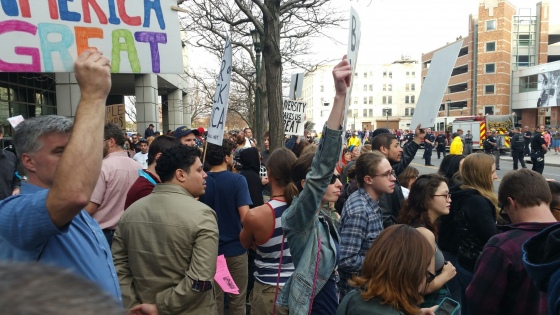 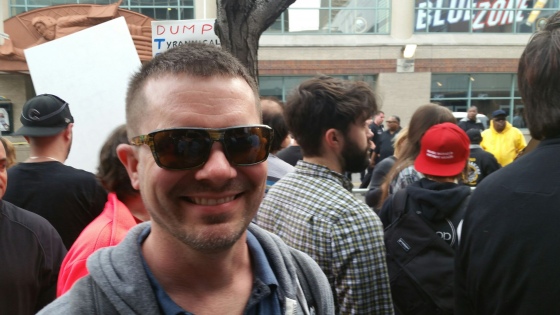 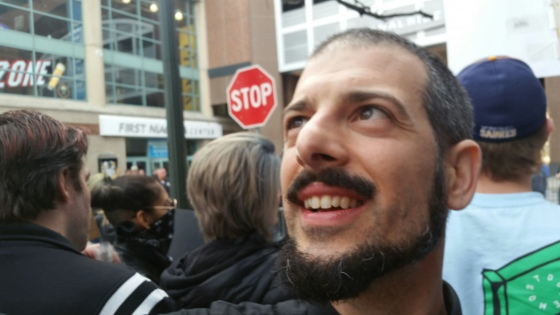 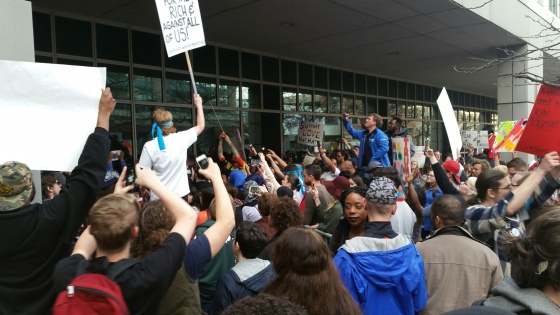 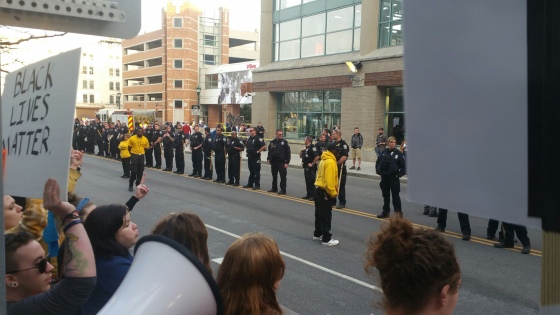 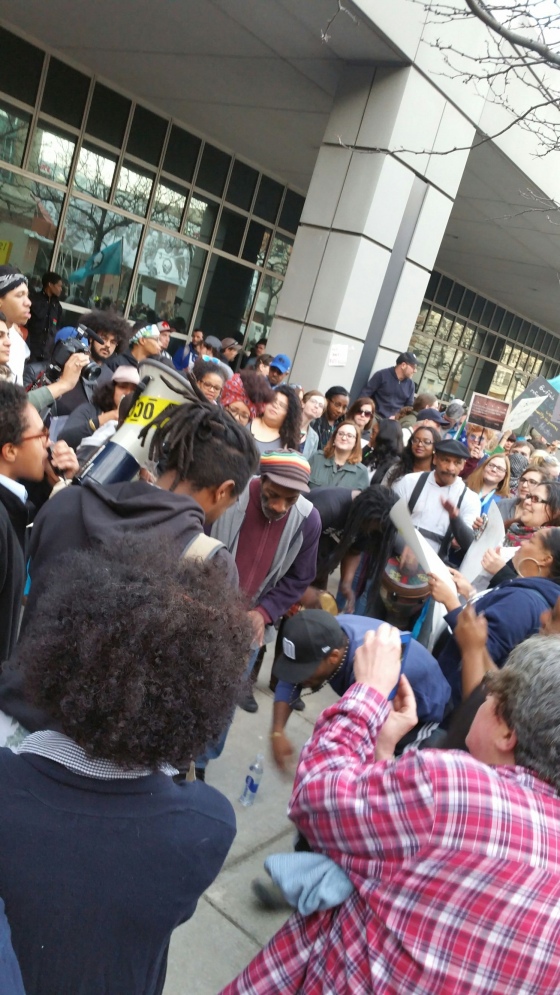 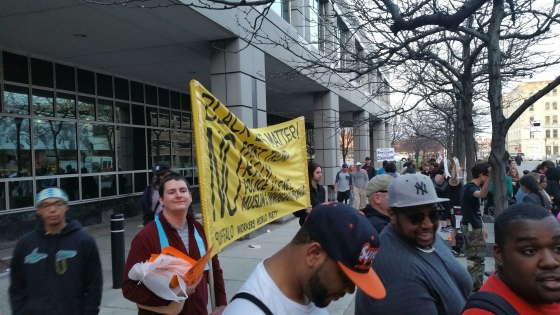 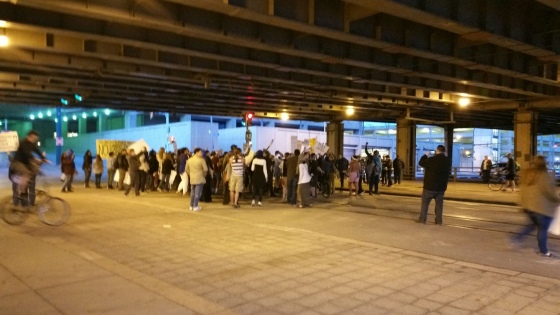 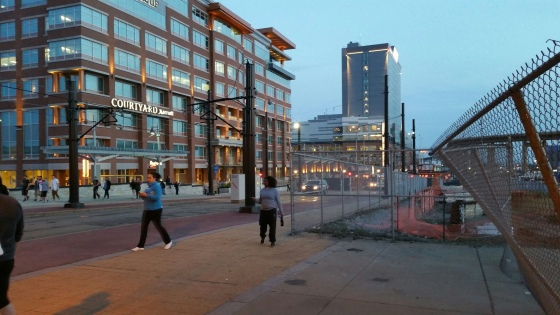 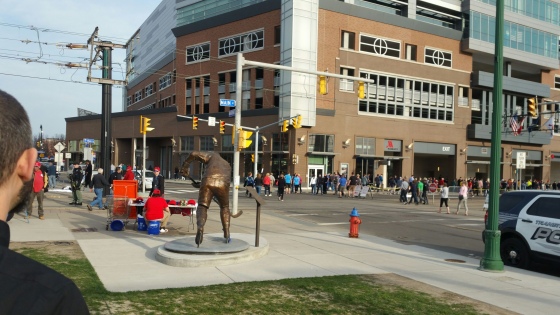 Did anyone else vote this year?

It was my first year voting in New York, since my first chance to vote was in Ohio and I never updated my registration until this year.

It was real easy. We just went across the street to Trinity Towers. It seems kind of crazy they just take your word that you're you, and there's your ballot.

The last time I was at a polling place in New York was with my parents when I was young. When did they get rid of the lever machines for scantrons? I remember getting so excited to go in the booth with them, flip the switches and the satisfying ching that happened when you cast your ballot and opened the curtain.

I am not very political or into local politics - but I knew about a couple races. I wish I knew more but I trust local news to give me any accurate information. For the most races, there were zero choices anyway. Just the same candidates running on 5 different lines, most of whom have been around forever. I think that says something Buffalo.

After work yesterday, (e:Terry) and I rode our bikes over to meet (e:YesThatCasey) at the PAI Power Hour at Niagara and Rhode Island. PAI is the Public Accountability Initiative group that tries to expose connections and conflicts of interest between powerful people and decision makers. I actually have heard about them before in the news and never knew they were based out of Buffalo!

The director, Kevin Connor, talked about what the group did, before leading a sort of walk through on how they approach an issue. They take an issue, list the power brokers involved, and start to find relationships between them to see who and how can be leveraged into accomplishing a change. One example they did was identify the Center for Sustainable Shale Development(fracking), allegedly an industry/environmentalist group for fracking, as a sham. PAI investigated all of the environmental groups involved and found they were funded by the Heinz Foundation, which was controlled by natural gas directors. The report the produced ended up causing three people, including the president of the Heinz Foundation, to resign and pretty much ended the CSSD. Link

The example we ran through was with Buffalo Public Schools, which ended up getting derailed into pretty pointless discussion.

One of their main tools is a site called Little Sis. It's kind of a database of important people to list their connections, donations they've made and recieved, organizations they're in etc, and can dynamically generate charts showing the relationships between different people. It was really an awesome tool, and was basically developed by Kevin and another developer out of NYC. Apparently it's all PHP and MySQL now, but they're working to migrate it over to Ruby. I wonder if they ever considered open sourcing something like this, it looked powerful. 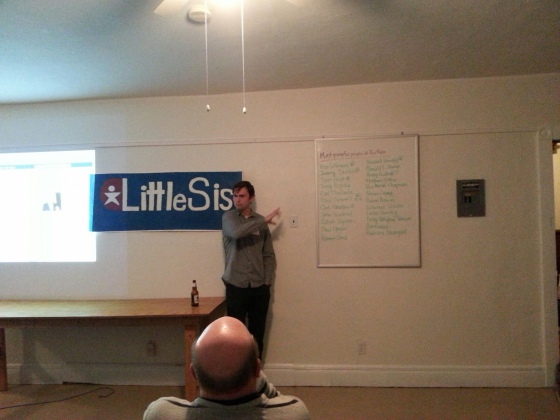 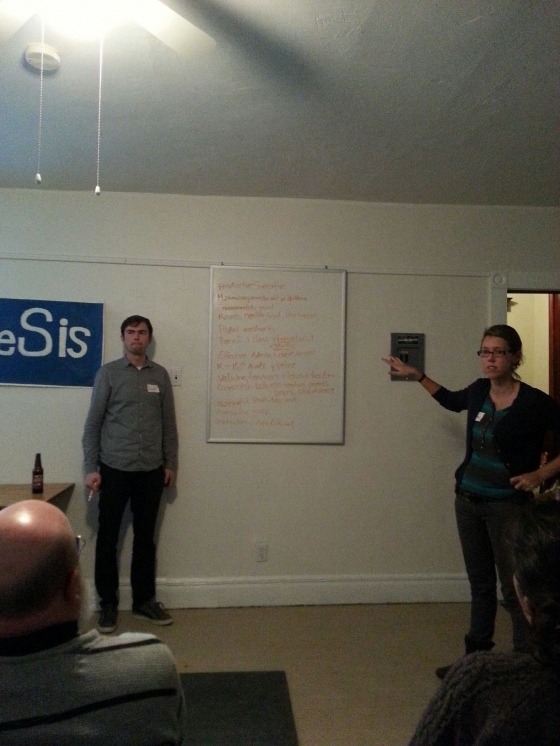 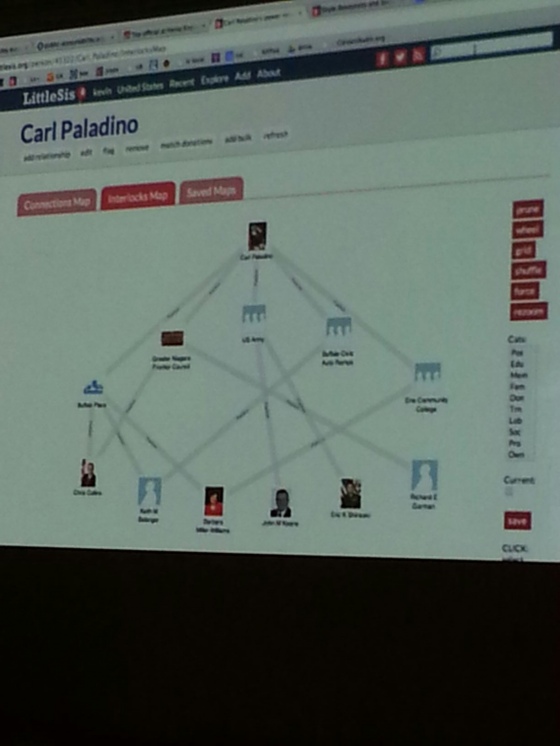