Take it and show them how pathetic Buffalo's speeds, are especially if you're with the extortion that is Time Warner!

Personally I'd love a municipal or county owned fiber network but I doubt they're build that out. I'd definitely take something like the private Greenlight networks in Rochester. 100/20Mbps for only $50, less than we're paying Time Warner for a third of the speed.

I use Firefox and heard about Firefox Hello and pocket a while ago. I always ignored them in the browser because I assumed they required an account or were some third party plugin paid to get to the browser.

Well I guess I underestimated Mozilla because Firefox Hello is pretty cool. You just hit the Hello extension button and a link is generated on firefox's site. You can share the link with any WebRTC supporting browser, and it lets you text, voice, video chat, and web browse, with no other plugins or accounts. It's also all peer-to-peer, and end-to-end encrypted.

Meanwhile Google Hangouts is still not end-to-end encrypted, and still wants to use a Google Talk plugin in Firefox.

Unfortunately they took it out for version 49 of Firefox and never added it to the Android version.

Luckily the source for the server is still available, and written in Python.

It would be cool to integrate with the Patient Portal at work or here on (e:strip) for any sort of video work, especially since clients can just be JS. 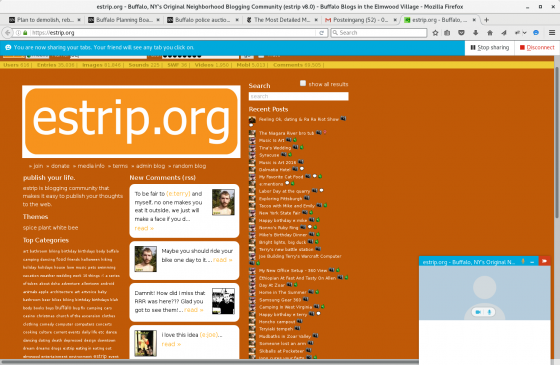 In other random internet things I found amazing artsy pictures from the Honcho Campout (e:joe,60626). NSFW if you can't see furry naked junk at work.

Speaking of net neutrality and real internet providers, when we were in Rochester, (e:masumibot) told us about a new ISP there called Greenlight Networks.

It's what Buffalo and every other place cursed with Time Warner deserves. Basically, it's a fiber ISP that taps into all the existing private fiber networks that were built in the in the late 90's and 2000's (often with government money) and resells service to small business and residential customers. You can see a map of just Fibertech's network here

, which includes a trunk right down Linwood and throughout most of the city.

This is in the same service area as Time Warner, who charges a fucking outrageous $250 for 35/5Mbps at Allen Street, with the worst customer service I have ever seen. For fiber service in the city, Fibertech wants over $1000/month for any sort of connection plus huge install fees.

I feel like we're in a internet desert, with a fiber oasis in front of our house that we can't reach.

In other internet news, there is a group trying to start an free, hyper-local, open access wireless mesh network in Buffalo. (e:paul) says he dreamt of this 10 years ago. The group, called Buffalo Mesh, meets at the Foundry, where they already started to build out their network. I wish I had more time and knew more about networking so I could get involved.
Buffalo Mesh

The FCC chairman Tom Wheeler published an editorial in WIred the other day calling for the FCC to regulate Internet to be regulated as common carriers, just like phone companies. This is going to be decided on by the FCC in the near future.

Everyone kept telling me he was from the cable industry - it turns out he dwasn't from Time Warner or Comcast, but he did run an experimental cable company in the 80's. Unlike dial up providers with phone companies though, the cable companies didn't have to give them access to their network. It's kind of awesome to find out someone regulating business that isn't from that big business.

He also was behind a recent FCC reclassification of broadband speeds from 4/1Mbps to 25. ISP's can no longer market anything else as high speed.

By treating internet providers as common carriers, they will no longer be able to shape or restrict traffic based on origin/destination. I'm sure they're going to fight tooth and nail against this but if this goes
Unfortunately the FCC will not be attempting to regulate pricing. ;(

Uhh, he was a lobbyist for the cable industry, including president of that organisation, which is a really important aspect to leave out. If you look at the general trend of lobbyists actions upon taking on or coming from a government role, there is a lot of reason to suspect his aims. The backlash against their initial loosening of restrictions is far more responsible for this rhetoric than Wheeler himself.

I also think you overestimate words. I don't think it's an accident that he is proposing this now that republicans have full control of the legislative and judicial branches. Much in the same way that Obama's rhetoric on taxing the rich in his most recent SOTU means nothing when it comes to actually accomplishing it with republicans in control of the legislature. Congress has already stated their intention to challenge the FCC on this matter.

How far would you go?

How far would you go, to save your news station?
I was reading an article on WIVB's website and this huge ad for a special on WGRZ came up/
It seems so crazy that Channel 4 can't or doesn't manage their ads to prevent something like that showing up. I guess Channel 2 must be targeting pages about spice? 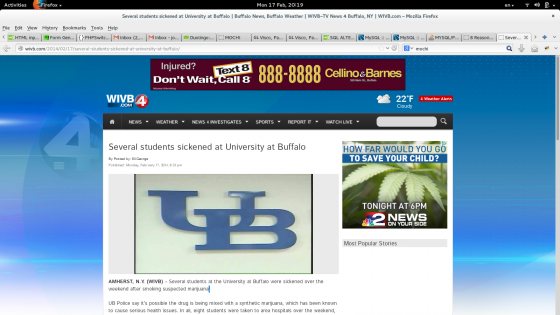 Are they competition? I guess I am demonstrating exceptional "dense-ness" (or is that density?)

It's the save your child one. It's just crazy how an ad for a thing on channel 2 ended up on channel 4's website.

okay, I am lost. Is the ad the "save your child" bit or the "don't wait" bit? It looks like its part of the website. I thought WIVB always had a very garish site with ads.

Could we get an add on channel 4?

The New York Times ran this advertisement-article about streaming home security cams, a company that makes cameras and has a website to view them.

To me it seems somewhat paranoid to have cameras everywhere in your house. I also would never trust sending all of it to an external site where you have no control of the data after that. If you can access it there who else can?

Anyway in the article they talked about how a pet store in Michigan strapped a camera to their desert tortoise who roams the store. It's so freaking cute. I'd say Basra should have one but I'm not sure sitting in the brown room is exciting. maybe in the yard. 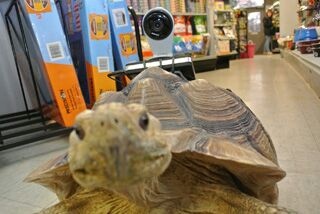 It is like when you hear this ads on the radio for a security system where you can see what is going on in your house and if kids forget to lock door you can... You just locked out the kids if they don't have keys leave your phone and any one can watch what you are doing .... Let alone where they have it on another site what if they get hacked like target ?

omg! basra needs a camera and a skateboard yes