At work I still listen to a constant stream of German in the background so that maybe I'll pick up more. Lately it's been Digimon. It's a cute show that's easy to understand without having to watch the video.

They're all on youtube so it's very easy to listen to them on my phone. The second video is so freaking cute with the little digimon babies.


While I was listening to it I realized one of the digimon (Gabumon?) had a familiar voice. I realized it was one of Terry's German voices. Then I remembered him saying that when (e:paul) and (e:terry) were in Germany, Terry learned a lot by watching Digimon and Dragonball Z. Weirdly enough there's a character named TK in it.

It makes me wonder what kind of speech habits I pick up what I listen to. When I read German text a lot of phrases get repeated how Ladykracher's characters would say them.

hehe, for a while there I started to learn Polish but the language proved too tough for me... too many zzzzzes. Maybe I should take your example. I also want to learn Spanish, considering I already sing a lot of random stuff in it (even though I don't know squat).

I've been trying to do immersion with everything German to practice my Deutsch,. I've been using these "Hörspiele" or radio plays from Tim Staffel. (e:paul) and (e:terry) met him at Paul's school in Jena, and had one of his CDs "Stopper". I did some googling and found another called "CB-Funker"

I can't always understand every word, so I last week I wrote him and asked for the texts to the ones I had. Awesomely, he wrote me back with both transcripts and his newest play.

It's crazy to think how accessible the internet makes language learning. Even 20 years ago I think your only resources for self-taught language learning was the library, and whatever media you could order in the mail. Now I can write a German author about a play he wrote 15 years ago and get the transcript of it almost immediately.

Dear Joe,
I am very happy to hear that you like my radioplays. I remember Paul and Terry well and like to think back on them. Maybe you can give them my regards.
I am gladly sending you the texts, they are protected by copywrite. The "Stopper"-text is probably not the same as the radioplay version.
I am sending you an additional piece - Paradise Lost - maybe you like it too. That radioplay I send via WeTransfer.
Your German is super - 10x better than my English.
Best Regards,
Tim

I finally finished the Duolingo German tree yesterday. I really started working on it in the beginning of the year, so the majority took about 3 and a half months.

I think Duolingo was really useful, and sort of frustrating, to get basic grammar and vocabulary down for reading and writing. But in terms of listening and speaking, I got almost nothing - I'm still pretty terrible but getting better.

I am going to keep using the review part to practice, but I think the only way I can pick up more is immersion with news/shows/music in German and trying to speak it when I can. It's hard for me to start speaking it, even to (e:paul) and (e:terry), because I mess up a lot and it gets frustrating. Back to chatroulette, or chat-de?

It's picking up fast and I really love learning it - I can't believe how much I know already when before this weekend ((e:joe,58063)) the only German phrase I knew was "Der Hund schwimmt!" 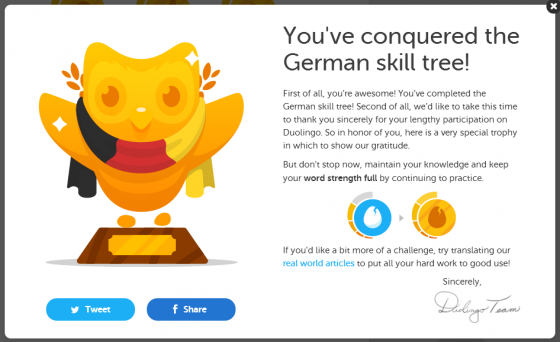 Have you used the browser version? you can translate real spanish selections from the internet and compare it to what other people did. It helps a lot.

oh, i know! I've been using duolingo since it was in beta, but i always start and stop, so it's just a matter of discipline for me, i think.

I am really pleased with the app.

It's really good! Once you get in the habit of doing it and build up a streak, you never want to let it die. Plus if you have it on your phone (there's an Android and iOS app) you can do it anywhere.

I'm so ;azy with duolingo... i admire your drive!

Okay, you need to stop using fluorescent colours as background. :P I looked up and I see all orange and green bands now!

Man I need to do this for Spanish. I have wanted to learn it for AGES!

A little lebensmüde at the retirement home, I guess. 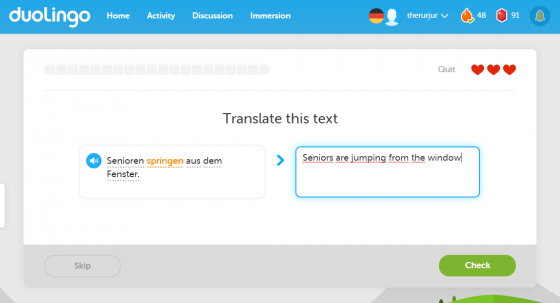 Hopefully I'll never need to use this sentence.

Lately (e:Paul) and I have been eating so much spaghetti and pasta for dinner. Usually it's the corn-potato-soy noodles from Target or Wegmans, sometimes the quinoa. Last night we had this crazy good fresh rice pasta from Wegmans. Paul put butter, cheese, walnuts, and we ate it with boiled greens, asparagus and chopped purple cabbage. 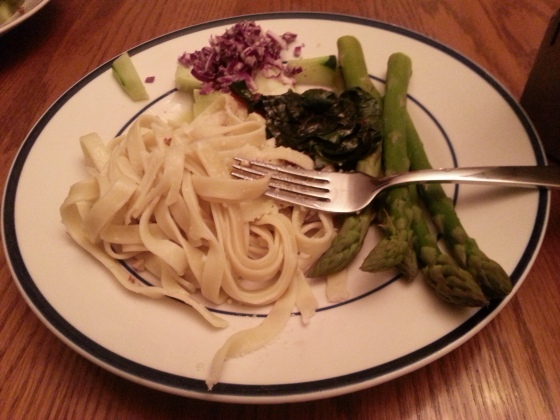 Watching these videos from this comedian called Ladykracher, we learned the German slur for Italians is "spaghettifresser" or someone who eats spaghetti like an animal. I don't know if that's actually offensive to an Italian but it doesn't seem to have much of a punch in English. I'm not Italian but I'm definitely a spaghettifresser.

I am a proud spaghettifresser!!

Besides using duolingo to German, I've started to use this old book that (e:terry) used to learn Deutsch called German: How to Speak and Write It. Apparently it's pretty standard but it's also redonk old, like post-war old. It's helpful to have entire passages as opposed to single sentences in duolingo. The drawings are cool also. 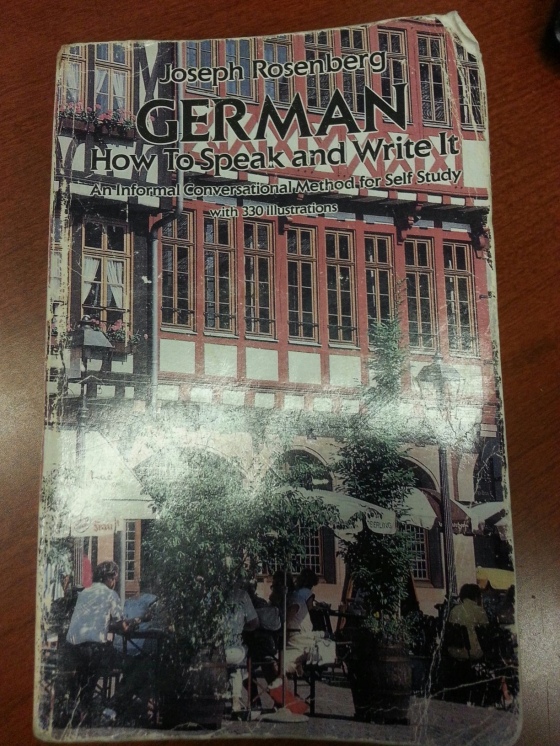 It's also crazy dated in a sexist sort of way. Paul and I were reading one of the passages and it says


Guide at the Niagara: "My ladies and gentlemen, this is the strongest waterfall of the land, and if the ladies would shut up for a moment, you can hear the terrific roaring of the water!" 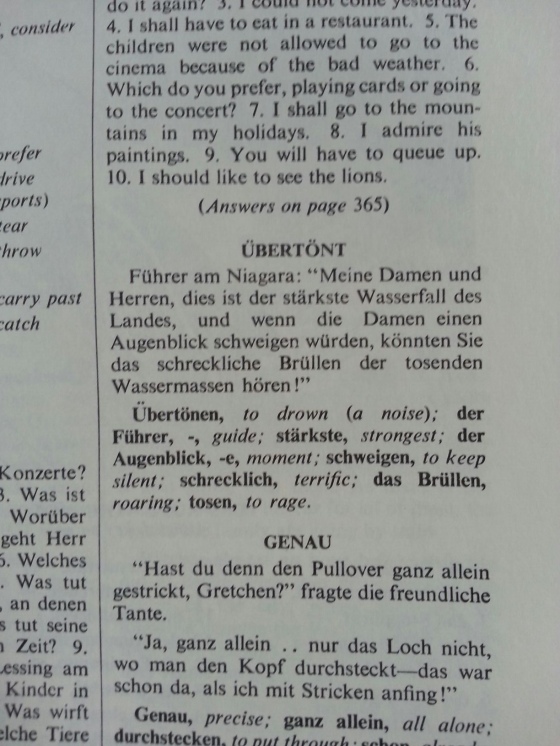 And there's a semi-dirty passage about Frau Schulz getting her hole filled at the dentist. For only 5 dm! 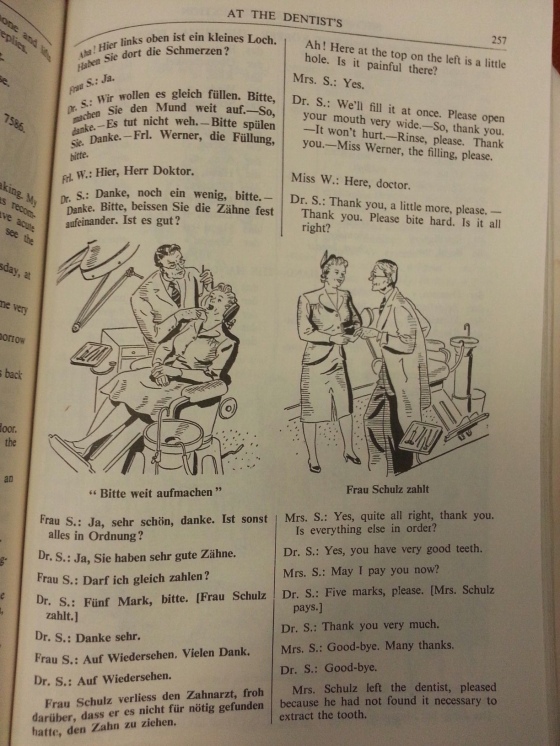 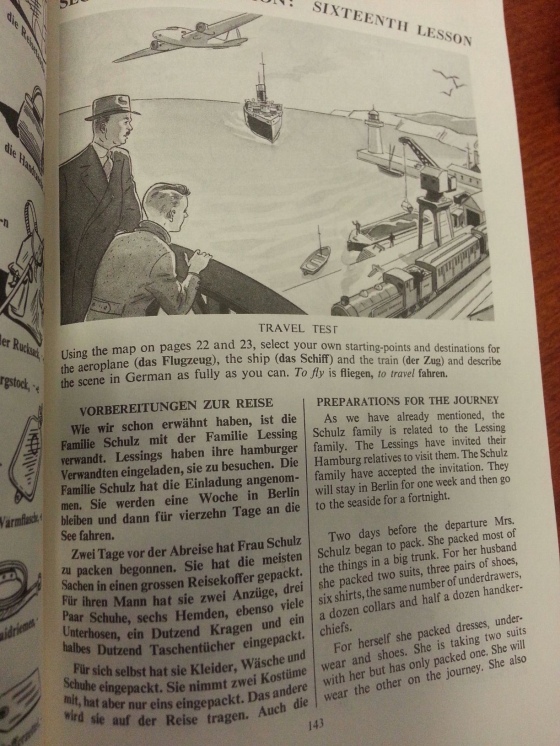 Whenever you go on vacation, pack at least two suits and 6 handkerchiefs.

Anyway I hope going through this will help me get better at speaking and grammar. Ich will einmal nach Deutschland gehen!

In addition to the Flappy Birds fiasco, I've been stuck in 2009 and chatting on Omegle to practice German. (e:Paul) and I spent probably 7 hours this weekend looking for Deutschers to chat with. It's really good practice because Duolingo doesn't really have much of a verbal component.

We spent 3 hours talking to these drunk Turkish girls. Apparently I've aged poorly because they thought Paul was 25 and I was 30. We exchanged Whatsapp and snapchats and now we have to make a Turkish baked rice pudding called f?r?n sütlaç. 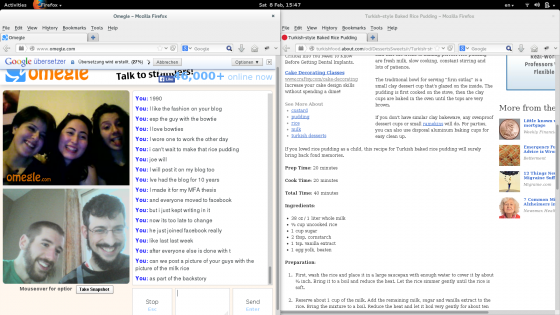 We also talked with a weird Russian boy who apparently was recording his sister having sex. He thought Paul was 24 and I was 26. Yeah I thought we were going to get arrested for that one.

Last person we talked to was to some Austrian kid. He was super impressed with Paul's German, especially when he pronounced these two redonk German words.

are u know deutsch?
I study 1 semester and i like this lang.
ich liebe deutsch.