A college roomate of mine is getting married in June.

His bachelor party was Sat. No need to go on in detail about that, except that I have finally figured out how to have fun at strip clubs.

Seriously, this was the first time I didn't hate a trip to a strip club.
(Actually I was there with (2) bachelor parties: my roomie and some dudes I used to work with)


So anyways, the cool thing that happened was that we were hanging out at this dudes parents house before everyone went over for the party.
His dad plays the banjo, and me and him hung out for a good hour talking about the banjo.
I guess I never really appreciated the intricacies of the instrument. But Tex could do some relaly sick shit on the ol' 5-string.

And this also made me think about how much banjo music is in my life.
Which is pretty much nil.
Except for that 'Grateful Dawg' album, which is OK. But Tex said that David Grisam doesn't have cred within the banjo playing community.

Wed night was the game, and that was fun.
I walked down the block to Faherty's.
Its fun in there when its packed. You end up meeating a lot of different people.


Anyways I wonder how drunk I was last night, because I remember doing some stupid/strange things.

I went with some girls down to Mothers, on Virginia. I don't ever remember how I Met them, I think I just asked if I could go with them.
(this is wierd, because they were all hot, and I think I would usually be intimidated by a group of hot cool girls)

We hung out there for a while, then we all got set to go somewhere else. I started walking in front of the group then I just started running.

I ended up running all the way to New York Pizza. (what the fuck? running??)


At New York I ended up in the back, talking with some really drunk people. They gave me a yoohoo and topped it off from a big ol bottle of canadian club.

Then I started washing dishes there.

Goddamn it, this shit is too wierd. What the fuck is going on? Am I OK?


I really like summertime. I'm sitting here on my couch and my window is open and I can hear the street and the city I don't think there is anything more relaxing than this.

well, I hope that was cathartic for you...

[A] HAMSTER WHEEL.
This is when time just keeps wrapping back on itself.
You can keep going and going, but the faster you go, the faster stuff repeats.
Tip: chill out in the hamster wheel, read good books, get enough sleep, and enjoy the scenery cause the ride sucks sometimes.

[B] CHUTES & LADDERS.
Similar to [A], but different topology.
It doesn't matter where you are on the ladder: theres always an eternity above and below you.
Consider: doesn't it ever seem weird to look back at, say, the 1950's and check out what they thought was ultra-modern. A lot of it seems ultra-silly now, but trust me, we (2000's) are going to look dang ridiculous in 60 years. Such is life on chutes & ladders.
Tip: chill out in the hamster wheel, read good books, get enough sleep, and enjoy the scenery cause the ride sucks sometimes.

[C] WAVE OF MUTILATION
Ever feel like you're on the nosecone of a rocket hurtling through space(time)? My friend you are riding on the wave of the future. There is no AAA guide to where you are going.
Welcome to the frontier....of the future!


Right so thing about the above. I might not be a good writer (or explainer) but I think that helps describe a lot of stuff about the human condition. We can expand upon that at a later date.


I want to close tonight in saying that I am pretty sure that the blue-jean pant is to the human ass as the electric guitar is to rock and roll.

Thanks. I believe it was at the Minnesota station, but it was a couple years ago so I don't recal.

I like your new user pic. Is that Humboldt Hospital Station?

I had a dream last night about a bird woman.

Actually it was a bird (like an ostrich? or maybe another flightless bird) that became anthropomorphic and kept changing into a lady.


At first I was on the floor and afraid of being trampled by the giant bird lady, but as she became more human, she grew a female ass.

I started to work on her, but she turned around. With a big beak head.

Then I woke up and realized I was late for work.

YOU CAN NOT FUCK WITH THIS BAND

One time, a few months ago, I was at a popular local bar with a friend. (Coles)

She got me a drink, it was supposed to be a White Russian.
But the dude got the container of milk mixed up with a container of orange juice.


To be honest, it was delicious.


I named the new drink the 'Orange Drool-ius'

She told me it was a wussy name.


I renamed it 'Plutonium & Lead' because "Plutonium and Lead would kick anyone's ass."

I had a shot once called a Tootsie Roll that was just kahlua and OJ. No vodka though. Tasted surprisingly like a tootsie roll.

It is a good thing that the Violent Femmes are playing in August at the Square.

Work is fun now that I don't hate my boss. We all laugh a lot more during the day now.

Weekends for the summer are allready filling up with fun shit.

I am super fucking stupid.
Eg: Last week I needed to get more TP as I was on the reserve roll.
Fucking TP: its a very basic staple. Rather necessary, and when you get low you really shan't dawdle.
So I trucked down to the store, jamming out, thinking about stuff, and talking to people on the phone.
This was enough distraction for me to forget my original intention.

I came back to my place with Cool Whip (among other things) but no TP!
Fuck! I certainly did not require Cool Whip, nor anyother kind of Whip yet the one thing I did in fact require was not purchased! ERROR! If I was a goldfish I would be flushed down a toilet allready.


I am a dumb bastard with no concept of time. Not unlike a lobotomized cocker spaniel, I have no concept of 'tomorrow'.
Its always today in my balsa wood brain, and taxes, bills, laundry, etc can always be put of till 'tomorrow'.

Hit me with a bat.

yeah me too. The femmes were one of the first concents I saw, in a teeny tiny little hole of a bar. And keep the posts coming... always good for a chuckle.

I love the Violent Femmes!

holy shit I am so happy with the schedule for the Square this summer.

Fuuuck, my boss finally got fired. He made it 3 months.

He was probably the perfect bad boss. He had no redeeming values.

Not only did he talk about his sexual shit, he went on in great detail. For hours. About the girl in HR he was fucking. In front of other HR people.

Dude had no technical knack. But he wouldn't admit it. (as a maintenance manager, you should know the difference between a Phillips screwdriver, and an allen wrench)

Also its not cool to make 'homo jokes' infront of the lesbian supervisor. Or poking the parts clerk in meetings. (The doodles you drew on her notepad though, you know, the ones that look like a Babysitter Club Monet - I'm probably going to laminate that and hang it on our fridge in the office)

So S, ( I don't want to say his name! How about we say it started in St and ended in eve. This guy was my *starts in P, ends in et Peeve*), you are the most powerfully stupid mutherfucker I have ever worked for, and that puts you somewhere in a hall of fame (or at least a freakshow), because that is a group of brain surgeons that no mother could love.

Shithead: HR heard your grandma died. They want to send you what you are.

me: what do you want?


Ah but what I wanted was for you to fall off a cliff, but this will have to do.

I think by 'collect al their names' Paul means "go shopping at the grocery store" and by 'go digitally postal,' he means "bake a delicious key lime pie."

I hate people like that. I used to collect al their names for the day when I go digitally postal.

How could I have missed this glorious rant? Very, very exceptional, Kook. It's an A grade rant!

I took some days off last week on bereavement.
And this was good, and I traveled some.

Went to Cornell to see my sister.
Stayed at my folks house for a couple nights and took care of some stuff there (Grandma arrangements, etc).

Played the last show with the band last night, and it ended appropriatley in oblivion. No further comment.


Anyways, this is the cool part: Across the road from my parents house is a corn field.
But in the middle of the field is the old farm house and barn that burned down 20 or 25 years ago.
It burned down, but it was just left the way it was. So its been decaying back to nature, but there is stuff that is just a snapshot of the way the house was when it burned.

I used to go over there as a little kid, until someone told me there were rattlesnakes over there.
Then I would hang out over there as a teenager, half out of my mind and angst-y.
The silos were where I was going to put my antenna for my pirate radio station that (a) had no transmitter and (b) had no content.


So here are the good ones: 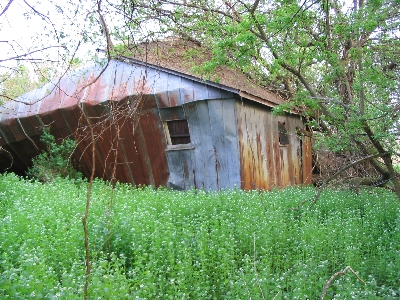 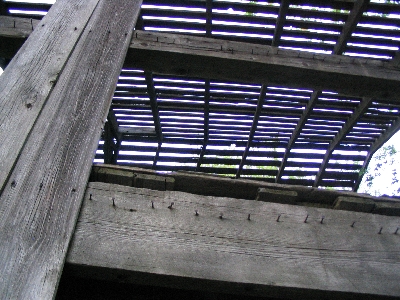 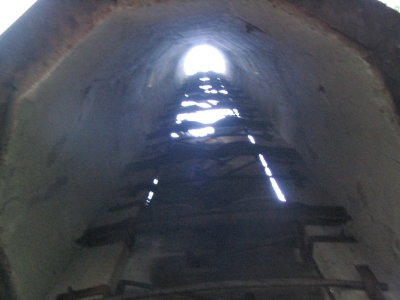 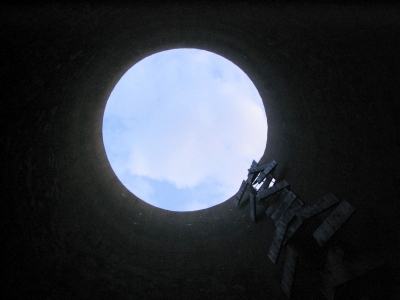 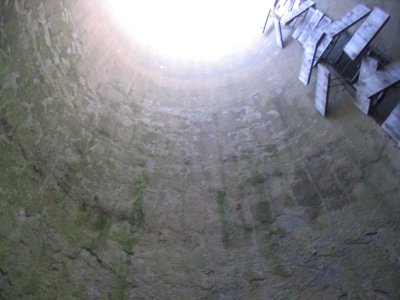 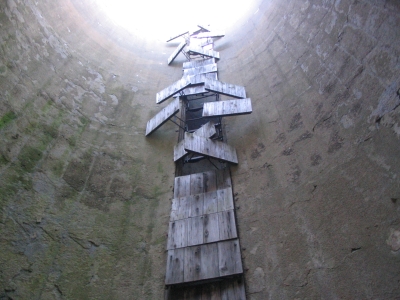 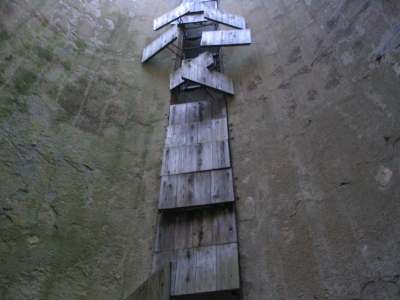