the last two cupcakes.... Glad we saved them from the horde.

Chocolate cupcake recipe from the 1989 edition of the Good Housekeeping cookbook, which has great instructional sections for beginning cooks. I made two kinds of icing: fireball whisky cream cheese, and traditional butter cream. 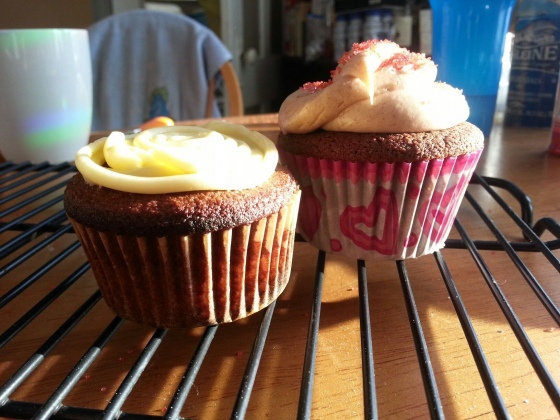 They were so yummy! Thanks.

I have defeated the ice machine! I made ice last for 24 hours!! The trick is to freeze fairly big blocks of ice - I used some ~20oz plastic food containers. The ice slips out with just a quick run under water. Then I filled the rest of the machine with some smaller blocks made from little soda cans and regular ice cubes. I don't recommend the little soda cans - the edges were too sharp after I cut off the top. The bottoms of half gallon milk jugs would probably work well but I like being able to close and stack the tupperwares.

(e:Dianne) is recovering well from surgery for the most part. She's able to make her own coffee already!

I am so grateful to Tanya, (e:bluevelvetjack), Mykal, (e:Terry) and (e:Yesthatcasey) for their visits and hostess gifts of ice, beer and mayonnaise.

Pho Dollar, 322 W. Ferry at Grant is really yum. They have a vegetarian menu but you have to ask for it. I had the tofu with ginger and veggie spring rolls. It's currently cash-only. Pho Dollar - a real upgrade from Pho 99 on Bailey?

I got a better night's sleep last night and I'm not so whiny. D's in a LOT of pain - she just weeps from it. She did one set of exercises yesterday, but she overdid it and tried to achieve what she's supposed to do by next Friday. Today, I wouldn't let her time the exercises, I made her listen to her body to determine what is "too much". She did two sets today. (e:bluevelvetjack) hung out with her today while I went to the office for a while.

(e:Dianne)'s surgery went well yesterday. There wasn't a partial rotator cuff tear, so it was a lot of clean up. They used words in this article to describe it to me:

and said these words too

but the recovery listed in the second article seems incompatible with what the nurses and doctor said after the surgery. So confusing. The staff at the surgical center were super nice and remembered us from the last surgery in July.

Tanya brought two huge bags of ice and sat with D for nearly three hours while I attempted to acquire the critical pain and anti-inflammation meds. I only partially succeeded and I'm very frustrated by that. (e:Terry) visited so we could talk about work - we've seen each other in the office two days in the past three weeks. (Really, three weeks??) Our associate (e:ejtower) had a new exciting job fall into his lap and is leaving Monday. We hired a replacement for him and they're hanging in the office transferring knowledge and skills. We're adding a part-time tax person and trying out a part-time admin/data entry person. Crazy growth this year!!

Keeping D's ice machine filled with ice is one of my biggest challenges in this process. The machine has no insulation, which is just idiotic. Very similar to this

It needs refilled about every five hours, which means getting up in the middle of the night to fill it with ice and water. (Ones with insulation like a cooler exist, I don't know why we have this one.) I'm glad there's a bit of snow left because the freezer is full of food, so one of the big bags stayed out in a snowbank last night. Luckily this part only lasts three-four days, although she will need ice as she does her physical therapy exercises for the next several weeks.

My brain is fuzzy from worry, anxiety and lack of sleep and my eyes hurt from crying.

Thanks, (e:tinypliny)! (e:Paul), I certainly hope so. I keep telling her that Tax Day is her goal for being in shape so she can ride with us :-) I have no idea if that's reasonable.

(e:Dianne) will be a new person by summer!

Hang in there, HD!!! You will pull through. My very very best wishes and vibes are with you!

having a romantic dinner at coco before the dead show at the tralf. 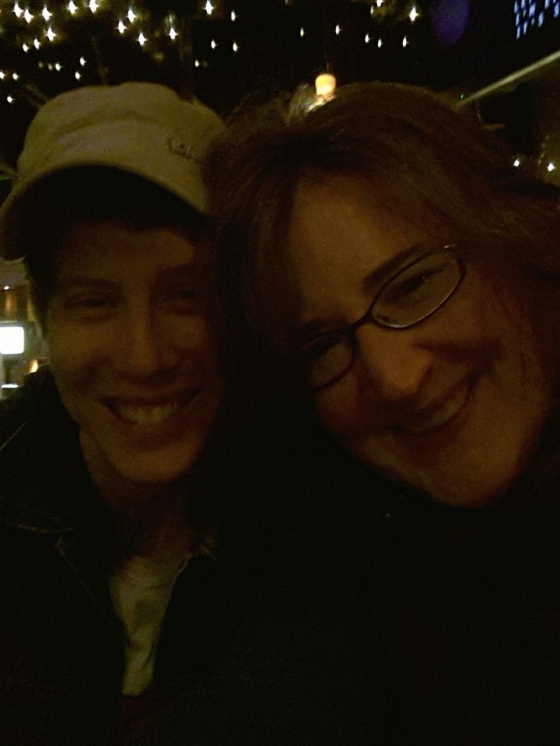 We always have such a great time when we see a dead concert!! I love it's always a date and that I get to dance with you! I LOVE DANCING WITH YOU!! 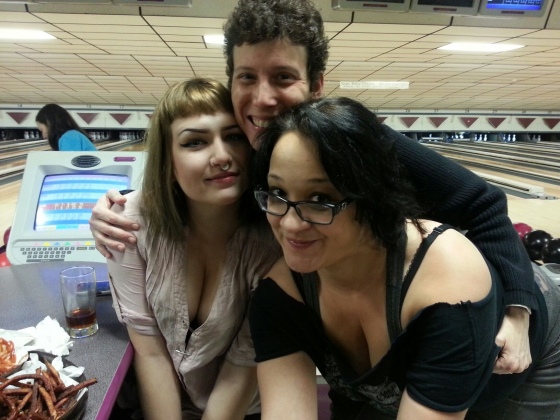 (e:Dianne)'s second shoulder surgery is scheduled for Monday. After a week of being sick and then a blizzard, we're rather behind in our prep work. the apartment is reasonably clean, but we need to do laundry, get the brakes fixed on the truck, go to bloss, go grocery shopping, hit up target, and still have as much fun as possible in the limited time left. if her recovery is like the first surgery, it'll be close to two months before D can drive again, a few weeks before she can shower on her own, and at least a month before she can sleep in bed with me. that's probably the hardest part of it, not sleeping together. I will miss her touch the most. I'm treasuring each time she wraps her arms around me.

the cold and snow will have a significant impact on her independence - she just can't risk falling- and shivering hurts tremendously. hopefully I've prepared her pretty well (new coat, boots, gloves, hats, layers).

it's been a hard month. my beautiful puppy Nisha died, we've had ongoing bad news about D's legal situation, she got into that fight, then a sweet but somewhat lonely Christmas, flu, cancelled new years, blizzard... the wedding was a real joy, as were our couple of game nights (never enough gaming). I cherish our friends and hope that we don't strain those relationships because of our neediness over the coming weeks and months. oh, and for really fun things to look forward to... tax season starts now!

I hope to make the most of the next five days by being present for each precious moment, holding D every chance I get, and dancing wildly Saturday night at the Tralf.

I'm not sure we've ever had normalcy, my love. But we'll figure it out, we're strong. Now get this over with and get in shape so we can play! Can't wait to feel your arms around me again.

You are the light in my world, I'd be so lost without you! This is the final stage to a very long process and by summer we will back to normalcy again! I love you passionately and intensely my love! Also, thank you to all of our friends for the past as well as the next couple of months, I truly love y'all! To my Heidi, I'm sorry for the stress you have and you're going to have with me and thank you ahead of time for loving and taking care of me, you're one in a million my love!

(e:Dianne) was in a car accident last February and broke her left wrist, and screwed up both shoulders. She had surgery on the left one in July. They did a bunch of stuff because it was pretty badly torn up. This one is to repair a partial rotator cuff tear.

Wait why is (e:Diane) have shoulder surgery? Did you have a post about it and I missed it?

More pix from the wedding (e:paul,58511) wrote about. We had a great time and when I sent the bride & groom a thank you note for inviting us, they both said that we were a lot of fun.

It was my first formal event ever and (e:Dianne)'s first tux-wearing opportunity. She looked great, didn't she? The boys looked incredibly handsome. I swooned for all three of them.

Since this was new to all of us, I read up on the details of proper "black tie" attire and the rules are pretty simple: Men must all strictly conform and not stand out; women have a lot of flexibility in what they can wear but sparkly seems to be key. As (e:Terry) observed, "That's very sexist."

The gender role expectations are very strong and so we knew that it would be disruptive that she was wearing a tux... but it kinda wasn't because she completely passed. We weren't really intending that either - D's very happy to be a woman and to be understood as a woman. One young woman had to sit for a moment when she realized that D was a woman... an older man was insistent that she use the men's room and she finally had to explain her gender to him. While we were eating dinner, the man next to D referred to her as "he" a couple times, she got up to take a smoke break, and then someone asked how we knew the bride & groom and each other, so I explained "They are my & Terry's clients, this is Terry my business partner, DIANNE is my fiancee, and Paul is Terry's husband". He continued to refer to Dianne as "he". (Another case of "why did that man's parents name him 'Dianne'?" )

So my thinking for next time we have a black tie event... if women have flexibility in their formal wear, and D won't wear a dress/wants to wear a tux, and we don't want to her to pass as a man... then she can wear a tux and do all the flamboyant things that I wouldn't let (e:Paul) do. She'll have purple suspenders or a vest and lovely purple ascot

or whatever else her sweet heart desires to flag her as female while not violating her butchness.

All in all a very thought-provoking and fun event. 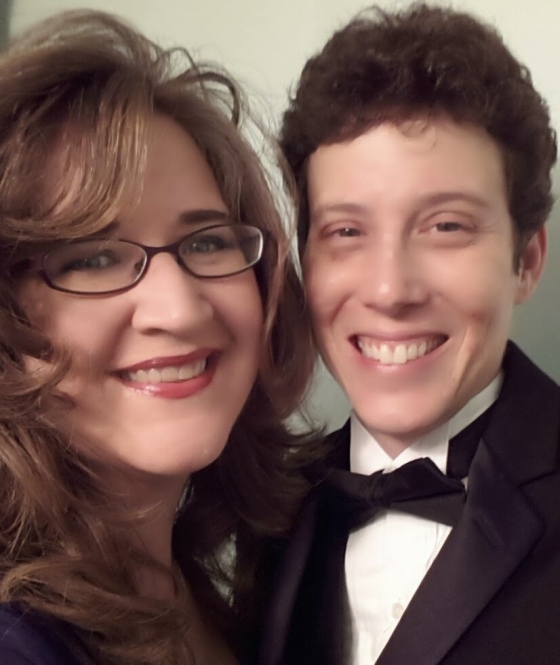 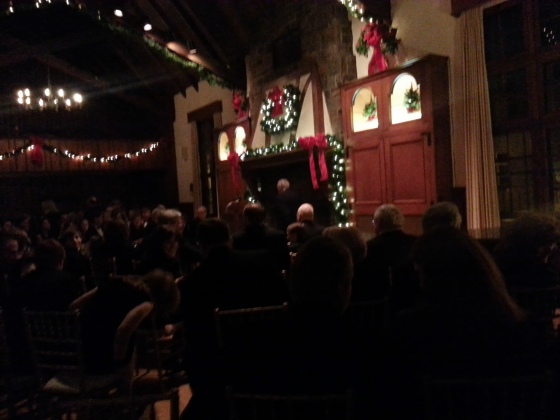 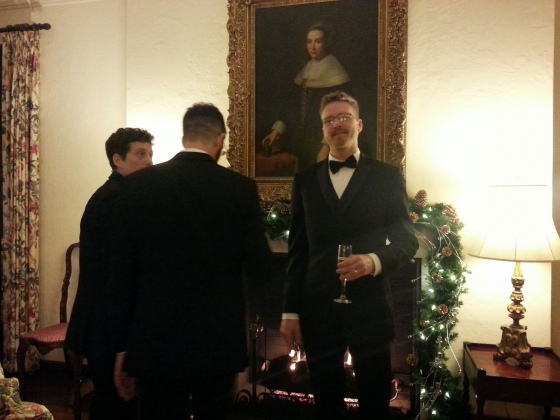 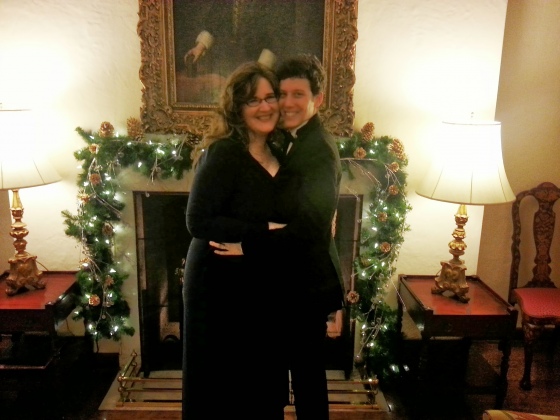 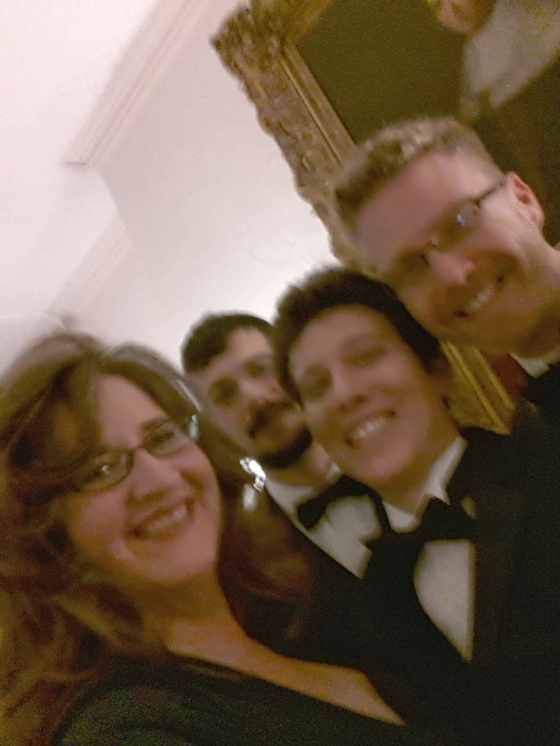 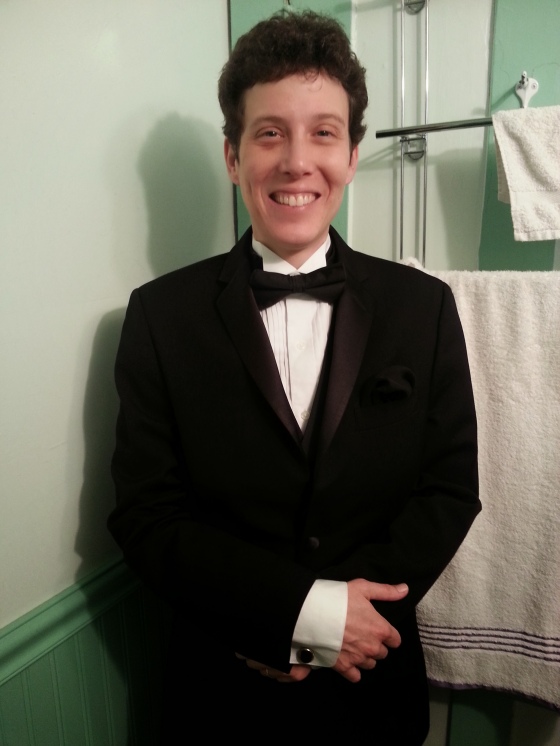 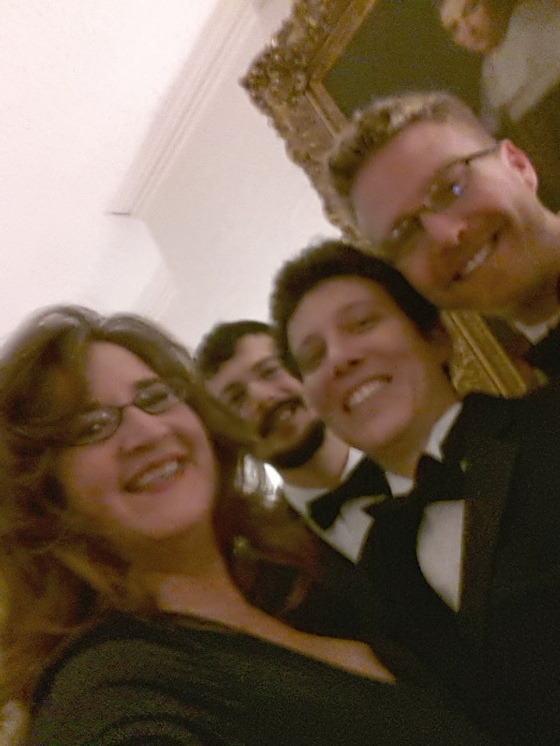 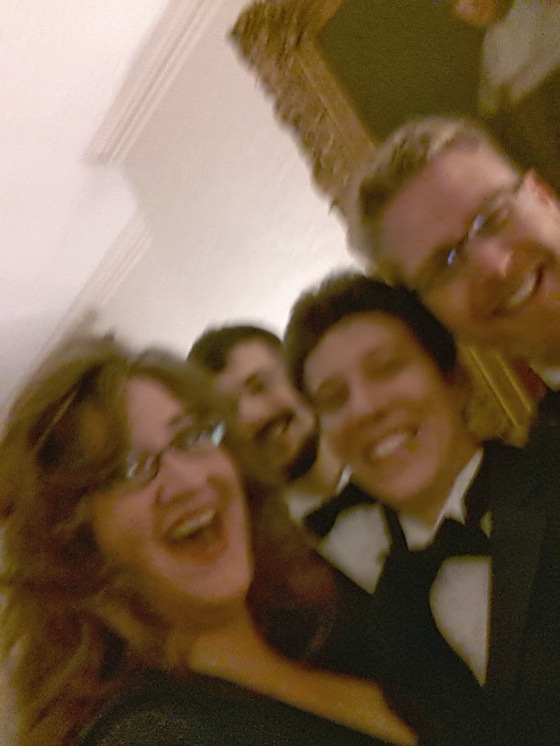 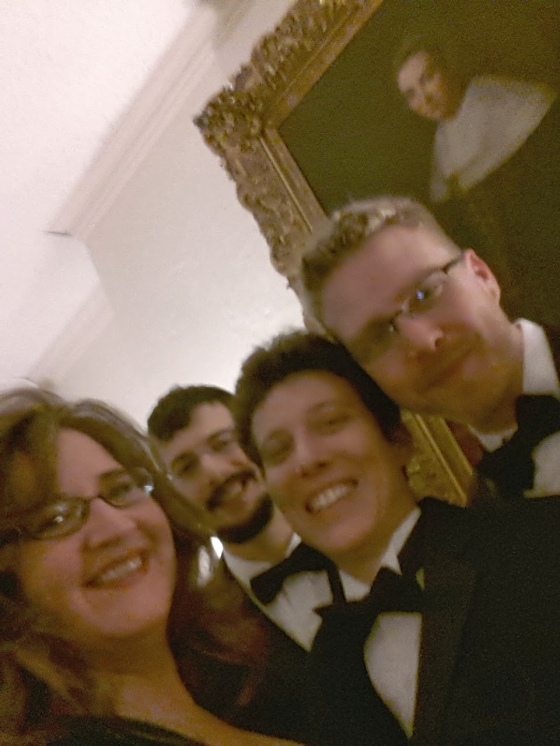 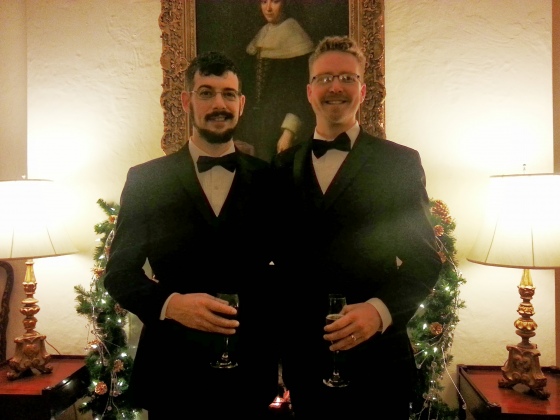 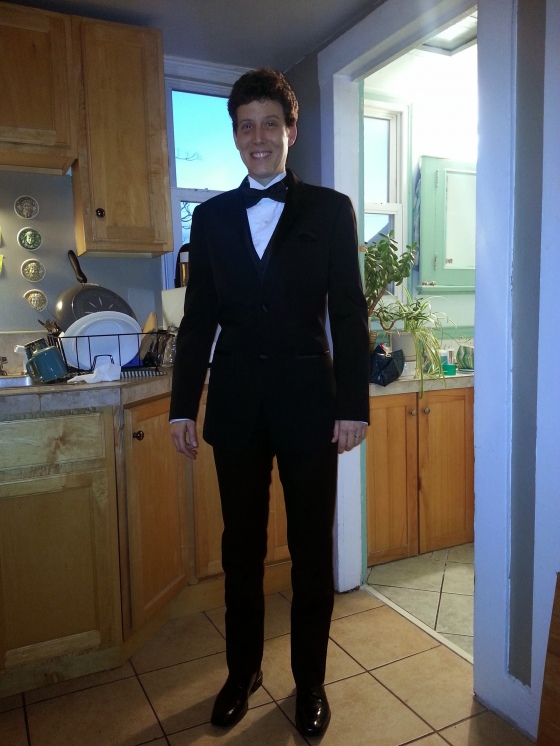 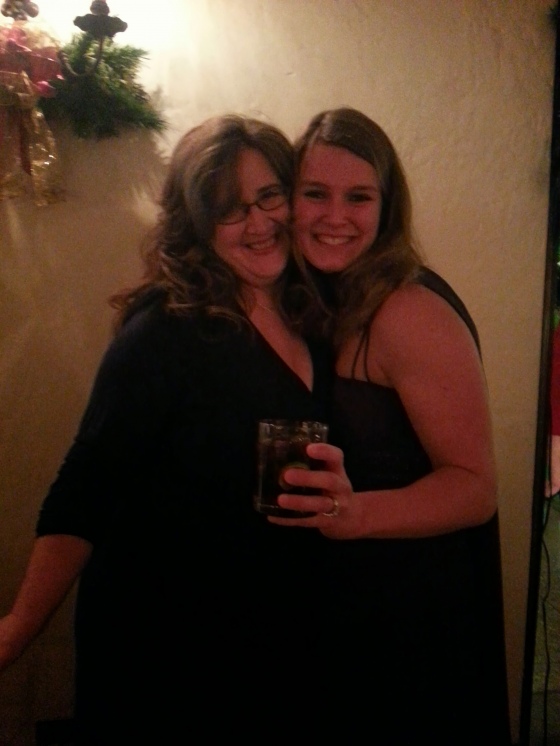 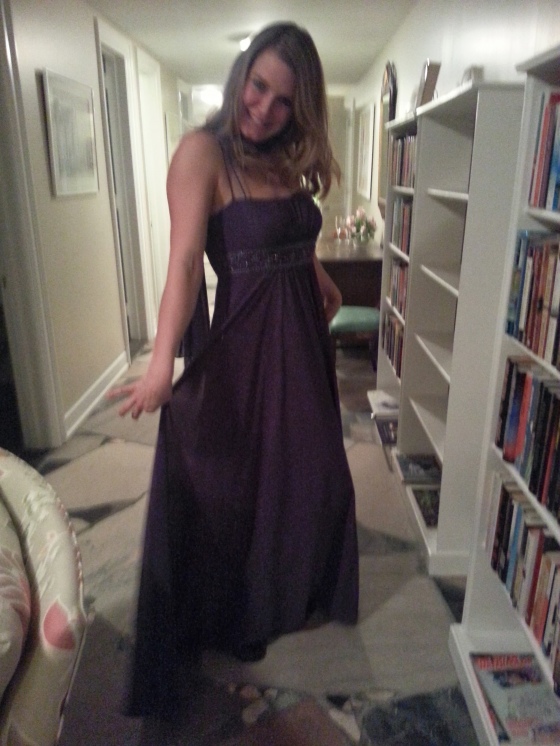 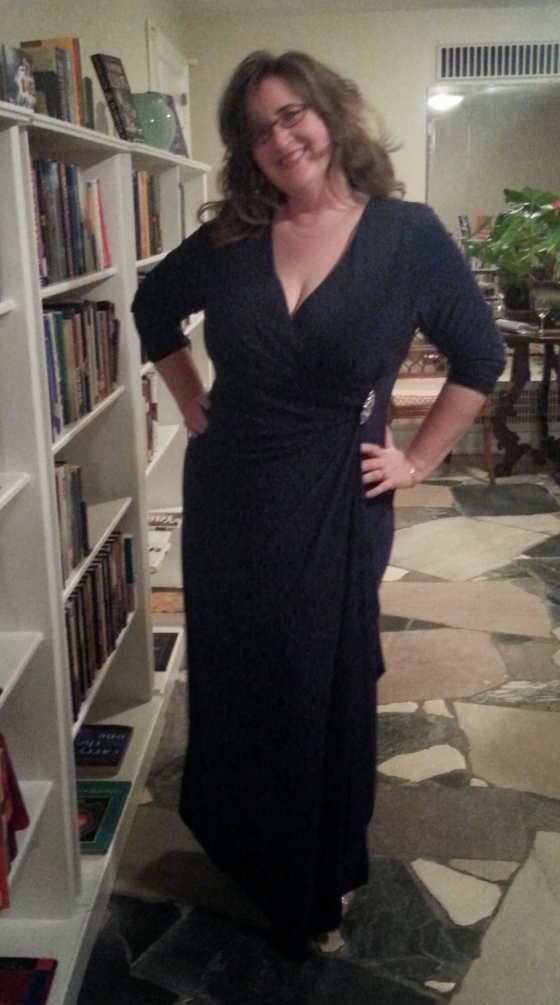 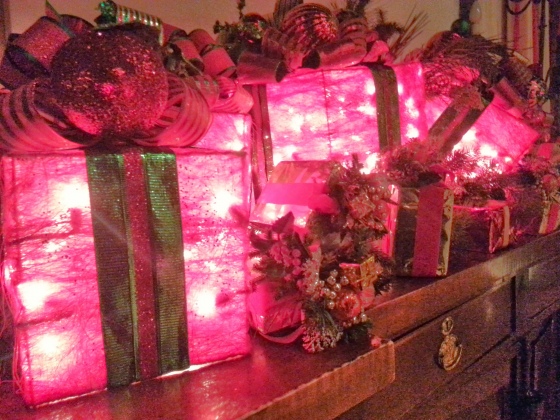