One of the awkward things about inviting (e:Dianne) to participate in (e:strip) is that I'm using to sharing about my life with A and I know that relationship makes her uncomfortable. Her face tenses up and she withdraws just a touch when I mention him. (sigh) I'm gonna continue sharing all the pieces of my crazy life...

I was home briefly Wednesday and Thursday. I got dinner for A, his dad, brother and me and we all hung out in the living room, talked about taxes and family and work, and I had to leave. I think that makes about four hours for the entire month of March that I've spent with him.

My (belated) Valentine's Day present from A. Our friend HokE

blows glass and made these. 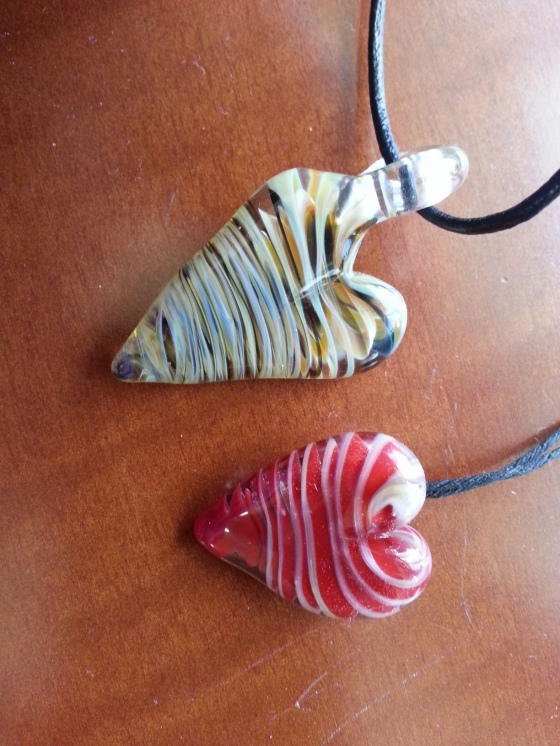 Cuddling on the couch with fuzzy puppy and fuzzy A. 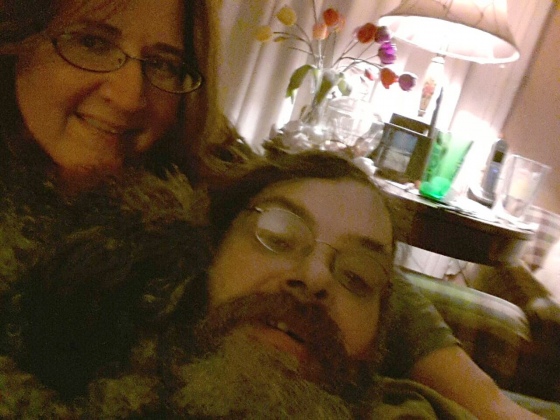 I miss home. I miss Nisha. I miss Jill. I miss hiking and quiet and stars. I'm really hoping the next year will make it easier to balance between.

I am glad we discussed this. I know you miss home and i always want to hear all about it and all of your family stories!! If it makes you smile and happy then i want to share that with you :-)

I'm a born and raised city dweller, but I'd love to know what it's like to have grown up a different way. I feel so connected when I'm out in the country, under the stars... 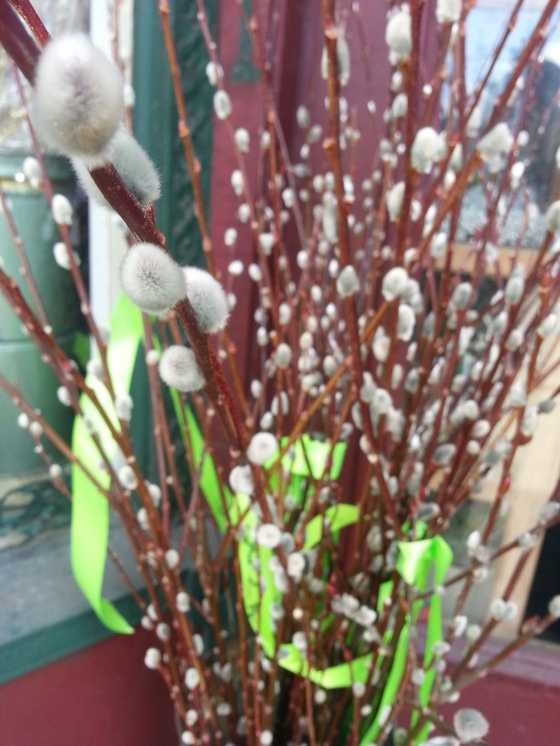 A quick trip to Canada

(e:Dianne) got her enhanced drivers license last week and wanted to visit her first foreign country: CANADA! She wanted to make it a romantic getaway and prevent me from working so she booked us a room (jacuzzi!) at a B&B in Niagara Falls, ON. We showed up at the B&B and there was no one there and it didn't look like anyone had been there for over 24 hours. Uh oh. She called and left a message. We made a quick stop to look at the falls (cold, windy, wet, we didn't stop long) then we went to the shiny tourist area to find some food. We checked every bar/grill and none had a decent beer selection so we went to one with a good pizza selection. The pizza was good - they were great about making a ridiculously custom pizza - half pepperoni, olives and mushrooms, half roasted red pepper, artichoke and zuccini. There was a nice 3/4" gutter between the two sets of toppings. Then we discussed what to do about the no b&B problem, and decided that camping at my house would be preferable to getting a room at the Sheraton or something (all of 24 miles from my house), as long as I kept my phone on airplane mode. We knew there was good beer in my fridge. Then we cruised the actual downtown part of NF looking for the brewpub I had heard of when I went on a photoshoot there (e:heidi,50473) - definitely wanna go there sometime.

(e:Dianne) took pix of the falls, hope she'll post them.

I hadn't informed her what the boarder crossing would be like, what kind of questions to be prepared for, so she was really nervous and the Canadian guard was a little suspicious until she said it was her first time. Then on the way back, she was ready for the questions... and the convo went like this: 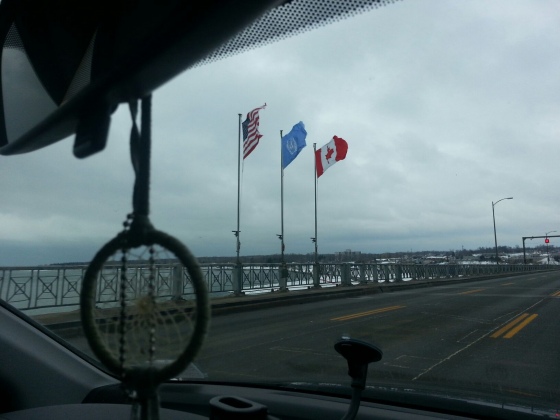 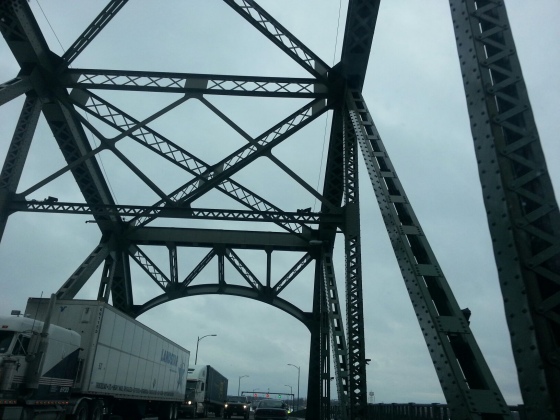 This morning at Taza (I probably should get a coffee maker but I do enjoy going to Taza when she spends the night. She has her own punch card now.) She really liked the Nightmare before Christmas(?) mug she got. 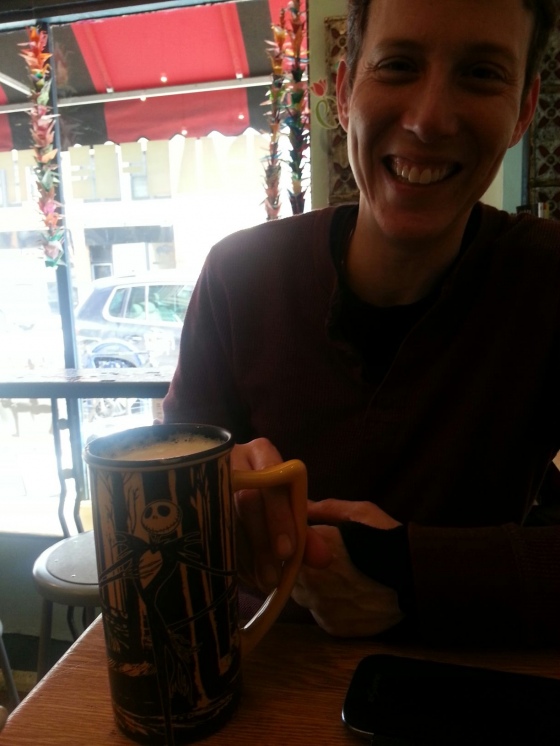 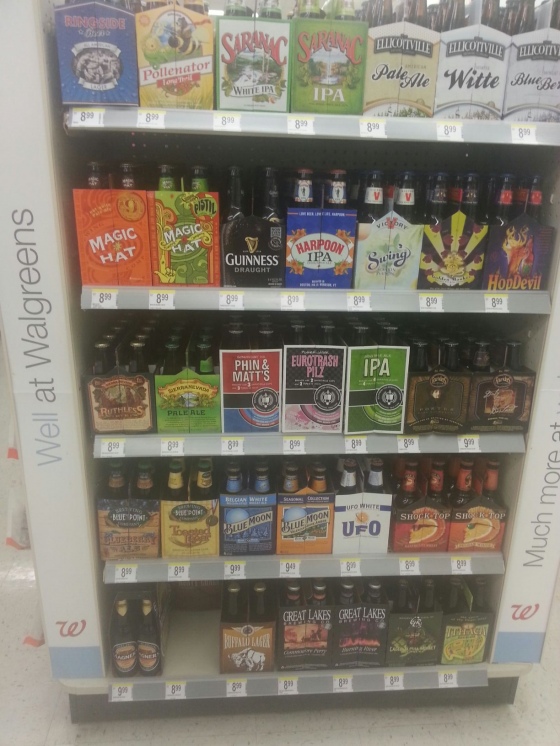 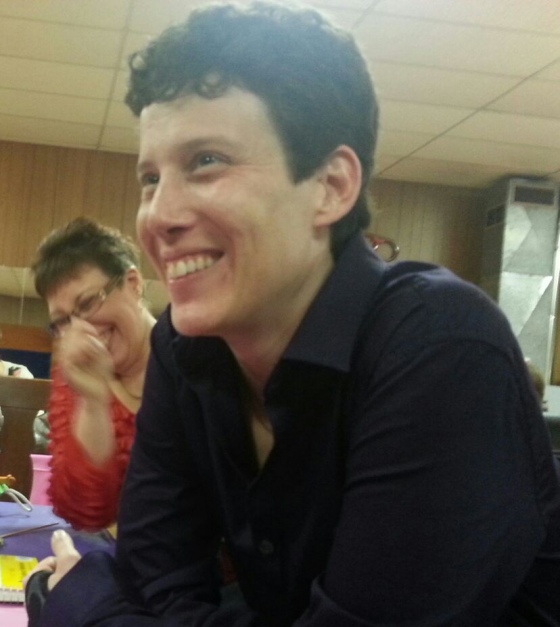 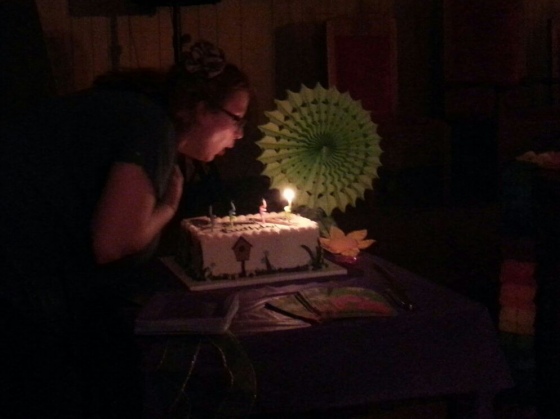 lol!!!! Kristen, (e:puddlediving)'s good friend and hiking buddy. She attended a hallween party at the 24 a couple years ago, maybe a NYE also. It was as the Lewiston Opera House. (e:Dianne) kinda believed we were going to the opera and that she needed to go buy some new clothes. :::link::: (find "opera" on the page)

Who had a abortion.

view from the 12th floor 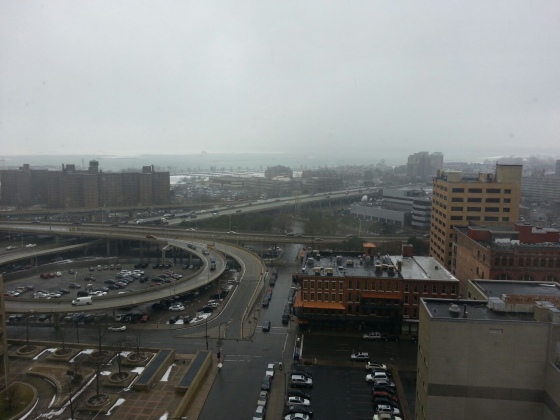 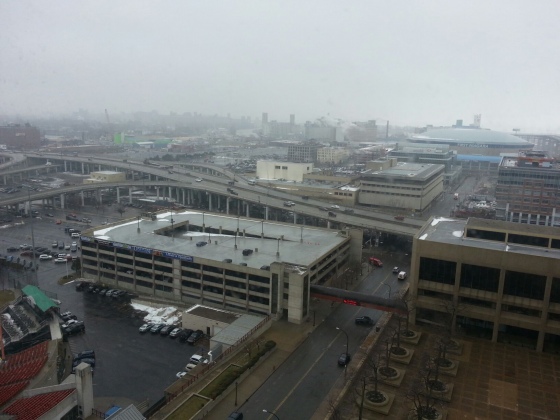 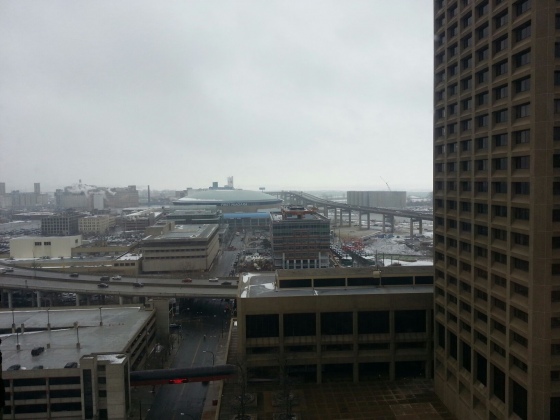 i locked my keys in my truck in the holiday parking lot last week when i was home. i walked down the street to Boro hall where the police department has its office (a windowless room smaller than our office) and asked Josh the cop to open it for me. he let me look at his new suv that the Boro just spent $40k on. sheesh.

Jamie checked out the interesting new clunking noise in the steering column of my truck. 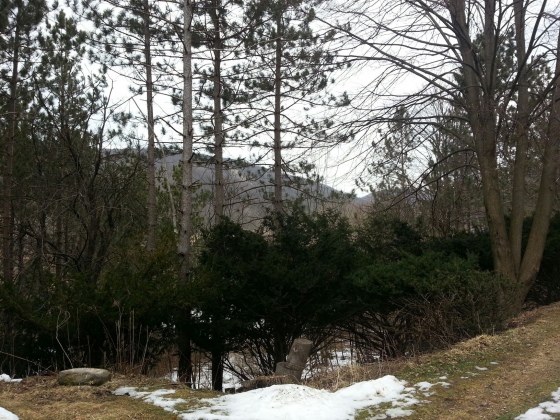 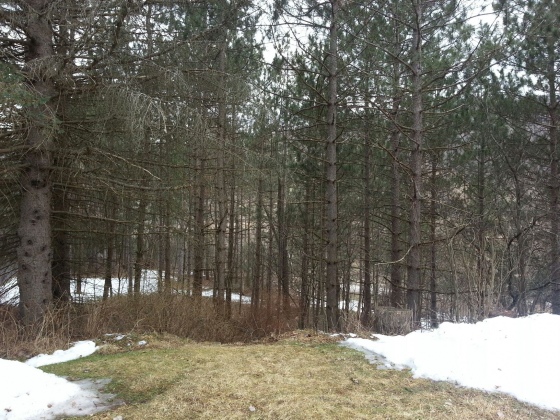 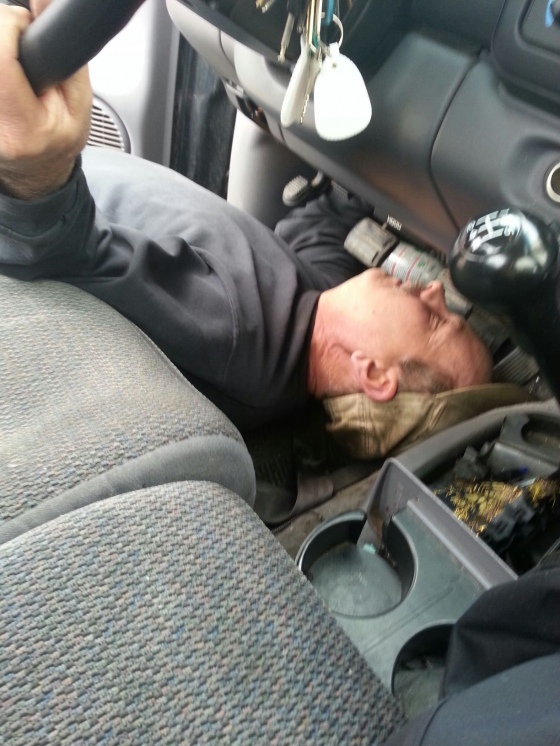 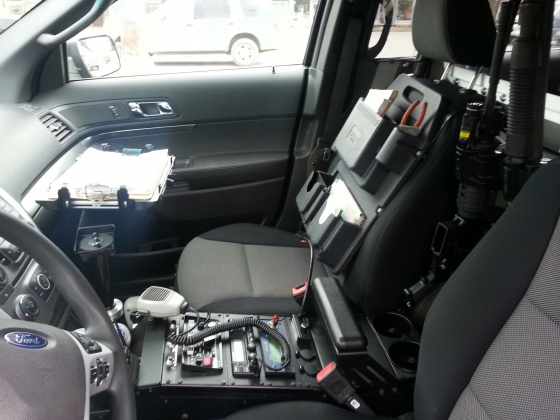 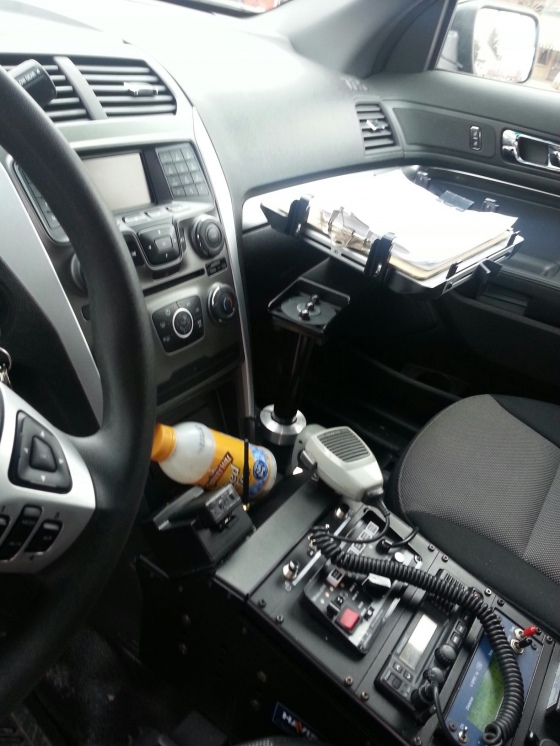 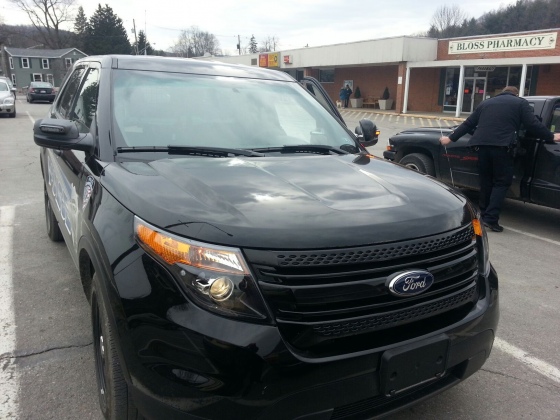 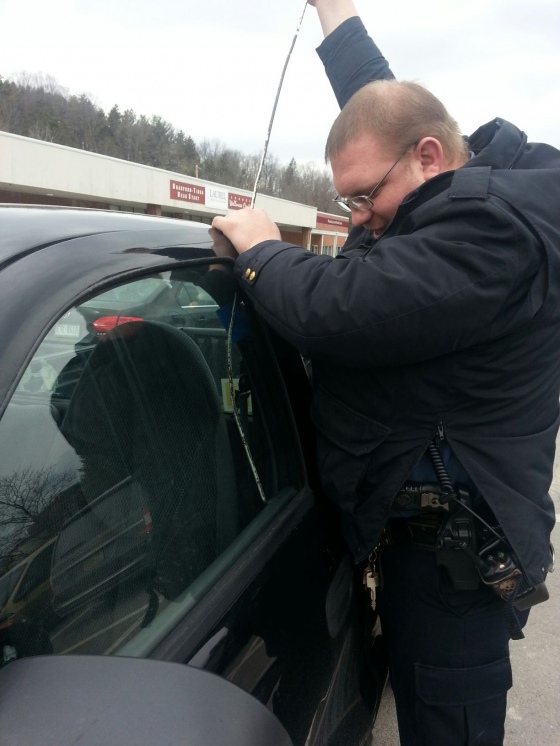 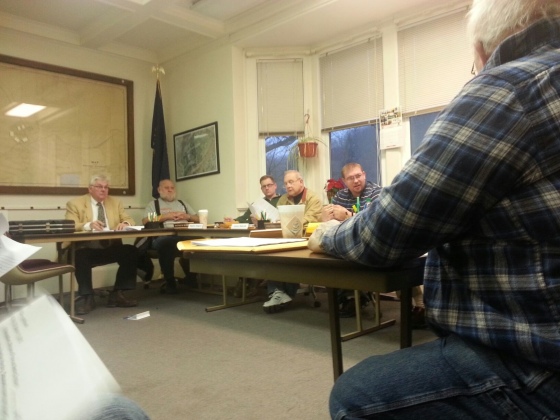 this is the only shot i took Sunday. (e:Dianne) has been spoiling China Cat with treats. it was a wonderful day :-) 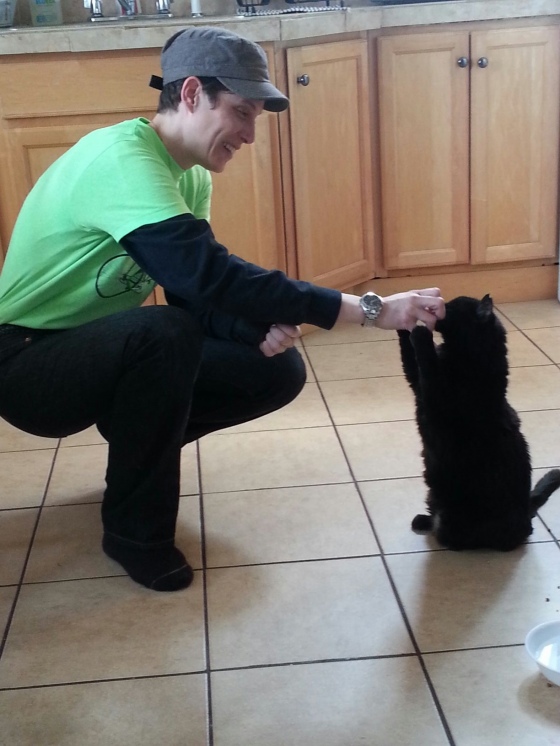 Clearly, I should now be known as Wonder-Wench.

California Widow isn't obsolete! That construction has been updated over time to the current timesuck. 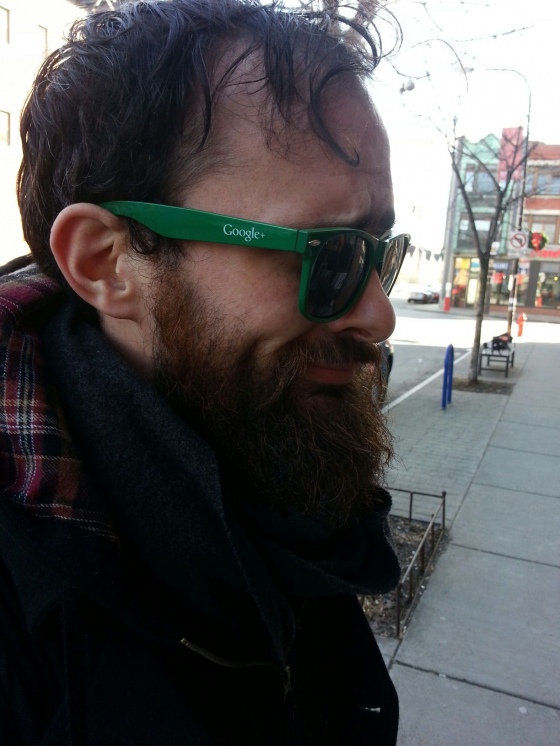 I'm pretty sure I'm the least competitive person in the entire broad gaming circle. I'm mostly interested in making pretty pictures and maybe drinking some beer. However, D is highly competitive and she decided she wanted to place a bet on the outcome of a Qwirkle game. Tsk tsk. I employed several key (e:YesThatCasey) tactics to achieve my goal. 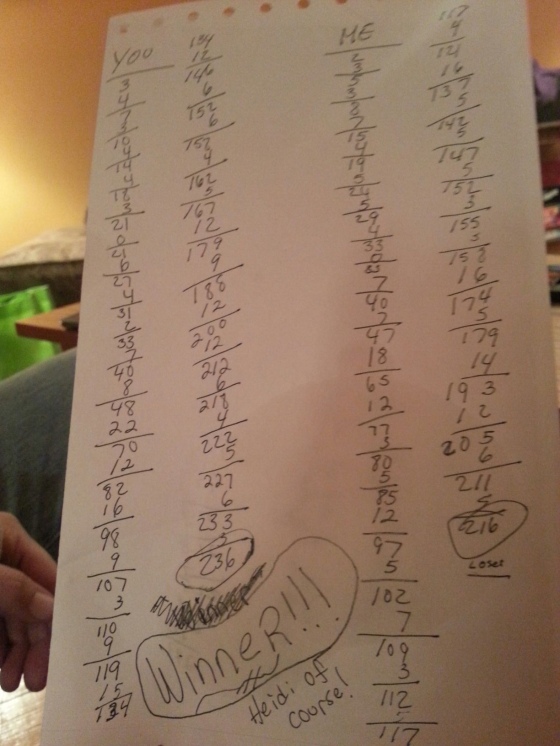 I was brushing my teeth last night and realized there were more toothbrushes and toothpastes than usual. She's had a toothbrush and toothpaste at my house since December... but now needs duplicates? Too cute. We had stopped seeing each other for a bit and I think she might have worried that I threw them out. 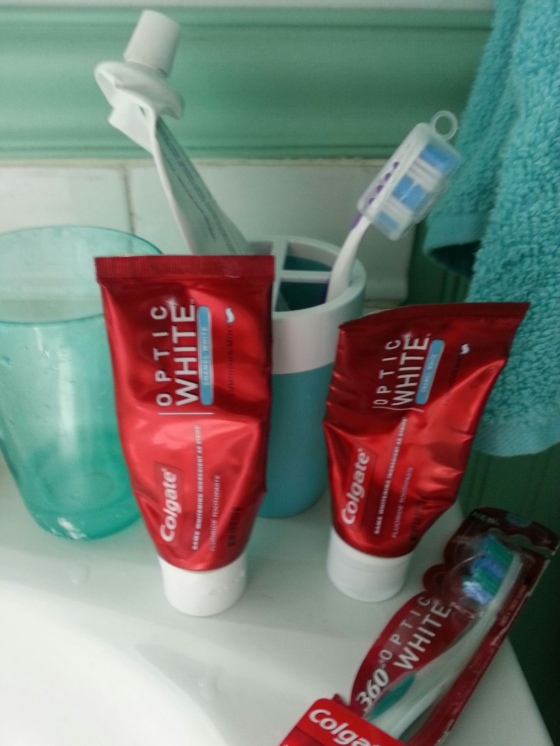 Big Flats is a town between Corning and Elmira, NY, about an hour from home. It's home to the Arnot Mall and the Elmira-Corning Regional Airport. I find it highly amusing that Walgreens sells a beer named for it. 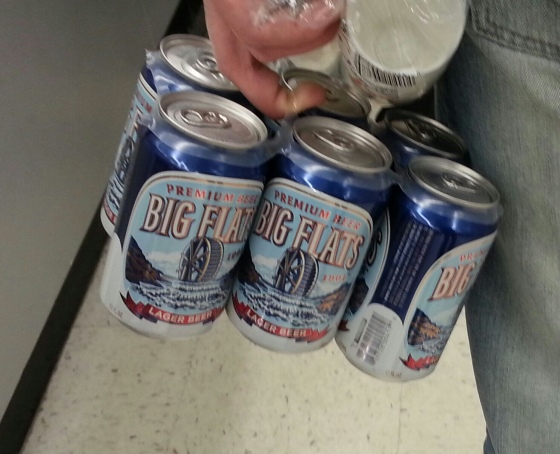 Not a beer fan but how does it taste... You might also like to know 7-Eleven came out with their own beer and heard it was really bad.. Hope big flats is good..

Aw, shucks! I just try to make sure i remember what i think and feel and do, lest i forget one day! Everyone has that side to them, i guess i just let mine hang all out there haha... this was a cute entry!

Not at all, (e:Robert)! I like what you're writing. My writing feels like oversharing for me... your posts are all sweet and emotional and thoughtful.

you tryin' to say i write too much?? haha

I wanna see the end result of the board! :o)