Some time ago (e:Drew) encouraged everyone to write about their hero. There has never been any doubt about who that is for me, but I've hesitated because I feel like nothing I write could ever be good enough. I'm inspired tonight so I want to talk to you about the man who gave me a chance in life - my grandfather Jack Larson.

On June 8th, 1944, at approximately 09:20, when the USS Rich was about 300 yards (300 m) from the minesweeper Staff, which was in the process of taking USS Glennon in tow, a mine exploded 50 yards (50 m) off Rich's starboard beam. This tripped circuit breakers, knocked out the ship's lighting, shook up the ship hard, and knocked sailors off their feet, but caused no structural damage.

Three minutes later, a second mine went off directly under the ship. Approximately 50 feet of her stern was blown off, from frame 130 aft, just aft of the 1.1-inch mount in 'X' position. Even though the blown-off stern section caught fire, survivors clung to her wreckage, and it sank shortly afterward.

A third mine, another influence mine, exploded below the ice machine room forward, delivering the final blow 2 minutes later. The forward section was totally wrecked, the flying bridge demolished, and forward fire room severely damaged, and the mast came crashing down. Life rafts were ordered cut loose, and Rich was ordered abandoned. A few minutes later, she sank. Of her crew, 27 were killed, 73 wounded, and 62 missing; in all, 91 were killed outright or died of wounds following their rescue. Rich was the only American destroyer escort lost in the invasion force.

I've spent countless hours wondering what went through his mind when the Rich was destroyed. You're 18 years old, disoriented, many of your friends are dying or dead, you are blown off of your ship, you see a floating hand with a ring, you wonder if your time has come.

Jack bore the scars of the war for his entire life, his back littered with shrapnel wounds and gouges in his flesh, but he also learned the traits that earned his generation the title "Greatest". Having come from a very, very poor family in Pennsylvania, and going through this experience, he had a strong sense of family, of sacrifice, of loving your neighbor and community, things that were the products of hardship and shared suffering.

One of the things I admired most about Grampa was his work ethic. I'll never forget the early mornings, the metal lunch pail, the smell of coffee, the thermos, the simple eggs and toast (he liked the eggs with lots of pepper). He was a millwright, a proud Union blue collar man who worked himself to the bone for over 35 years, getting up early every day to give his family the best life he could provide. When he was away from work he always had to be working on something outdoors. I used to joke that he would rake the sidewalk if it meant he could be productive. In his old age he would volunteer at WCA hospital, serving meals and pushing wheelchairs.

The most precious thing in life to Jack Larson was his family. Although he already had done a great job raising sons of his own, his work ethic, the sense of sacrifice, and something I can only describe as unconditional love led him and my grandmother to take in two babies whose mother had left them. I can't imagine being in your fifties and starting the parenting process over again from scratch. You're near retirement, you've done enough already, and this is the time you are supposed to enjoy the fruits of your labor. No, not for Jack, he never got the ride into the sunset. There was more to do.

So in a way Jack became a father again. I had the best childhood a kid could ever ask for, something that may never have come if not for his generosity. Favorite memories of mine are the times on the weekend when he would bring sweets from Ecklof's Bakery for us to eat while we watched Sesame Street, and when he would deputize us, driving us around to help take care of the falling leaves and brush. Josh and I were the happiest kids in the world. If we weren't laughing we were sleeping. It took me so many years to realize we weren't a burden, but instead his greatest joy.

How do you thank someone for sacrificing their golden years to give you a decent shot at life? It hit me during my freshman year at UB that my grandparents wouldn't be around forever. You can call them at the moment, you can thank someone, you can tell them you love them, but there isn't anything you can do to justify your position, something that makes you thankful but also fills you with grief at times.

Jack was a tough son of a bitch. He suffered through diabetes, lieukemia and heart disease. When he was dying I remember sitting down and looking into his eyes. Jesus Christ, nobody deserved to suffer less than him. His eyes were yellow, lifeless, and I started thinking about whether he could see or hear or understand. You start thinking about the supernatural. This was the first real loss I ever had to come to terms with. I had a girlfriend at the time that I loved dearly, I had a great job, and he saw me happy which I hope comforted him. I held it together until during the funeral when the military people brought his flag, after which I cried until I couldn't breathe. Things had come full circle.

I think I've learned that the only way to justify your existence, and the way to thank someone like this is to not waste the opportunity you've been given. During my Blue Period, when I couldn't (wouldn't) get off the couch I remember looking at the flag from his grave, the only material possession I care about. You CANNOT throw away something that someone else worked himself to death to achieve. He saved me after death. He lives on through me, and anything good I can say about myself comes from his example.

If you are willing to extend your hand, and if you can sacrifice part of yourself, not even everything like Jack Larson did, you can impact someone far greater than you realize. If I end up being a fraction of the man my grandfather was, I think I'll be a fine man indeed. 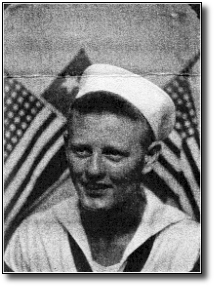 This was a wonderful tribute to your grandfather, he sounded like he was an amazing man.

That was really nice. Your words and the picture you formed have been very moving.

That was a beautiful tribute (I shouldn't have read it at work because now everyone is wondering why I'm teary at my desk).

I'm pretty cynical when it comes to the concept of heros, but you might have changed my mind!

I'm coming to the realization it is more likely than not we will have an honest to God left winger in the White House, but mercifully the stages of grief are rolling by. I remember in 2004 (e:Terry) wrote a post saying essentially, "Well, the country voted for him" and trying his best to come to terms with things and move on. So, I'm going to do the same. Besides, this time I didn't feel I was choosing between the lesser of two evils. I don't love either guy but I don't hate them either.

Honestly if I were voting with my heart I would have voted for Senator Obama tonight. Up until the moment I entered the booth my heart was leading me to Obama. There are a number of things I absolutely love about him. His family situation was similar to mine. Josh and I were raised by a single parent, with the help of Grandparents. I understand very well the relationship he had with his Grandmother. I also like that he turned his unorthodox family situation into a desire to be a great father and husband someday, and he is a great family man. His heart is in the right place, and I think he will represent us well. After all, our superficial allies liking us is worthless unless it gains us something tangible. To this end I think he can be really effective.

In the end, the things I love about him have almost nothing to do with his job as US President. Anyway, what I'm really nervous about is the Senate outcome. A left wing supermajority would be a disaster with some of the most partisan and foolish Congressional leaders I can remember in charge. I'm praying America doesn't overreact. If they don't overreact we'll be fine. We won't be unified, we will still be as divided as ever, but we'll be able to live through what is going to be a very difficult Presidency no matter who wins the race. I know I don't want that job.

I thought I would share a Palin joke I heard since sexism is funny, in certain cases of course. Obama supporters will love this one.

Q: What is the difference between Palin's mouth and her vagina?

A: What comes out of Palin's vagina is retarded only HALF the time.

Bada boom. Jokes like that make me laugh and cringe at the same time.

Well, it had better be a good Monday considering how Sunday went. The Bills lost and my FFL team is less than a point away from taking a 5th loss. Not the worst day in the world, I know, but I sat there for hours watching and got no payoff.

By the way, it was nice to see everyone at the party on Friday. Special greetings go out to (e:DCoffee) and (e:MMTornow) who I met for the first time. It's weird sometimes how you can recognize people in the neighborhood yet never actually meet for a while. It was also nice to see a fetching (e:Jenks) again - sorry about not getting your outfit!

Obviously, we select our next President tomorrow. At first when (e:Drew) told me he expected an Obama landslide I scoffed, but it looks like he may very well get his wish in at least one metric. People have been suggesting riots no matter who wins, so I'm locking myself in the apartment with a bottle of St. Bernardus - and no you can't have any.