I made a trip to Beers of the World in Rochester this Saturday in an effort to find the Pannepot, as well as some others such as the Fantome Saison and the Dark Lord Imperial Stout. Sadly the store had nothing on my list, which tells me some of the best must be available only regionally, or in the case of some of the European ales only once in a while. It's hard to know when you can get some of this stuff.

Anyway, I found this beaut at the store and it is (according to Beer Advocate) the #5 Saison style beer the world, the "Avec les Bon Voeux de la Brasserie Dupont" which more than fit the bill. I like Saison Dupont but this is much, much better. Fizzy, hoppy, spicy, light on the palatte....a perfect spring/summer brew that doesn't hit you like a sledgehammer as did the Old Rasputin Russian Imperial Stout. 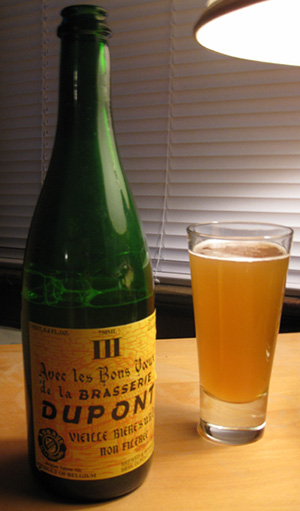 By the way....if you happen to be in the hood and in the mood for some good beer, Beers of the World has a good selection and the prices are far lower than what I normally pay here for booze of equal caliber. I also got a Chimay goblet, something I've wanted for a bit.

I remain painfully frustrated by my inability to find this beer, the Pannepot Old Fisherman's Ale. At this rate, I'm going to taste the Westvleteren 12 before I try the Pannepot. Everything I've read about this beer leads me to believe I'm going to love it. 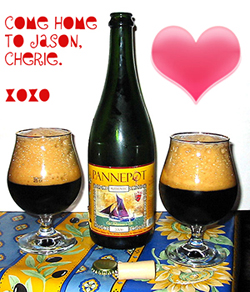 Don't feel too badly for me. I'm still spoiled, trust me. Seriously though, if anyone ever sees this please let me know immediately. Preferably via e-mail. I spotted a wife at Premier Gourmet last weekend looking for it on behalf of her husband. I might have snatched it out of her hands if she did find it. Just joking....sort of. 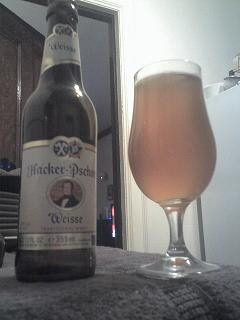 I have been waiting quite a while to try this one. It seems to be hard to find at any of the local beer stores, but today we found some at the beer boutique down the street.

Mmmmm......a pretty good wheat beer. I know I've spoken with a couple of you about this. Get it while you can!

Buying beer from the owner/brewer of the brewery is a unique experience, something that felt quite satisfying. I like shaking the hand of the man who made my beer. I am definitely going to make a point of it to buy beer at the Flying Bison Brewery again in the future. I bought a 5 gallon mini-keg, I have a shitload of this Blizzard Bock left, and I have to say it is fucking awesome. I don't know why I haven't seen this at local stores before. Anyone seen it?