People Who Annoy Me

It's been a while, and my rants aren't as caliente as they once were. Once in a while Jerry's fiance will make a remark concerning how mellow and even tempered I am. Some may confuse this with being dispassionate. I don't have a certain Swede's hair trigger temper but I still do get pissed off like everyone else. I'm not a saint.

I may have spit on a waitress last night at Fat Bob's. Totally by accident, of course, I'm not an asshole, but I've been getting over this Chronchitis, bringing up phlegm and snot and have had to get it out of my body. We were outside, and I tried to be courteous and dip my head around the corner when getting the shit out of my system yesterday, and sure enough this waitress comes barreling through. She got a little spittle on her leg or something. Let me tell you from experience, no apology is going to satisfy someone in her situation.

I was horrified that she got a lil contact, but I can't feel bad about doing something that is more or less involuntary when you're getting over an illness. I tried my best to apologize, I really did, but she insisted on being a bitch the rest of the evening. Came round and said how disgusting it was. Came around again and called me and my friends pigs. My friends didn't have a fucking thing to do with it!! I don't know her name, but if I did I would publicly call her out. This prickly little tart couldn't accept my apology and move on with life. You know what? Fuck off. The guy thing to do is to say you need some dick in your life. One of my pals ended up getting sick of her and telling her off, which resulted in us moving on to Colter Bay. Next time I see her I'm going to ask her out.

Next - one of my pet peeves is passive aggressive insulting. By pet peeve I mean it makes me very angry. You know what I mean - the kind of bullshit that makes you think "Is this guy actually trying to break my balls?" For some reason or another, people think they're so goddamned smart that as long as they attempt to mask their insult nobody will be able to figure it out. Michael George Hake is one of these people. Yes, pat yourself on the back again, numbskull, and bask in your glory. This is the kind of person who yells their own name while beating off. Michael George Hake, let me give you a piece of advice. Stop being a passive aggressive pussy and say what you mean if you want to insult someone. I didn't find your "joke" funny at all. You don't know me, and don't know the Jasonisms. And Josh actually apologized to him for tearing him an ass! Fuck's sake! I'm gonna remember that, Joshy.

Lastly - Al Franken. I suppose for most people this is "Nuff said" but I look forward to one of the most hateful and bitter people in the world making clowns out of the people who voted him into office. For the life of me I can't figure out what would compel anyone to vote for that guy. It's astonishing. It's like a boozed up Michael Savage getting the confidence of the electorate. I don't think they're mentally fit. The guy in interviews is trying to make himself look like a scholar, JFC it is absolutely revolting. He walks the earth while the blessed Billy Mays is tits up. I am going to get a ton of mileage out of that asshole, so I guess that's the silver lining.

What Kind of Bird Is This?

On my recent golf vacation in Florida, we saw these birds roaming the course. I don't know anything about birds, but some of you know plenty. What kind of bird is this, and why is it so comfy on the tee box? 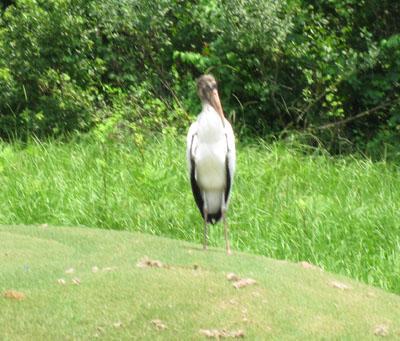 Well, yesterday was my 3rd sick day this year. The diagnosis was Acute Bronchitis, and they gave me a nuclear antibiotic and an inhaler, as I had been complaining about difficulty breathing.

It really wasn't much fun. I got about 9 hours of sleep, but when I drove Josh to work, then back home, honest to God I could have just collapsed on the couch again. I was exhausted just walking from the car to the door. Then I had to jump right out again and get to the doctor's office ("Can you be here in 15 minutes?").

But I pretty much rested the whole afternoon and the whole evening, kept up my regimen of drugs and puffs on the inhaler. Watched a little bit of Patton which lifted the spirits. I got a good night's sleep last night again and this morning I think I'm a little better.

I'd like to be more or less fully functional by tomorrow, because I've gotta help Jerry do some moving into his fiance's place, and then our buddy Joe's girlfriend into Joe's place. There best be booze involved because this week has been about the cleanest living week I've had in a bit. Heh.

Jeez, I get home for two freaking days and I'm sick already? Cough, runny nose, chest congestion, weird body aches? What the hell. I hate being at work like this but I felt more or less okay this morning when I got out of bed.

Looks like tonight is a movie night, along with meds and some fluids. I've looked to see if I have H1N1 symptoms, and I guess I do, but it seems like a lot of the symptoms are the same as any other cough or flu. I'm gonna tough it out tonight, get some rest, and see how I feel in the morning. I don't want to see a doctor.

Ugh. It's tough to lay down to sleep and tough to take a shower (feels like a million little needles). My nose and cheeks are also pretty red. The rest of me is pretty much in peak condition.

Of course with these difficulties a guy needs a martini on a Monday. So the other day we went, and of course had some drama with an older lady who felt she was the only one waiting for a table. We'd been waiting since 5:45. I hate this me-centric attitude suburbanites possess. Obviously I wasn't trying to hear her shit, and wasn't about to give up my table. My Metropolitan tasted even better garnished with her tears. Picture my smile. Seriously guys, fuck that and fuck that again.

Speaking of cocktails, I do believe it's finally summer cocktail season y'all, so I've got dreams of gin in my head for a new summer drink. I also have to think up some N/A alternatives for my friend Andrea who's visiting soon with her husband, my former college roommate Walt. Apparently he slipped one by the goalie so she can't booze it for a bit.

Thank You Ride For Roswell

When I got home today I found a little pamphlet saying a bicycle race will be happening in my neighborhood next weekend, in addition to providing a map of the route.

That's what I'm talking about!! THANK YOU from a resident.

You see, as much as I can hate on the inconsiderate bastards that constitute most of these race organizers, I am going to love me some Roswell. Kudos

My Vacation So Far

Anyone know of a "Scandinavian Strength" sunblock? Heh.

Tonight we are going to some watering holes by the beach. I love that stuff! Walk right out of the bar onto the beach? C'mon.

Vacation is time to reflect, relax, not worry about your day to day, and think about what you want most. I think I have identified one thing I want that I don't have, but I'm not gonna say what.

Overall, good stuff! But it's 100 degrees and it takes some getting used to.

I wish I could have met you, David Carradine, smoked Asia's finest, told jokes, and drank tea. I never cared what kind of freaky ass, questionable sexual behavior you enjoyed. Rest in peace.

Something I read in the Buffalo News from a reader caught my attention regarding Public Employee benefits. Is it really true that the income public retirees draw from isn't taxed by NYS? Governments are experts at double and triple dipping, so it seems bizarre to me.

Let's talk briefly about the idea of taxpayers covering the losses of the public employee pension system. My own retirement account took a hit, as did the accounts of my father and grandmother. Now my Uncle, who is a retired teacher, his pension is "insured" as he calls it.

I don't like the idea of people who are suffering under oppressive taxes already, and who have their own retirements obliterated, mitigating the losses of what the government has deemed to be a preferred class of people. My uncle would say "A contract is a contract!" but recently I've come to learn the Chief Exec can just rip a contract up and piss on it. So, let it fly, fresh and stinky.

These brickheads in Albany never learn. Keep on taxing, keep on spending, watch jobs and people run away from us as fast as possible. Quick count of hands - how many people think if we only tax and spend some more, and bury ourselves in debt, that things might just work this time? I'll be voting with my feet.

What an uncomfortable question to ponder, given the logical hoops people jump through vis a vis the GWOT. I think a hardened pro-abort person would be severely pissed off if I cheekily asked them this question.

Here's a thought that makes some Christian Conservatives seethe: What if the guy was honestly in church to repent and try to make things right with God? Nobody is beyond redemption.

If you were to ask me, I would say that policy is not, in and of itself, responsible for some nutter, or group of nutters, committing evil acts. To me that is a simplistic answer that ignores human nature. We are corrupt, capitalizing on any opportunity to do our fellow man wrong. I would love for the historical evidence to paint a different picture.

It is a really fucked up thing to think about, though - what if abortion were illegal? Would Dr. Tiller would be alive today? I say yes. But what does that say about the policy? Is the policy responsible? I don't think so. Complex questions don't deserve simple, talking-points-memo-esque answers.