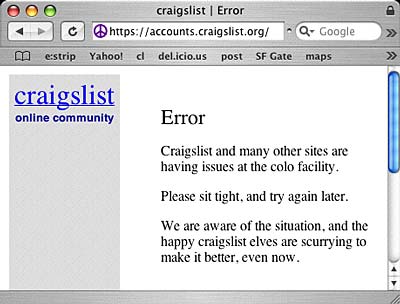 How are you surviving?

Persistence paid off! I found a seller with one Tegan and Sara ticket at face value plus fees. Her original buyer flaked out, so I'm going to see them tonight! Yay!

Fuzzy Wuzzy was a Bear...

Sorry kids, I have no tales of alleged depravity to tell. Despite the advance disclosures piquing my (e:twisted,40182) interest, I couldn't bring myself to ask the guy sitting across from me for specifics. At least not at Starbucks over a Tazo tea. Although I'm sure the Market and 10th Street crowd has heard it all.

He did give me a golden opportunity when he asked if there was anything else I'd like to ask him. Since he had wisely ignored the question when I asked it by email, I decided to do the same and instead referred back to the only other question I had asked. Yes, he does have a grill. But it's inconveniently located in Oakland, NOT Hayes Valley as one would assume from the location indicated by his post. (I really hate that. But at least he works near Hayes Valley, so I let him get away with it.)

Anyway -- long story short -- I don't see myself traipsing over to Oakland for an impromptu BBQ. (Or taking him up on his offer to bring his grill to me. If I had a place to grill, I'd get my old grill back. But right now, the only feasible grilling spot would almost certainly set the house on fire. And I didn't go through hell to get the place the way I want it to burn it down.)

I also don't see myself exploring whatever his perception of "strange ways" might be. There's just no attraction there. And he didn't strike me as someone who would have much to elaborate on the topic. (Although as he put it in his email this morning, "do psychopaths ever look like one?" True enough! Whatever that means.)

Now, I know what you're thinking (or would be thinking if you had read his whole post). How did I distill his heart-wrenchingly epic self-portrait down to those two questions? I admit it, I'm a woman of simple needs. And right now one of those needs is grilled meat. You have no idea how far that could get you.

I do have my limits though. Ok, maybe I let my imagination run away with me, especially since his post was extremely tame by craigslist standards. But when I got the reply back from "nursemalenurse@somewhere.non," my first thought was naturally, "oh, he's a male nurse." THEN I started thinking, wait a minute. Maybe he just likes to impersonate a male nurse. Or impersonate a male impersonating a female nurse. Or maybe he's a male who likes to nurse. Or maybe male nurse is code for something I never even dreamed of. Yeah, that's probably it.

Well, turns out he is indeed a male nurse (rehab and detox). Don't know about any of the other stuff, but as you can imagine, from there it was a short jump to all kinds of other possible conclusions hidden between the lines. As I've written before, I'm not big on [inlink]twisted,36385[/inlink] labels, so clues like that are likely to go right over my head. I may have overcompensated in this case, though. Still, as much as I love animals, if you're looking for a partner in bestiality, I'm not the girl for you. That much I know for sure. (What you do on your own time with a consenting animal is your own business, though.)

Back to the posting board!

This is an example of how the female mind works when talking about guys - too much analysis! Dr. Josh is diagnosing you with a mild case of jenksitis. =)

So I go away for two weeks and TOTALLY miss out on a couple great bands because the tickets went on sale sold out before I got back! That is so wrong! I can usually count on my music buds to cover for me, but apparently nobody else cared about seeing Shout Out Louds or Tegan and Sara. How is that possible? I literally found out about SOL the day of the show, and tried to get same day tickets at the Rickshaw Stop (literally five blocks from my house) Wednesday night, but no luck. Meanwhile, a smattering of Tegan and Sara tickets are going for $90 on CL. Too rich for my blood. Oh well, at least I can catch their free in store set at Virgin on Saturday.

In other news, if a craigslist post mentions "I have some sexual preferences that some people may not be able to handle. I want sex several strange ways. Please be comfortable with such." And ends with "P.S.-- Please be an animal lover. If you are not, then I am not the man for you." That...doesn't....mean.......??? Nah!

oh shit- are you going out with my ex?

I reckon your craiglist guy might be a furry,

oh hell, I just snorted, thank you! I thought the sexual thing was intriguing until his "must be an animal lover" follow up. Oh damn, I need to know how your um, outing goes. Details lady, details!

First things first. Saw a recipe for Wheatless Apricot Cake in an

article about cooking with solar power and thought of (e:Matthew). Could taste like crap, but sounds like it's hot enough there to bake one in record time. Keep it handy for those rolling blackouts.

Re: title. Took a break from unpacking to check out the band I'm going to see tonight. Since all research eventually leads to wikipedia, I learned they are "one of the isolated acts being referred to as

'New Rave.'" Which is a helluva lot catchier than HMV's description of 'acid-rave sci-fi punk-funk' (make up your fricken' minds already).

All of my crap [inlink]twisted,36773[/inlink] arrived yesterday, and as expected, didn't all fit in my new place. I took advantage of having the storage pods for a day to stage the world's most impromptu yard sale. Did pretty well, considering. 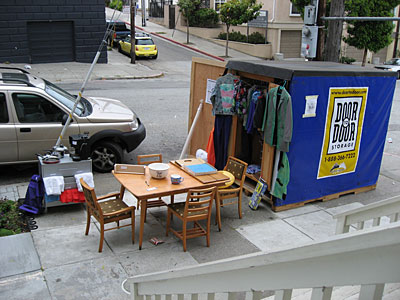 The best part about a yard sale is meeting the people who happen to want your stuff and telling them the odd story behind it. (I don't know about your stuff, but mine all seems to have a backstory.)

Anyway, finally closed up shop and just left the "free" box outside. After a decent interval, decided I'd better bring that in too since the neighborhood already looks derelict enough without my help. Found 3 items added to the box. Don't know why I should be surprised, but thought that was funny.

Guess I'll have to go to the San Francisco Really Really Free Market this month. Somebody must want this stuff! 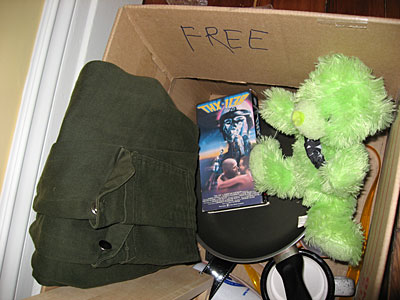 Wow, at our house that stuff would go in a second. It usually takes around 15 minutes for free stuff to be taken away, even when not labeled free. Just got to put it up on the curb.

This is totally unrelated. Why do the worst automotive trends always seem to originate in the bay area? 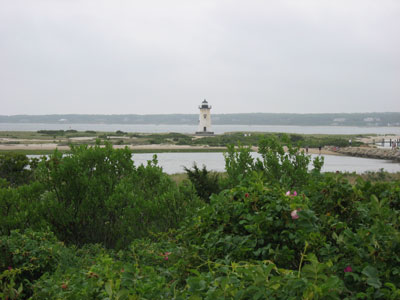 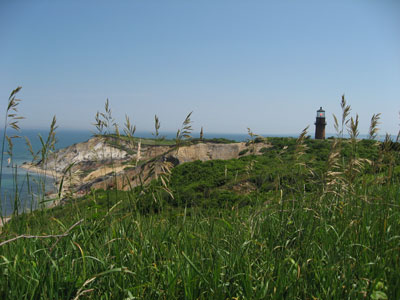 I got to bunk with my nephews for the week. Here's the fort my roommates made in our room. 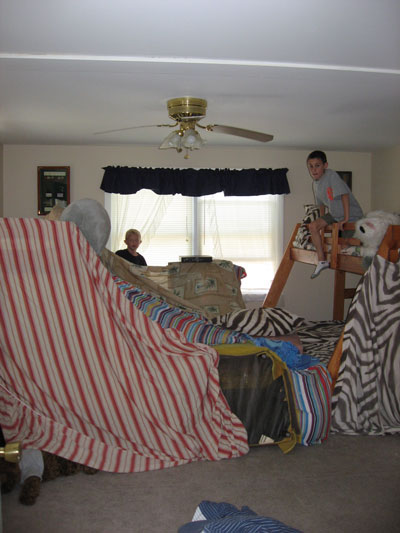 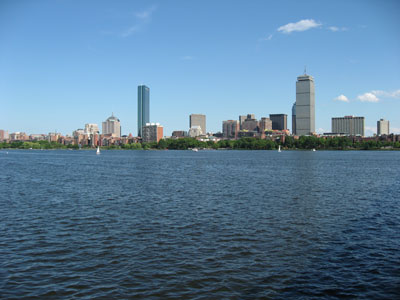 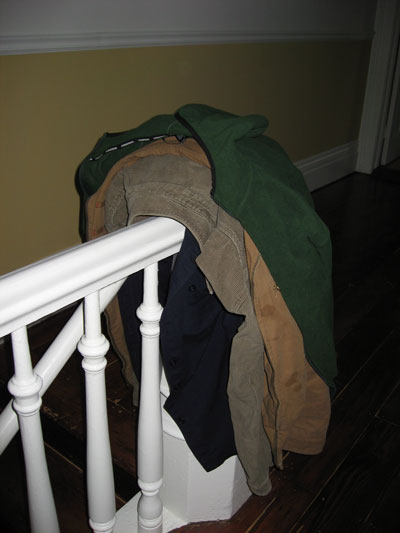 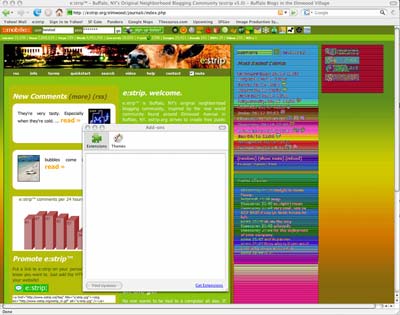 ok well it's not psychedelic for me in firefox, either- v. 2.0.0.4. But I don't use firefox that often, and thus haven't installed any add-ons or anything.

Twisted is using firefox on mac os x. So it would really have to be firefox to be a meaningful test.

that test page to me just brings up a solid red box that says 'hello' in black text and that's it. nothing psychedelic. (this is safari 3b on OS 10.4.9)

It is definately a problem with CSS opacity not being displayed right on your computer as we discovered with this simple test page :::link::: with CSS opacity. Does anyone else see it all psychedelic?

NExt step would be to totally trash all traces of firefox, throw out the application folder, delete any prefs. Then go ahead and redownload it and try.

I would say to take it to the apple store but they are going to tell you they don't support firefox.

...is apparently in full swing. better get out here quick, (e:paul), haha. 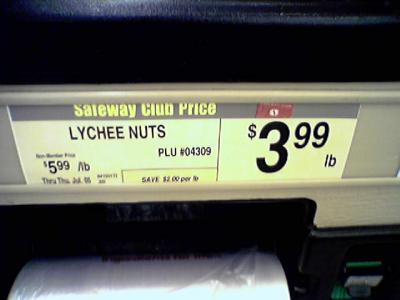 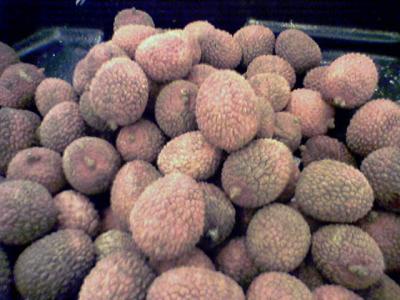 p.s. -- I disabled ALL my firefox add-ons but everything's still smutchfaced. Please don't make me uninstall all of them, sigh.

They look like the eggs of some interdimentional being. But oh good lord is their taste outherworldly good!

This is so freakin' awesome. 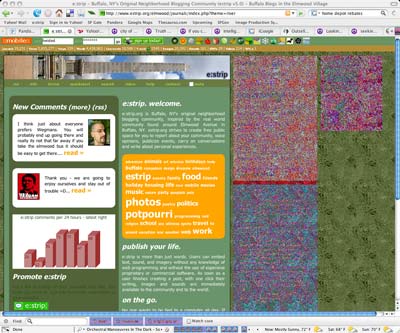 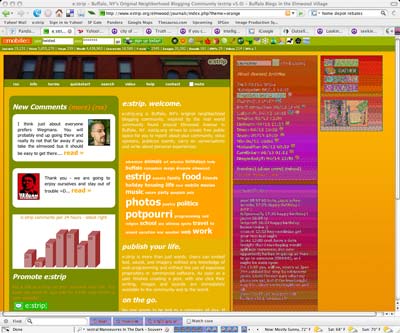 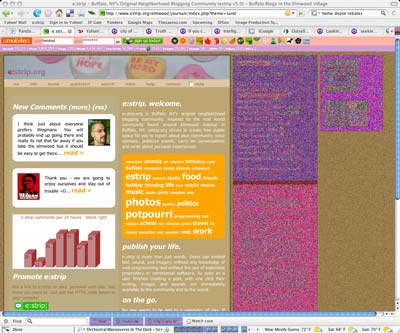 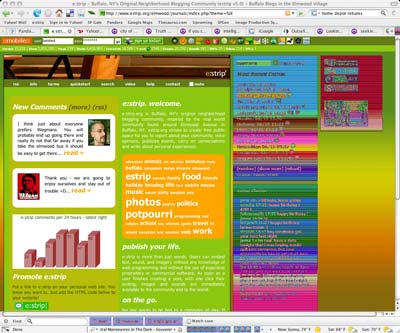 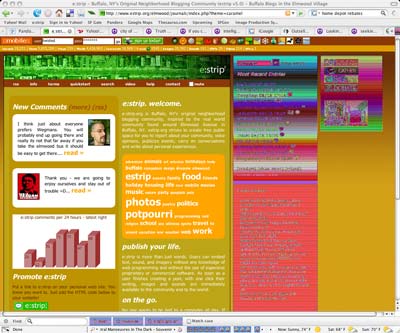 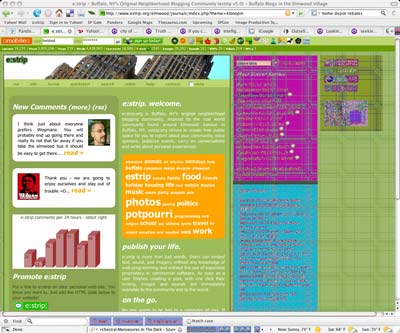 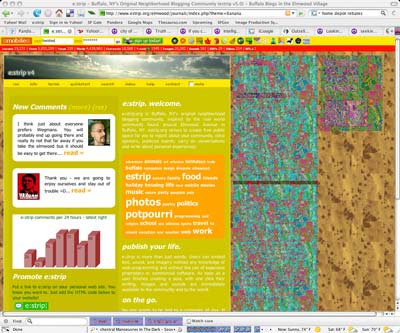 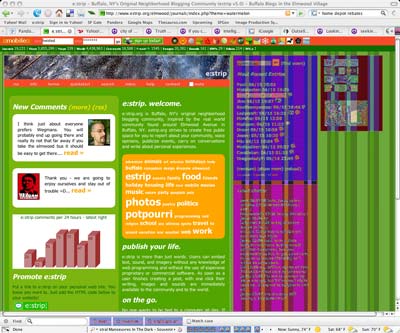 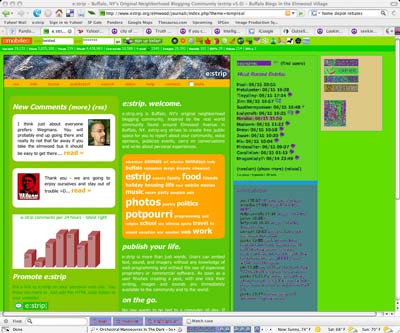 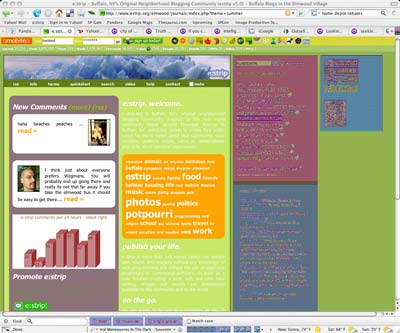 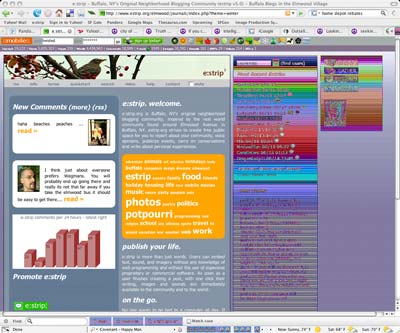 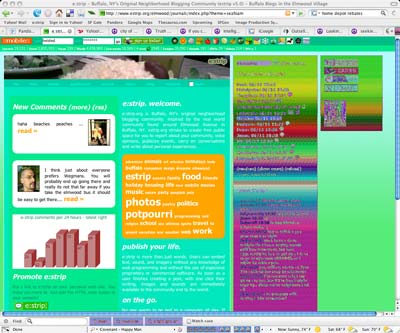 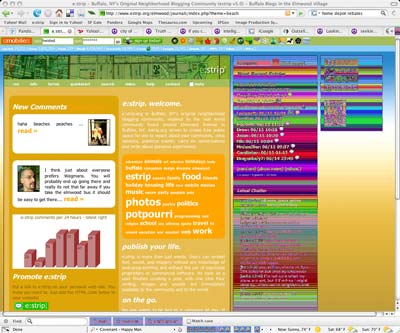 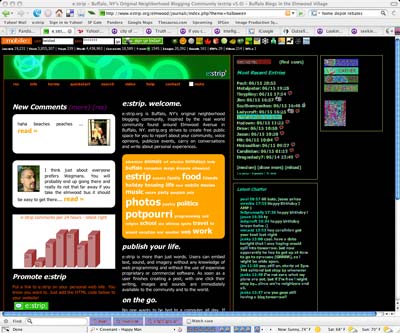 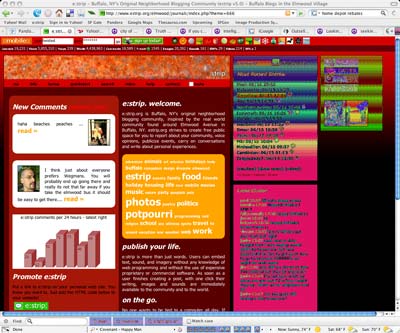 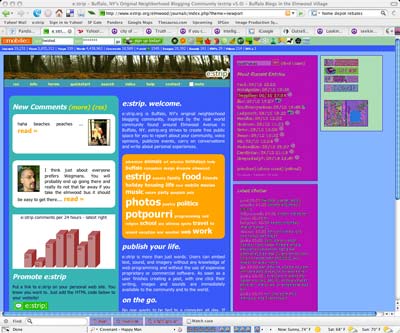 I've decided it's a feature, not a bug, haha.

I thought of that too. But it would have to be pretty strong stuff to project my altered images onto those screenshots. ;-)

Thanks for your help Paul. I'll start disabling my Firefox add-ons to see which one is the culprit.

After some testing we discovered it is her computers way of handling CSS opacity. Does anyone know what could cause this. It doesn't happen to her in Safari and it doesn't happen on our mac in firefox.

I appreciate the humor in your user pic!