(e:j3sse), why do you send me links like this? you know my weakness.

now you tell me.

INDULGENCE IN THE PARK

I don't think Alameda is ready for that.

This[inlink]news,597[/inlink]is why I could never be a parent. There is no way I could deal with the possibility of seeing someone/thing I love get messed up beyond recognition and have to sit by helpless. I totally give you parents out there credit. I am a coward when it comes to that. 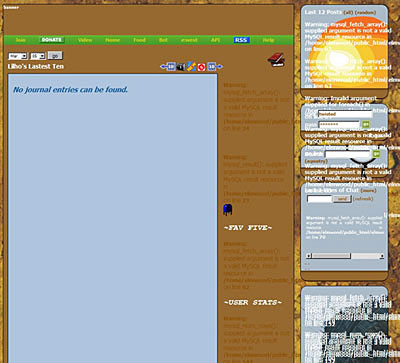 Luckily everything turned out ok. This time.

"This" mostly happened while I was out chalking [search]chalk[/search] the sidewalks of Alameda for / alamedalink. I decided to concentrate on places where people have to pause for a moment - bus stops, newspapers stands, crosswalks (people actually wait for the pedestrian light here - it's so cute), laundromats, mailboxes, pay phones, casual carpool pick-up spots (talk about ad-hoc community), bike racks, ferry terminal, dog parks. I've got to conserve my minimal resources right now. I might get more creative

later. I'm only one person fer cryin' out loud.

(e:uncutsaniflush) - that house[inlink]uncutsaniflush,28[/inlink] is gorgeous! I hope it works out. My experience has been that any acquisition with a past - be it a house or a significant other - will have some undesirable baggage. But it can be worth it. You will know the answer. From that picture alone (if it weren't for the snow) I'd be ready to buy it myself, sight unseen! I hope the inspection goes well. If not, better to walk away. Remember, you are in the driver's seat. If it goes well (which I hope it does) I wish you much happiness there!

I looked at a house across the street from the C&eacute;sar Ch&aacute;vez Elementary School in the sunny Mission district 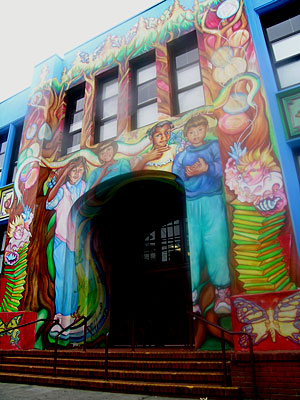 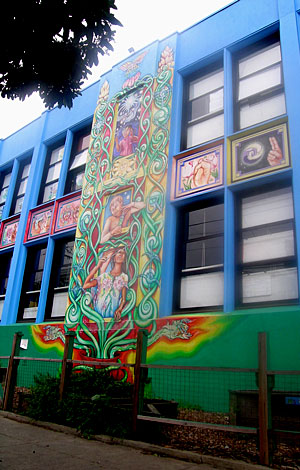 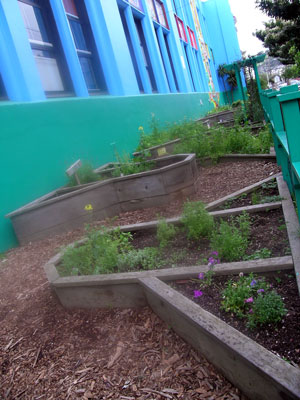 The raised beds are part of a program at the school known as "Natural Perspectives."

Funded by the Center for Ecoliteracy since 1996, Natural Perspectives works toward an integrated curriculum at the school, while it gives students a hands-on way to learn science in a natural setting.


I would definitely have to brush up on my Spanish if I moved there.

Could you supersize that for me?

Now there's an interesting statistic for you.


Might seem unrelated, but this is from the same article:

Rauzon, who designed the "corm condos,'' tells us that without the replacement perches that we told you about last Sunday,

the old Bay Bridge cormorants might choose to relocate to the Richmond-San Rafael Bridge, where a cormorant colony is already perched.

But no matter what we might think, the fact is the birds are covered by the federal Migratory Bird Treaty Act -- which requires nesting birds get new perches.

I'm on a serious New Pornographers

kick right now. Since everybody already has every MP3 under the sun - making mix CD's obsolete - here's a short playlist instead.

When the contact high from the real life adventures wear off,
you find, in the tiny moments that bomb, your old files rain down from the sky.
And would they fall down, like cymbal crashes, would the alarm bell sound?
Would your eyelashes keep all this in time? If not, I won't mind...

it can be impractical.

So can you tell me why in every version of the events shown here,
there's another season that crawls by like years, from blown speakers clear?

It came out magical.

Just a contact high, one in every mood I've ever declined to fight, one in every single exchange you might find. From blown speakers, time came out magical.

It came out magical, out from blown speakers.

Some well-known and lesser-known reasons to visit San Francisco.

A few highlights
Conservatory of Flowers

Since 1879, locals and visitors have marveled at San Francisco's Conservatory of Flowers, the oldest glass-and-wood Victorian greenhouse in the Western Hemisphere and home to more than 10,000 plants from around the globe.

Many people's favorite part of the park, this was originally built as part of the sprawling Midwinter Fair. Begun by an Australian in 1894, this intricate and private (depending on the season) complex of paths, ponds and a teahouse features native Japanese and Chinese plants. Also hidden throughout its five acres are beautiful sculptures and bridges. Makato Hagiwara, a Japanese gardener whose family took over the garden from 1895 to 1942, also invented the fortune cookie.

Map of the Park

Notice how it ends right across the street from the Pacific Ocean. Very handy after biking/rambling through the park all day. Also, many great picnic spots and photo opportunities.

for electronic gadgets, anime, video games, Asian art, anything made in Japan. I like to check out the origami papers and pick out some mystery groceries for a picnic later.


The Jazz scene on Fillmore began to define the area, with greats like Duke Ellington and Billie Holiday frequently playing clubs in the neighborhood.

The Haight, home of hippiedom

And many more. That's enough for today though. Check ~Fav Five~ for updates.

It's actually just some PHP trickery that displays whatever you type into the URL as the last word. But anybody who would like to endorse the site this way, please feel free!

This message brought to you by the alamedalink chamber of boobsterism...uh boosterism!

We heard from people that they have a strong desire to stay close to the people who are important to them, but at the same time they didn't want to feel like they were exposing themselves online," said Julie Herendeen, Yahoo's vice president of network products.

Although many critics continue to dismiss blogs as mostly prosaic rambling, 27 percent of online adults in the United States read them and another 7 percent write them, according to a study by the Pew Internet and American Life Project.