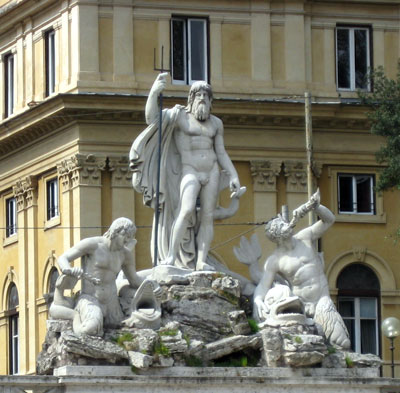 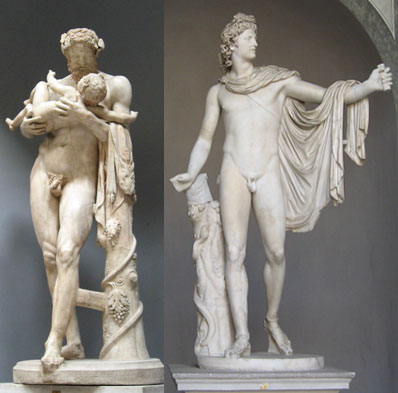 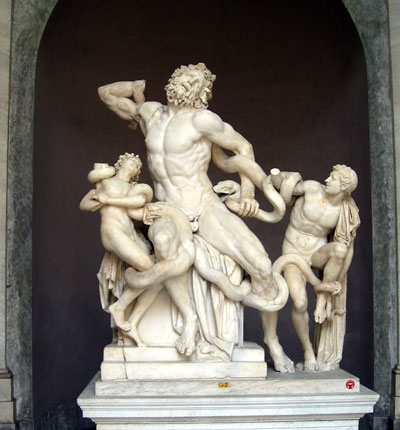 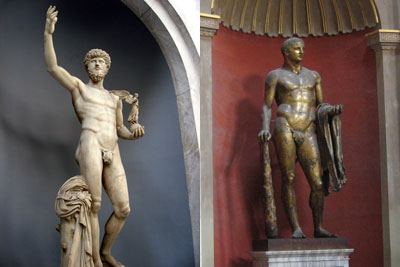 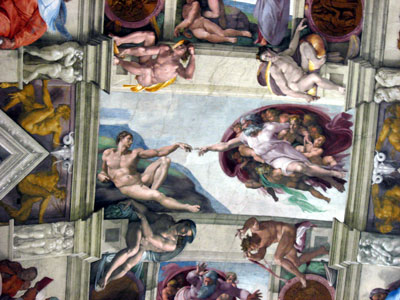 Now that I got that out of the way...

It's pretty freakin' gorgeous too. Just about anywhere you look is a picture postcard. Where else can you step out of the Metro station and have your jaw drop at this awe-inspiring site? 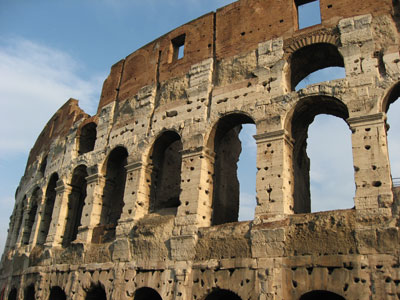 The origin of stadium seating

The coast is beautiful too: 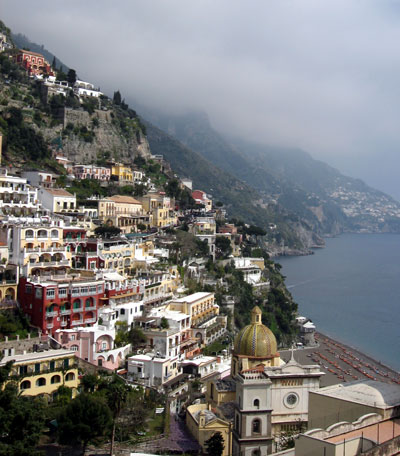 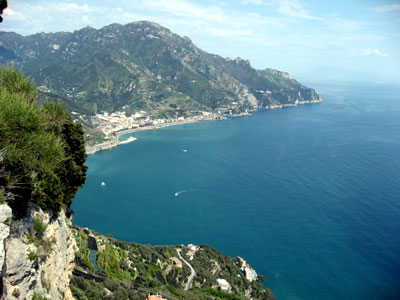 Reminds me of another hilly location with a Mediterranean climate on the coast. You'll just have to guess where I mean. Some people might complain about the hills, but I think they're worth it.

Nice Pictures thanks for sharing.

To think, if John Ashcroft were king of Italy he would robe all of those lewd, lascivious statures.

awww...i havent' been there in 12 years! did you have the super delish pizza folds at the shop by the colosseum?

(I love that statue with the snake though... the Laocoon maybe?? something like that.)

I am so jealous, it has been so long since I have been to Italy.

Oh... yeah... right. Welcome back, too. And thanks for posting pics of other things. At least the hills are big..

I was going to buy a cheap knock-off, but the real thing was on sale if you bought two. So I'm double-dosing on hot apple cider night-time formula, and zesty orange mad-dash to the airport formula. (e:Paul), I'll leave the rest for you to take before you fly out here. And some for (e:Lilho,444) ! Get well soon!

p.s. - if anyone's going to be out by the airport this Friday - say around 9:16 p.m. - maybe I could catch a lift into town and save PMT a trip? Or if (e:Dragonlady7) is working, maybe I could hang out at the bar until you get off and catch the bus back with you? I'll pretend I'm on public [inlink]rzoo,7[/inlink] transphere!

Just thought I'd ask, since I haven't even gotten there yet and I've already been way too much trouble. ;-)

can i come too? im always the airport cabby. ifi go, at least i can pretend im going somewhere/coming home from somewhere...

I work until 8 that night... but I'll be in the US Airways Club, which is only open to members...

But! I have the car, as (e:zobar) is working from home this week.
But I have to do a review of a restaurant and I was going to do it after work Friday, which is why I switched with someone so I could get out at 8 instead of 9. Gah! If I'd known...
Hmmm... Maybe I can do the review tonight, if I can get out early enough.
But maybe someone else would have to dither a lot less over picking you up. Hmmm. I have to

One concrete bit of advice I have is that you NOT mix up Airborne in a nice glass cup because travelers do that in my bar all the time and I hate that shit and it doesn't wash out. Use a paper cup unless you have a kickass dishwasher or don't mind doing some scrubbing. Eugh!!

What are you talking about. You are not too much trouble. I will definately be there to pick you up.

My Own Personal Spammer

One thing I forgot to mention about Mr. Coffee. He likes to change his email display name. Frequently. He started out as John Stoan. Then changed to Bonham Silt, Buckeye Standy, Blowfish Stillwater, Bongos Singing, and now Banks Studebaker. What the hell is up with that?

So, I keep trying to book my flights. Which is another way to say, I haven't yet booked my flights. I was a little worried about trying to book less than 2 week in advance. If I could just nail down an itinerary before it dematerializes, this still could work out ok. Although that's still not a guarantee. Even c-list celebs have to keep an aura of mystique, haha. 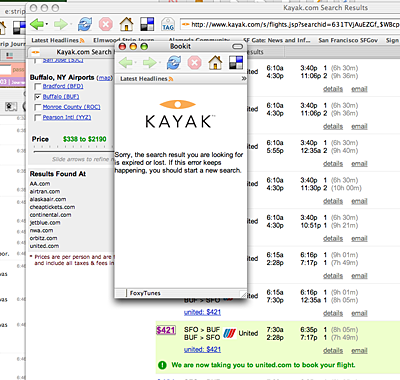 I am still hoping for an appearance. No pressure but if you don't come the party is cancelled ;) Just kidding.

tomorrow night. It's a sacrifice I'm willing to make for a friend, haha.

Believe me, I realize how lucky I am my parents set a stellar example to "live for today" even with four kids. I took it for granted as a kid, but now that I'm of the age of deferred gratification, I can see how valuable a lesson it really was. My mom died at age 60. If they had put off their dreams of traveling until they retired, she would have missed out on Ecuador, the Galapagos Islands, South Africa, Australia, the Soviet Union, Yugoslavia, just to name a few. Of course, if it had been left up to Dad, she would have spent her lifetime vacationing in a tent [inlink]twisted;229[/inlink] within driving distance of home (albeit, with Dad driving, that could be a long way). But she wisely became a travel agent when they moved from Baltimore to South Carolina, and from then on found an affordable way for them to travel.

Unfortunately for me, I had already left for college by then. So my youngest brother was the benefactor of Mom's resourcefulness. Yeah, I still haven't been to South Africa, Australia, Ecuador, the Galapagos Islands, among others. But he has.

So all I'm saying is, how stupid would it have been to wait? I'm not saying everybody's thing is to travel. But if you want to see the world, just get out there. We're all going to leave this planet one day. See it before then if you want to.