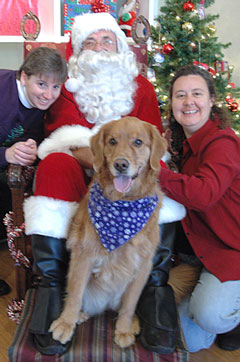 Ok - I can finally make this public. Kathy sent it to me to sharpen up, but I coudn't post it at the time because I would have "scooped" their Christmas card. Is that a great pic or what?
'
p.s. - I made Maggie''s scarf. They're snowflakes.

(I can't take credit for the title, I stole it from this article about the lack of gay sex in movies. Grilled cheese reference is at the bottom.

Just as I'm giving up on buffed Greek gods, I find this. Remember that 10-year-old grilled-cheese sandwich found in Florida? The one embossed with an image of the Virgin Mary? No? It was up for auction on EBay. Still no? You people aren't reading the right news sites. Anyway. I've just read that the Holy Toast finally sold for $28,000. The Virgin's suffering face is still discernible and remarkably mold-free, considering its age. Stop shaking your heads, o ye of little faith! Google the words "Mary cheese sandwich" for a slew of reports.

He got my bday package[inlink]twisted,71[/inlink] today. As part of my new "it doesn't have to be complicated and difficult in order to be good" policy, I took the easy way out and just bought him some stuff at my favorite store. He liked it. 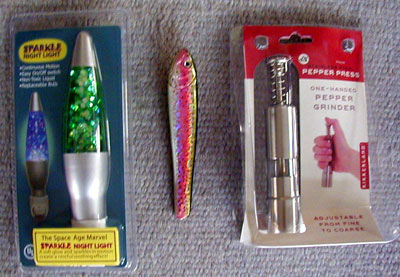 The lava lamp nightlight is already plugged in, and he says it looks cool. Also filled up the pepper grinder - still trying to figure out how to adjust the coarseness. Says he really likes the fish box cutter 'cause he likes to keep one on the counter and this one looks fun. So I guess I can chalk that all up as a success.

Other topics covered:
He ordered VOIP (voice over IP) from vonage

Adjusting the tension on my old sewing machine (which he has)
Bike lights, tea cozies (again), Thanksgiving

My favorite store in Cambridge no longer carries the glow-in-the-dark koosh ball earrings. Why on earth would you discontinue an item like that? Luckily my reconstitution efforts have been somewhat successful. I'm going to have to attach the earwire some other way though.

Darn, I forgot to remind him to make himself some crÃ¨me brÃ»lÃ©e with the blow torch I got him for his birthday last year. Why did I ever break up with a guy who might have made me crÃ¨me brÃ»lÃ©e ? I must have been out of my mind.

Last year was a 'milestone' birthday, so I did the card thing (tying the blowtorch in with his toaster fetish). 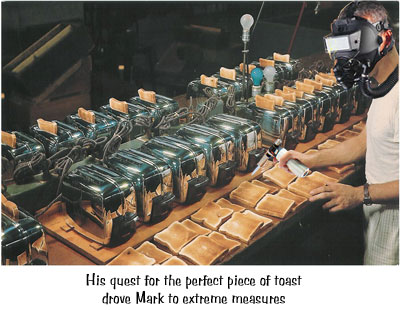 I don't know what it is with him, but he turned around and bought a mini-blowtorch for me the last time he was out here. I'll never figure him out, but I can't seem to stop trying.

show was a lot of fun last night. The girl standing in front of me asked if I was Penelope's sister (the lead singer). She said I look just like her. I really couldn't tell you. 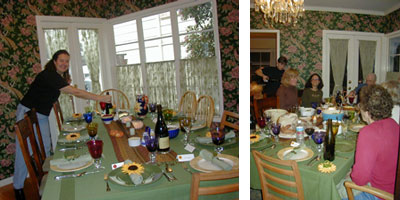 Sam helps herself to an appetizer / Nosing around the table 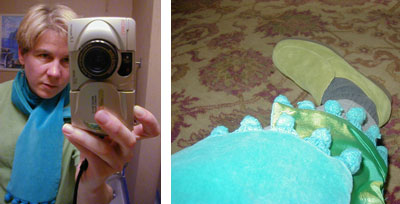 I was there too. These self-portraits are not working. Could I look any happier? 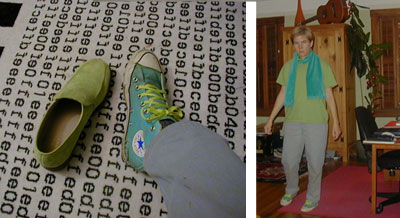 Footwear change and it's off to Popscene[inlink]twisted,63[/inlink]. There's that thrilled expression again.

Sorry, that was a lot of pictures.

When I walked into Popscene and they were playing "Bizarre Love Triangle" (New Order) I knew I was where I'm supposed to be. My calves are killing me today.

The Avengers at Cafe du Nord

tonight. I'd better start making some money. Anybody want to buy a PJ Harvey[inlink]twisted,63[/inlink] poster?

How'd the (e:trotters) do yesterday?

After my estrip binge yesterday, I'm now on a restricted diet. Probably not a bad idea anyway going into the holidays, since I'm already late opening Santa's little workshop this year. Not good at time management.

group trip to India and travelled with a small group of people for 2 weeks. They all wanted to exchange information to stay in touch, and he flat-out told them he had enjoyed spending time with them, but he had no interest in ever hearing from any of them again. My dad is not known for his tact.

So far today I've received over 15MB of digital pictures of people's kids, dogs and cats. None of them was scaled-down to email-appropriate size. And that's not counting the digital double prints of Mittens, HotDog and CoCo because she didn't think the first set went through. 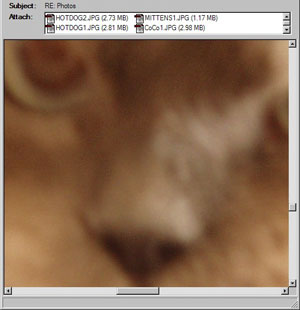 This is about as much as fit in my email display window. Now, why on earth would I want to open that?

So, am I supposed to send something in return? I have no kids, dogs, cats, gerbils, fish, turtles, parakeets, or tadpoles. Although I've had all of those (except kids) in the past. Maybe I could russle up some stock footage.

Something weird is happening with my phones. Just thought it was a random fluke last night when I hit some key combination that locked my cell phone. Which was a pain because I had no clue what the unlock code was (hint: try 9999 or the last four digits of your phone number if it ever happens to you). Anyway, didn't think much of it until a cop showed up at my door this morning. Asks me how I'm doing. I say fine. He says, you called 911? I say, noooo...(!) Turns out my landline called 911 w/o me. That's the number they traced it to.

The good news is I figured out how to turn the shutter sound off on my cell phone camera. Now I don't have to pretend to sneeze when I take a stealth close-up.

Last post today, I swear. Guess I had some pent-up journaling after my four-day hiatus.

Phone pix reminded me - I forgot to tell you about my Rave experience last Saturday. I was in this all-day class 10am-midnight Thurs-Sun (I don't want to talk about it), and ended up getting invited to a Rave party by this guy in the class.Totally out of the blue. Sensing some weird [inlink]terry,361[/inlink]karma, naturally I said yes. 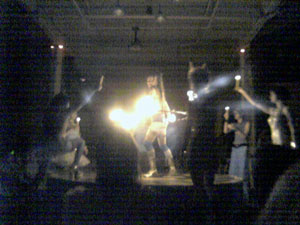 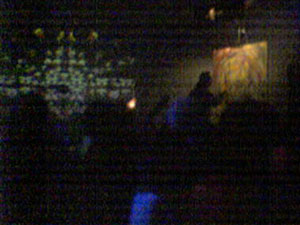 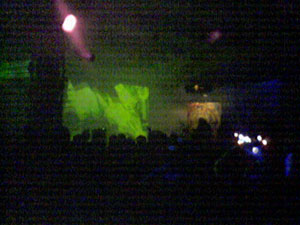 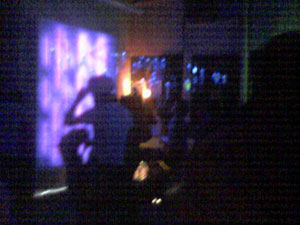 I got in for free since my newfound Rave buddy was scheduled to start manning the door. That also meant I was cruising solo again. It was fun, but I only stayed for an hour and a half. I'm no spring chicken you know.

Stopped at the local hardware store on my way back from the farmers' market. They have everything.

Let me know if you need anything for the float.

The right mix tape [inlink]drchlorine,59[/inlink] could surely drill a link to my reclusive heart. For what that's worth. ;-)

I've been a mix-tape giver and receiver since way back when the needle met the vinyl. I wasn't as prolific as I should have been, considering the profound impact the medium has had on my life. But I sure put a lot into the ones I made, and played the hell out of the ones I received. I have to digitize those for posterity before they wear out.

Probably the biggest mix tape project I ever did was for my college roommate's wedding reception. We lived together, went to classes together (both journalism majors), and worked the 4pm-1am shift at a typesetting shop together. Oh yeah, we also both worked on the school newspaper five days a week. No wonder I didn't graduate.

She asked me to handle the music for her wedding reception in Rhode Island, including schlepping my stereo and speakers down there and wiring the place up. I was a nervous wreck. It all went great, except her twin brother thought it would be funny to play a practical joke on her 10 minutes before she was scheduled to walk down the aisle. He told her I called to say I got a flat tire and wouldn't be able to make it. Brothers suck. Luckily I walked through the door of the church not long after that.

Come to think of it, my copy of tape 1 from that series got stolen along with my car stereo. Cripes - take the stereo already, but have the decency to eject the tape first!

One of the advantages of working the night shift at that type house was being able to print out fancy labels for my tapes. Little did they know that's why I wormed my way into being the night systems manager - so I could run off my own type. You guys have no idea what I'm talking about. This was an era before PCs and personal printers. (gasp!) Ok, I'm scaring the kiddies now. Sorry.

I know - a fat lot of help I am chiming in from the sunshine state (or is that Florida?), but just the thought of estrip going away makes me abandon all hope for my world. Maybe there's some perverse reason we let ourselves sink to the depths of despair before we'll attempt to turn it around. If so, I hope we're there (e:peeps) - I don't want to go much deeper than this.

I'm totally inspired by (e:DrChlorine) and (e:Ajay) 's posts. Seems like one recurring theme is loneliness, especially this time of year (I'm with you on that one). Again in the fat-lotta-help-I-am category, maybe think about making some peep2peep face2face encounters happen. Throw a party, and don't forget to invite the (e:peeps2B) . Or set up a coffee drop-in date at a local hang-out. Put it on the (e:EventCalendar) and make sure you've got those estrip flyers with you to pass out.

"Don't you know that it's time to get on board...and let this train keep on riding, riding on through?"